DIY Van Conversion Done on a Budget for Full-Time Living

Is it a goal of yours to do a DIY van conversion at some point in your life? Chances are if you’re here, that rings true to some degree. Today I am going to take you on a written tour through my tiny home on wheels and share the build in-depth.

This home is full of quirks and was built on a budget of $15,000 USD keeping reclaimed materials in mind.

Prior to becoming a DIY van conversion, this van was used to transport prisoners to and from jail. Its entire interior was previously solid metal, with an actual jail cell inside held in place by extremely strong (and hard to remove) rivets.

This type of past gives my home a unique and hidden history that even I know nothing about. Frankie is a 2006 Dodge Sprinter Van 158′ Wheelbase that I have converted into my full-time home. The style of the interior is very cosy, with hints of vintage throughout the build. I designed the inside to be functional but also homey, all while staying on a budget that would allow for financial freedom once the build was done. 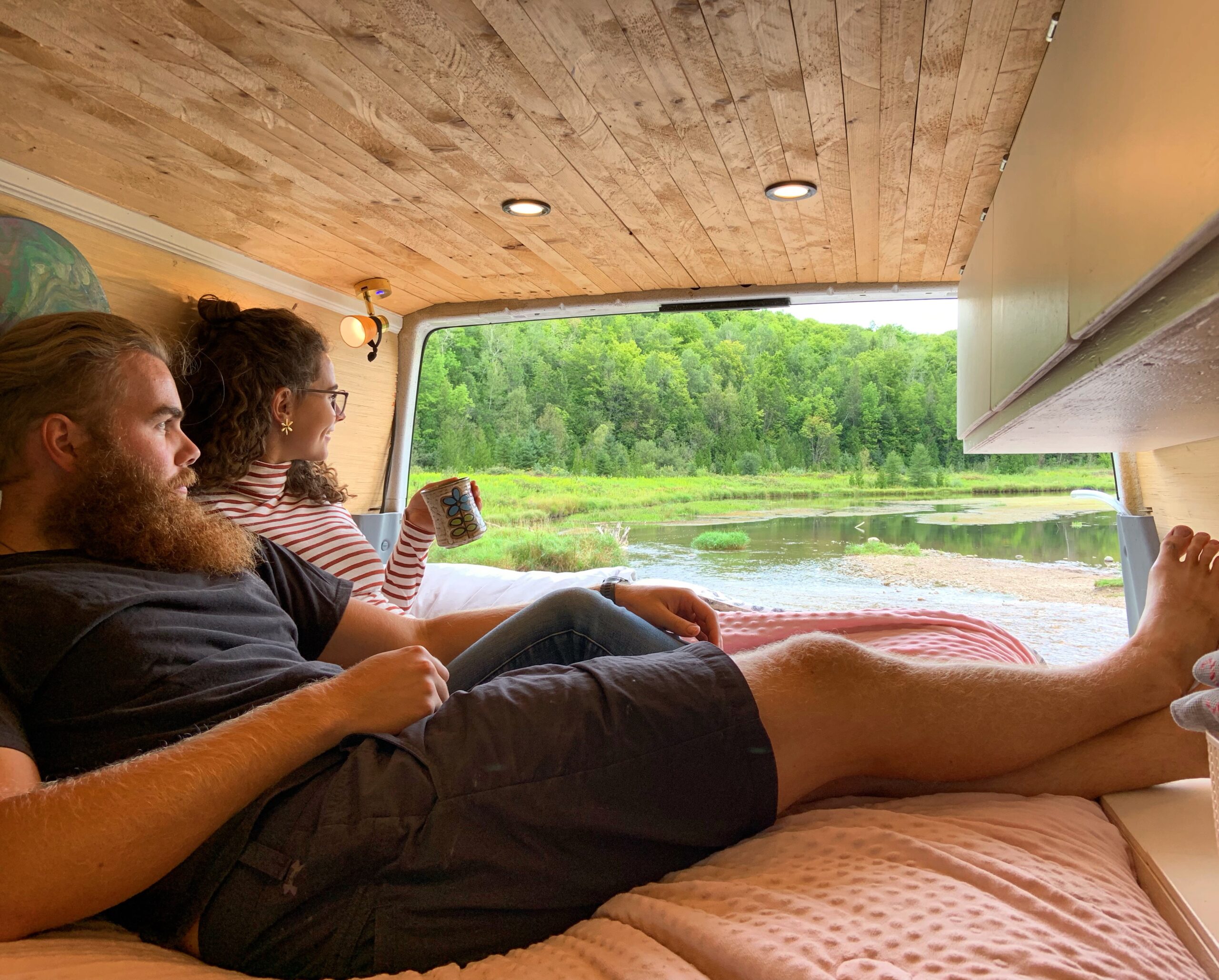 Hi! I’m Logan, a full-time vanlifer from Ontario, Canada. I live in my self converted sprinter van with my partner David. Bella is our van-dog and she comes on as many trips as her old bones will allow her to.

It’s been about a year and a half of full time living in this van since I first bought it  — I began converting it 3 years ago.

Why move full time into a van?

The reason I initially bought a van was to put myself in a better place financially. I knew that I wanted to have some sort of stability in terms of a home but also wasn’t ready to stay in one place or use my hard earned money to rent out a space that I didn’t fully own.

Vanlife gave me the best of both worlds, I was able to own my home entirely without going into debt for it, I could still travel and,  I didn’t have to pay rent!

Before I began building out my van I met my partner, David. He was totally on board with the idea of living a more nomadic, freedom-based lifestyle and cheered me on from the start. He also knew that I wanted this van to be mainly converted by me, as it was something I felt responsibly to accomplish myself.

Now, 3 years later he is living with me part-time in the van and is planning to make that full-time in the near future. For work, I own an online clothing and vintage goods reselling business and I also do various types of social media work. David is a freelance videographer and designer. We also have a youtube channel called This is Wild. 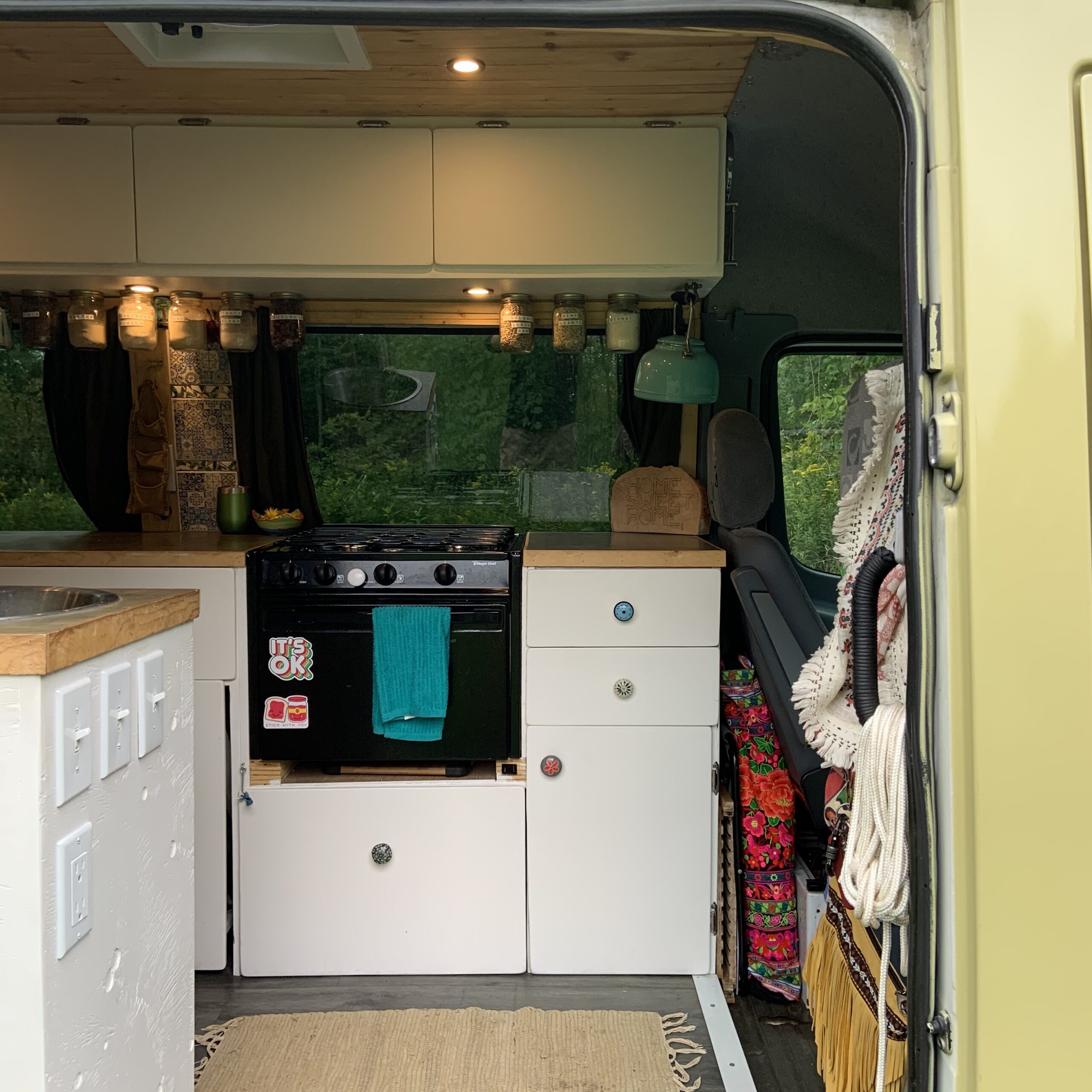 When converting the van I knew how important cooking and having a big kitchen was to me.

I am an avid herbalist and I love making tinctures, so having enough kitchen space to do that was very important to me. Therefore I created a counter out of parquet flooring, which I sanded and stained to be a functional worktop. On top of that, there’s also a 3 burner stove and oven combo which also stores the pots and pans. 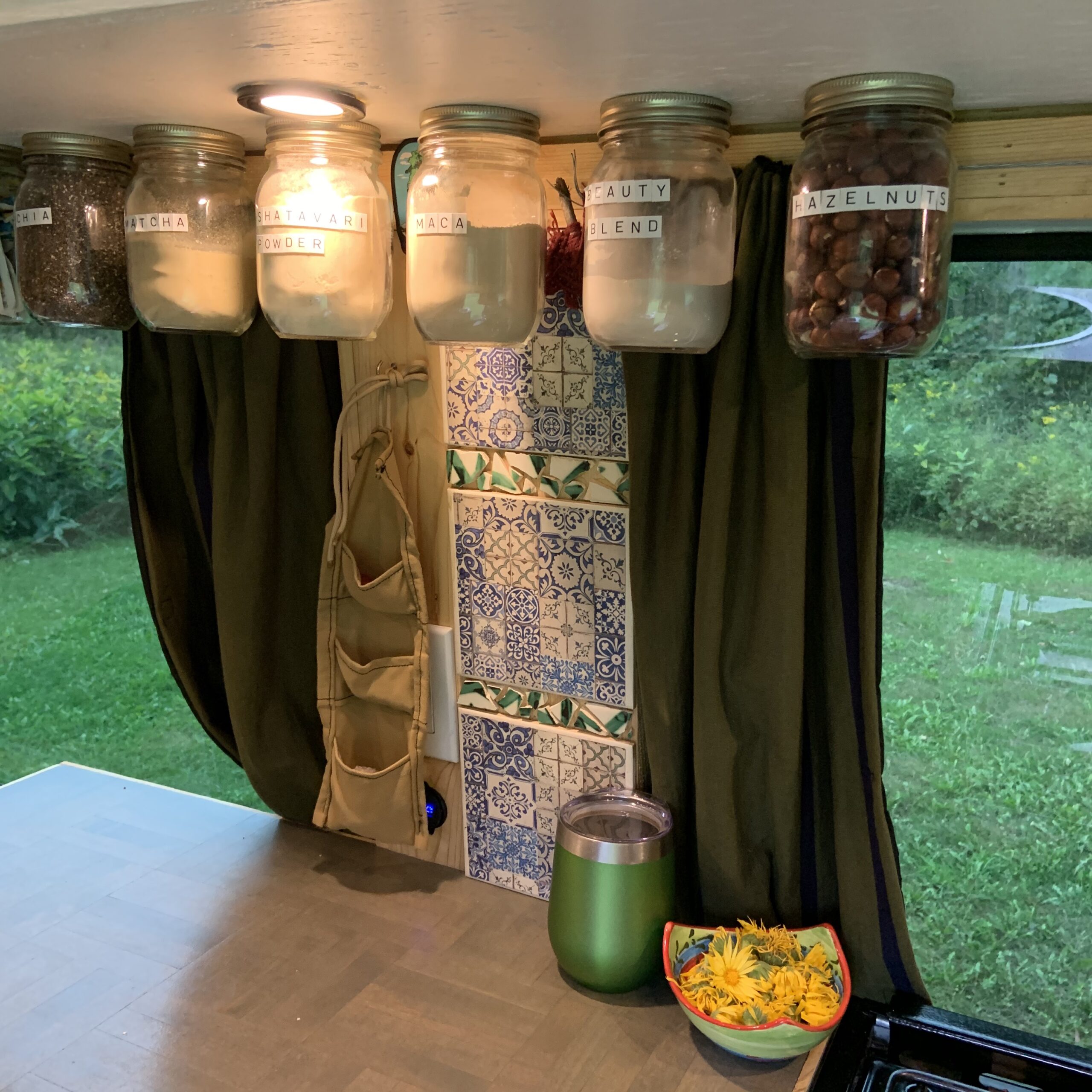 Many of the materials and appliances in the build are rescued from the landfill and have been repurposed in order to give them a new life in my home.

The stainless steel sink is a deep circular tub from a luxury spa. The oven/stove is from an old RV that had no use for it anymore. The fridge I have was bought secondhand from a man who had it in his sailboat. The wood used to make the cabinet faces were saved from a construction job site that was going to send it to the landfill. The cabinet knobs are from a local vintage shop.

By using all these bits and bobs I was able to cut down on costs but also bring more character into the space.

Features of the kitchen include 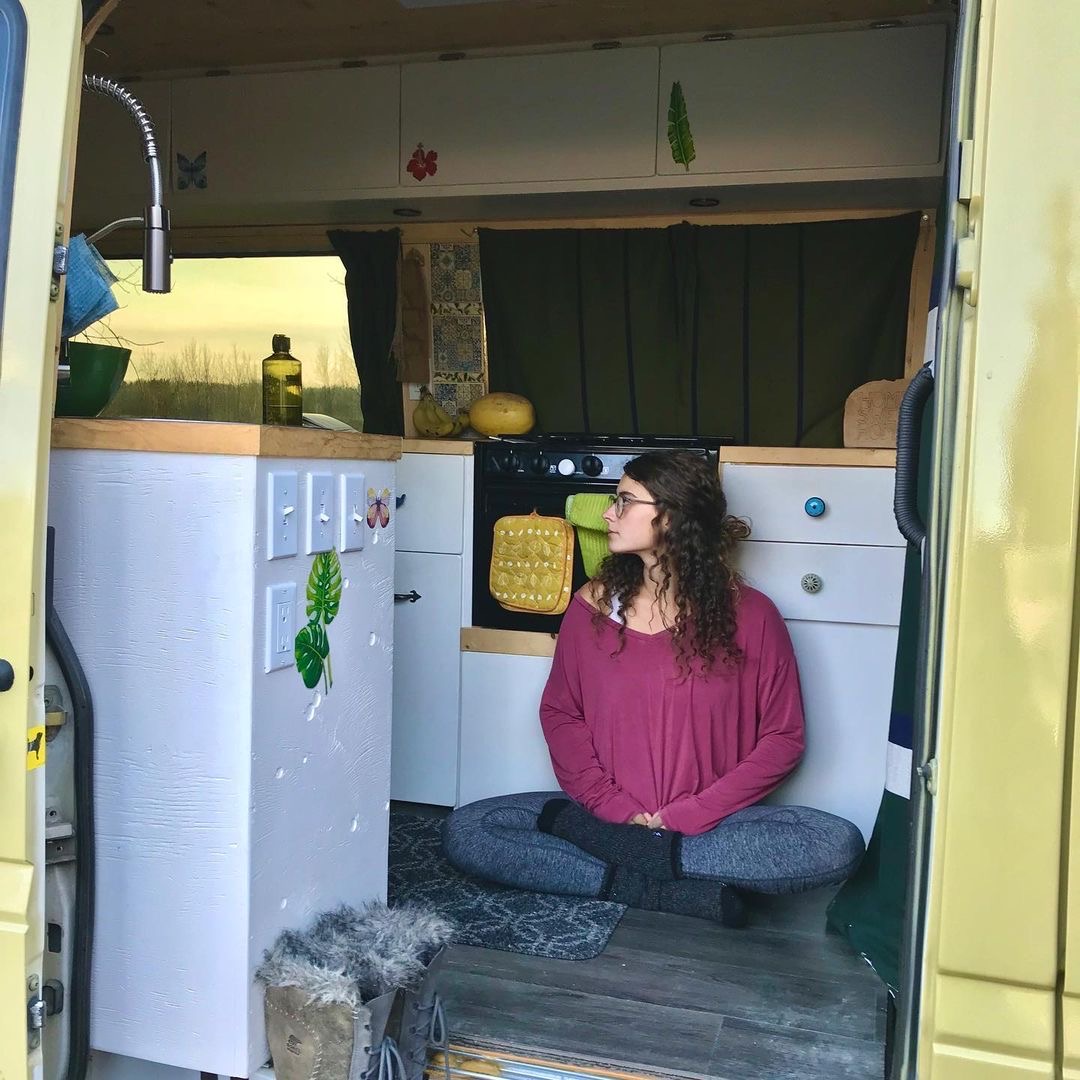 The living space also doubles as the office. It is from here that we eat all our meals, watch all movies on the projector and work full-time.

There are 2 benches that face each other with a table sliding out from underneath the bed. There is also a bench on castor wheels that slides out from under the bed and can become a third seat or be put between the benches to make a couch.

The sliding bench also doubles as dirty laundry storage. Underneath the bench on the driver’s side is a composting toilet that I made from a separate urine diverting seat. Under the bench opposite of that is where David stores all of his clothing. 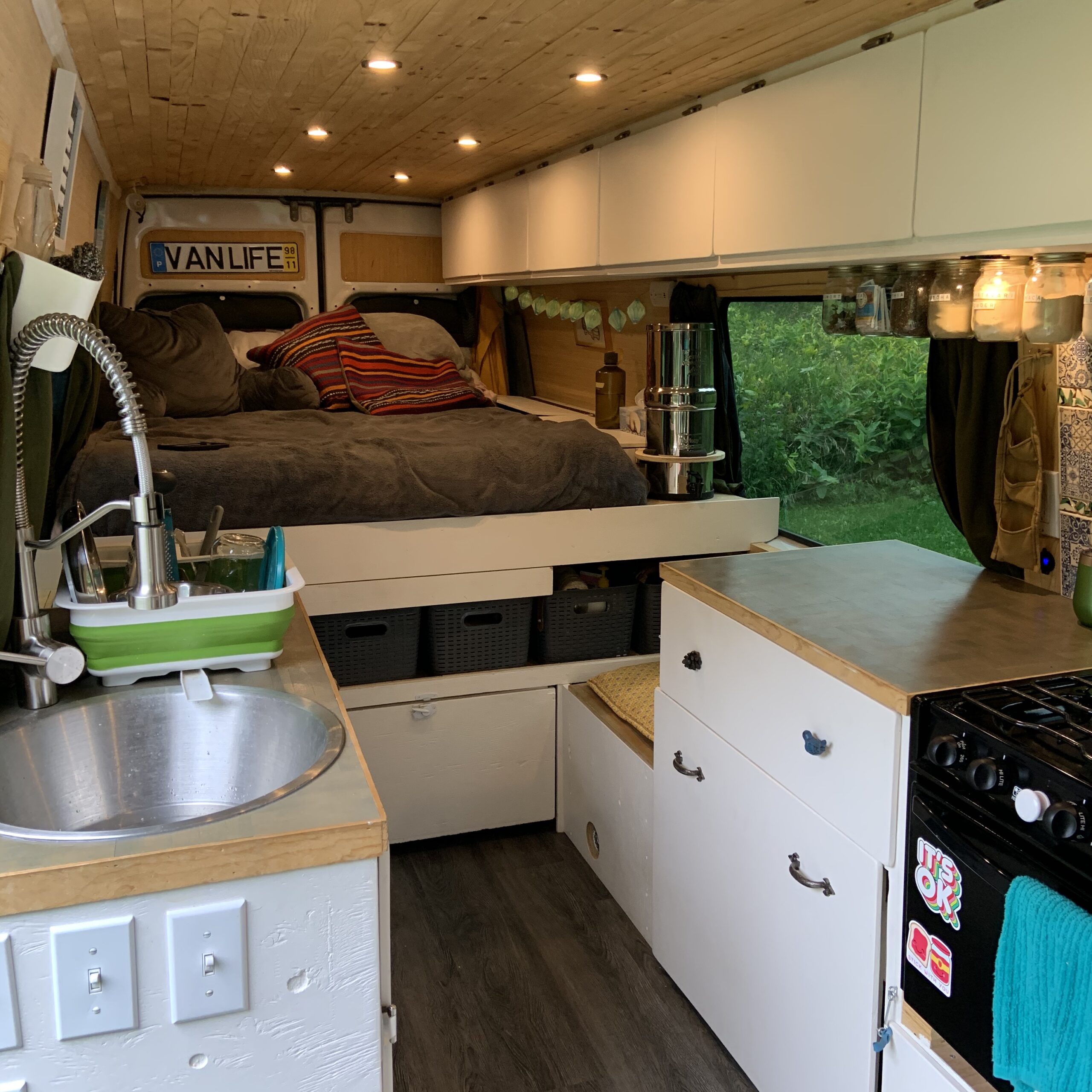 There is a large shelf underneath the fixed bed that goes back the length of my arm. It has many plastic bins that are filled with spare food, sweaters, toiletries, and books. It is the collect-all-shelf and accounts for a large percentage of the storage.

This space is decorated with many different cushions and patterns that I have held onto over the years with the knowledge they would one day make a home feel more like home.

The cosy ‘bedroom’ in my van

At the back half of the van is the fixed bed, one of our favourite features. When building out the van I contemplated whether a fixed bed or convertible bed style was best. Ultimately I went with a fixed bed as it allowed me to not be constantly rearranging it and I was able to buy a very high-quality mattress to ensure a good nights sleep.

On the left side of the bed is a little cabinet for clothing to make up for the space that the mattress doesn’t fill. Above that are upper cabinets that I keep all of my clothing in. Going with a fixed bed was also important as it gives us a good amount of garage storage. 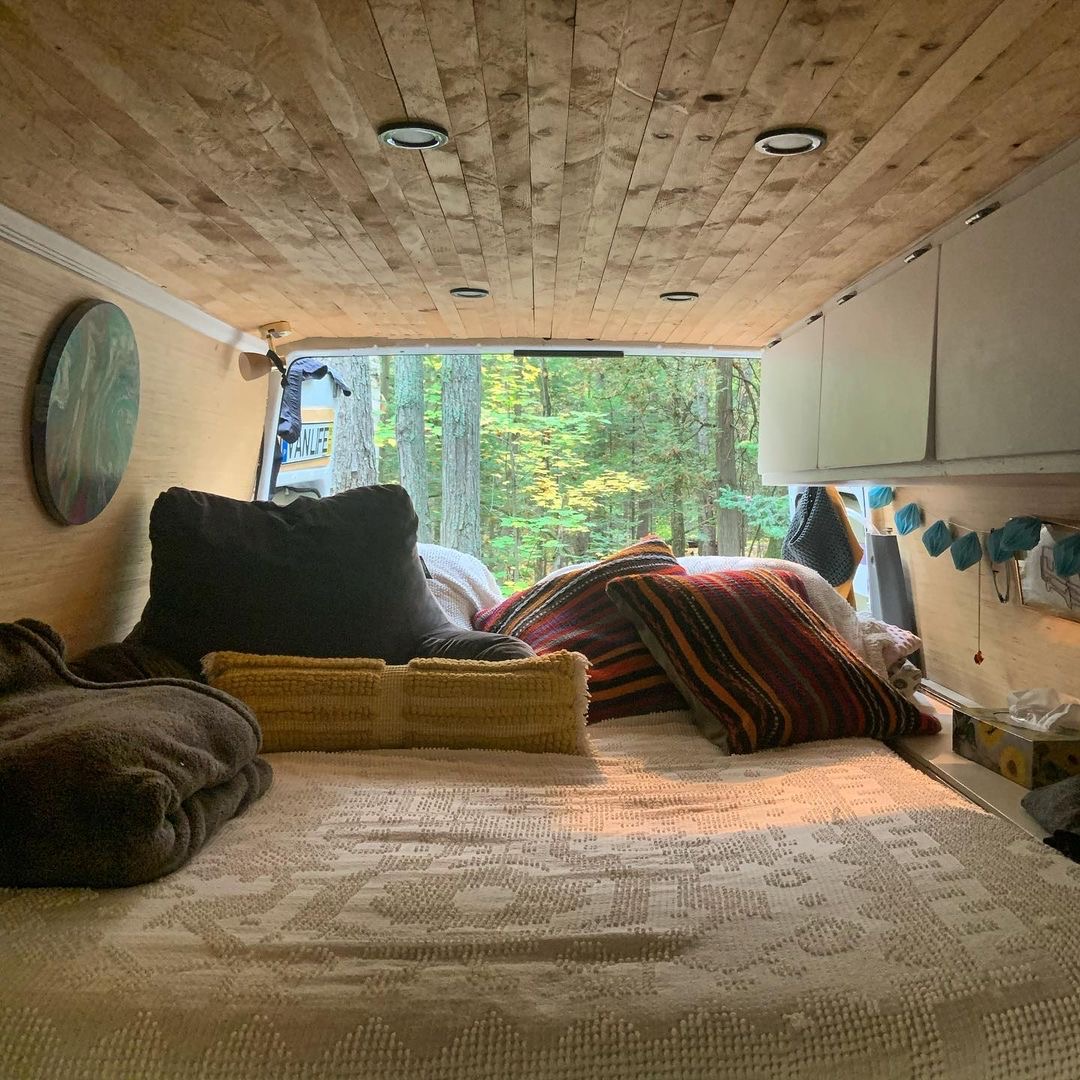 Having a toilet in the DIY van conversion was really important to me when converting. I knew that I would want to have something I could depend on in the middle of the night and on long trips. I mean, heading into a dark forest at 1 am to dig a hole just wasn’t appealing to me. Ultimately this is why I ended up going with a DIY compost toilet using a separate urine diverting toilet seat.

Since I have a long wheelbase van, I do have the interior space to house a shower. However, it wasn’t a main priority in the DIY van conversion and I was happy to make use of the space differently.

We are lucky to be around family and friends very often so we use their showers when needed. Whenever we are on a trip finding a shower is one of the simplest tasks on our list, we usually pay $5 to shower at a truck stop.

In the back of the van, under the fixed bed is the garage space. It houses the entire electrical system, batteries, as well as the 20gallon water tank. We store a bunch of tools as well as all of our camping equipment back here.

When going on longer trips it is very easy to put two bikes back here as well. This space has proven to be so useful for my business to store and transport the goods I sell. 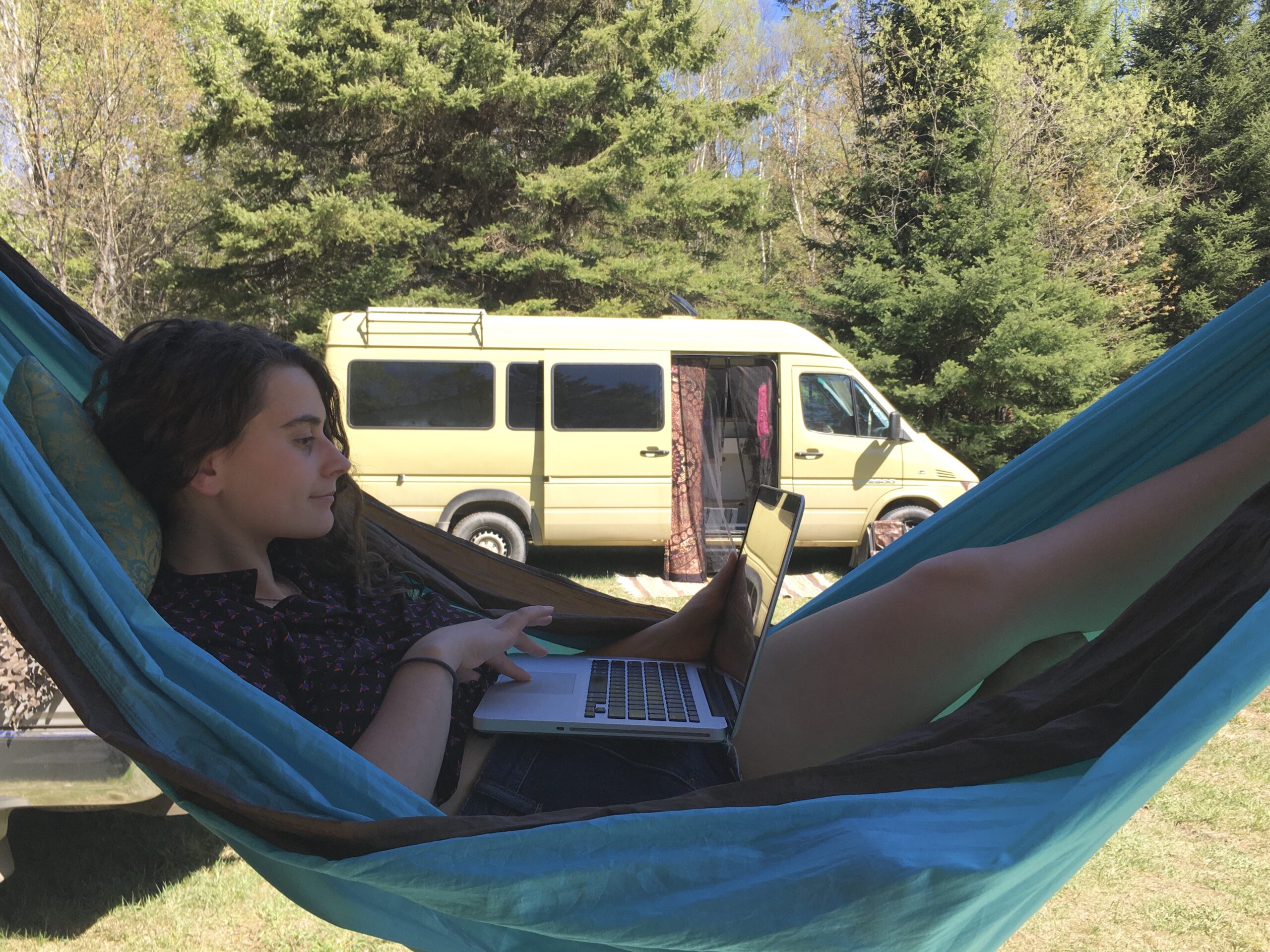 Sorting out the electrical system of this DIY van conversion was by far one of the biggest hurdles in the build. At first, everything seemed to be foreign but after a little critical thinking, it pieced together quite nicely.

All of the components listed below power every draw in the van allowing us to work remotely and live comfortably.

Both David and I are eagerly waiting for the roads to open once this worldwide pandemic allows for travel. We both are spending our time hustling and working on the projects that light us up and put us in a place to travel more in the future.

We are planning to buy land soon to build a tiny home. The plan is to use that tiny home as a home base while still having the van to travel with. A

fter living in this van for the last year and a half I’ve very quickly realized that this type of lifestyle is one that brings lots of joy. Living in a van teaches you to simplify everything and be okay with whatever pops up, a lesson that could be detrimental to no one.

You can learn more about us on our website