I love stepping into a van conversion that emanates the feeling of home. Cozy lighting, lots of pillows, and intuitive space designed for everyday life. There is nothing like a tiny home on wheels that fills all the gaps between stationary life and feeling like a free spirit out on an adventure.

That is the beauty of van life and all that comes with having your home with you, always. The ability to feel like a free bird yet also be grounded enough to haul your home, and possessions anywhere you go. With a van, you become a turtle.

This is where Chet and Sarah found themselves. Both having worked for Disney On Ice for many years, constantly traveling, living out of suitcases, hotel rooms, and being hauled to new destinations with a strict timeline. A true tour lifestyle.

So, when covid-19 hit, and they were laid off, for the time being, they quickly pivoted towards vanlife. At first, they were going to purchase a home on the East coast of Canada but they quickly realized purchasing a van was a much smarter option for the position they were in. It had always been a pipe dream and all of the sudden, as the world shut down, it became reality.

Come and step inside the gorgeous off-grid dream home on wheels and take a look inside this van conversion. 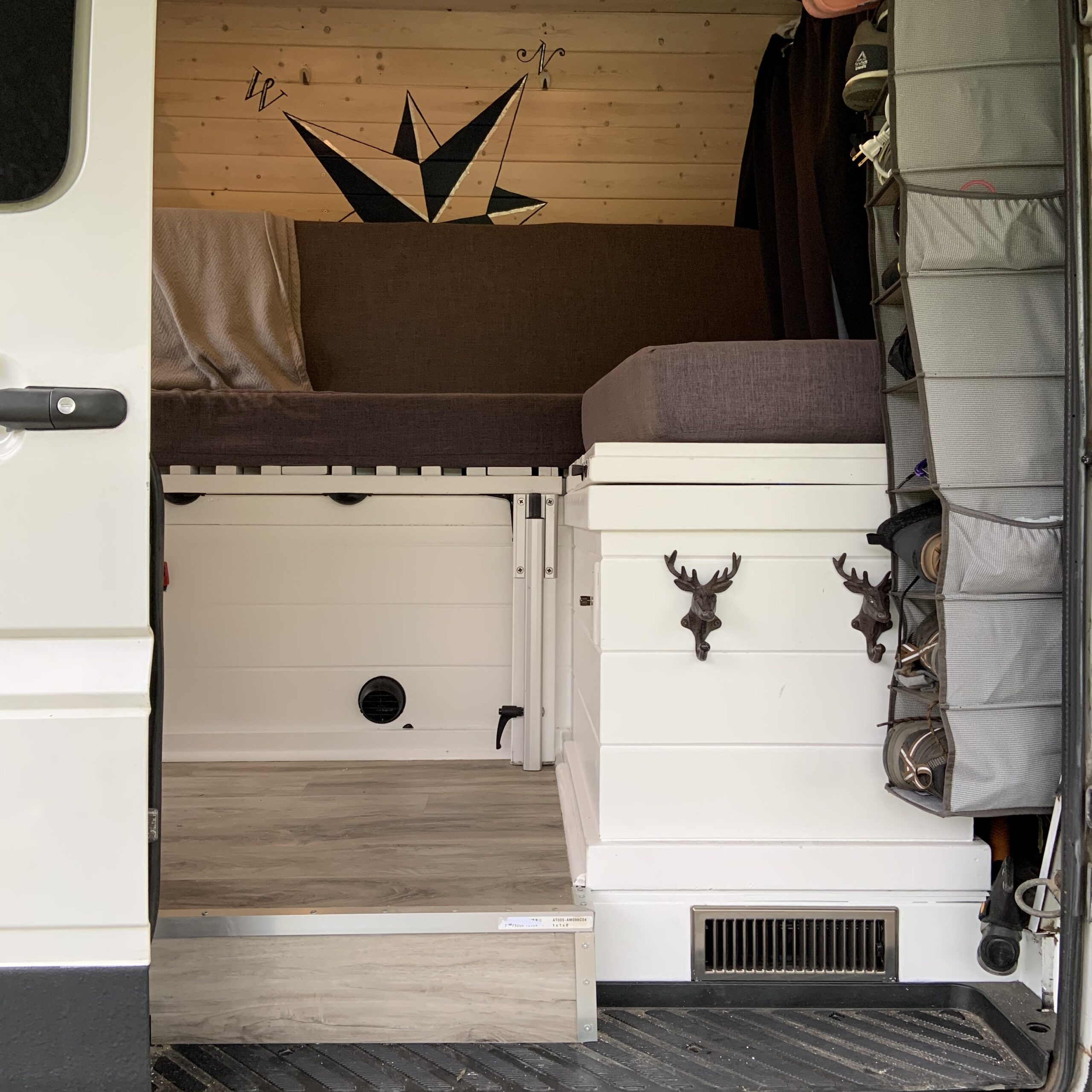 Chet and Sarah purchased their van conversion from a couple who have ended things and needed to find a buyer for their home. After seeing a listing for the van, Sarah rushed to check it out. She scooped it up after only 2 hours of being on the market.

Purchasing a van that was already converted gave them enough structure to immediately have an adventure mobile. But, it also left the room to do small renovations to make it their own. The beauty of purchasing a self converted Sprinter van is the lifespan of the vehicle itself.

The reason that many, including myself, are enamoured by what the Sprinter has to offer is its sheer lifespan. The reason that you see so many Sprinter van conversions is because of the dependability they offer.

For example, the van Chet and Sarah now own had driven all the way from BC to Argentina with its previous owners — that is way over 12,000kms (7,500miles) along the Pan-American Highway, a popular yet rough route for many overlanders and vanlifers alike. 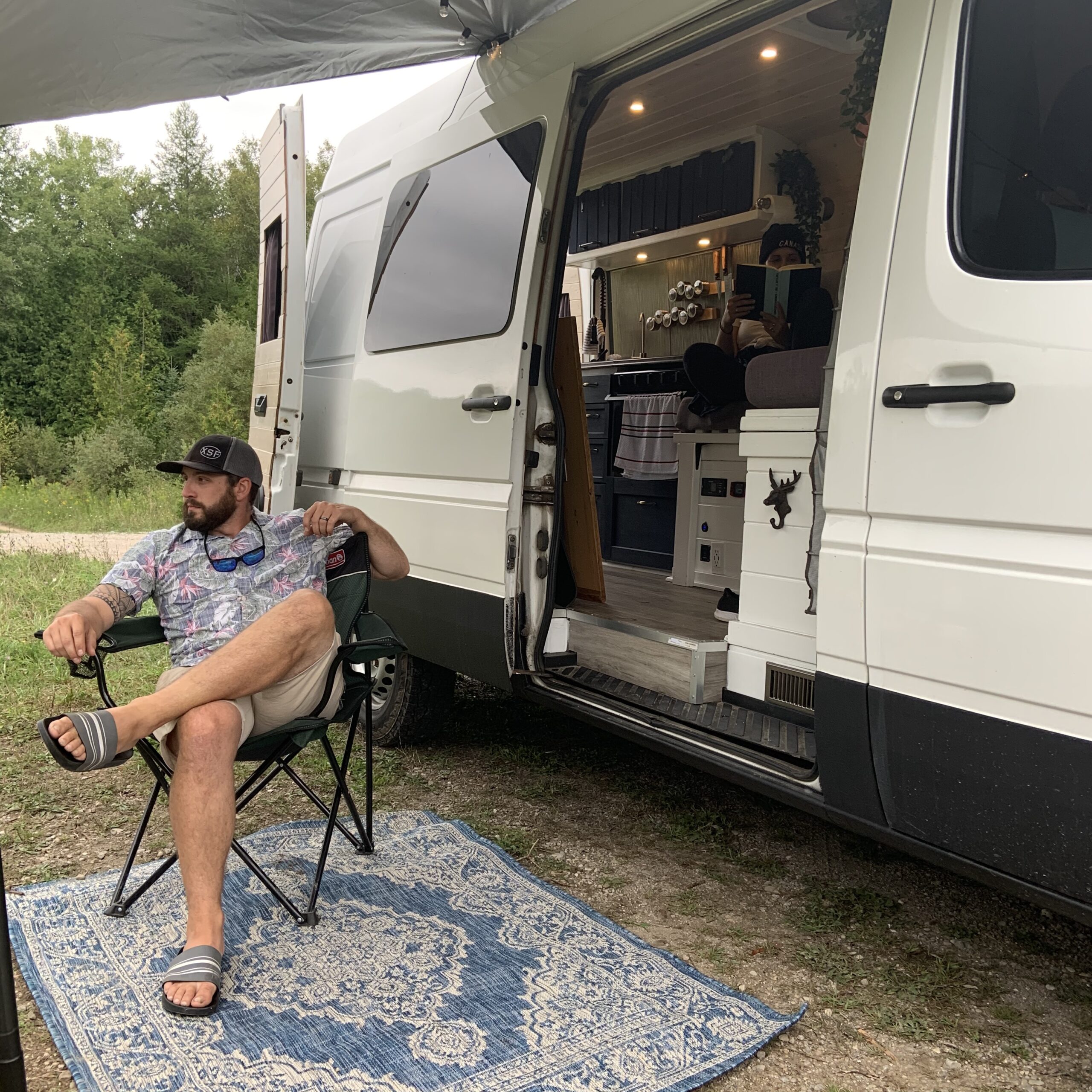 I had the pleasure of first meeting Chet and Sarah at a vanlife meet up. At the time, they had just gotten their van and finished up some renovations to make it their own. We hit it off immediately. Their welcoming spirit and similar humour helped us become fast friends.

Both of them work for Disney on Ice and have for almost the past decade. Sarah is a performer and does the gorgeous drool-worthy figure skating moves we are all jealous of. Chet is the Stage Manager and is in charge of many similar jobs.

Having a van to travel around and live in full-time is the perfect way to continue doing their jobs while also still being able to bring their home with them to all North American shows. It’s a unique reason to need a van but fits perfectly for both of them.

Currently, they are located in Ontario and live part-time in their van as they await an open road and a new tour. 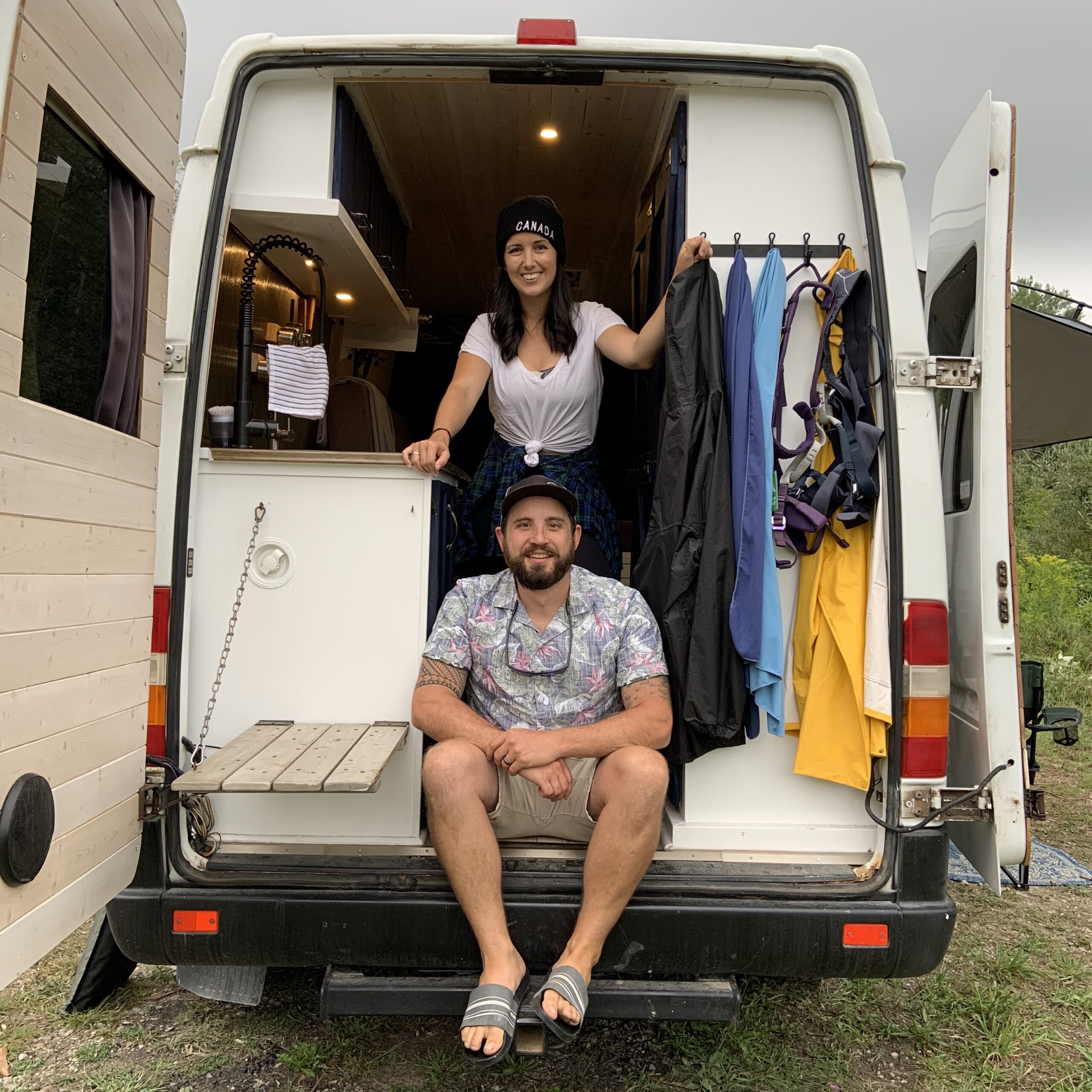 The Kitchen, Where They Cook

This van conversion has a unique layout that is not the norm for many vans. The kitchen area is located at the back of the van, right where the back doors swing open. It takes up approximately half of the van with a large countertop and everything you could ever need in a tiny kitchen. 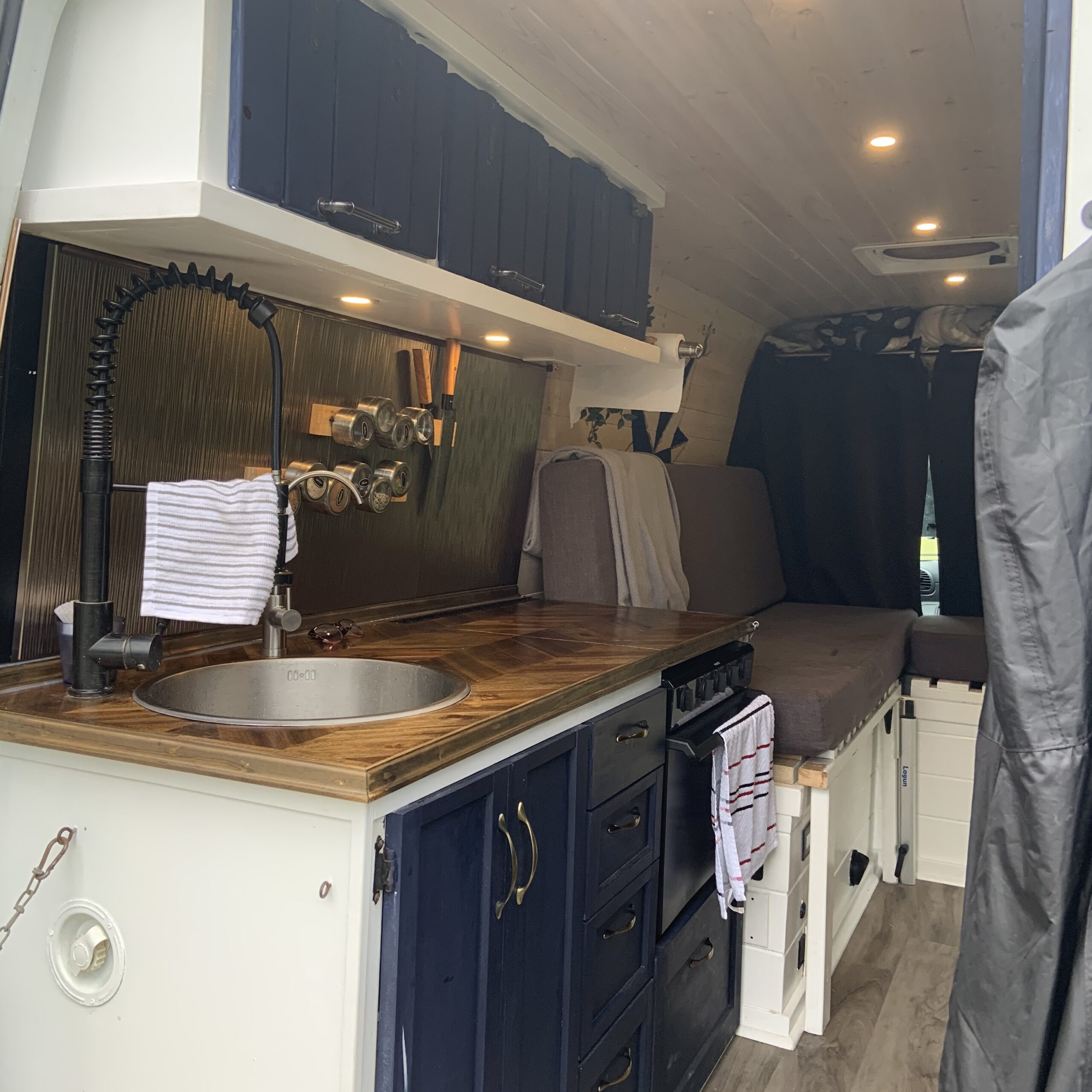 I partially love the stove/oven combo that allows you to bake whatever your heart desires. The stove/oven was an addition that Sarah was firm on when they bought the van. Even when traveling in their personal car, she always brings their camp oven along for the trip, something I can relate to, very well.

Once you have an oven in your van conversion, there is no looking back.

This van conversion has another unique kitchen feature and that is the fridge. Well, more specifically, the location of the fridge. The van came with the fridge located closer to the front tucked under the couch/bed combo. You simply flip up the couch and find the 12v Dometic fridge waiting for you.

Chet points out that while it’s a great use of space, in the future he would like for it to slide out. Doing so would make it easier to access if one of them were to stay in bed as the other starts breakfast. 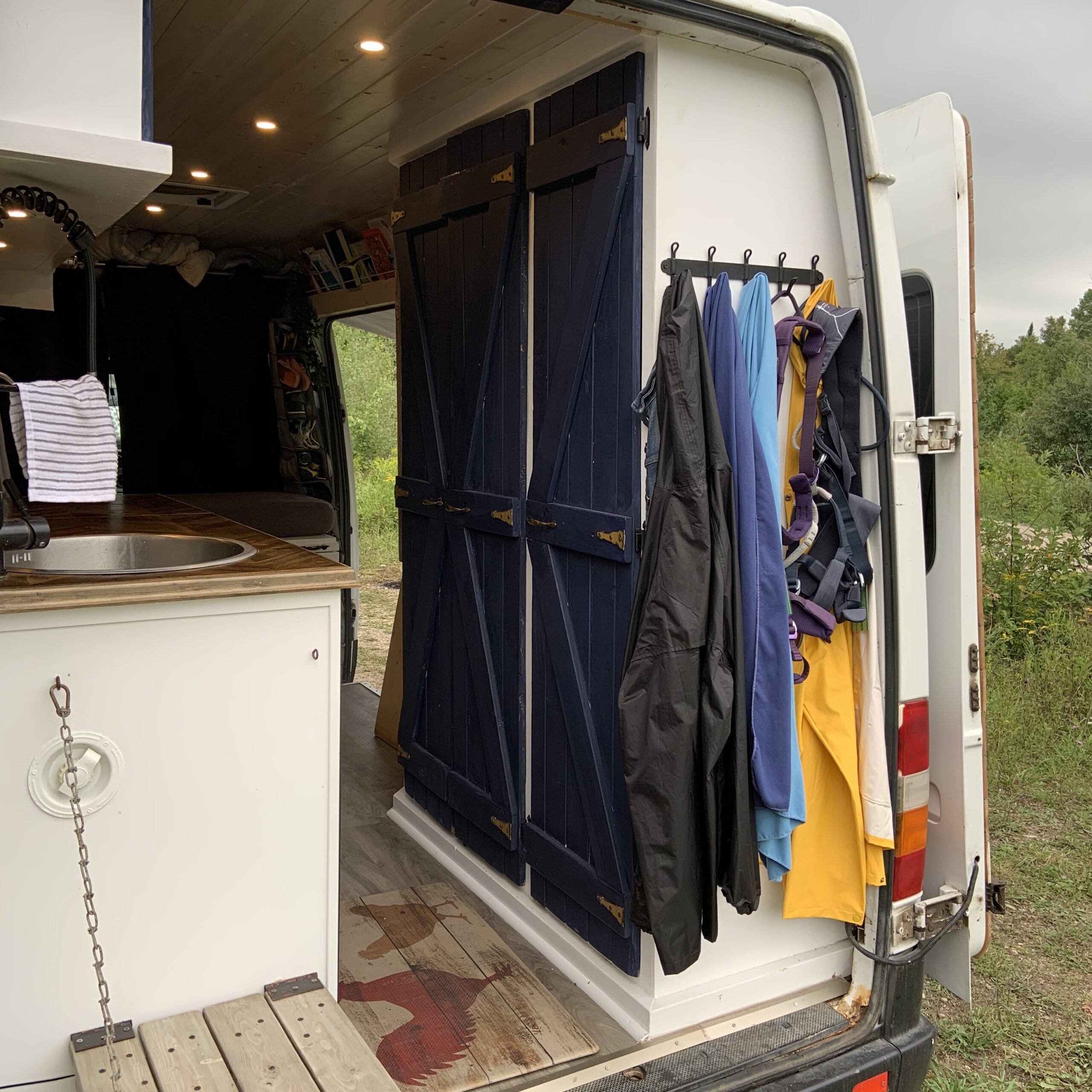 Moving on to the rest of the kitchen space, you see lots of cabinetry for storage. The majority of the kitchen is located along the driver’s side of the van but just adjacent to that is a floor to ceiling cabinet that is used as a pantry.

This pantry can hold more food than the average 1 bedroom apartment, which comes in handy when going off the grid. There is also a second side to that pantry that is used as their closet, but, more on that later!

Features of the kitchen: 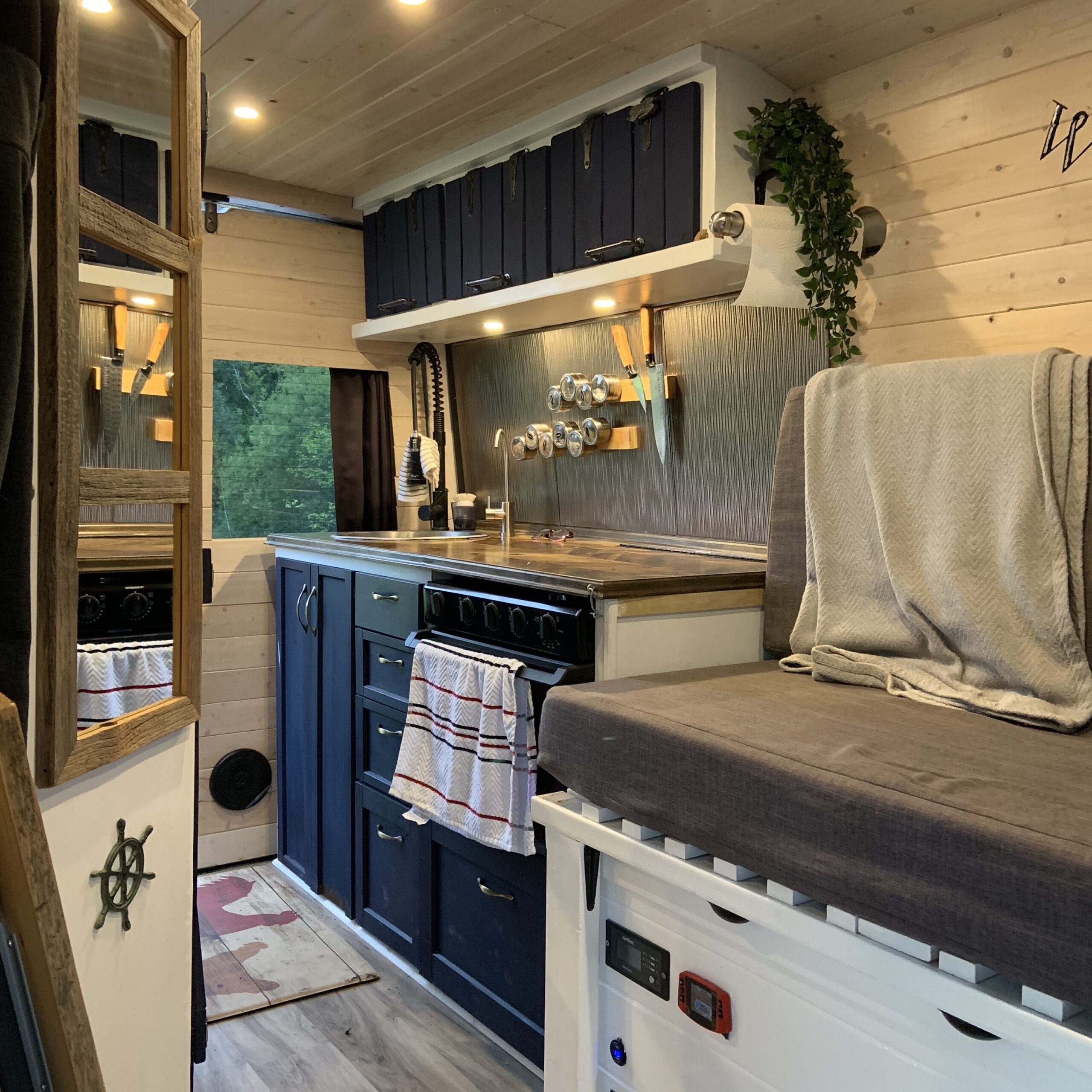 Since the kitchen is located at the back of the van the living space/bedroom gets swapped around to the front. When the side door slides open, you are immediately greeted by a large “L-shaped” couch which at night, doubles as the bed.

Having the bed in this location allows for a great amount of floor space and the ability to walk through from back to front. Since this is the shorter wheelbase of the Sprinter (144inch wheelbase), it is unusual to come across a van that feels as open as this one does. 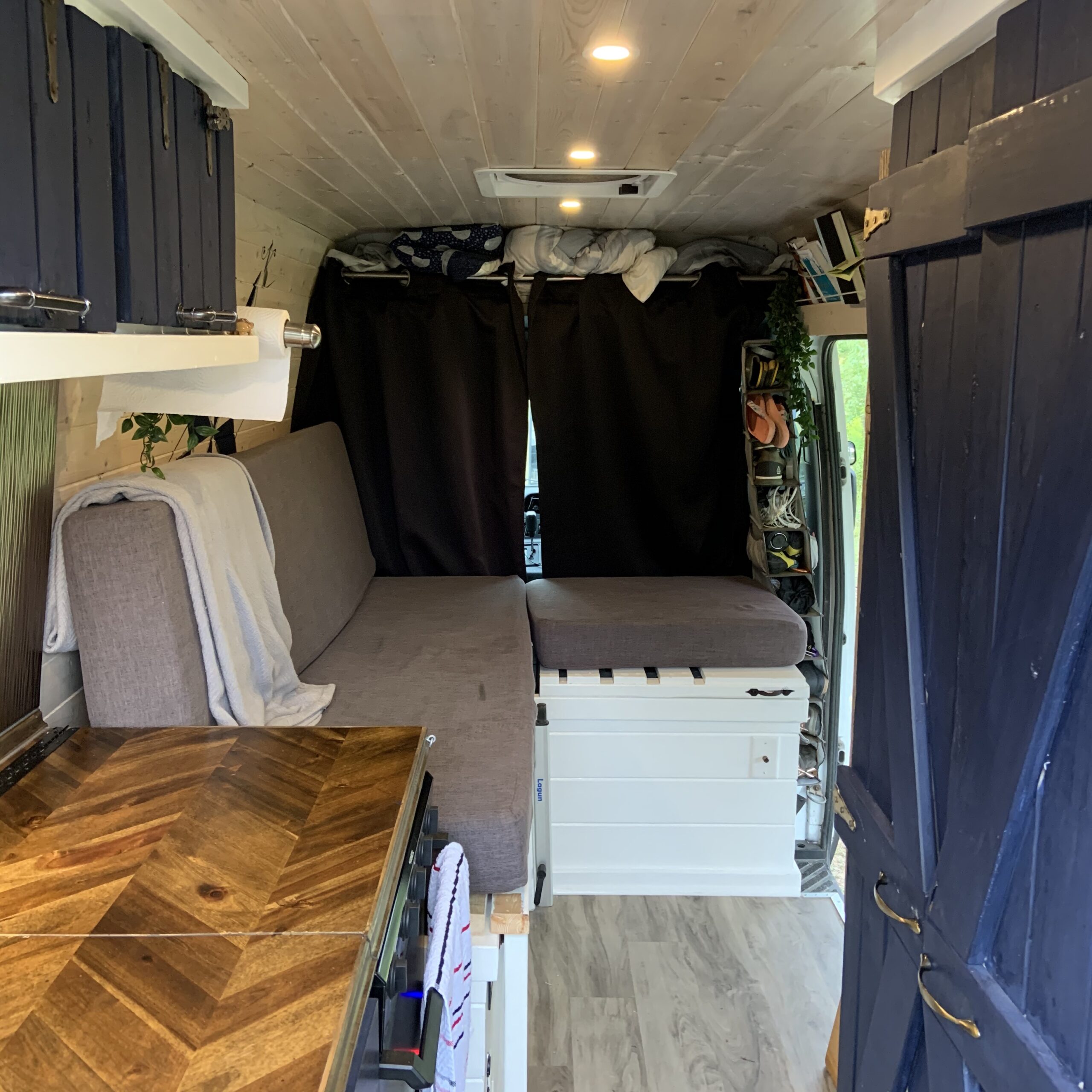 The couch has a table on a Lagun mount that acts as a great place to get some work done or to eat a tasty meal. The large couch allows for 6 people to fit around the table, making it the perfect hosting space. There is also a gorgeous compass design painted onto the wall behind the couch that brings some depth and colour to the tongue and groove wall panelling.

When it is time to rest, the couch transforms into what could probably be translated as a double-sized bed. This transition is made by the wooden slat design that the couch sits upon. The cushions used for the couch get reconfigured and voila, you have a bed!

Another feature of the living space is the large closet that I shared earlier. This gives Chet and Sarah a large space to store all of their clothing. They even have a very clever slide-out closet that provides room to store clothes that need to be hung. There is also a large mirror located at the end of this cabinet that faces into the couch/bed area. 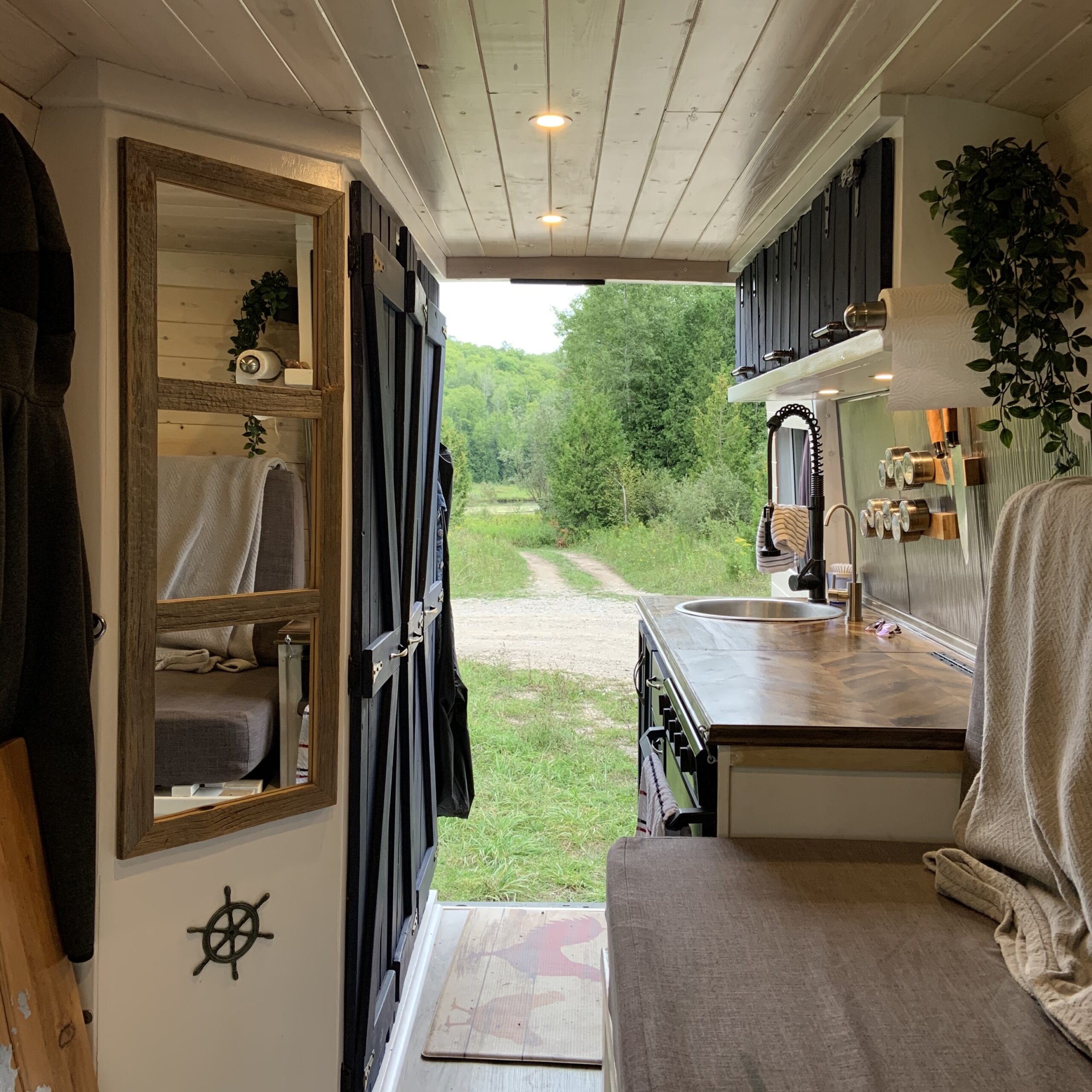 Where is the washroom in this van conversion?

Since Chet and Sarah bought the van as an already converted home, they didn’t get the choice of having a washroom space. It’s quite typical in shorter wheelbase vans to prioritize living space over a washroom space. It just makes sense in most cases.

During the tour they gave me in person, I was assured that they’ve got a washroom system taken care of.

Is there a garage space in this van?

I would talk about the garage but honestly, with the setup Chet and Sarah have, there is no need to have one! Since you can walk through their van conversion from front to back, there is no dedicated garage space. Instead, there is an enormous amount of storage throughout the van.

Under the couch for example is where all of the batteries and electrical components are stored. The diesel heater is also installed into that bench and blows out into the living space. 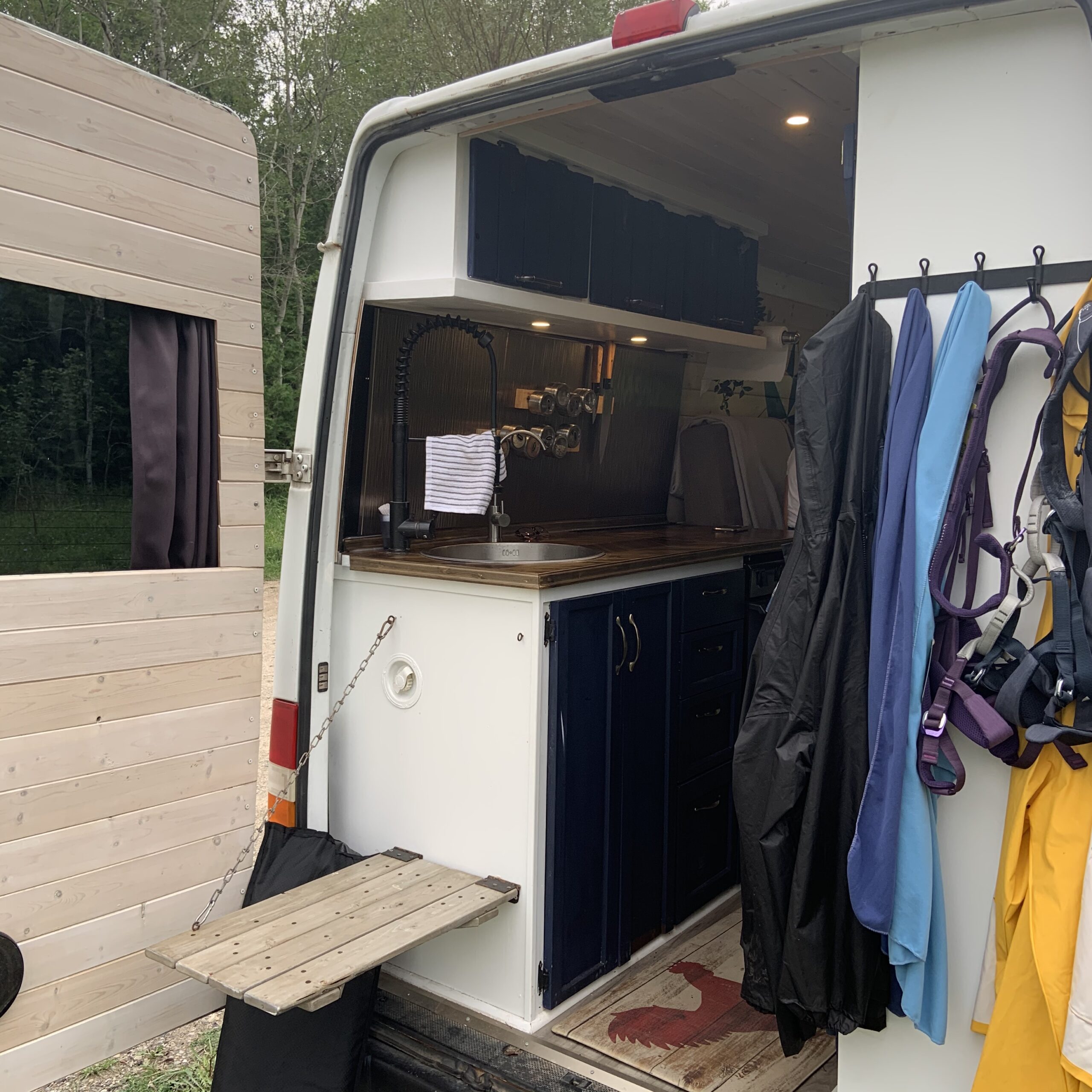 The floor to ceiling clothing closet also has a section at the bottom that Chet and Sarah named the “fun area”. This is where they keep all of their board games and anything else that brings some fun into their life.

As most do, this conversion has a stellar solar electrical system that allows for off-grid living. It is uniquely set up in a way that 2 batteries power certain aspects of the build such as a fridge and fan, while the other batteries fill in the gaps. Chet admits it has been a little tricky to navigate since he didn’t wire those components himself. But, so it goes when purchasing something, there is no instruction manual to a self-converted van! When driving the batteries to get charged by the alternator. When parked, the solar power can keep everything topped up.

What’s Next for Them?

Chet and Sarah are patiently waiting for the roads to open up once again. Since their jobs depend heavily on travel, they are stationary for now near Sarah’s family in Ontario, Canada.

They take Spudder out on weekend trips and enjoy what Ontario has to offer in terms of adventure and outdoor spaces. Sarah has started a part-time job a few days a week. She also focuses on her custom design and print business. Chet is originally from the US and has been in the States since the election.

Make sure to check out the in-depth van conversion tour that we did with them a couple of months ago.

You can find Chet and Sarah on Instagram here