Take A Peak Inside A Futuristic Custom VW T6 Camper

We had the privilege of taking a look at this VW T6 camper at The Camper Show in Birmingham, UK on Thursday, and lucky for us there was a number of very tidy campers on show, but one that really stood out for us was this incredible short-wheel-based VW T6 camper modified by Danbury MotorCaravans.

It’s a 2L TDi Surf King camper conversion with a tonne of extra add-ons. On the outside you have this incredible white and deep blue colour combo, with 18″ alloys, a pop top roof and chrome side bars that give it that clean, modern look.

Now inside is where the magic happens, after you open up the side door you’ll be greeted with a deep blue hue from the LED’s which makes you feel like you’re in some kind of Star Wars star fighter. The drivers and passenger seats swivel around to greet your main living area, the sink has a useful slide out desk which can be used for cooking or working on your next digital nomad project and there’s tonnes of storage sections with nifty sliding doors, because those pull out doors just waste too much space! 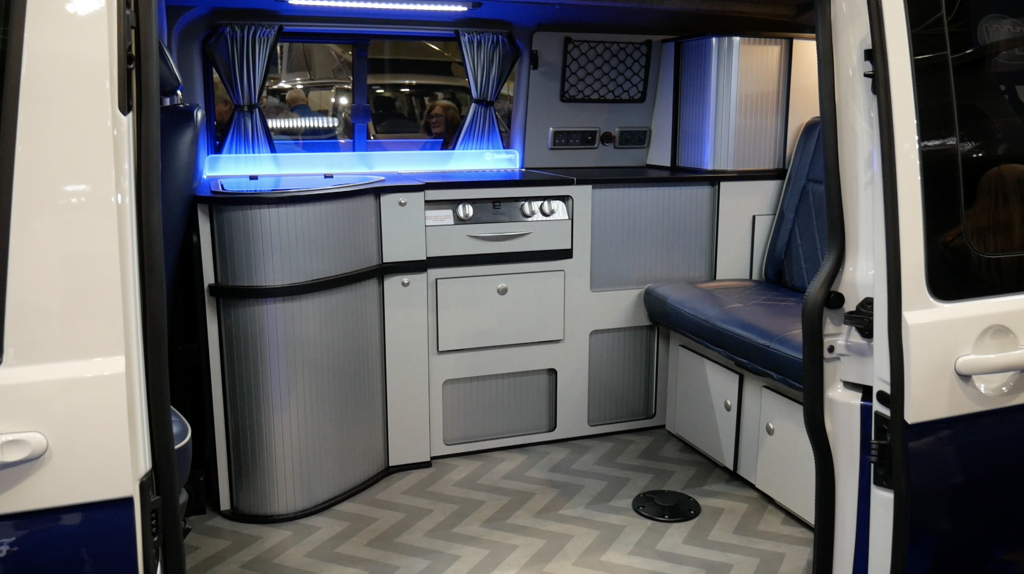 It also features a 50L fridge freezer, 2 burner gas hobs, a grill, a wine rack and tonnes of electricity sockets, including USB ports. And now the main event, it’s fold out double bed that’s as easy as pulling the latch under the seat! Just don’t forget to take those head rests off.

Everywhere you look inside of this camper there’s a touch of detail that you keep missing, for example, the deep blue diamond stitching in the seats, the stealth awning, tinted back windows for privacy and even grey chevron flooring. Everything done to this camper shouts luxury, while keeping its modern, hi-tech styling. Danbury MotorCaravans have done a cracking job with this one.