When it comes to thinking about installing camper van windows into your tiny home build, there are lots of different routes that you can go down. There’s no right or wrong choice, though whichever design you go for may ultimately give a lot away about your character.

Do you like the appeal of a massive feature piece that will attract the attention of passers-by, or are you thinking about converting a stealth camper van that could pass for a delivery van during the day? Windows are a sure giveaway that someone’ might have valuables inside, but without light, you might be in for a pretty miserable ride.

So, which option is going to be best for you? What are the benefits of having a skylight compared to a vent window?

Luckily for you, we know a thing or two about camper van windows. We’ve picked up a few tips on how to fit them too. 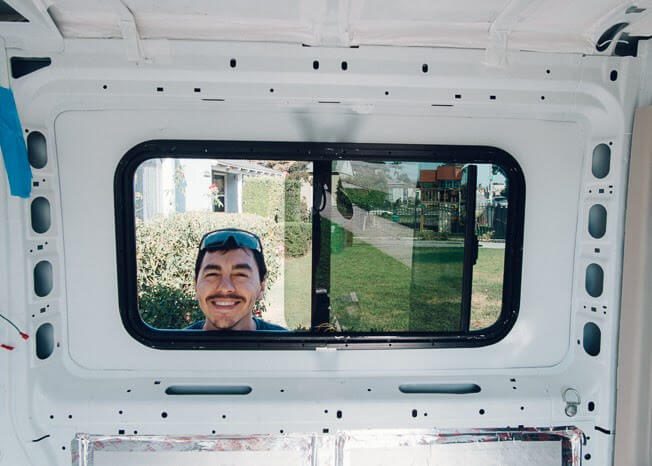 We’re not going to go too much into the science behind how to put windows into your bare shell, but we are going to give you a few helpful pointers that might save you from bawling on the pavement or cutting your hands into smithereens. 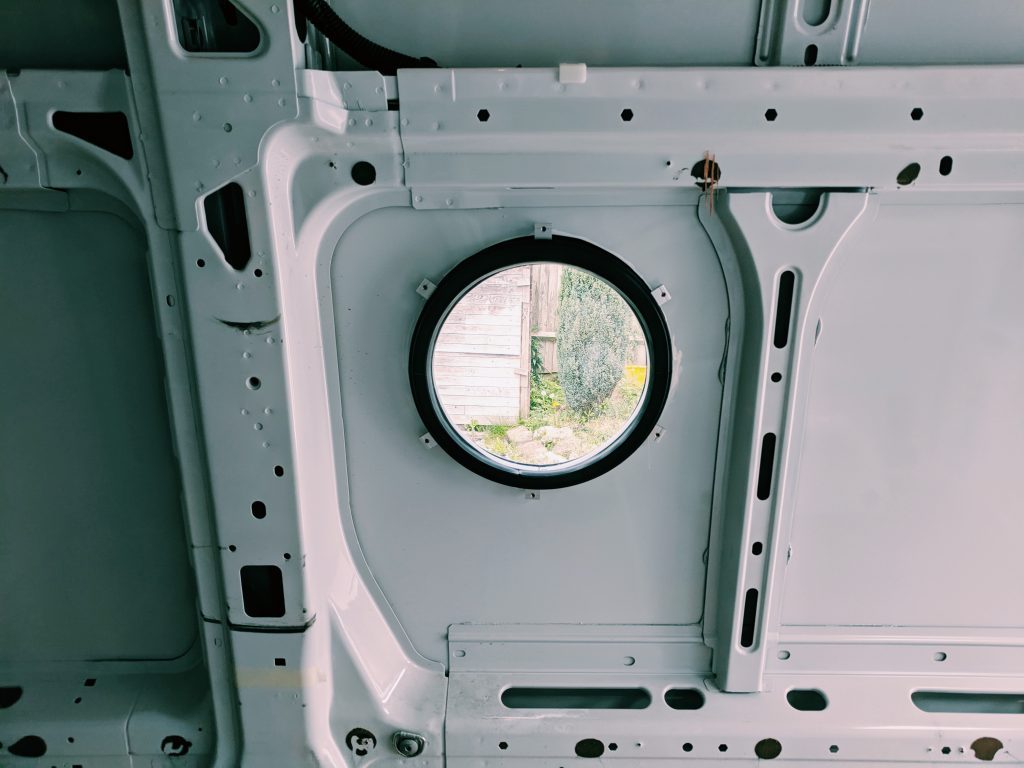 I’m not sure whether it’s the appeal of making your van look like a narrowboat, but there’s something quintessential about putting a porthole inside your camper conversion. It’s like having all of the benefits of a life on the water…just without the water.

The porthole isn’t just a quirky add-on; if installed securely, it can also be a safety feature too. It’s easy to smash a big window and climb through, but how many people do you know that can squeeze in through a porthole? Unless you’re parking up by a contortionist convention, then you should be pretty safe.

You’ll need a steady hand and some patience for a porthole. It’s much harder to cut a circle in the side of a van than it is to cut a straight line, and you’ll have to go back with a file to get those edges nice and round. 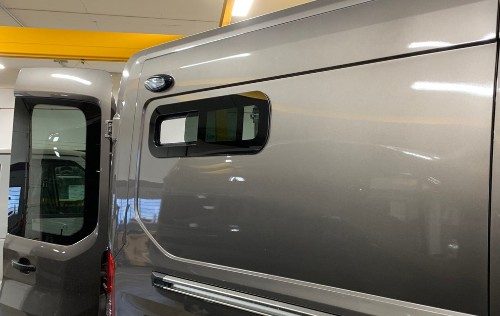 The vent window isn’t going to win any prizes for being the best looking of our camper van windows, but it certainly is the most practical.

If you want to keep your tiny home aired while you go out on a walk or are worried about carbon monoxide levels building up with your log burner crackling away, then the vent window could be the one for you.

It doesn’t let in much light and it’s not going to be the best for looking out at a picturesque mountain view, but it’s certainly going to be impossible for someone to break in through (unless they have a trained monkey or magical snake, that is). 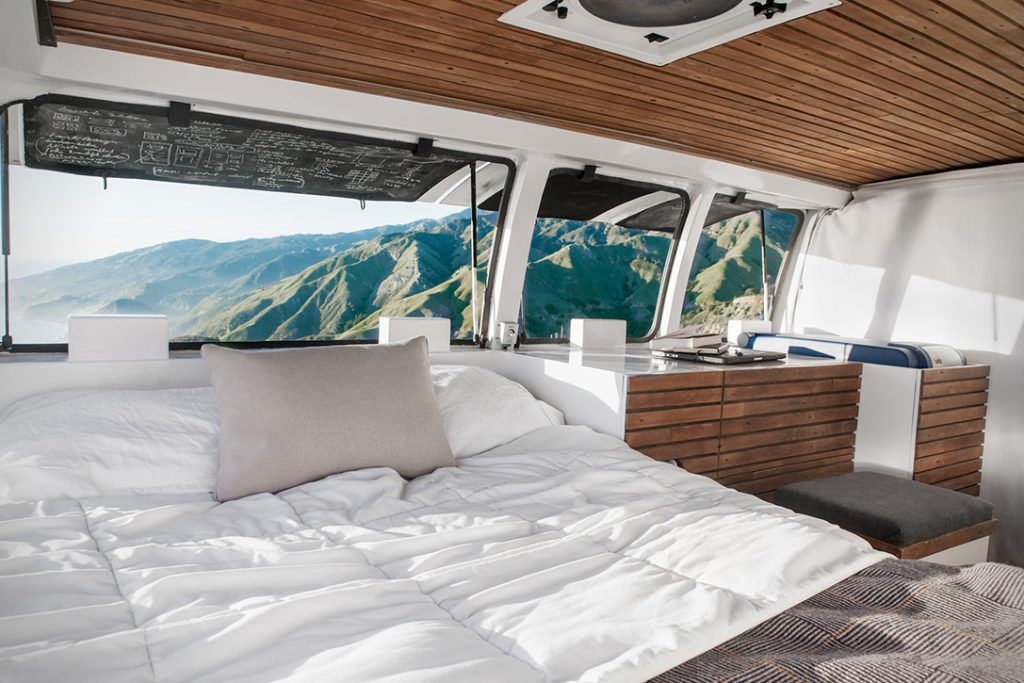 This window setup is one of the cleverest that I’ve seen on the web for a long time. It’s not flashy, but it is 100% stealthy when the windows are closed. Using the side-panels themselves instead of cutting out holes and throwing bits away is a lot more economical too!

When these windows are locked tight, you can’t tell that this van is a camper. Sure, the other camper van windows in our list can let in light, but can they double up as a blackboard? I think you know the answer (no, they sure cant!).

There are no circle or oval cuts to make, and you’d probably need a blow torch to try and break through into the main body of the build. The bad news is that you’re not going to be able to get any air in your van without a roof vent, so that means extra wiring to think about in your planning stage. 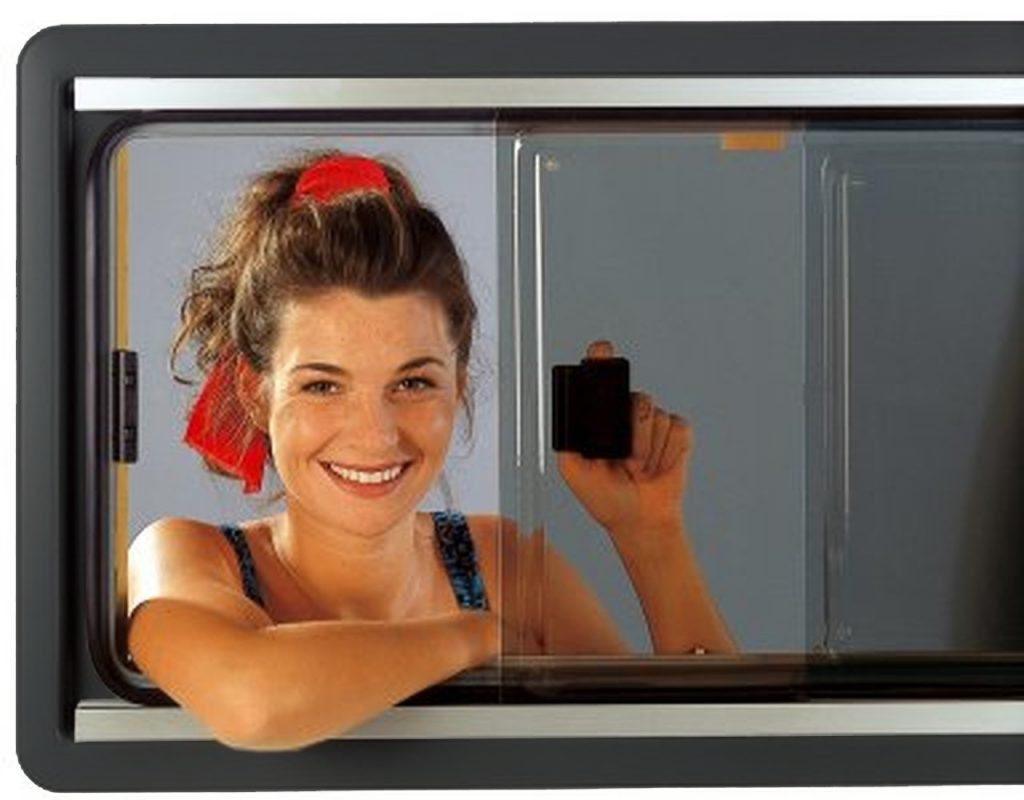 You’ll often see sliding camper van windows on many RV models throughout the world. They’re big, they let in lots of light, and they’re wide enough to be able to have a conversation with a neighbour. You can even pass out items to family members without opening the door and letting the dog escape.

Sliding windows usually come in a rectangular mount, so they’re not going to be a massive pain to install. You can probably even leave the edges of your hole a little bit rough thanks to the rubber seal that sits over the join.

The bad news is that these windows are notoriously easy to break into, so they’re maybe not the best choice if you’re thinking of parking up in cities quite often. It’s true that most people will ‘find a way’ of breaking into anything if they have enough time, but the sliding window isn’t known for it’s ‘burglar stalling’ qualities.

5. The Plastic Flip Out Window 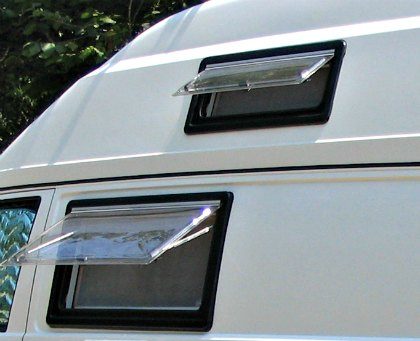 I’ve had these camper van windows on my build for the last two-and-a-half years now, and I’ve never had any problems. There were already installed in the van when we bought it, and while glass would have looked cooler, they’ve always served us well.

I’m not going to lie; they are a bit ugly to look at, but they’re a secure option. My windows have two locking arms that bolt down to stop them from being prized open from the outside, and they’re quite low profile. They don’t glint in the sun, and they’re not instantly noticeable from far away.

In the same way as the sliding window, the shape of the frame isn’t that hard to cut and the overall hole size is pretty small compared to some of the other windows in this list. They let in light, they’re tough to crack, and they’re pretty cheap to buy too.

6. The Blacked Out Window 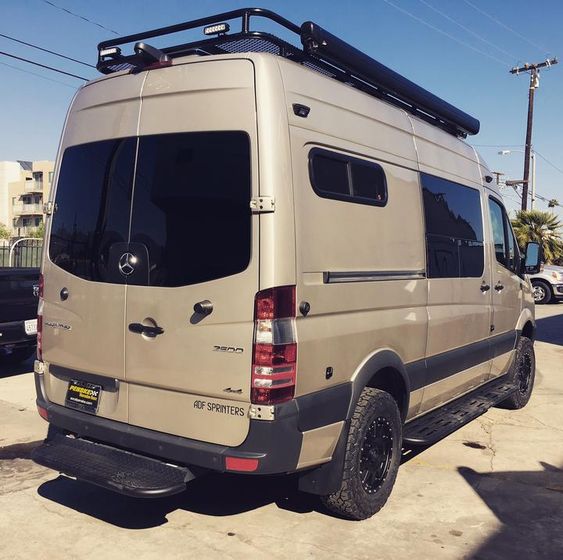 If you’re leaning towards glass camper van windows, then I can’t see any reason why you wouldn’t go for blacked out/tinted ones. They reduce the amount of heat and UV rays that can shoot into your rolling home, they’re great for privacy, and they stop harsh sunlight blinding you while you’re having a morning coffee.

Ok, so there is the theory that blacked out windows indicate that you might have something to hide. Some people also say that if thieves can’t see anything valuable, then they’ll just move on. Our advice would be to always install a safe and bolt it down. Do it somewhere hard to reach, and make it like Fort Knox.

If you’re the type of person that forgets to put clothes on before washing the dishes and might be parking up in a communal aire with golden oldies, then blacked out windows might save you a lawsuit for flashing innocent bystanders. 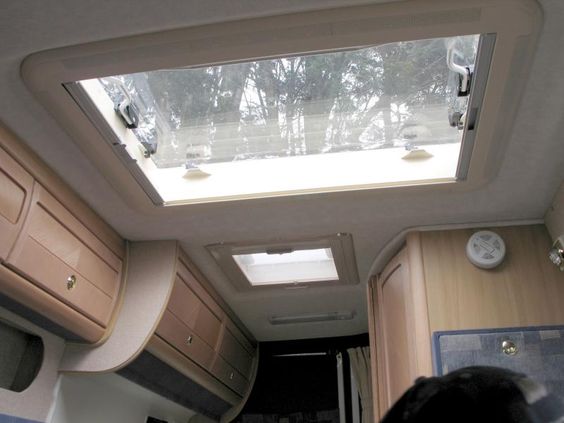 I have a roof window from an old car in my van. It’s really nice for daydreaming while the clouds roll by and watching the rain, but it was a nightmare to fit. We also have to periodically replace the sealant around the outside when it starts to crack.

Having a skylight means that you can keep your blackout blinds closed and still have light coming into your living space. Heck, you might not even need any side windows at all if you install a couple of these on the roof. Just remember to have someone nearby to help you lift the glass up, especially if it’s a hefty piece like the one in the picture above!

Some skylight camper van windows open, allowing you to let air into your van even while you’re out on a walk. Ours is simply for light, and if it does leak, then the water just falls straight into the sink. I’d like to say that we planned it that way, but I’d be lying. 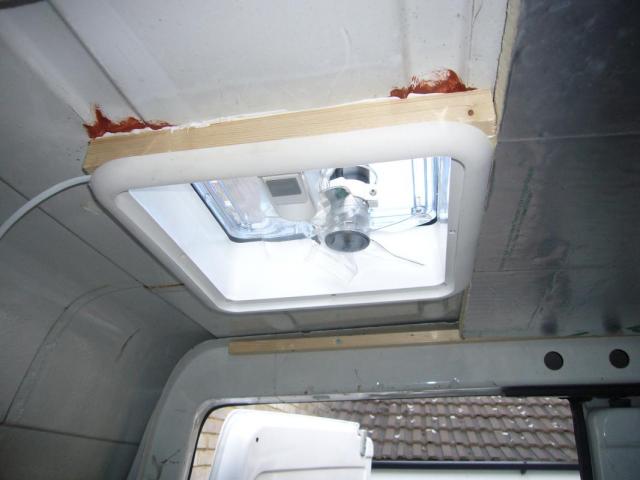 I don’t have a roof vent in my van, but there are times when I wish that we had included one in the build. Whenever I’m in California with Four Wheel Campers, I can’t wait to crack one of these on and enjoy the artificial breeze. That place is HOT.

Roof vents are a great option if you do a lot of cooking in your van, especially boiling water for pasta and rice. You can get rid of the steam without opening your door, remaining stealthy while eradicating hunger.

They do, however, look uglier than the Hulk’s newborn baby. They also make a bit of a noise, and they aren’t the easiest thing to wire up if you’ve already completed your van build. They don’t draw much energy, but just weigh up how much you would actually use one before you part with your cash. 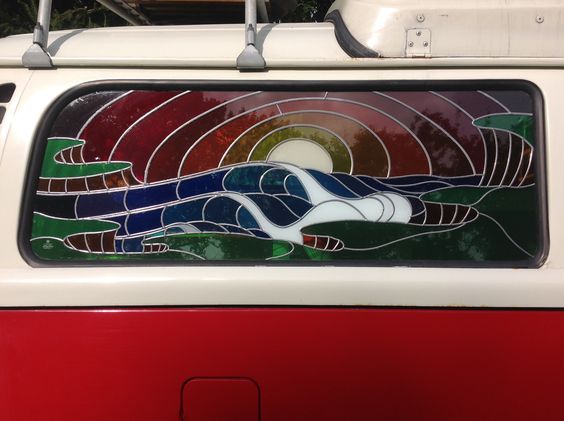 You might think that this is an odd choice of decoration for a motorhome, but I’ve seen a lot of camper van windows like this recently. There’s something about stained glass that always intrigues me, and why shouldn’t people express themselves with their motors!

Making stained glass camper van windows wouldn’t be that difficult for a professional; they’re used to doing massive churches, after all. As long as you have the available space, you can get as creative as you want. Bring a bit of colour to your space, and put a smile on a stranger’s face.

There are, however, a few downsides. The lead content in stained glass windows makes them a much heavier option than just a normal piece of glass, and it would be much easier to break if someone headbutted it or bashed it with a pole. Look into other safety measures to protect your home if this is the route you want to go down. 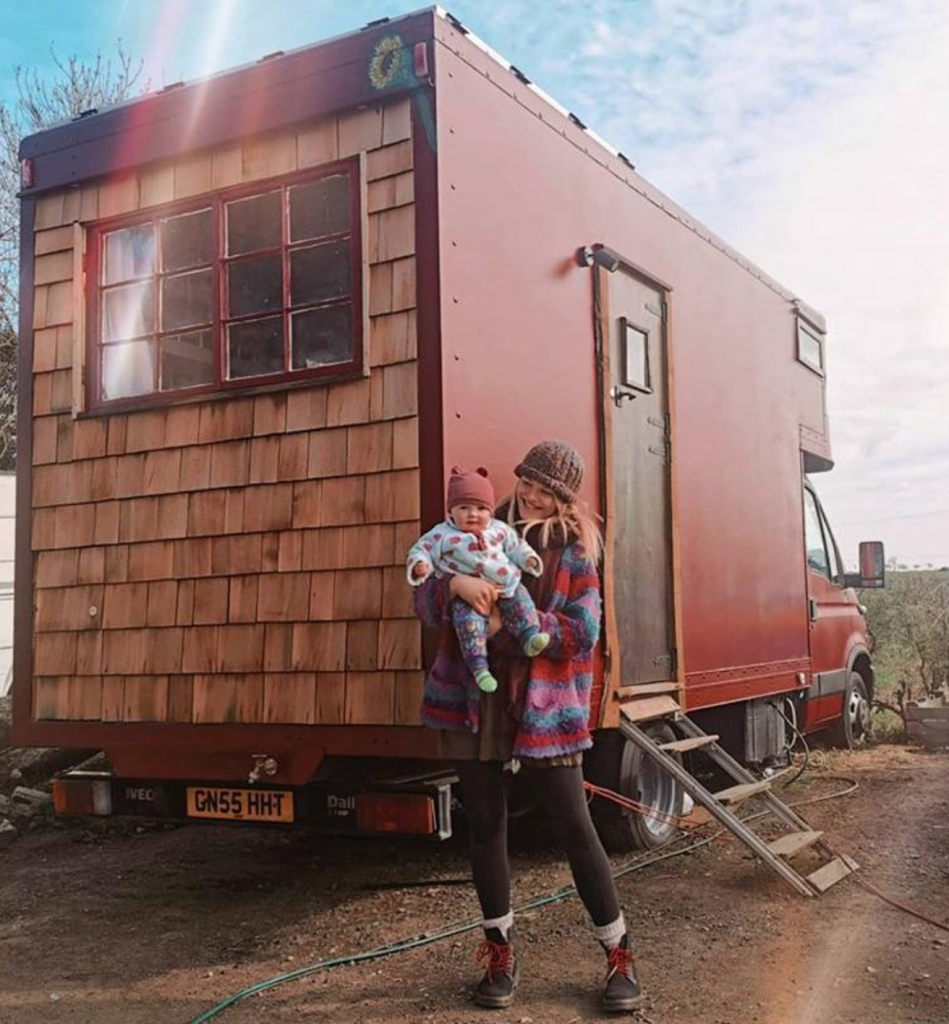 The last style on our list of camper van windows is probably the most eco-friendly of them all – up-cycling an old window and integrating it into your van build.

This is easier if you have a larger vehicle to play around with, especially something like a Luton box van. It’s not had to pick up old windows from scrap yards, but it would be quite hard to make one work with a metal frame.

While you can really get creative and turn people’s heads with your funky design, old windows don’t come with any sort of safety rating or a guarantee from the manufacturer that it can withstand one of Elon Musk’s rocks. It’s a ‘use at your own risk’ kind of situation.