Five Crazy Campervans You Have Got To See

Crazy Campervans are cool to look and dream about owning; they often stretch the boundaries of design and strive to make the impossible possible. Having a camper is all about getting out there and exploring the wild, meeting new people and experiencing new cultures. Today we’re looking at five of the weirdest campers that we’ve ever seen that will help you do just that.

Some of these campers are lavish and almost unattainable, while others are a bit more down to earth and sensible. Whichever is your favourite, they all fuel adventure and would be a fun vehicle to take on an epic road trip. 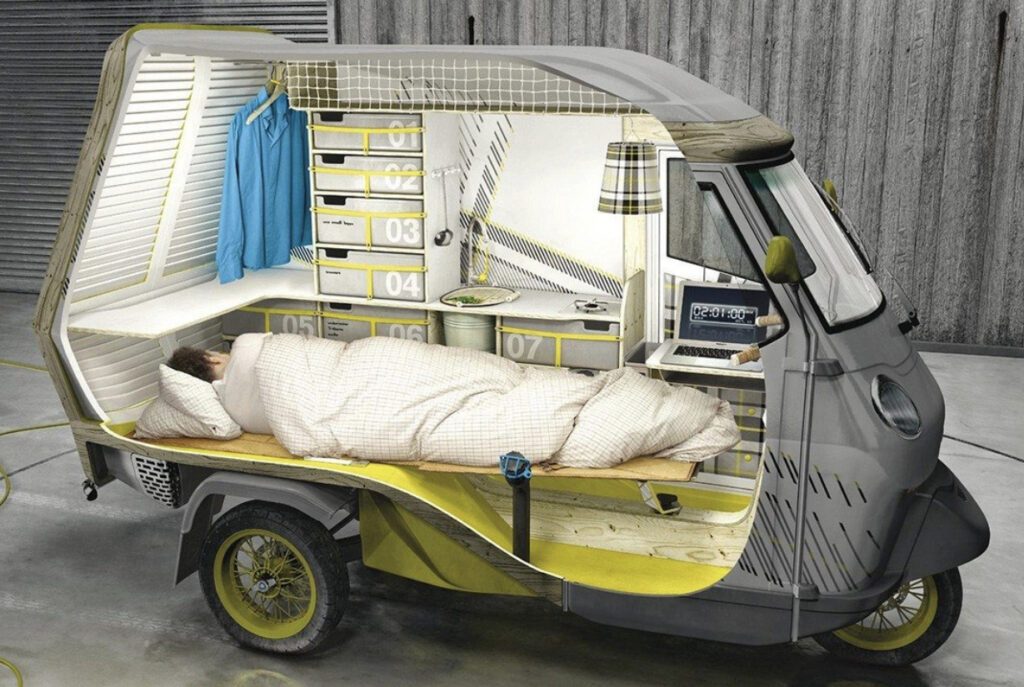 First up on our list of crazy campervans we have the Tuk Tuk Camper. Yes, someone has been mad enough to build a campervan in a tiny Tuk Tuk. I can kind of see the logic, Tuk Tuk’s may be small, but they are a mighty vehicle and seem to be able to withstand the toughest of terrains.

A tuk tuk camper can allow you to nip in and out of traffic, almost like a motorcycle, so getting traffic could become a thing of the past. They would also be pretty fuel-efficient, compared to a large campervan, as they are so tiny. However, the one big downfall is the inability to go over about 30mph. But, if it’s life in the slow lane and a chilled out beach vibe that you’re going for, does this even matter? 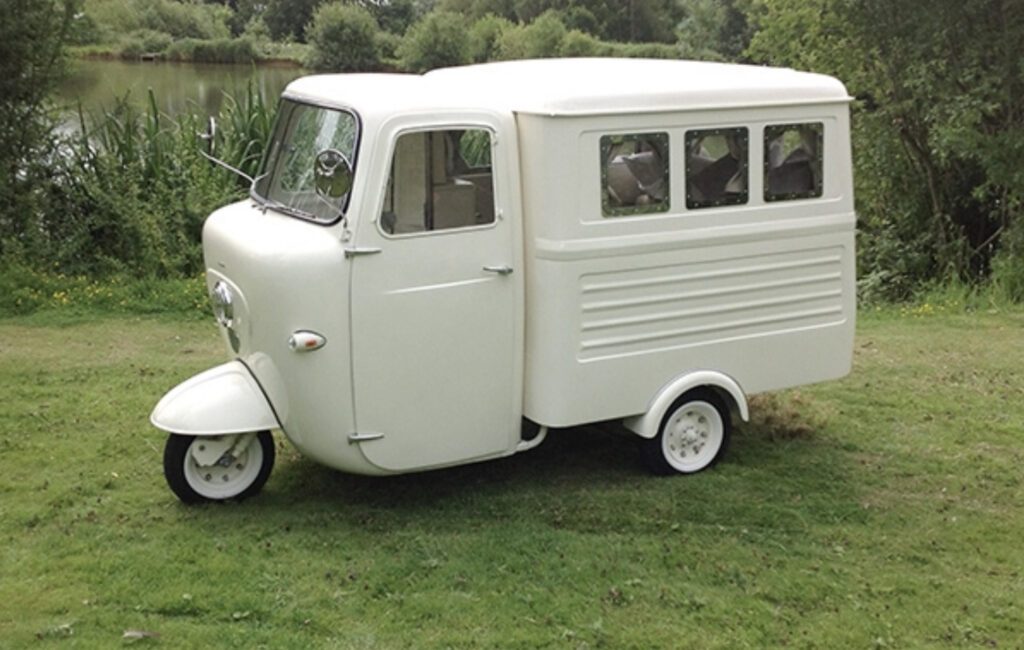 If you’re a true minimalist, then this is one of the crazy campervans that could work for you. There certainly isn’t much room to bring gear along with you. It may also be more of a solo affair unless you get two and have a bedroom each!

As an integral part of transport throughout South East Asia, travelling and living out of a Tuk Tuk across these beautiful landscapes seems almost romantic. Strap a surfboard to the roof, build a bed inside, and you’re good to go on the adventure of a lifetime. If this sounds idyllic to you, then, unfortunately, you will have to spend some time building out your camper first. The Tuk Tuk Campervan may be a cool idea, but you can’t actually buy one yet, so self-built it is! 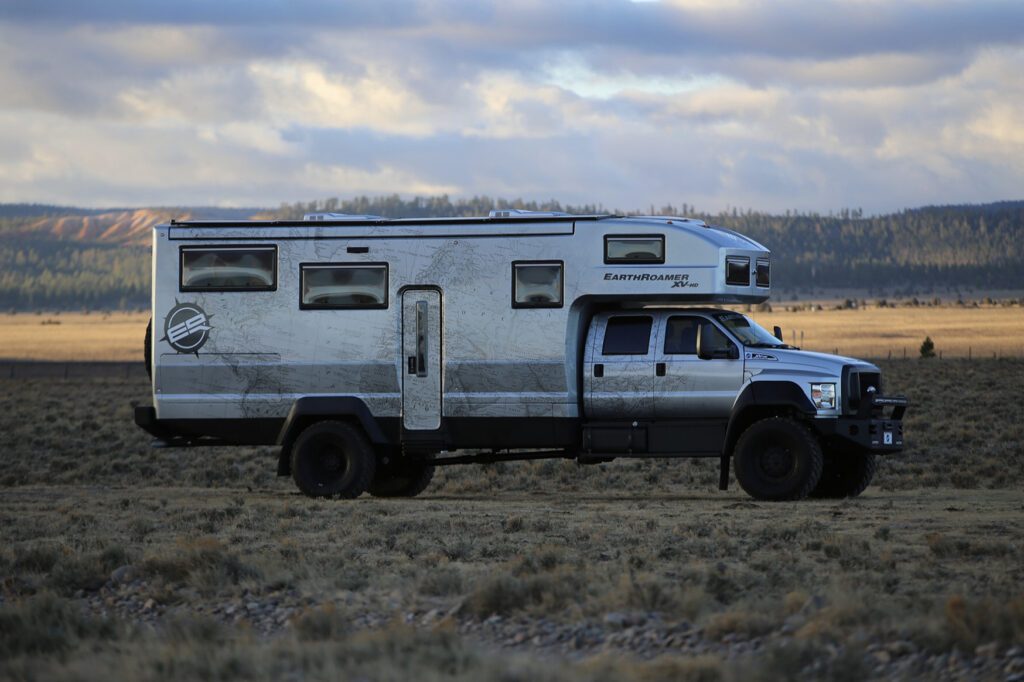 If your goal is a bit bigger than the Tuk Tuk Camper, then think no further than the EarthRoamer HD. This camper is basically a miniature house, designed to take you off-road and off-grid. The EarthRoamer is one of the crazy campervans that I’d like to own if I was going on a wild around the world trip that is. One can dream…

If it as an off-grid adventure that you’re searching for, then the EarthRoamer HD is designed with you in mind. This camper features an impressive 115 gallons of diesel, 250 gallons of fresh water storage, 125-gallon black water capacity, 2100 watts of solar power and a large 20000-watt hour battery bank. With numbers like these, you can stay off-grid for long periods and be completely self-sufficient. 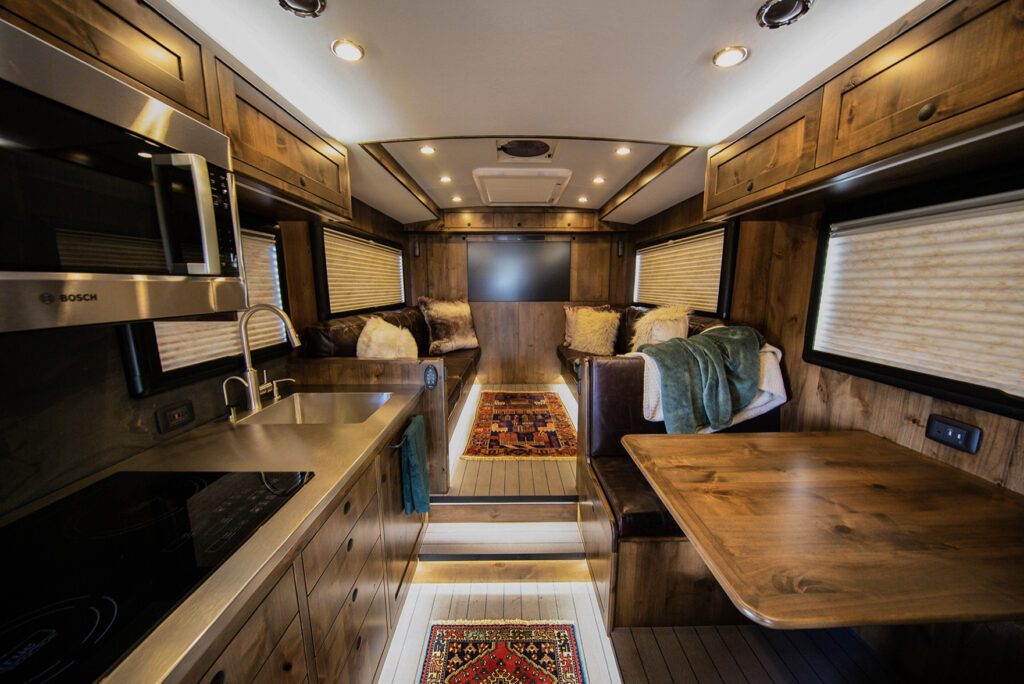 Being self-sufficient in your camper means you can stay further off of the beaten track and explore remote locations away from the tourist hot spots. And the EarthRoamer HD can be you there. Built on a Ford F750 4×4 chassis, with a 6.7L V8 Turbo Diesel engine you will have no problems tackling the toughest of roads and uphill descents. Its off-road capabilities make driving this vehicle a dream and allow you to take the road less travelled.

While the outside of the EarthRoamer HD may mean business, the interior is like a luxury penthouse. With plenty of room, you’ll find everything needed for a comfortable trip. Plus, the inside can be altered depending on your needs and how many people are on board. Features include a full kitchen, washing machine, bathroom, bedroom and living room. Being in the EarthRaomer HD isn’t at all like being in a camper; it’s more like an executive apartment.

Going right back to basics, we’re discarding the engine entirely with the next camper on our list of crazy campervans, the bicycle camper. Bikepacking has really taken off in the past few years. The idea of being able to complete a long journey, reliant on nothing but a bike and yourself is a fantastic thought. Not so amazing is the nights spent in a cramped tent, sleeping on the hard floor.

That’s where the Wide Path Bicycle Camper comes in, a more luxury alternative to a tent when bikepacking. Just imagine, being able to sleep on a real bed after hours peddling on the trail, heaven. When the camper isn’t in bed mode, giving enough space to sleep two, the area can be used as a dining space for four. 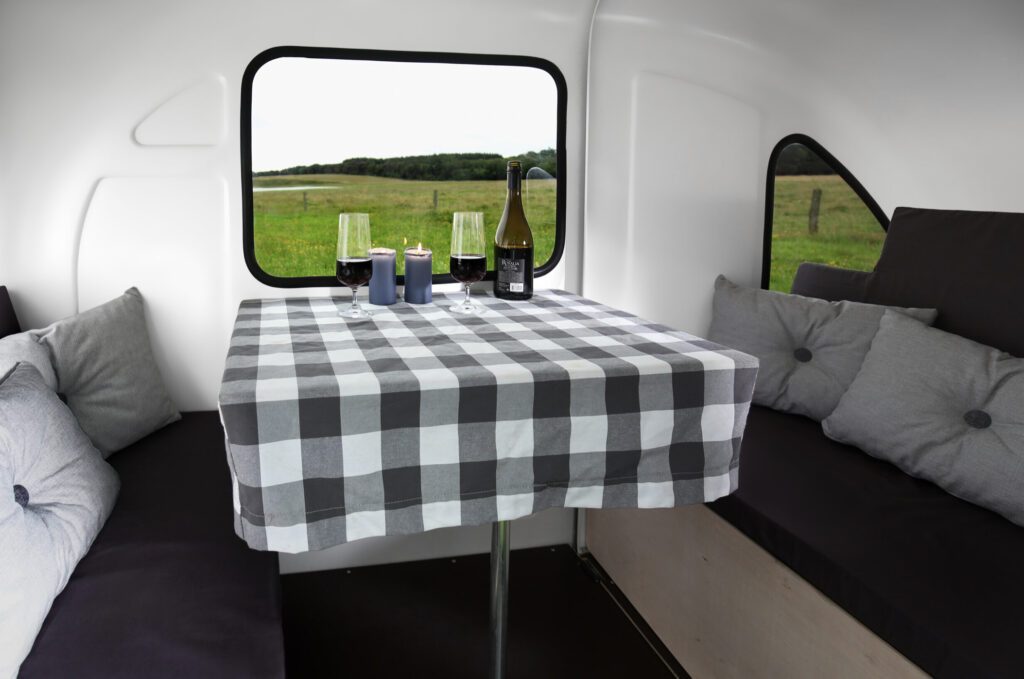 Cooking is an outdoor affair, but with a flip-down exterior table, at least you don’t have to juggle pots and pans on the ground. Plus, if the weather’s not great, you can put up the awning to gain some shelter when making dinner. This space is a huge step up from standard tent camping.

The main downside, of course, is that you will need to pull the camper behind you on your bicycle, which is bound to be heavier than a tent. However, the camper is compact and lightweight, making life easier for you. The whole thing folds in on itself, in just three minutes, ready for the journey. Once you prepare the camper for transit, it measures just 280x99cm, not too big for towing. 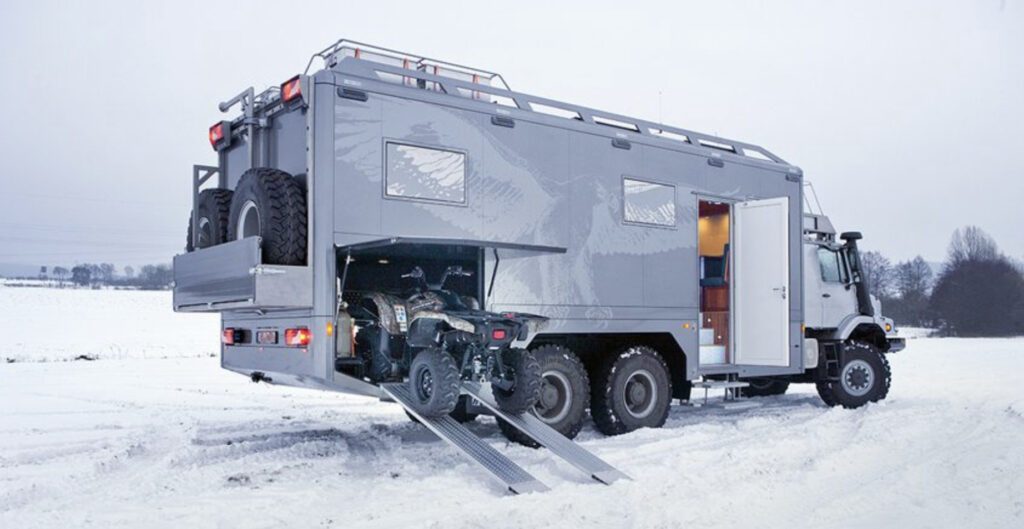 Number four on our list of crazy campervans we have a competitor for the EarthRoamer Hd, the Mercedes Zetros. This is a beast of a camper if ever I saw one, built for extreme exhibitions in the toughest of places. If you’re looking for the best exhibition vehicle, then this is the one for you, a miniature home in a monster of a shell.

This monster camper has a massive 7.2 litre Diesel engine and six-wheel drive. Yes, you read that correctly, the Zetros has not four but six wheels! The six-wheel drive, along with this crazy campervans other off-road capabilities such as a snorkel, huge lift and off-road tyres, means that you can take this vehicle on the toughest of tracks. In fact, throw away the map because for this beast you don’t need roads at all. 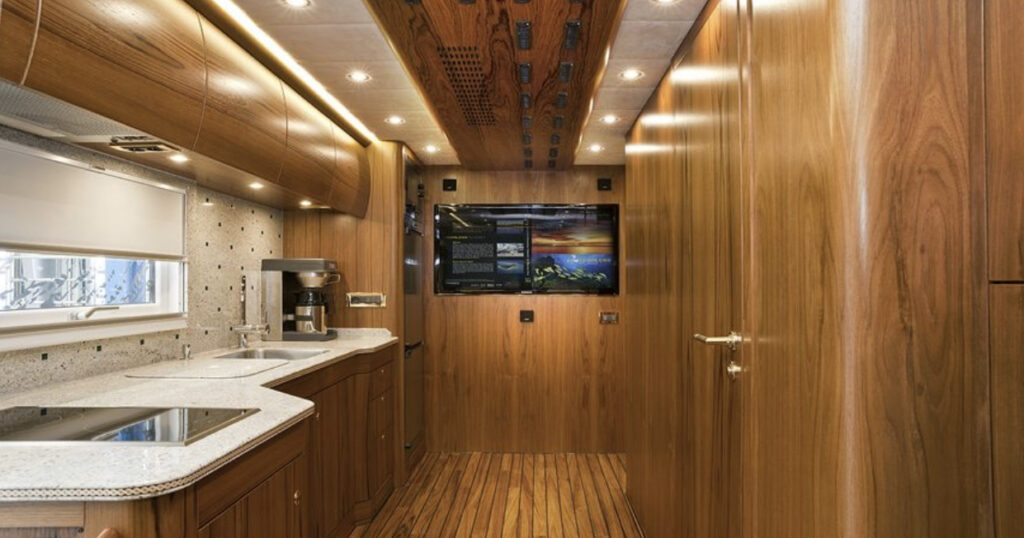 Inside, the Zetros is a sleek masterpiece of design. Full of beautiful hardwoods and state of the art equipment, you’ll never feel like you’re roughing it in the camper. Travelling in the Zetros isn’t really like camping at all, but more like staying in a fancy hotel. Along with the expected full kitchen, bathroom, living room and bedroom, this camper comes with a whole host of tech. You’ve got a huge, flat-screen TV, Bose surround sound, satellite communication system and built-in WiFi.

If all of this isn’t enough for you, then maybe the onboard quad bike will entice you in. That’s right; the Zetros even has room to store a second vehicle inside, just in case one off-road beast isn’t enough for you. All of this, of course, comes at a considerable cost, if you even need two ask then you probably won’t be able to afford this camper anyway…

The last entry on our list of the five most crazy campervans out there is taking us to the future with the Tesla Truck Camper. Tesla made headlines in 2019 over the announcement of the Cybertruck, their latest all-electric vehicle which will be hitting the market in 2021.

The Cybertruck isn’t like any other camper we’ve ever seen, with its angular, geometric design this vehicle looks like something straight from the future. The Tesla Cybertruck wouldn’t look out of place on a space mission! But it’s much more down to earth than it seems and has been designed to have multiple capabilities, including a camping pod accessory. 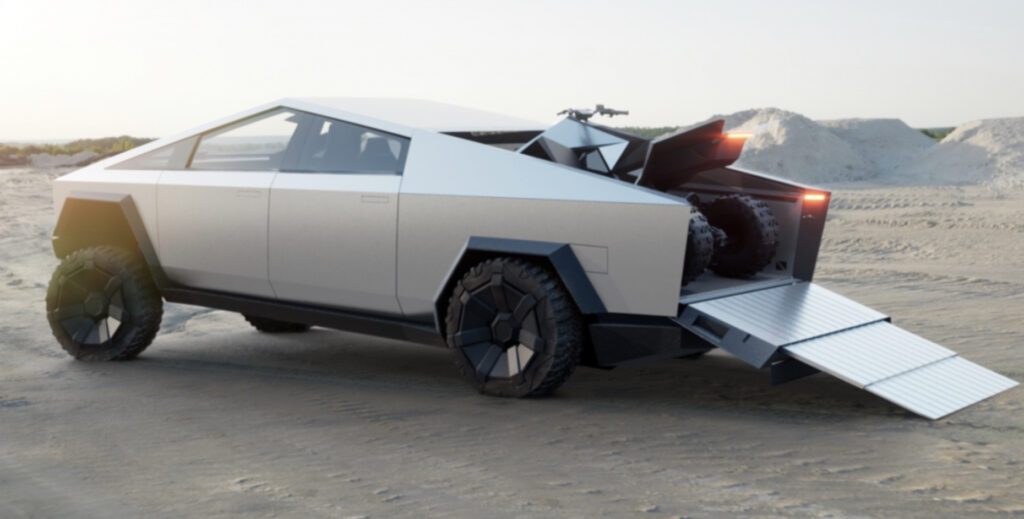 The camper section of the Cybertruck looks as though it will slide onto the back of the truck, much like other truck campers that we’ve seen. This tent extension sticks to the same design as the rest of the latest Tesla model with a futuristic exterior. Inside, it looks like there is a sleeping platform for two, although the Cybertruck itself can sleep up to six people.

An outdoor cooking module slides out of the back of the truck, giving you space to whip up delicious meals on the go. The kitchen does look like a pretty basic set up, but we love the idea of heading out in a luxury Tesla to rough it in the wild. The two things don’t naturally go together, but we love the Tesla camper and are looking forward to seeing its release next year.