Every so often we get to witness the birth of an iconic camper that pushes the boundaries of design, and the Tesla Truck Camper is no exception. The Volkswagen Bus Camper, Polydrop Teardrop Trailers, the EarthRoamer Camper; love them or hate them, these vehicles have all helped to shape van life and alternative living in their own way and are a testament to what hard work and thinking outside of the box can achieve. I would argue that no-one thinks outside of the box more than Elon Musk, which is why we’re super excited by the newest pictures and the ever-growing hype around this futuristic Tesla Truck Camper.

Do you love the idea of Full Time Van Life? Does the thought of cooking up easy campervan recipes on the edge of a clifftop or by the beach consume your every thought? Join our Van Lifers & Weekend Warriors Facebook Group and find out how you can turn these dreams and van life ideas into a reality. Immerse yourself in van life stories, pick up vanlife tips and tricks for your next off grid adventure, and grab some of the van life essentials that every weekend warrior relies on while living off grid.

Unlike the Tesla Bus article that we wrote a few months back, we’re excited to announce that the Tesla Truck Camper is actually going into production and will be available for purchase. The new all-electric ‘Cybertruck’ will come in three different models that vary in range from 250 – 500 miles per charge. The futuristic design and insanely strong and robust build on this truck will make it a must-have for fans of both electric, climate-friendly vehicles and off road trucks – now that’s a sentence that I never thought I would be writing!

What Is This Thing Made Of? 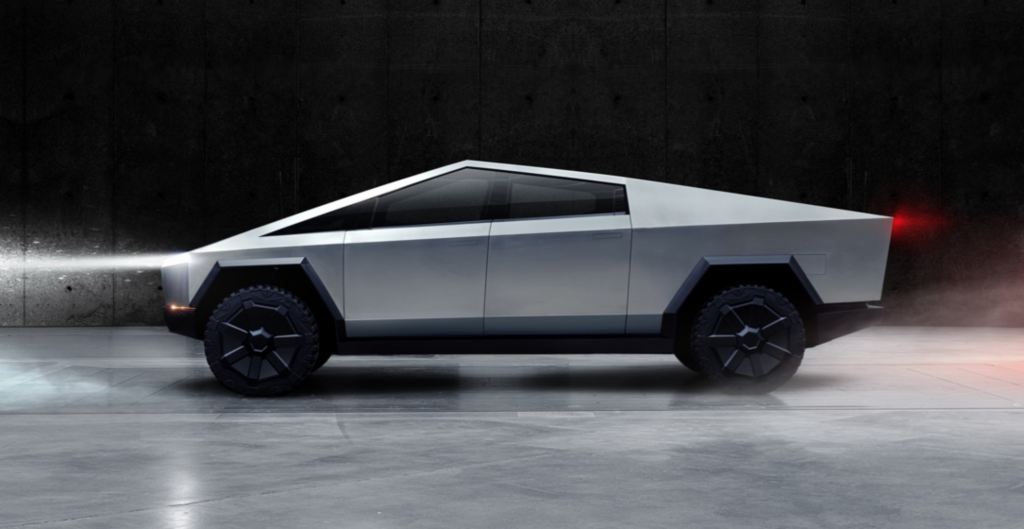 Tesla will be making their new Cybertruck out of cold-rolled stainless steel, 30x rolled to be precise, making this one of the strongest pop up truck campers on the planet! From a design perspective, I love how there isn’t a single curved line on this thing. Even the wheel arch trim has a strong geometric feel to it. This vehicle is like something that you might see in an 80’s music video, but this time it’s real, and those windows in the two side doors look absolutely incredible. I don’t know whether I should be driving this truck or doing barrel-rolls on the edge of the atmosphere!

This Tesla Truck Camper comes with something called Tesla Armor Glass. It’s essentially extra hard glass with a polymer-layered composite designed to spread the force of any impact. Instead of an object cracking your window and making a weak point, anything that bounces against the glass on the Cybertruck will shoot off like a pea, giving you greater damage tolerance for your forrays through the wilderness. 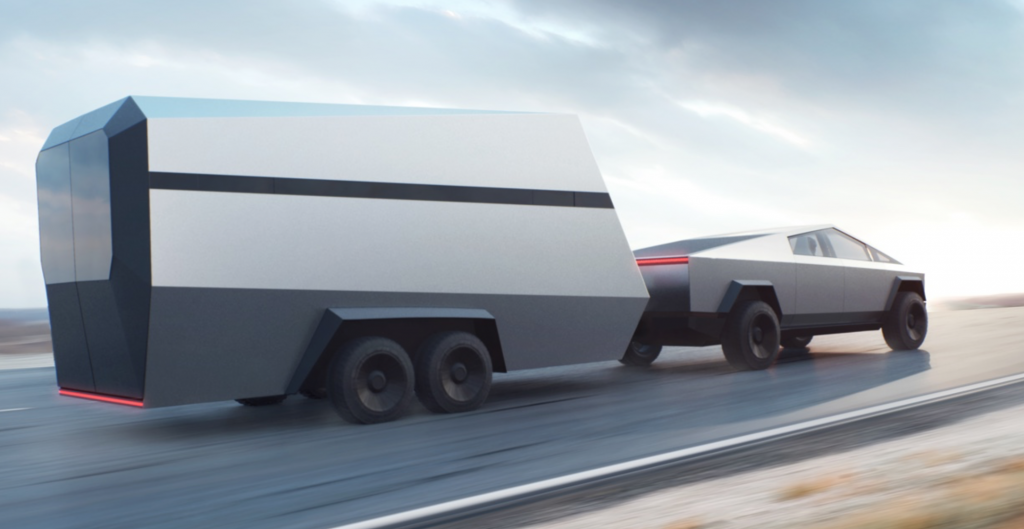 Feed Us Some Facts

So let’s look at some more stats in detail so that we can figure out what this thing does. Now it might look like it’s just a two-person truck from the outside, but this Tesla Truck Camper can seat up to six people on every journey. It might be a squeeze if you want to fit them all up in the pop-top with you, so you’ll be pleased to know that these trucks are more than capable of bringing your small travel trailers along for the journey too.

Choosing a model with a single motor rear-wheel-drive will give you the ability to tow up to 7,500 pounds (3’400 KG) of weight, whereas the triple-motor all-wheel-drive version (which we’ve nicknamed ‘The Hulk-Mobile’) can tow a whopping 14,000 pounds (6,350 KG). We’ve actually got a picture of the Cybertruck with a Star-Wars-esque off grid trailer in tow further down in this article, but we don’t have any more information as to what’s inside it or whether the trailer will be available to buy as part of the Tesla Truck Camper package at launch just yet. When we do, you’ll hear it here first!

What Does The Tesla Truck Camper Come With?

At this stage, we’re just picking apart renders and making 2+2=5 in the process, but there are a few elements on the pictures above that give us an indication of the truck’s off grid living capabilities. We can see a pull-out kitchen area and space for a burner and gas bottle storage at the rear of the camper, further cementing the notion of this vehicle being inspired by the evolution of the off road teardrop camper. With a payload of 3,500 pounds (1.58 T) and 100 cubic feet of storage inside, you won’t have to worry about cramming the Tesla Truck Camper full of your favourite top cooking accessories or other gadgets and tools that you like to take along for the ride. There’s even enough space to pack one of these inflatable Bluefin Paddleboards for your adventures. 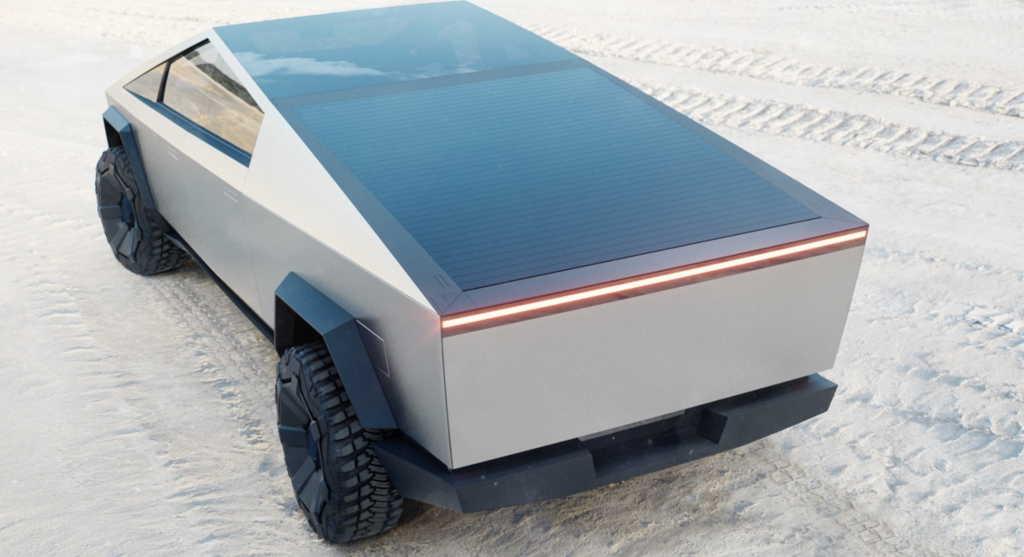 Perhaps the most exciting part of the pictures that we’ve seen so far is the space-age pop-up part of the camper, which can be installed and removed as-and-when you need it. Tesla know how important the van life movement is across the world, but whether their move into creating an electric truck camper is to do with pleasing the people or combatting their rivals in the field remains unknown. Rivian are releasing their new range of electric campervans at the end of 2020, whereas Tesla fans will have to wait a little bit longer to see the Cybertruck on the roads, with a projected launch-year of 2021. 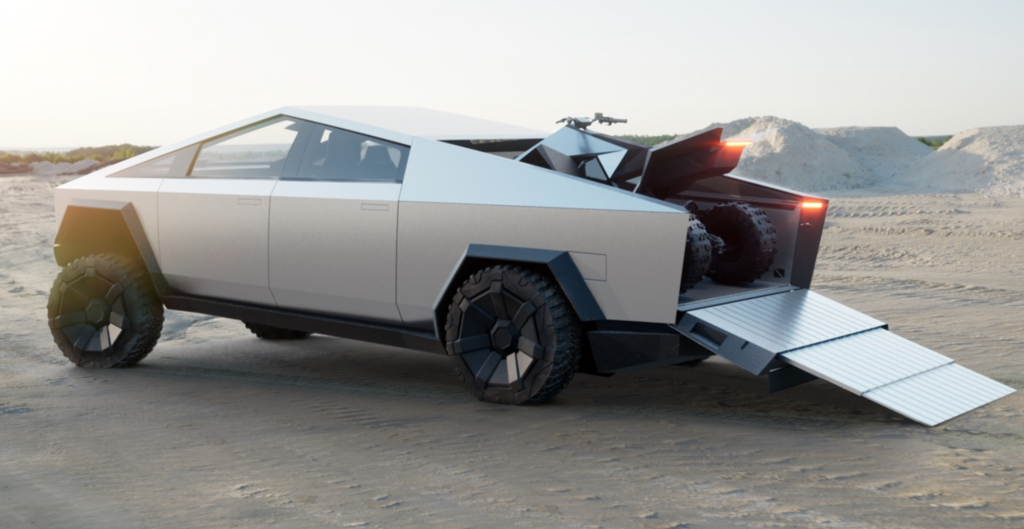 With the camping pod out of the way, there is plenty of room for your travel bikes and even an ATV in the back of the truck. Just check out that Millenium Falcon style slide-out ramp too; everything about this truck feels like it has come from the mind of a 4-year-old crafting his or her first spaceship. It’s the kind of vehicle that makes you excited just looking at it, even if you know you’re probably never going to own one.

We’ve touched on using the Dreamcase to camp in a Tesla Model S, a car that has an insane built-in battery that can allow for climate control features all night long. This process doesn’t drain the battery or alert people to your presence through noisy tailpipes or the tell-tale-ticking of a diesel heater; we can imagine that this same feature will be used in the Tesla Truck Camper and that the sleeping set up will be fairly similar too. 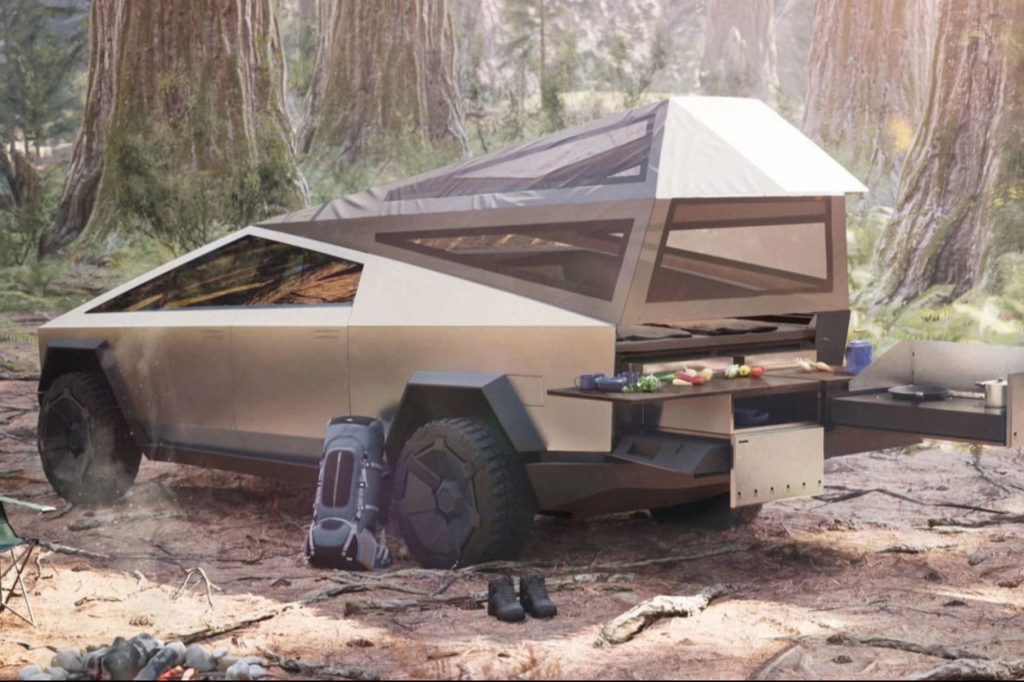 From what we can see on the pictures, it looks as though there are two roll mats or sleeping bags up in the back of the pop-up tent. It’s not exactly the height of luxury, but it’s not as though we’re talking about the $100’000 EarthCruiser here. This is a camping module that slips onto the back of a gnarly off road truck; aside from a few window vents, it’s probably not going to have much else inside. Still, a safe, dry roof over your head and the ability to cook up tasty meals on the go is all you need for a trip into the wild, so it certainly has our vote. We imagine that the truck itself will have all of the capabilities for charging up phones, laptops, and drones on the go, so don’t worry if you’re a digital nomad who likes to mix work and pleasure on the go.

I’ve been waiting a long time to see Tesla make a gnarly camper, but it’s a surprise that they’ve gone in for a truck instead of a van conversion like the VW Buzz. Still, I guess I should have seen this coming; travelling in a truck is the best way to drive across America, after all. The comfort, durability, and the ability to get over anything that stands in your way are far more impressive than what I experience while travelling in a van in the front of my trusty Vauxhall Movano, and the fact that the Cybertruck will be an all electric campervan will be a huge win for eco-conscious vandwellers across the globe. 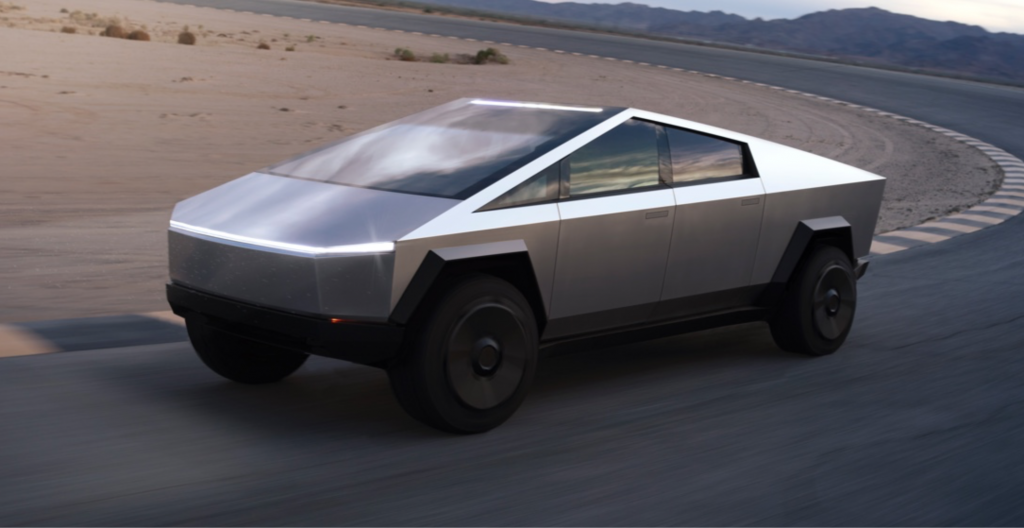 This Tesla Truck Camper is a feat of engineering, and I for one can’t wait to see one pass me on the road while driving through Silicon Valley. If you are itching to put your name down for one and don’t want to miss out, then head over to the Tesla website and pre-order a Cybertruck today.