Is the future really all about electric vehicles? Read our 2020 Nissan eNV200 camper review to find out what campervan journalist Kate Taylor discovered.

“UK could ban sale of new petrol and diesel cars in 12 years,” was the headline-grabbing announcement by Transport Secretary Grant Shapps in February 2020. The prospect of a ban by 2035 – or even 2032 – was a huge shock, since previously the vehicle manufacturers had been working towards a 2040 deadline. Previously it had looked as if hybrid (petrol-electric) vehicles would be exempt – but this would no longer be the case.

Switch from diesel to electric 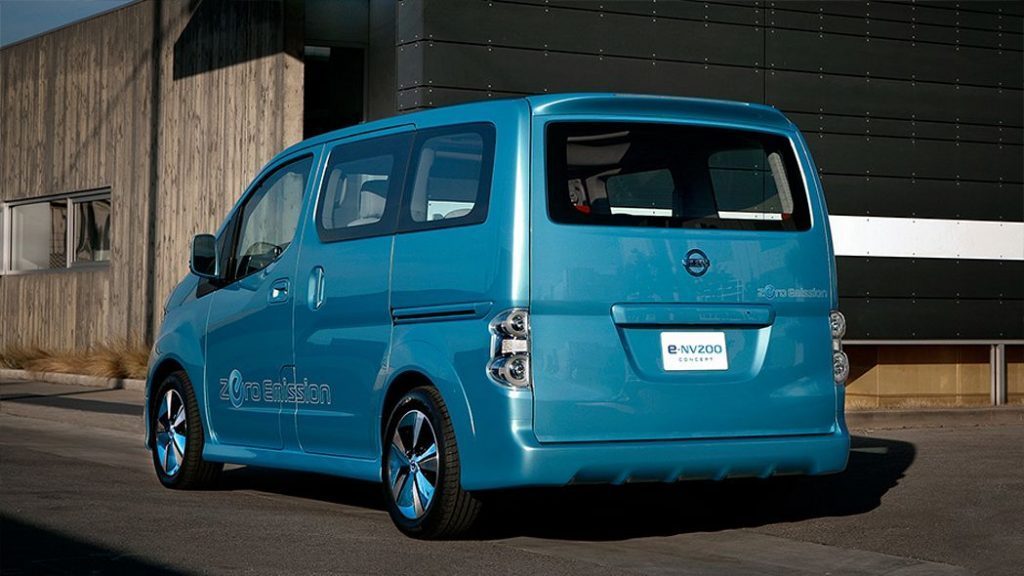 Speaking to The Guardian newspaper, Mike Hawes of the Society of Motor Manufacturers and Traders said it was a “date without a plan”. He is lobbying for more help to achieve the targets in time, perhaps in the form of grants for manufacturers to help them develop all-electric vehicles.

There are also concerns about how to provide the infrastructure needed for consumers to charge up millions of electric vehicles during their journeys. Imagine if the Van Life America trend boomed, but there wasnt enough charing points? Mayhem!

Volkswagen has announced that it plans to sell a million electric cars by the end of 2023. But where does this leave van manufacturers?

Will we see electric vans with the range and power needed to shift heavy loads and travel long distances any time soon? This is a burning question for campervan conversion companies and motorhome manufacturers, too. 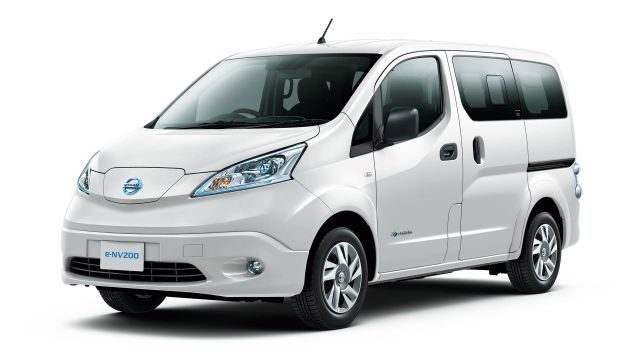 Nissan has been leading the world in terms of mass-produced electric cars for some time. It launched the Nissan Leaf car in December 2010. This is now the world’s best-selling plug-in electric car, offering a range of 151 miles when fully charged. The Renault-Nissan Alliance has now spent billions of pounds developing electric vehicles and improving the batteries.

Nissan designed a small panel van, the NV200, to be suitable to adopt the Leaf powertrain and battery system, from the ground up.   Initially, fossil fuel versions were strong sellers, although the plan was always to introduce a fully electric van when the time was right. 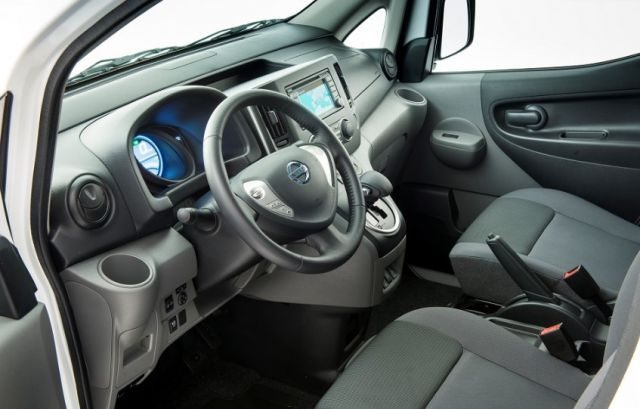 When the Nissan eNV200 utility van was first launched in 2014 there was enormous excitement – until owners reported that the 24 kWh battery could only deliver a range of 60 to 73 miles in real-world conditions, before it needed to be recharged. 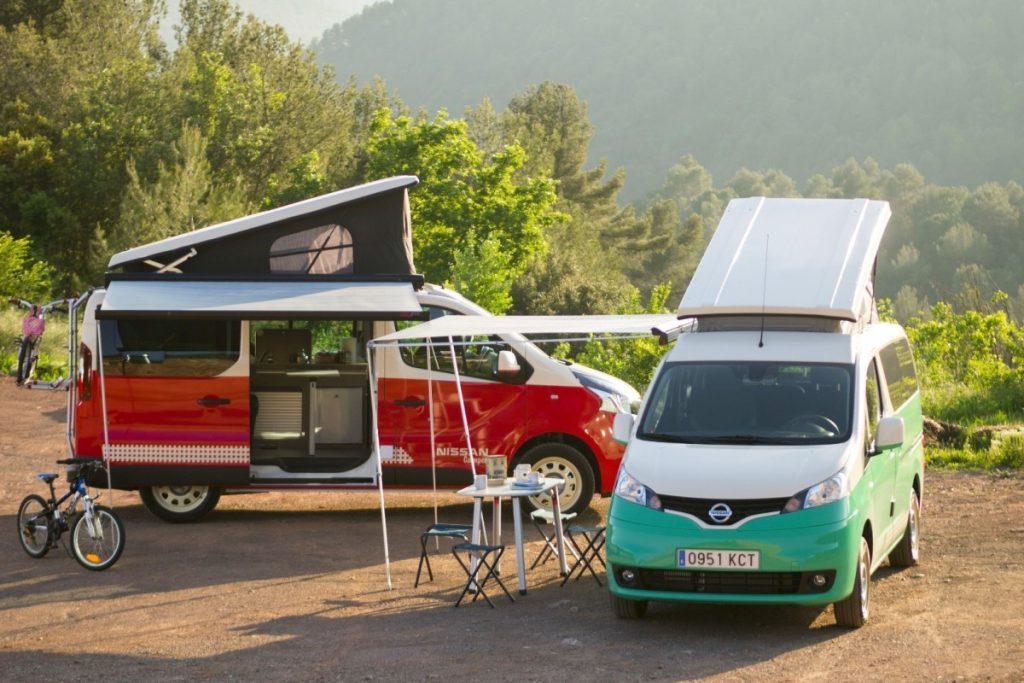 A small van conversion company launched its prototype electric campervan, the Dalbury, at the NEC Caravan & Motorhome Show in 2014. It hit the headlines as “The first electric campervan” but was never produced in any numbers. You could lease the battery from £61 per month, or buy it outright for around £4,000 back then. Consumers liked the idea of low-cost motoring (2p a mile), zero road tax and zero emissions – but with such a short range between long recharging stops it just didn’t make sense for most holidays. There was also a national shortage of charging points for electric vehicles.

Fortunately in 2018 the second generation ENV200 was upgraded with a 40KWh battery giving a quoted 174-mile range. If the van is fully loaded, that range may shrink to 100 miles. If you can charge it at home the fuel cost is tiny. It’s ideal for city use, where driving old diesel or petrol vans can work out very expensive, due to hefty  low emission charges. There are road tax benefits, too.

Several large fleets are still running the original e-NV200 which they put into service in 2014, and have found performance and reliability to be superb; they are still giving good service without issue. 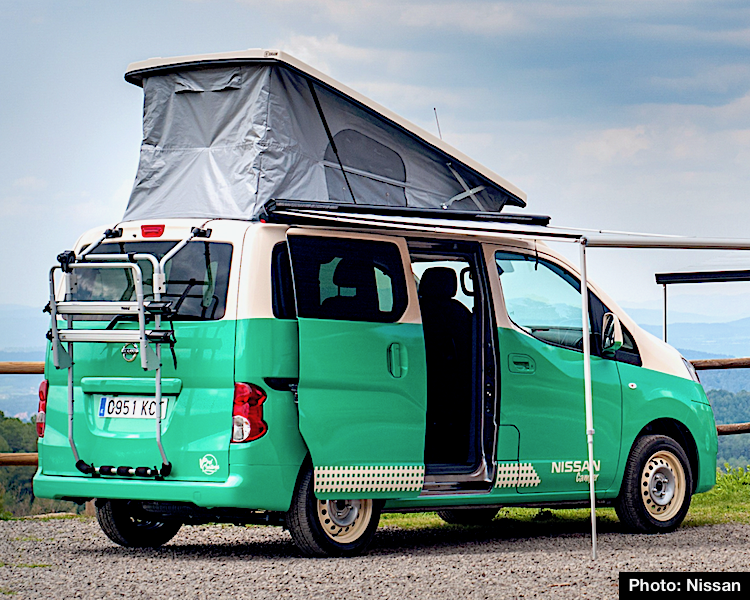 The eNV200 comes as a compact panel van, or a 5-seat combi van (with side windows) or a 5- or 7-seat Evalia people carrier. It’s quite tall for a small van, which means that it has a good capacity inside, yet is easy to park in tight spots.

Both the diesel NV200 and the electric eNV200 offer 4.2 cubic metres inside. The diesel version has a payload up to 752kg, while the eNV200 payload is up to 701kg. This is because the electric version mounts the batteries under the floor, to allow for more loading capacity behind the cab. Also the weight of the batteries is not vastly different to the weight of a traditional engine. 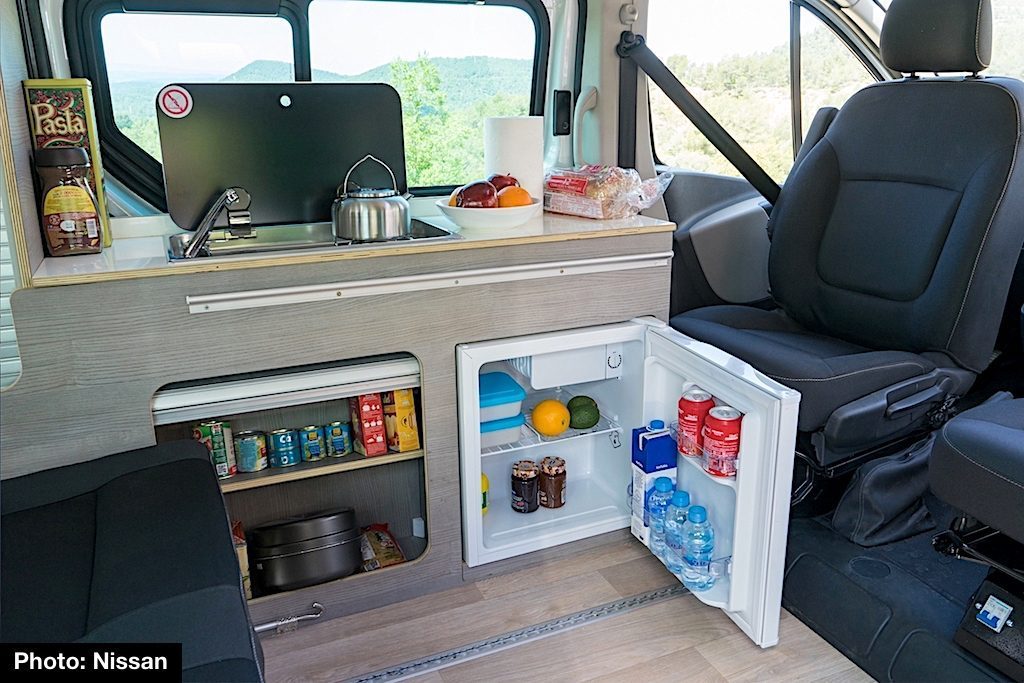 Fast charging is possible, thanks to the onboard 6.6kWh charger allows the battery to be charged to 80 per cent in half an hour at a compatible Tanamo Quick Charge Point. Otherwise it takes 8 hours on a 32 Amp wall box. He suggests using eco mode to improve the range, by slowing acceleration and also by recovering energy during coasting and braking on a journey.

Good stability on the road

The weight of the batteries mounted beneath the floor means that this agile little eNV200 has a low centre of gravity, making it feel more stable on the road than the diesel or petrol NV200 vans. Its not going to compete with the best adventure vans, but dang will this be great for those city roads. 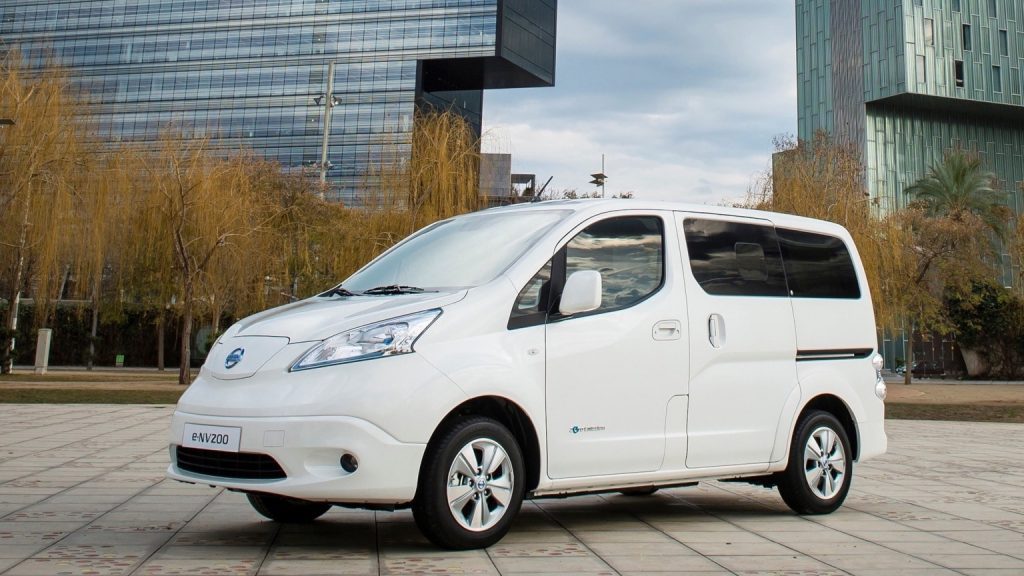 The engine is quiet and smooth and the running costs can be as low as 2p per mile, depending on the charger you use.

One of the criticisms of electric vehicles has been that it will take years for there to be enough fast charging points to be available. In fact the infrastructure is growing rapidly, as  you can see from this map of charging points for EV drivers. https://www.zap-map.com/live/

In addition, the online parking portal YourParkingSpace.co.uk has expanded and now lists homeowners with an empty driveway and EV charge point, who rent them to EV motorists who pay to park and charge their vehicles.

Nissan offers its 5-year or 60,000-mile warranty on the eNV200 and a separate 8-year or 100,000-mile battery warranty so that it should be covered if it loses more than 25 per cent of its original capacity during that time.

There are three trim levels to choose from. Please note that these are just the base vehicles and a camper conversion may be more expensive. 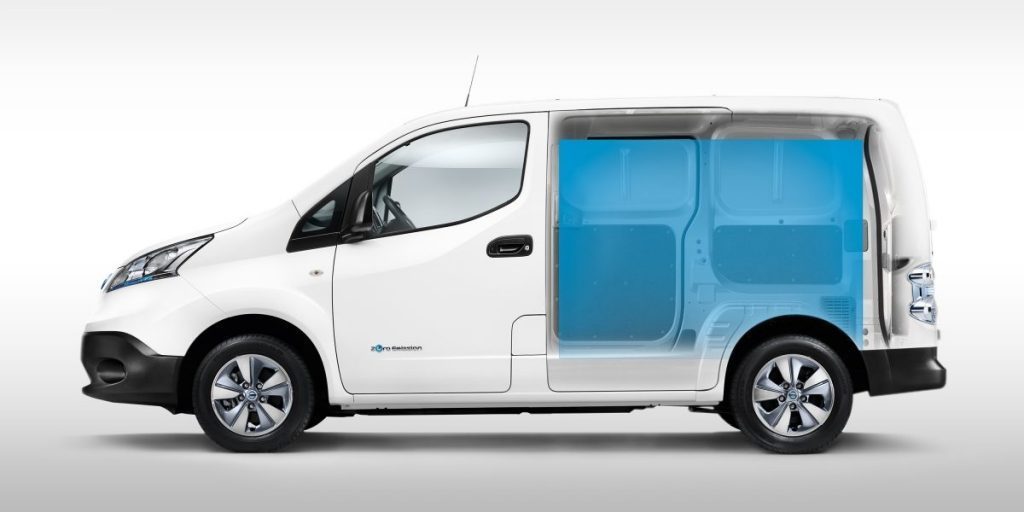 Storage in the ENV200 van is small and basic and everything is pretty much on show in the cab. There is an optional under-seat plastic storage tray for the driver’s cab seat and a small plastic container that fits between the seats. These allow you to hide small items from passers-by.

The ENV200 is the most versatile all-electric small van on the market. It has the best load capacity for a van of its size, thanks to its height. Add the superb Nissan warranty and its ability to be fast charged in half an hour and we think it is the best little electric van on the market. Consider the astonishingly low running costs and zero carbon emissions and we think the ENV200 is an all-star winner. At last there are now thousands of electric charging points available (https://www.zap-map.com/live/) and initiatives such as the YourParkingSpace app allowing home owners to rent out their EV charging points when they are out. We recommend the ENV200 particularly for delivery drivers with a small local round, and for small trades people.

One progressive campervan company is now converting the ENV200 into its successful CamperCar range. This builds on the success of the diesel and petrol NV200 CamperCar by Sussex Campervans. Going all-electric is the future, and campervan companies are as keen as anyone to embrace a greener future, to improve air quality and protect the natural world that we all love and need to thrive.