Patriot Campers LC79 Is The Off-Road Transformer Of Your Dreams

Patriot Campers – Anything But Standard

Have you ever seen anything as awesome as this Patriot Campers LC79 Super Tourer? Half tie fighter, half off road behemoth, this custom camper is the one of the few things that could survive an apocalypse.

Based on a very capable offroad platform with V8 turbo diesel power, the LC79 has been taken by Patriot Campers to a whole new level in style, capability and comfort whilst still retaining the factory backed warranty on any unmodified accessories.

This is one mega 4×4. If you’re the kind of person that likes to get their coffee beans fresh from the inner sanctum of a rain forest, then this is the only machine to get you there.

Made from marine grade aluminium, the LC79 is remarkably light for such a juggernaut. The official facts and figures from Patriot Campers boasts a tray body length of 2.20M, and a width of 1.86M, with an overall tray weight of 350kg.

Before we go any further, I need to talk to about just how much storage there is for tools and accessories in this thing. There’s front and rear toolboxes on the left and right, and a huge pull out drawer that comes from underneath the spare wheels…..thats right, WHEELS. Because when you’re an off road king, you never know what you might be driving into. There’s a total of 138l of toolbox storage, and room for 115 litres of water. That should be enough for any trip you need to take to recreate the star wars scenes in the desert. 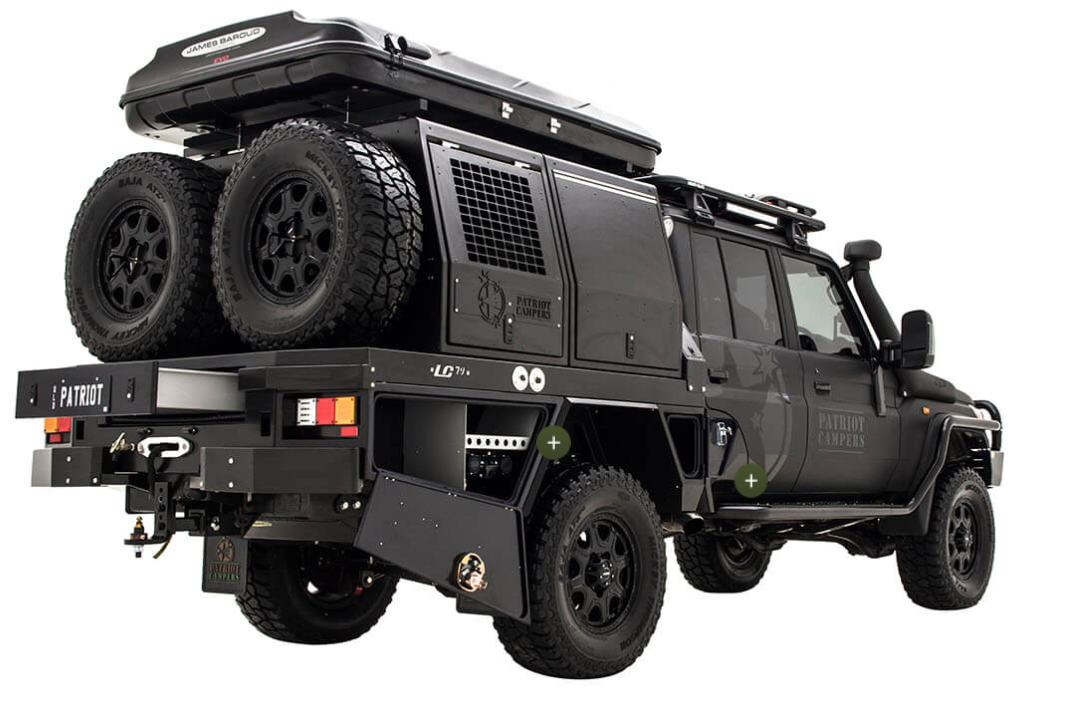 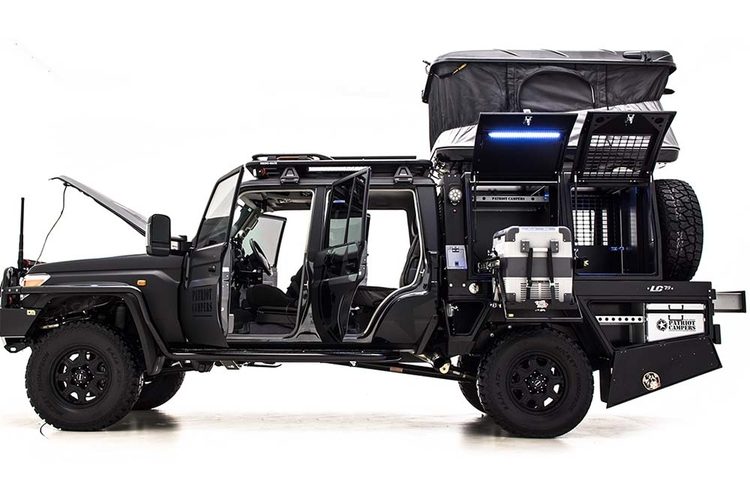 In the cab we’ve got two Recaro seats that are specially designed to limit fatigue, and keep you supported and relaxed whilst you’re flying over those rocky mountains. Up front we’ve also got 2 X-RAY 220 HID lights that can shine up to 2km away from the truck. Thats some serious beamage; you’ll have no problem lighting your way in this beast.

There’s an overhead Tshape in the cab for (you guessed it) more storage, and a handy centre console. At the side there’s a fridge slide that holds appliances up to 65 litres, so plenty of room for beer and sandwiches whilst on the road. Here is where you’d find the mini canopy, which is where you can house all the components for your 12 volt system.

If you’re dog sitting then theres a dual dog crate tray in the back with vents, but it can also be changed into another goliath storage area if you don’t have any canine pals.

But where do I sleep?!

Eagle eyed readers might have spotted the  tent on the very top of the LC79’s roof. Patriot campers really have thought of everything! Named the ‘James Baroud Evo Tent’, it boasts a 5 second set up time, high density foam mattress, and that ‘well earned rest’ factor after you’ve conquered Everest in it.

Price time. Patriot Campers advertise this at just over $90’000, which is just under £52’000. It comes in as a good price for what it is, which is a Tardis on wheels. If I’m ever in a situation where I need to get two dogs and 65 litres of ice to a rendezvous in the outer Hebrides, I know which vehicle I’m taking.