When the fatal virus drops and the zombies come running, there’s only one 4×4 RV that we’ll be spending our hard-earned cash on. It’s called the Showhauler, and it’s going to blow your mind!

We try out best to cover RVs that can be used all year round here at Van Clan. We pride ourselves on showcasing affordable vehicles that we common folk could purchase without drawing out our life savings, modest campers that don’t attract too much attention.

But every now and again, it’s fun to break the mould!

If you look at a Winnebago and find yourself wishing it looked more like an armoured vehicle, then you’ve certainly come to the right place. The Showhauler 4×4 RV is an absolute behemoth. Close up, it looks more like a beige version of Optimus Prime from the Transformers movies.

The Showhauler is one of the only campers I’ve ever seen with a steel-plated bull bar on the bumper, and it can hold enough provisions for you to stay off the grid for several months at a time.

Now you can barge zombies out of the way and eat like royalty with ease!

Getting To Know The Showhauler 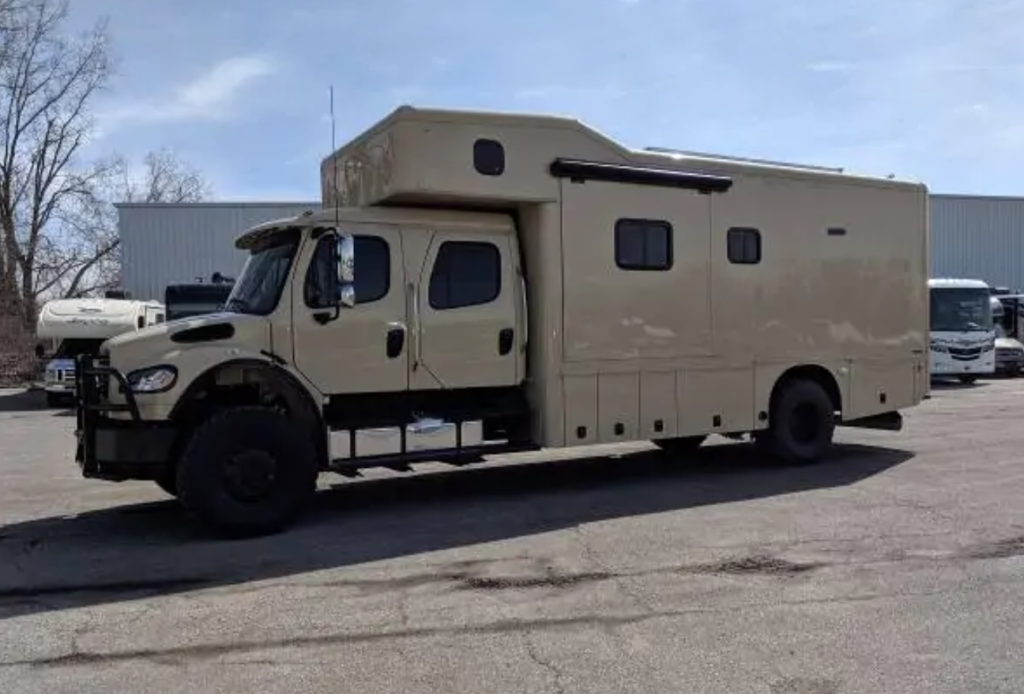 This monstrous 4×4 RV is available from a company called Terry Town, which sounds like a business venture that Terry Crewes would bring up in an episode of Brooklyn Nine-Nine.

The Showhauler certainly has the same amount of power as Sgt. Jeffords, and it’s built for the most extreme off grid adventure trips known to humankind.

The outside might look gnarly, but the main interior revolves around a 2017 Business Class Freightliner Chassis. The coach living interior is pretty stylish; we’re talking Earthroamer camper style cool!

Back to the outside. These monster off road trucks gets around on 44” Firestone military tires. Never mind driving across State lines; this beast can drive across the world without breaking a sweat!

The Showhauler has a whopping 350bhp, is 4-wheel drive (it would be weird if it wasn’t), and it can tow up to 20,000lbs. I don’t reckon I would drive one myself, but I’d like to go on an adventure with someone who does so that they can pull me out of sticky situations. 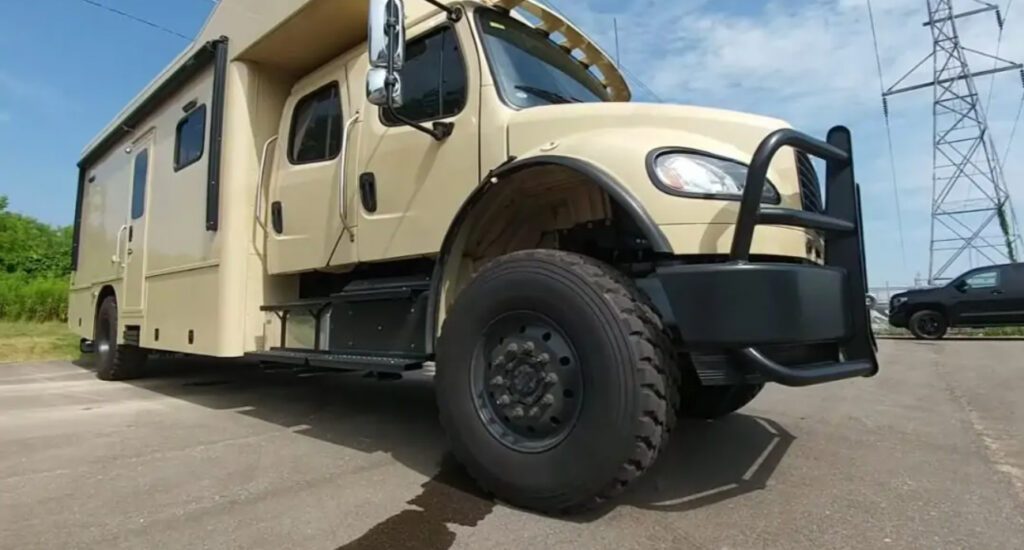 This 4×4 RV has front and rear locking differentials, something which off-roading fans and mall-crawler haters will be happy about.

There’s also an 8.9L Cummins Straight 6 Power Plant engine under the bonnet (or hood if you’re one of our American readers), which is ‘lots of power’ for anyone who isn’t an ‘engine-head’.

Is It Suitable For Families?

Are you kidding? This thing was made for familes!

Once you see the space inside, you’ll understand (and I promise that we’re slowly getting there!). The front cab area is spacious and can seat up to five people. There’s four doors up front, so you don’t have to clamber over each other to find a seat.

Part of the cab even transforms into a sleeping area. Now that’s clever!

If, like me, you’re the kind of road tripper that likes to spend more time off grid than in campsites, then the Showhauler has you covered. 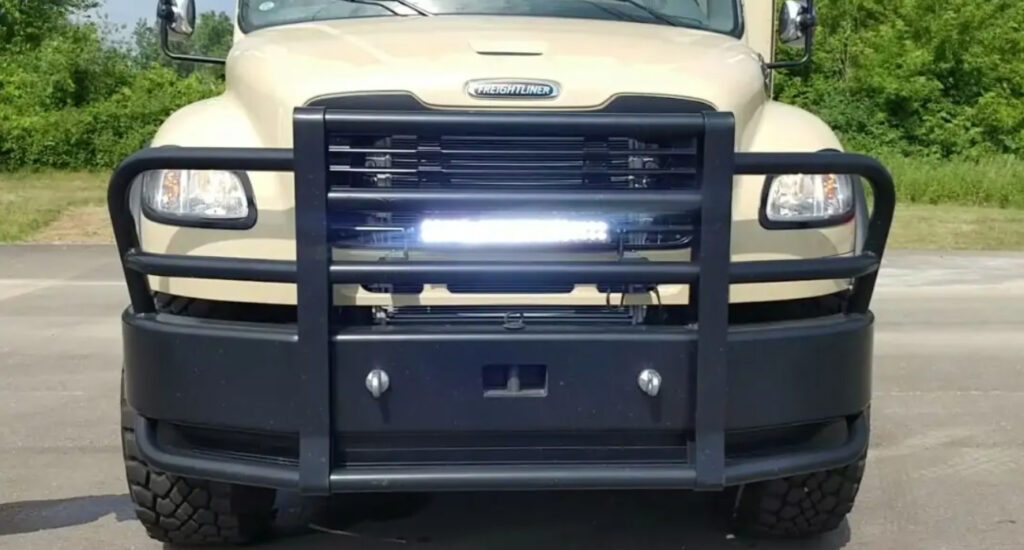 This 4×4 RV has an 80 gallon water tank underneath the main chassis. That’s almost 364 litres! You should be able to go for at least two weeks with that as long as you think about your consumption. Better start showering in streams and learning how to wash the dishes like a pro.

There’s also a backup diesel tank that can hold 50 gallons of extra fuel. Now you can travel without having to worry about ever running on empty.

As well as all of the cool features above, the Showhauler has a front-mounted light bar, external storage lockers, and expanding sidewalls to give you even more space once you’re parked up.

Checking Out The Living Quarters 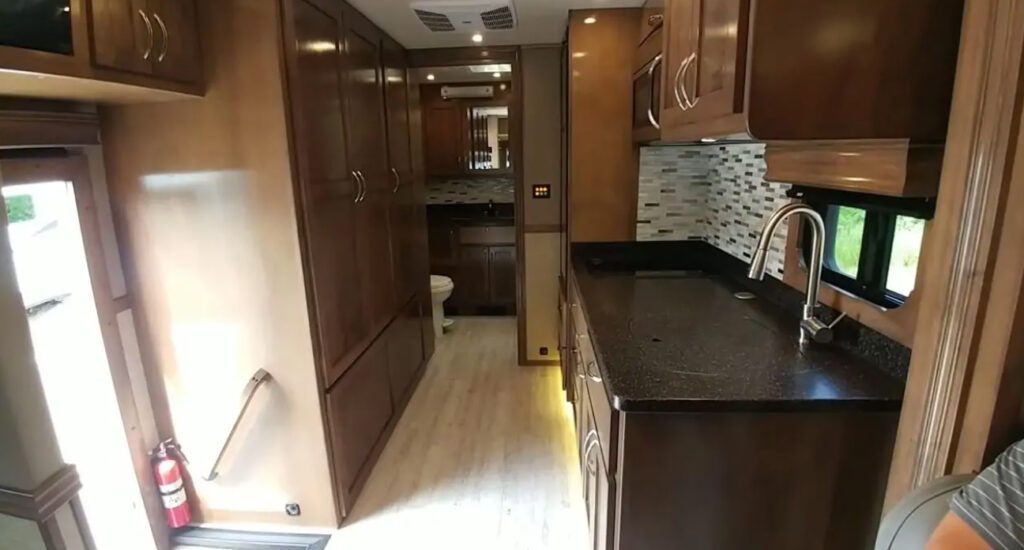 I’m always surprised at how these ultra-adventure military trucks can look so tough on the outside but so smooth and sophisticated on the inside. In many ways, the Showhauler and I are very, very similar…

The ceiling in this 4×4 RV is pretty tall, making it a great place for morning Yoga if the weather is terrible outside. Unlike some conversions with a static bed at the back of the bus, a queen size bed can be found over the top of the cab.

If you don’t fancy traversing a ladder when you go to bed, then the three-seater sofa behind the dinette/storage area can be converted into a comfortable looking bed. 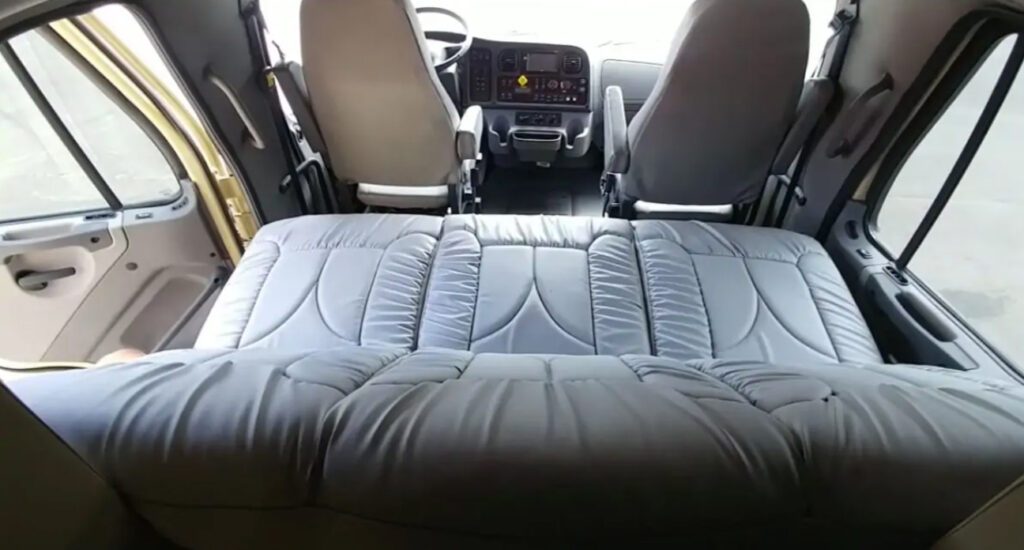 Still need more sleeping space? Luckily for you, theres a single bunk for a wriggly sleeper to take just above the sofa. Remember the sleeping area in the cab too? The whole back seat converts into yet another bed.

Seven people can sleep comfortably in the Showhauler. It can only seat five, however. But, if you’re travelling as a group with a car in tow, then it means you don’t have to cast out two members of the party into a tent!

What Other Features Does This 4×4 RV Have?

If you like a proper place to do you ablutions, then you’ll be happy to know that the Showhauler comes with a fully-fitted bathroom. There’s a real porcelain toilet in here too (none of that plastic rubbish!). 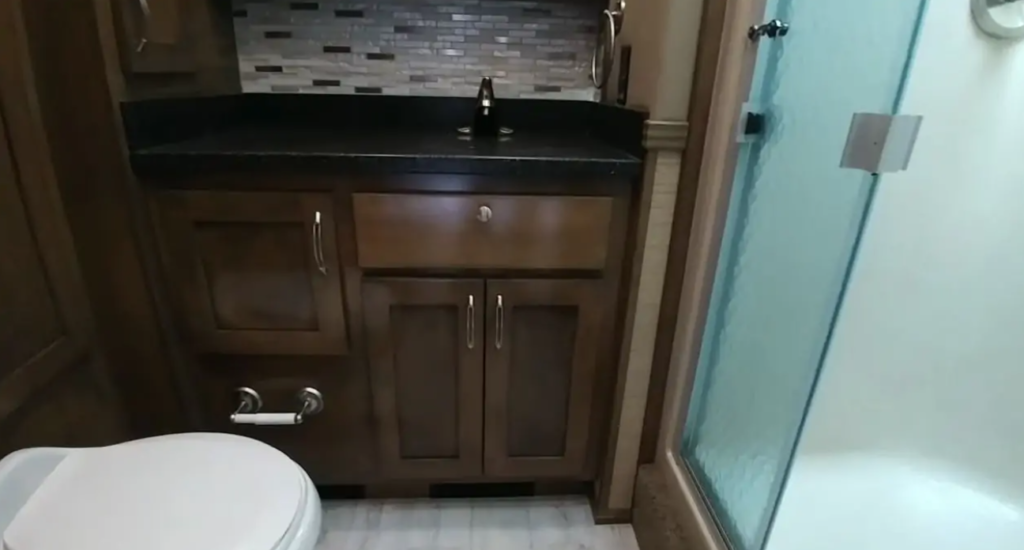 You can scrub off the day’s dirt in the double-sized shower, or grab a quick wash in the basin. There’s even a stone splashback area – talk about fancy!

No-one can survive without whipping up a tasty meal on the road. This 4×4 RV has tonnes of kitchen space and room for all of the most important top cooking accessories on the market.

Every Showhauler comes with (get ready); an induction hob with two burners, a full size fridge for all of your snacks, a microwave, a spacious sink and tap, plus easy-close drawers that won’t slam about while you’re driving.

A big Minotaur like the Showhauler is gonna’ need a big power system to make it tick. This 4×4 RV comes with two AGM batteries, each rated at 245Ah.

It’s surprising that it doesn’t come with a Lithium-Ion set up, but I suppose the 8,000W diesel generator makes up for that.

The camper also has a monster 520W solar panel up top to keep those batteries topped up, and there’s a 2,000W inverter which should be able to cope with everything from hairdryers to power tools.

Don’t worry about having to get washed in cold water either. The Showhauler has something called an Oasis Zephyr Hydronic water heater. It provides 33,000 True Output BTU to keep your home and your water toasty all year round.

This 4×4 can not only withstand any terrain, but also any weather that Mother Nature might throw its way!

If the weather is terrible, then you can take advantage of the included satellite TV package. You can watch your favourite shows on the HD TV, or brave the storm underneath the Power Pro weatherproof awning. Talk about choice!

With a GPS radio and a backup monitor on board as well, you’ve got everything you need to stay safe and relaxed off the grid.

This camper isn’t for the faint of heart. If you like holidays that pack more of a punch than Chuck Norris riding a thundercloud, then the Showhauler is the vehicle for you.

Still, it’s a pretty impressive vehicle. If I was brave enough to drive it, I could see myself crossing the United States in it and pulling into BLM to enjoy the sights of the wilderness with no problems at all.

Most of the campers from Terry Town (Terry loves campers!) are custom made to order. You can occasionally pick up a Showhauler second hand for around $350K. That’s a mighty-fine deal considering the Earthroamer, which is smaller, costs just short of $1million!

If World War Z was almost upon us or the Titans came back for another battle with Zeus, then this is the camper that I’d want. Until then, I’ll stick with a converted Promaster and save my pennies.

What do you think about the Showhauler? Is it a 4×4 RV God or a pumped-up pointless camper?

If you’re looking to turn your pick-up truck into a camper at a moment’s notice, then you need the Topper EZ Lift. It’s a simple bit of kit that not only transforms your truck, it also provides you with a cheap way of getting off-grid. We cover a lot of campervan conversions and RVs here […]