Slab City – A Campers Paradise Or An Off-Grid Bandit Town 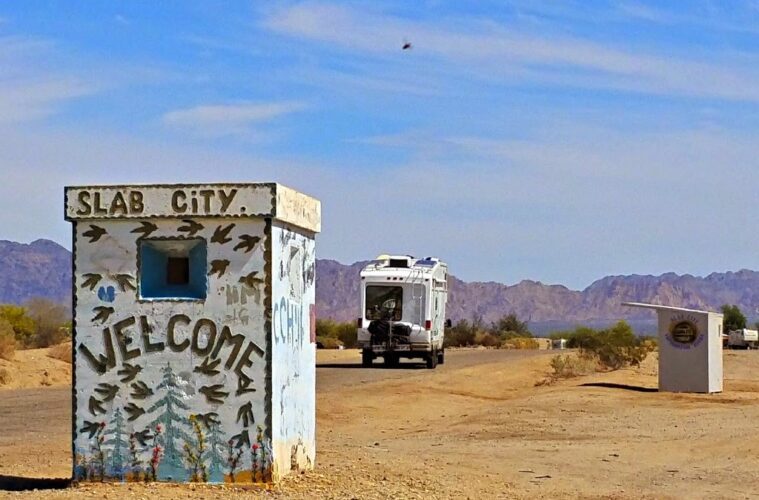 If you’re a vanlifer or have spent any time living off the grid, then you’re bound to have heard of the fabled Slab City. It’s like the wild west of campervan park ups, a motorhome Valhalla if you will.

You’re in California, trundling through the Sonoran desert (which sounds as though it’s been pulled out of a Legend Of Zelda game). The sun is beating down, and in the distance, you see a faded sign. The heat haze makes it look like a mirage, but it’s real all right …

For many, Slab City appears as this mysterious, hippy commune in the desert. Some people have told me that it’s like Burning Man festival crossed with Glastonbury but every day of the year.

Exhibitions, art installations, drugs, partying – it’s like real life GTA! I guess you kind of have to expect a certain amount of freedom and debauchery when thousands of campers congregate together on a decommissioned, uncontrolled area of desert.

Have we tempted any of you yet?

What Is Slab City?

I guess that’s the most important thing for us to cover before we go any further with this article.

Where is Slab City?

Slab City can be found 4-miles North-East of Nilland. It’s Californian desert land and a perfect location for vandwellers and people looking for Winter sun to get away from the chill during the colder months.

It’s a prime location for what many refer to as ‘snowbirds’. These are people who migrate to hotter climates and dedicate their lives to the great god ‘Thermometer’. I call them ‘sun seekers’, though one Australian guy I was talking to once referred to them as ‘pratts’.

That last bit is a true story!

Even though Slab City is technically an off-grid tourist town, there are a handful of hardcore ‘slabbers’ who call this scorching-hot piece of wilderness home all-year-round. Some of the residents have moved there by choice, while others have had to relocate due to poverty.

Some, however, have moved there to escape the long arm of the law, or so the rumours say.

Land is divided up by beer bottles lined neatly on the ground. Rubbish bags have made their own kingdoms, and the place has a general feel of lawless abandonment to it. Imagine a post-apocalyptic fairground, and you kind of get an idea of what Slab City is like.

The temperatures during the summer can get up to a whopping 120°F (49°C) – it’s certainly not for the faint-hearted vanlifers amongst us!

Things To Do In Slab City

Like any other city, Slab City has a range of attractions and facilities to keep it’s visitors and regulars occupied.

Unlike other cities, you don’t have to pay to park up here. There aren’t any utilities, so to speak, and many of the residents rely on solar panels for electricity.

Before you get to the heart of Slab City, you come across an art installation called Salvation Mountain. For many, taking a snap of this dedication to creativity and a general love for God is enough. They can say they’ve checked out Slab City and had a thoroughly good time.

But they haven’t even scratched the surface!

This project, created by Leonard Knight, is a small hill that can be found east of Route 111. It’s around three-stories high, covered from base to summit in latex, and decorated with paint, concrete, and various bible verses. It took two decades to finish!

Once a trash-strewn field, this off-grid part of Slab City is half art installation/half campervan haven. It’s a place where the concept of rubbish is just well…a load of rubbish!

The name has nothing to do with religion. It refers to a place without any state or council utilities. It’s a place where everyone looks after everyone else and gets by without ‘the man’ looking over their shoulder.

Back in 2007, a tech expert named Charlie Russel gathered up all of his possessions, stuck them in a shipping container, and carted it off to the Sonoran desert. He began making art sculptures with the trash he found nearby, and the idea for East Jesus was born.

The ethos behind East Jesus is ‘reuse everything’, which is a mantra that we should all follow, come to think of it.

Rubbish, unwanted items, and unloved belonging are continuously being put to use. They make up the bones of new statues, installations, and poignant pieces of art.

East Jesus has it’s own stage and entertainment area (which we’ll touch upon next). It also has it’s own electrical system comprising of solar panels and unwanted batteries from telecom companies. Now that’s smart!

Slab City is a melting pot, a place with many different people coming together from all walks of life. As you can imagine, the arts play a huge role in bringing everyone in East Jesus under one community banner. The Range is the place where they showcase their talents.

The Range stage is famous. Every Saturday night (and many other nights besides), the residents of Slab City gather to watch fellow visitors, local bands, and sometimes big names perform.

People kick back in old chairs, cheering with a cold brew or a smoking something in their hand.

The Range makes this place feel even more like a festival. If you’ve been to Glastonbury and have spent any time in the Peace Fields, then you’ll definitely notice some similarities.

What strikes me as the best part of this music and arts hub is that nobody judges you.

Everyone’s there to have a good time. Plus, if you have the guts to get up and speak your mind, play your songs, or dance your moves, then the residents of Slab City will show you respect and encourage you to entertain them more.

The Range is run by long-time Slab City liver ‘Builder Bill’, though his real name is William Ammon. Together with his wife, Robin, they put on high-school proms. We’re talking the type that have been popularised by various Netflix shows, but for the residents of the city.

Complete with old dresses, they give people who never graduated the chance to attend prom and find out what all the fuss is about…and get drunk at the same time.

It might shock you to know that this place actually has a library! Of course, if people from all over the US and the World congregate on one patch of desert, then they’re bound to bring books, DVDs, games, and CDs with them.

The library is an entertainment hub for all. It’s run by one of the city’s founders and provides a place for people staying in the Slab City hostel to pick up some new reading material for their stay.

That’ right – there’s a hostel too!

Off grid living isn’t for everyone. But for those that have mastered the art of living an alternative lifestyle, it becomes a piece of cake.

Slab City has a river flowing through it where residents go to shower. The local hostel has access to the internet too, so people can go to check emails or update the City’s Facebook page if they’re having a dull day.

One thing that you have to understand is that this is one of the only places in the world that promotes ‘free-living’. Anyone can rock up, grab some empty cans, and mark out their territory. That’s all it takes to claim your own piece of Slab City. You don’t have to pay any bills or fees to anyone.

Some of the prime spots are taken up by long term residents. When they leave or if they die, their plots are passed on to friends or loved ones. You can’t just buy a stellar piece of real estate here; it has to be gifted to you.

What Kind Of People Live Here?

I know you’re probably thinking that everyone who lives in Slab City is a hippie or down on their luck. But that’s not the case.

It’s true that some people have been forced to live in Slab City due to poverty or to evade justice. Some of the residents, however, are retired lawyers and business people. They’ve ditched their suit and ties in exchange for a life of freedom with no limits.

Good on them, I say!

As I said, Slab City is a complete melting pot of ideas, beliefs, and professions. I read one story about a European vet who moved here and now looks after all of the animals in the community.

Rather than having different social classes depending on your wealth or birth, everyone here is equal. Money doesn’t make the world go round in Slab City. People rely on favours, coupons, sharing, swapping, and offering.

Being friendly is far more valuable than how many notes you have in your wallet!

If you put a lot of people together in a lawless, uncontrolled piece of land, adding drink and drugs into the equation, then there’s going to be some crime.

Every winter, thousand of snowbird travellers make their way here. Some know that they won’t ever be coming back again and don’t think twice about raiding a van while drunk.

I’ve been to plenty of festivals in my lifetime, and I’ve always left things in my tent without any worries. It’s the same in Slab City; there’s good and bad in everyone and everywhere, and sometimes things are going to go sour.

To say that Slab City might be lawless in the sense that it doesn’t have a police department is one thing, but there are rules to follow.

If you break the rules set out by what I like to think of as the ‘City Elders‘, then you can be banished from this free, off-grid community forever. Up until recently, they would torch your camper and chase you out with nothing to your name.

I wouldn’t want to get on the wrong side of the Elders!

Past lives don’t matter here. It doesn’t matter if you were a crossing guard or a murderous gangster in your; all things are forgiven at Slab City. Play by the rules and your can-lined land is yours.

Any Other Interesting Slab City Facts?

Amazon delivers parcels to Slab City! I don’t know how you tell the delivery person which place is yours, however…

Maybe that would work?

Honestly, Slab City intrigues me a lot. I imagine it’s the kind of place where you could spend everyday speaking to someone new and learn more about the world than you could ever do at school.

As someone who has been living an alternative lifestyle for three years now, I like the concept of a generous, welcoming community where everyone looks out for each other.

Slab City reminds me a little of a squatter community I came across in Slovenia. The people there were artists, and many were on drugs, but that didn’t make them bad people. They were chilled, friendly, and just living life on their own terms.

Would I consider living in Slab City full time? I reckon the heat would get to me during the summer, but it would be interesting to experience the electric festival atmosphere that flies in with the snowbirds during the winter months.

Hopefully, we’ll be able to do a Van Clan tour of this mysterious place for you someday soon! Maybe we’ll even see you there!