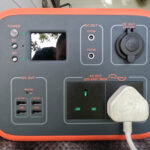 We’re always on the lookout for new and exciting products to help digital nomads on the road, and the Poweroak Bluetti AC50 has most definitely caught our eye.

In an age where people are throwing caution to the wind, stepping out of their office-shaped comfort zones and plying their trade off grid or on the move, portable power is everything.

Whether you’re a writer on the road (sounds familiar) or enjoy amateur videography while out on a camping trip, having somewhere to charge your devices is essential.

Not only that, but you need to make sure you’re using pure sine technology to keep all of your expensive devices safe while charging. 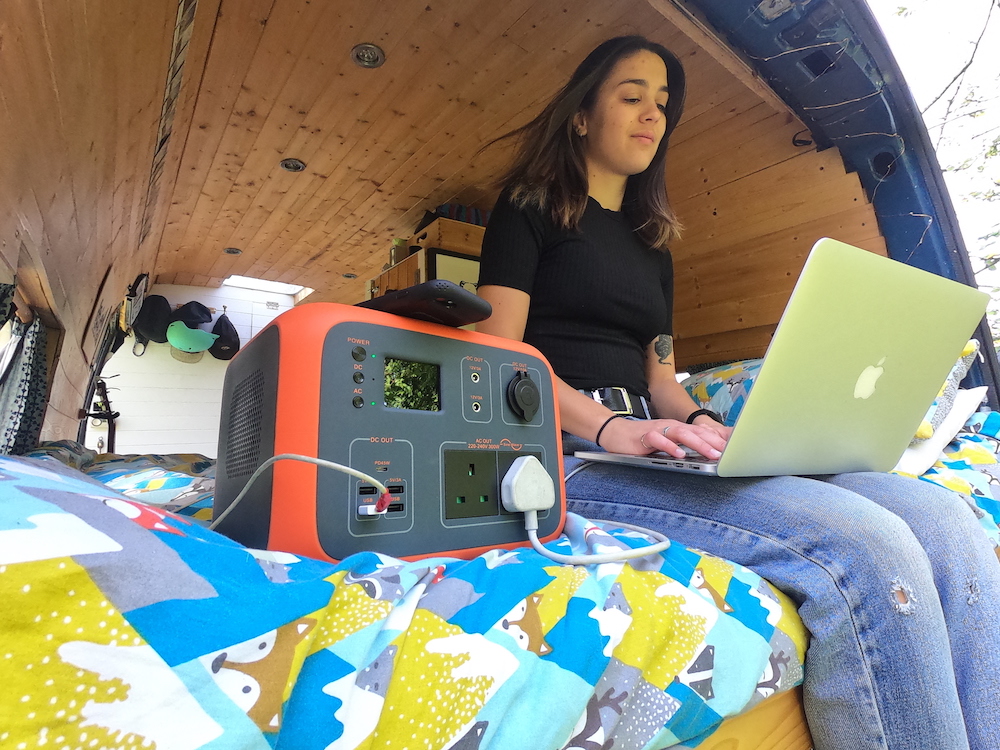 The Poweroak Bluetti AC50 is a smart piece of kit with more charging ports than you can shake a stick at.

It’s bright, it’s easy to use, and it has a torch on the back with an in-built S.O.S function.

Now our boss Alex will know the exact location to send the pizzas to the next time I’m hungry on the road!

Checking Out The Poweroak Bluetti AC50

The Poweroak Bluetti AC50 is a portable charging block that you can keep in your camper, giving your the power of lithium energy whenever you need it.

It’s a solid product with lots of amazing features, all of which we’re going to get onto in due course.

The product itself comes packaged very nicely with just the right amount of protection without going overboard.

You get a wall-mains charger, a 12V DC, and a solar panel charger included, all of which plug into an easy-to-use port on the back of the unit.

What’s more, it also comes with a carry bag so you can keep it dust free and safe from scratches.

If you like to live life on the wild side, however, you can just use the flip-up carry handles which feel sturdy and secure.

Just don’t swing it around or you might knock someones head off!

How Many Charging Ports Does It Have?

The Poweroak Bluetti AC50 has multiple charging ports for you and your friends or family to power up multiple devices at once. 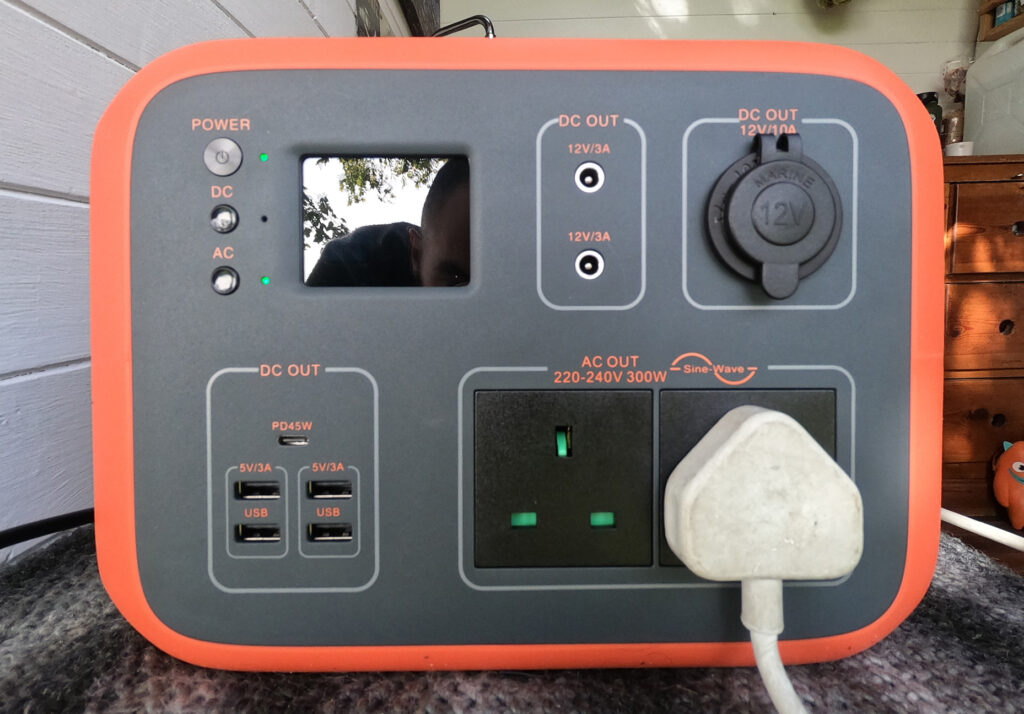 Obviously, the more devices you charge at the same time, the quicker the power will go down.

But you already knew that, so I’ll move on!

The power pack has four USB charging ports for all of your phones, tablets, e-readers, action cameras, and more.

There’s also a USB-C fast-charging port for anyone with a swanky iPhone or Android phone (I’m still on the old lightning connector with my trusty iPhone 7 Plus).

There are two round-pin DC outs for tyre-pumps or lights, and a 12V marine socket for any boating enthusiasts out there who want to power a portable vacuum or a cooler for keeping drinks chilled.

And, if you have any devices that are compatible with wireless charging pads, then you can just stick them on top of the Poweroak Bluetti AC50 and let it do the rest!

What Products Can I Use With It?

When it comes to AC Power, the built-in pure sine inverter can provide you with up to 300W of power.

This will be enough for most laptops, drone chargers, and other low power apparatus that you might need while out on the road.

It can certainly power a sleep apnea machine; now you don’t have to keep the other campers awake due to your snoring all night.

The Poweroak Bluetti AC50 won’t be able to power bigger power tools or a hairdryer through these sockets, but it can power a TV with low-wattage, tyre pumps, fans, fridegs, and much more. 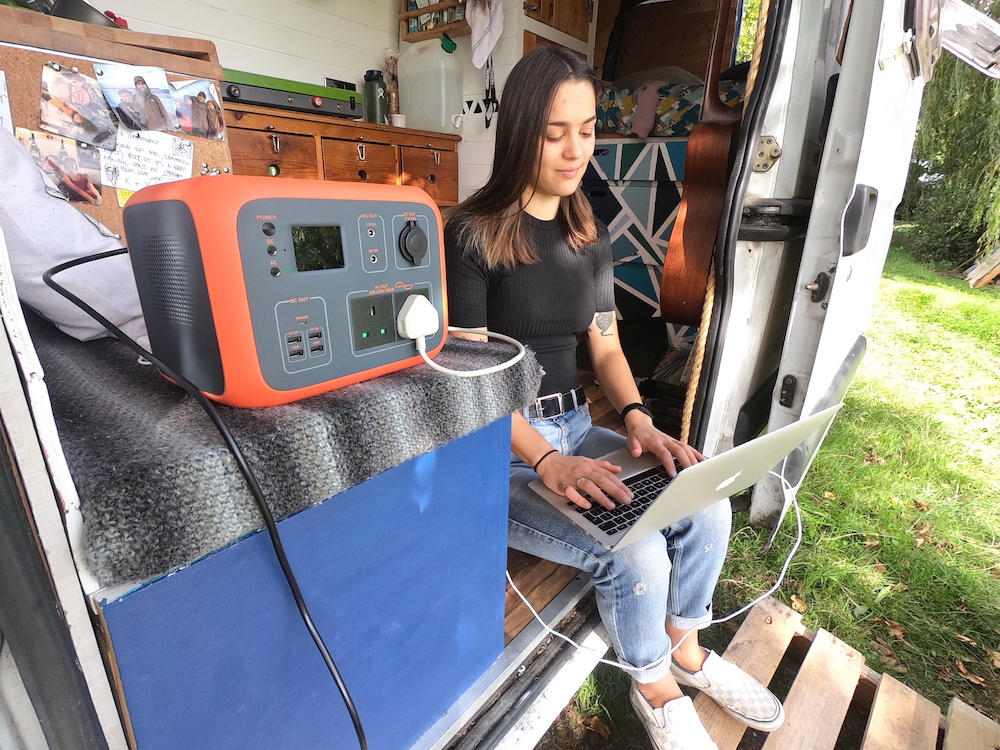 We’ve been testing the Poweroak Bluetti AC50 out for a week or so now, mostly charging up phones, laptops, and our GoPro.

The battery pack has coped very well with what we’ve thrown at it, and we’ve been keeping track of how much charge is left on the dedicated battery percentage icon on the LED screen.

The battery is split into 20% segments, so you know when it’s nearing recharge time.

There are also readings for how much energy you are drawing too, keeping you informed of how power hungry your devices are and if you’re potentially using something that could drain the battery too fast.

… not that many of you reading this will find yourself in a survival situation, but I guess you never know!

How Do I Charge It? 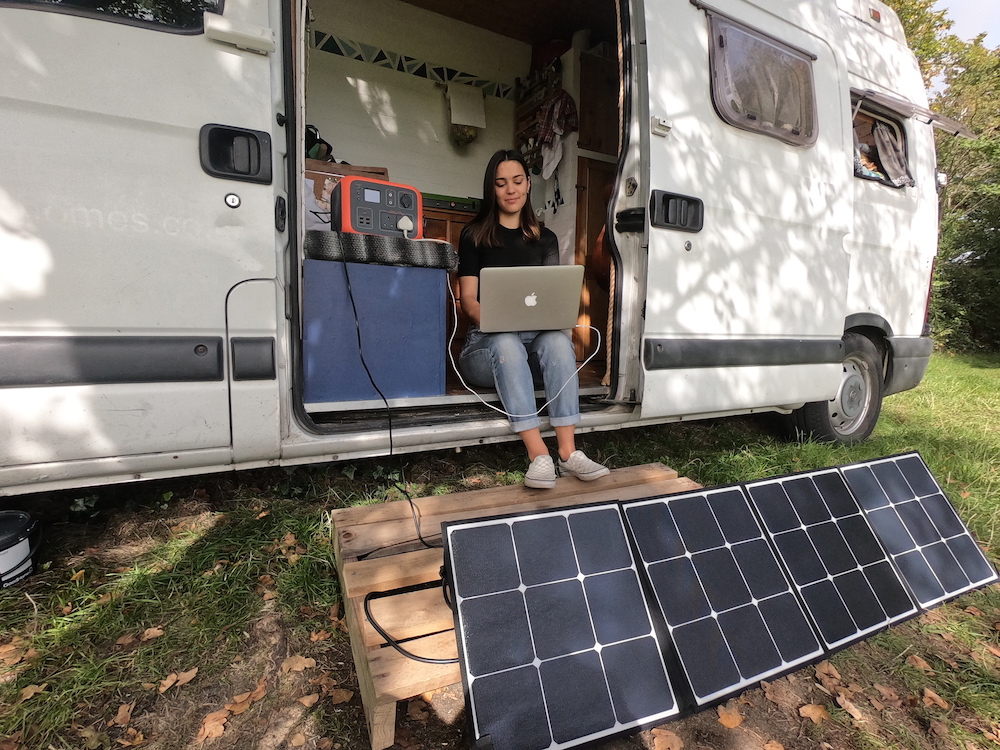 The Poweroak Bluetti AC50 can be charged up three ways –

You get all of the necessary cables to be able to charge up the unit using the three methods above, but the best solutions are by far the mains-wall charger of using a solar panel (sold separately).

The car charger is great if you need a boost on a long journey, but it can only fill the powerpack up to around 40/50%, so it’s not an ideal solution for long-term usage.

The wall charging cable will fill your Poweroak Bluetti AC50 up from empty to full in around 7-8 hours.

If you’re heading out on the road, then you could stick it on overnight and have it ready to go by the morning!

The best solution by far is to twin it with a solar panel and keep it topped up wherever you are.

The Poweroak SP120 folding solar panel in the picture above provides 120W of solar power and can be hung or stood in pretty much any position.

Look out for a dedicated article on the panel coming up soon!

Does The Poweroak Bluetti AC50 Have A Solar Controller?

The unit itself has a built-in solar controller, so you don’t need to worry about buying an extra unit to plug in. It’s efficient and maximises every ray from that free-energy factory we call the sun.

It can even be used as a solar generator! 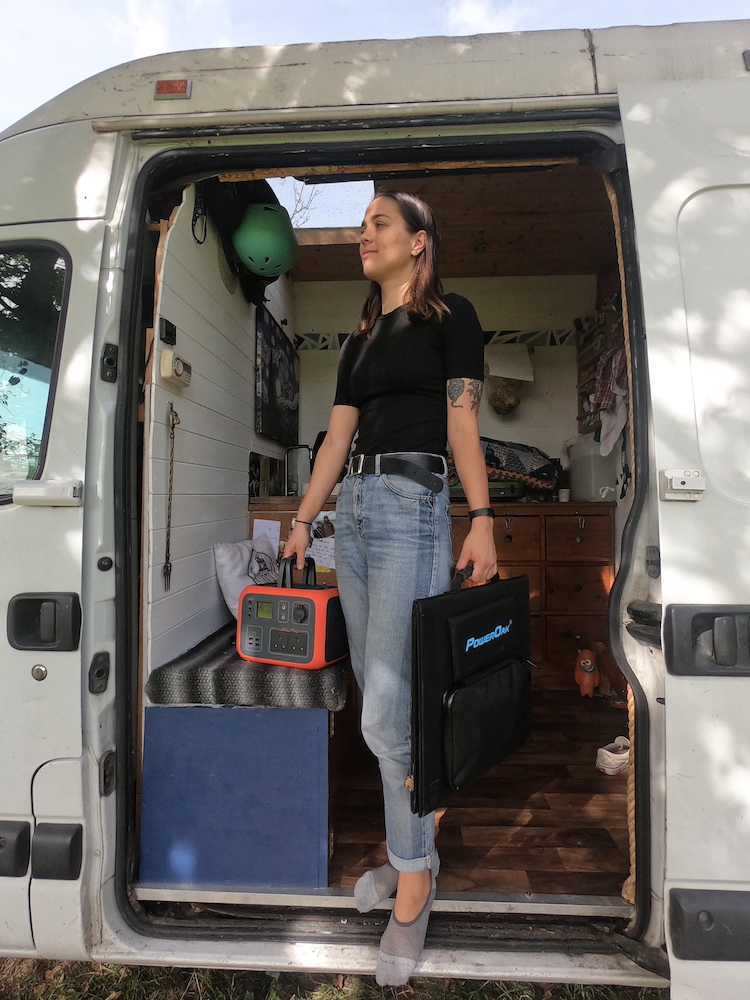 While the SP120 folding solar panel is pretty light, the AC50 isn’t the worlds lightest unit.

Sure, it won’t drain your van of petrol every time you drive or fall through the floor of your camper, but we don’t want to give you the impression that you could carry it with you on a long hike or stick it in a backpack.

We would suggest that this charging pack would be best suited in your car or camper and that you could lift it outside for lounging/working on the grass or sticking inside a tent.

What Kind Of Inbuilt Protection Does It Have?

This power pack is designed to keep both you and your devices from being fried to a crisp.

It comes pre-equipped with a battery management system (BMS) that keeps an eye on voltage control, temperature control and more advanced bits and bobs such as short circuit, over current, overcharge, etc.

What’s This About The Poweroak Bluetti AC50 Having A Torch? 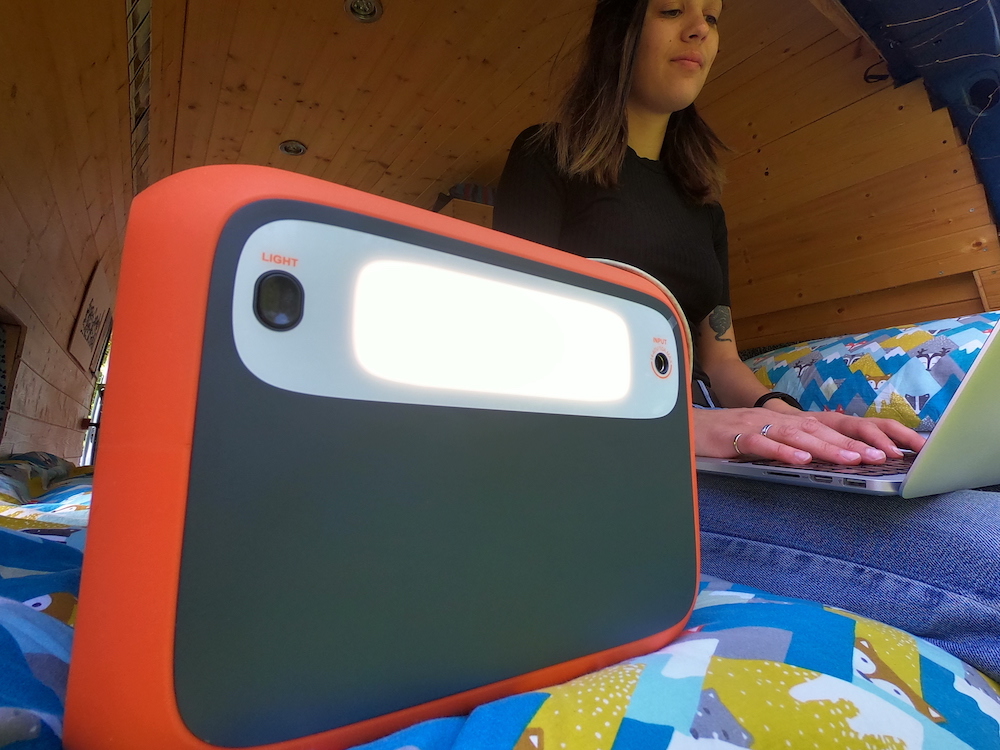 You can’t see it to it’s full potential on this picture as it’s the middle of the day, but the light on this thing is super powerful!

If you are travelling in a camper that doesn’t have 12V lighting or often opt for staying in a tent/roof tent, then the light on the Poweroak Bluetti AC50 will illuminate your space perfeclty.

It’s probably bright enough to blind an attacking bear too (but don’t try that. You’d be better off throwing the unit at it and running to safety).

There are three modes –

The Poweroak Bluetti AC50 is a great bit of kit that will keep you powered up on the go no matter where you are.

It’s simple to use, easy to charge, and great for keeping on top of how much electricity your using while on the go.

The size of the unit is also a bonus, but its cubic design does mean that it would be difficult to store in some spaces, taking up more room in a drawer than say the slimline Powerpack 450 from PPT.

I’m a big fan of the dual AC sockets on the front, however, giving me the option of charging my laptop while Rose powers a sander for her latest woodwork project.

Where Can I Purchase This Power Pack?

You can purchase the AC50 from Amazon.

Plus, Van Clan readers also get a special discount!

Poweroak Bluetti AC50 Power Pack Review £499.99/€589.99/$399.99 8.5 8.5/10 Pros Clear digital display Wireless charging function Two plug sockets Torch back panel for camping Cons Bulky size Not suitable for carrying long distances BUY HERE What adventure is complete without some fun on the water? While your van might not have space for a canoe […]