If you’re struggling to pick the best ice chest or drinks cooler for off-grid campervan travel, then I have three important words for you – Yeti hard coolers.

When it comes to purchasing a camper van or RV, we tend to stick to the names that we know and trust. Mercedes, Hymer, Airstream; these brands are instantly recognisable and ooze a certain quality that makes them loved the world over. Well, for those of you that don’t know, Yeti is the Mercedes of the camper cooler world, the BMW of Ice Chests, or any other car and coolbox combination that you can think of.

Ask anyone in the know what the industry standard cooler is, and they’ll answer Yeti hard coolers every time.

You just can’t beat their range and build quality, and I’ve used them on multiple road trips across America with zero issues.

Over the course of this article, we’re going to be taking a closer look at the Yeti hard Coolers range. By the very end, you’ll know everything there is to know about this iconic brand!

Getting To Grips With Yeti Coolers

I know some of you might be thinking that these products are made by the Abominable Snowman, but the story of the company’s birth is much more interesting and 100% human-led.

Yeti coolers was started by two brothers on a mission to create the ultimate cooler. They wanted something that could withstand everything from an impromptu house party to an adventure into the depths of the backcountry.

They started with a line of hard coolers, the very products that we’re going to be looking at in this article, and they have continued to go from strength to strength.

Today, Yeti hard coolers are made all over the world. Their Tundra range, which we will be covering in this article, are made in the USA with some manufacturing taking place in the Philippines.

Some of the soft-wall coolers and smaller, portable units are made in China too. What started as an idea shared between two brothers is now a global venture!

Behold the prized product of the Yeti hard coolers range, the Yeti Tundra. The name itself evokes a feeling of freezing temperatures right away, which is exactly what you want from an ice chest.

You wouldn’t have much confidence keeping your beers cold in the ‘Desert Scorcher’ now, would you?

The Yeti hard coolers range covers a vast range of sizes right from the ‘Roadie’ 20-quarts cooler through to the mammoth ‘Yeti 350’ 328-quarts ice chest.

Their size obviously determines how portable they are in terms of lugging them around on the trail, but each and every one of these products will fit in a standard campervan or truck camper perfectly.

Obviously, if you’re travelling around in a converted VW Caddy Camper, then don’t go for the biggest product on the market. Use your common sense and measure your space before buying. 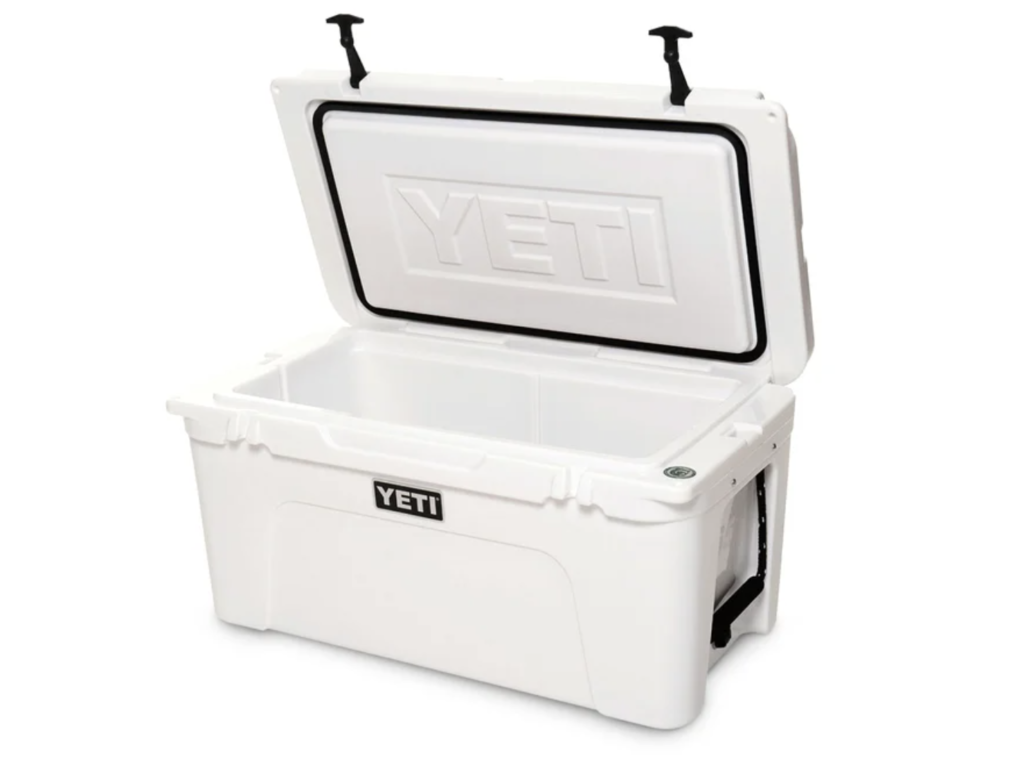 Every time I’ve headed out on the road in the States with Four Wheel Campers, we’ve always had the Yeti Tundra 65 on hand to keep our food cold and our beers chilled.

Even though those campers have fridges, there’s just something about having an ice chest that feels more authentic. They don’t need battery power to work, their ice retention stats are insanely impressive, and they can be pulled in and out of your camper so your chilled beers are right beside you whenever you park up for the night.

The Tundra 65 is the most sought after product in the Tundra hard coolers range and one that you’ve probably seen countless times on your Instagram feed.

Let’s take a look at what makes them so great and why they are loved by hundreds of thousands of campers across the globe! 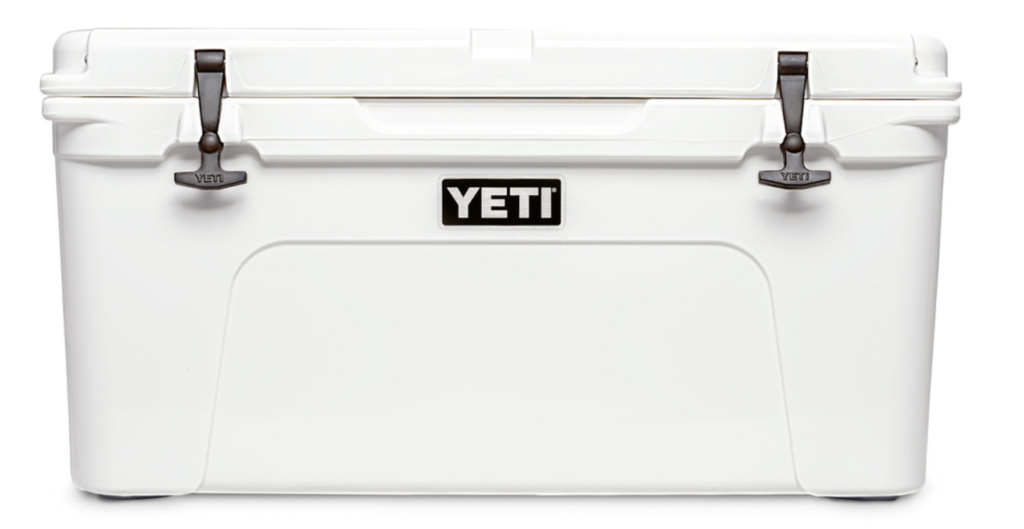 The Tundra range of Yeti hard coolers are for everyone from hunters and fishermen to camping enthusiasts and full time vanlifers. They provide a superior cooling experience for your favourite beverages and snacks.

Think of them as spas for chips, dips, drinks, and deserts.

Yeti Tundra coolers are made using a Rotomoulded design. They’re put together using a plastic casing that is moulded over an insulated core.

Rotomoulded coolers tend to be a little more expensive, but for good reason. They remove any chance of leakage through gaps or seams, and they’re much more durable.

Sounds like two things that a good cooler should incorporate, don’t you agree!

Add in Yeti’s permafrost injection technology (another cold sounding thing), and you’ve got the ultimate cooler in your hands.

Yeti hard coolers come with a 5-year-warranty. If that doesn’t prove that they’re confident in the durability of their products, then I don’t know what will?

Hold up; how about the fact that they’re certified as being bear-proof by IGBC?

…Yeah, that’ll do it alright!

Coolers are made to be chucked up into the back of vans and to contend with a variety of different surfaces. We’re talking gravel, rocks, sand, mud; basically anywhere you might park your RV.

The Tundra is hard as nails; it would have to withstand a bashing from a Grizzly. It often doubles up (unadvisably) as a seat for fishermen or a step for people trying to reach to the top of their camper.

It’s about as hardcore as they come.

I’ve mentioned that this camper is bear proof, and that’s largely down to the strong seal around the cooler and the T-rex latches that keep it closed tightly.

A strong. airtight seal is the key to stopping smells from sneaking out of your cooler that might attract Yogi and his pals. It also helps to keep the cold temperatures inside where they belong, but we’ll come onto that in a minute.

The T-Rex latches are super simple to use and double up as handles for lifting the lid up when you need to get in and out of the cooler. They’re strong too, so you don’t need to open them as if the cooler were a precious artefact every time you need to nip in for a pot of humous or rib-eye steak.

The Tundra range of Yeti hard Coolers come with slots to fit a dry rack (a way of keeping certain foods that might not have wrappers away from the ice below).

To be honest, that’s something that you’d expect from a cooler of this price, and it’s a nice touch for people who like to cook with fresh ingredients and make meals from scratch.

The last area of merit is the water drain. There’s not much to say about it other than water comes out of it nicely.

Like any cooler, you’ll need to help the last dregs of water out by tipping it on its side a little. Or, you could use your RV lifters to create an angled surface to help the water on its way!

That being said, it will fit in most camper conversions with no troubles and can easily be carried by one or two people depending on how heavy it is.

If you’re looking for something that you might be able to carry long distances that is still a decent size, then there is a new range of Yeti hard coolers on wheels!

The Yeti Tundra Haul has a handle and wheels just like a suitcase, except you keep ice and veggies in it instead of pants and socks.

That is unless you like your pants to be ice cold, of course.

The Tundra range of Yeti hard coolers are hard to beat when it comes to ice retention. Because of their rotomoulded design, they’re incredibly insulated and can keep your food fresher for longer.

In most temperatures, users will be able to keep their food fresh in temperatures of 4.4℃/40℉ for 5-6 days. That’s perfect for most camping trips and a perfect solution for long-term vanlifers who do a fresh produce shop once a week.

Could you be bothered with leaking water sloshing around your van or a dodgy seal that attracts bears to the side of your campsite?

I think we all know the answers to those questions.

Sure, you’re paying for the Yeti logo on the product. But unlike some car brands that have other logos slapped on top of them, this cooler is the real deal, and the logo is a sign of quality that many coolers could only dream of living up to.

It is amongst the crème de la crème of hard coolers, and you can pay less for a unit that will do the job. But if you’re looking for a simple option and a product that matches your thirst for adventure, then Yeti hard coolers tick all of the boxes.

Which Size Should I Purchase?

Bigger products cost more for starters, and the bigger capacity, the more ice you’ll need to fill them up. Equally, there’s no point trying to make do with a 20-quart cooler if you and four others are camping in the woods for 6 days.

In summary; don’t purchase a cooler that’s beyond your means, size of camper, or party size.

If you’re looking for something to take to the beach, then the Roadie (listed below) might be more your style.

If you’re planning an off-grid adventure with the whole family (5+) in a big RV, however, then the Tundra 125 would be a good choice, as long as your vehicle can take it!

Other Notable Styles In The Yeti Hard Coolers Range 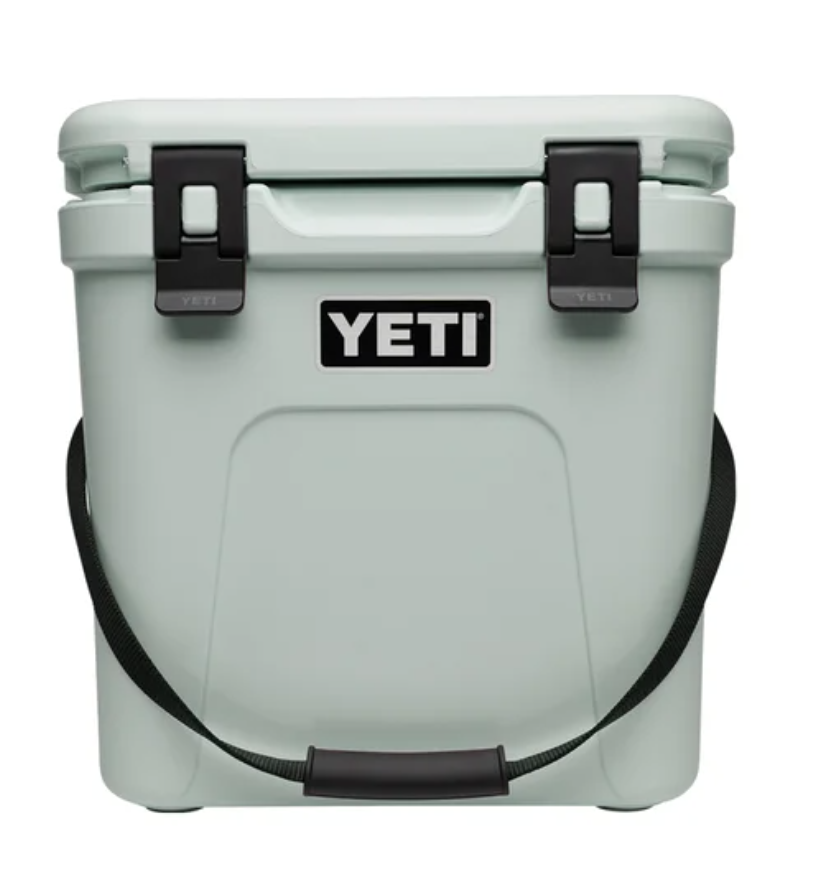 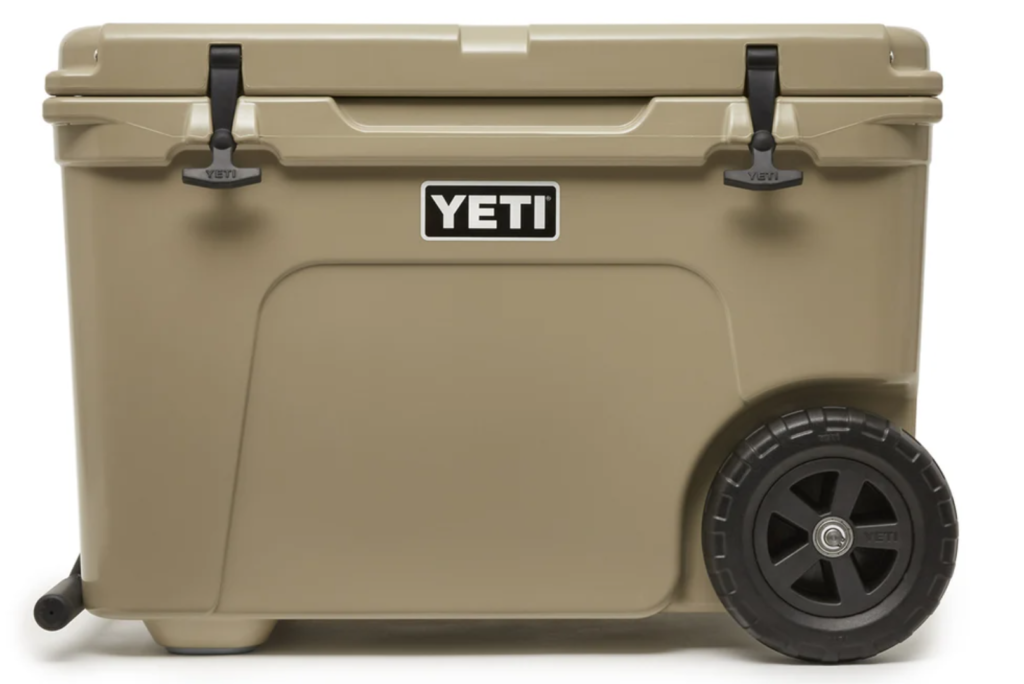 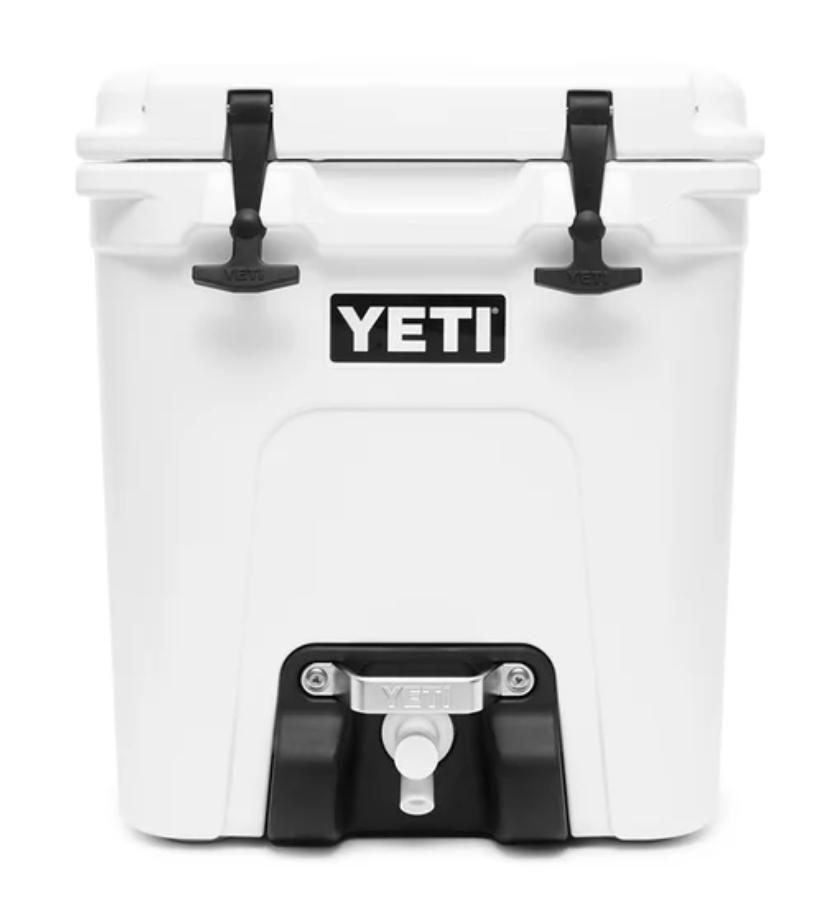 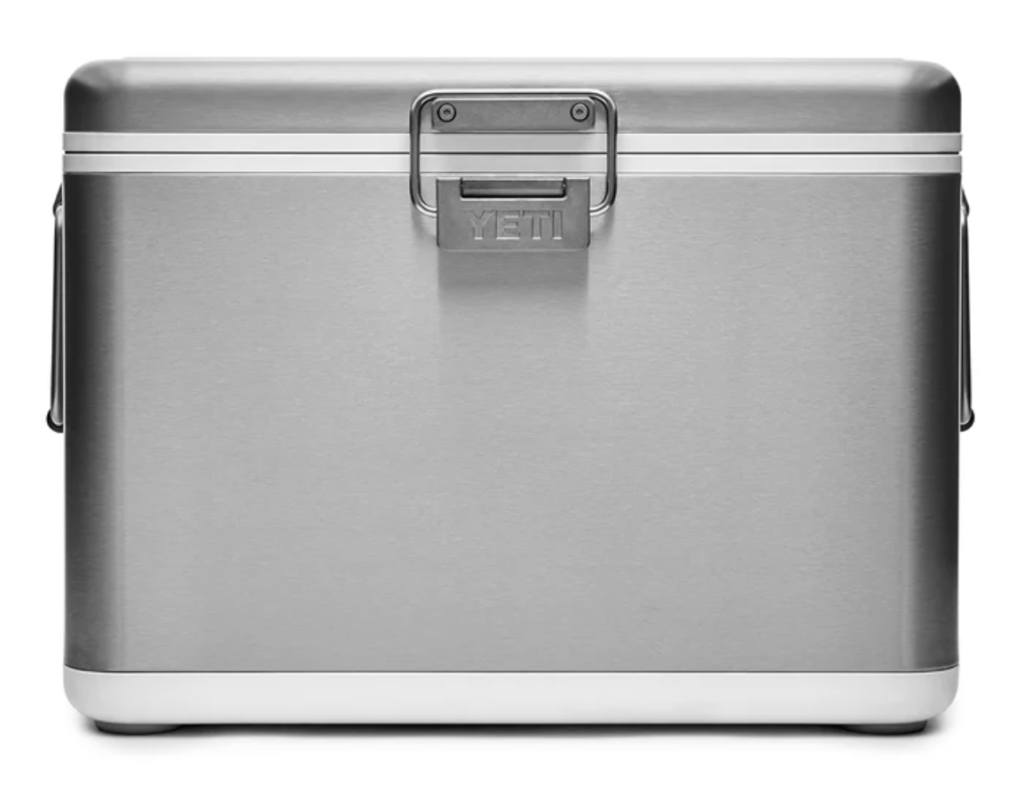 Yeti is up there amongst the biggest named brands in the camping and vanlife world. You’re paying for quality, durability, and a brand that you know you can trust right from the word go.

There is some strong competition out there such as the Orca range of hard coolers, boasting an extra day of ice retention than Yeti.

But does that really matter in the long run? I guess you’ll have to keep an eye out for our Yeti Vs Orca review coming up real soon.

I never have any worries about taking these coolers on the road with me. They’re perfect for every adventure and tough as nails – what more could you possibly want!