5 Coolers Like YETI But Cheaper – Find The Perfect Yeti Alternative 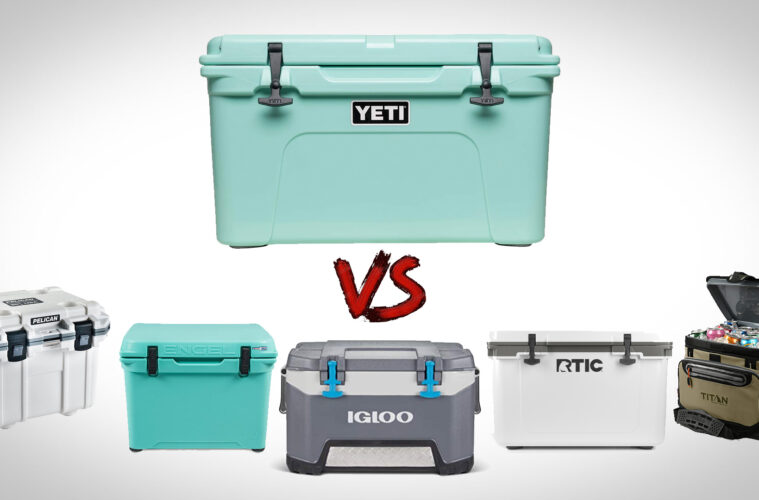 If you’re a regular vanlifer or camping enthusiast, then you’ll know that everyone wants coolers like YETI.

YETI hard coolers are, to use a technical term, the bee’s knees. But they’re also pretty damn expensive too, putting them out of the reach of many people who simply can’t afford to shell out $400 on an ice box.

Granted that the YETI range is more than just ‘an ice box’. With a rotomoulded design that keeps food colder longer and eradicates leaks, these coolers are tougher than Popeye after eating his spinach.

They’re also bear proof too, which is handy if you’re boondocking out in the backcountry.

But are there any coolers like YETI out there that are a little less threatening on your purse strings? Is there an icebox that won’t make your wallet scream like a falling orc in Lord of the Rings?

We’ve found five top alternatives to the kings of the camping cooler world for you to look at.

But first, let’s think about what makes a good cooler.

What Makes A Good Cooler?

If you’re looking for coolers like YETI that can hold their own with the big-dogs of the camping cooler world, then there are certain characteristics you need to watch out for.

A cooler isn’t just a box that holds ice in…

As I’ve said before, YETI use loads of words in their marketing that make me feel cold while writing about them, which is exactly the feeling that you want when you’re considering buying a coolbox.

The YETI cooler’s rotomoulded design means that there aren’t any joins or seams for water to drip out of, creating a better seal and helping to keep your food fresher for longer.

We’re talking keeping food fresh at temperatures of 4.4℃/40℉ inside the box for around 5-6 days.

If we want a lot of bang for our buck, then we need to be looking for coolers like YETI that have impressive ice retention stats and don’t ruin your food after day one of your trip.

If you like to move your food from your camper or RV to the fireside or don’t want to be lugging a big box around from the car to the tent, then you need a portable option.

Some of the biggest YETI coolers take two people to carry them.

They might be big on storage, but they are definitely harder to carry around.

The YETI Roadie 24 is a simple, one-person cool box great for keeping your own food seperate from everyone elses or just for a solo trip to the beach or forest.

The YETI Tundra Haul is also one of the first large coolers that I ever came across on wheels. It’s like a suitcase, but you keep meat and cheese in it instead of pants and socks.

A lot of the brands that profess to have coolers like YETI end up producing units that don’t have a decent lid or seal.

To keep your food colder for longer, you need a lid that is just as insulated as the rest of the product and one that isn’t going to break if you sit on it.

The seal needs to be tight so it doesn’t let any smells out either, which will also help with the next point that’s coming up.

(N.B – This is about a different seal than the ones a polar bear might eat. No animals were harmed in the writing of this article.)

In many ways, your cooler is only as good as your seal is, so don’t settle for a sub-standard product.

This isn’t essential if you’re planning on camping in the Cotswolds in England, or any other place in the world where the only bears you find are the ones that your kids bring to play with.

But in the US and Russia where bears roam around nabbing picnic baskets, having a cooler with an IGBC rating is important for both you and the bears safety.

So many bears are killed every year just because they were being inquisitive. A bear doesn’t know that a tube of toothpaste left in a car door isn’t edible; it smells different, and therefore they want to find out what it is.

If they’d do that for toothpaste, imagine what they would do if they could smell your sirloin steaks or veggie sausages?

The final thing to consider, and one of the main reasons why you’ve read through this article so far, is the cost.

We’re looking for coolers like YETI that aren’t as expensive, coolers that may not have as much of a ‘well-known’ brand logo on the front or on the lid but still have the same quality as the frosty giants themselves.

Here are 5 coolers like YETI that stand up in the court of cool, keeping your food cold for less.

If you’re looking for coolers like YETI, then the best place to start would be a company that have made it their sole ambition to beat YETI at their own game.

RTIC coolers look like YETI hard coolers, and their stats are equally as impressive, if not more so.

When they began production, the company’s slogan was, Half the price … Holds more ice.

If that isn’t a kick in the teeth, then I don’t know what is.

After a lawsuit with YETI, their new but still very clear message is, “Over Built – Not Over Priced.”

RTIC cater for a massive audience that want coolers like YETI but at half the price.

Their RTIC 52 Ultralight certainly is cheaper than the equivalent YETI alternative, coming in at a whopping $200 less.

It can hold ice for up to 10 days in ideal temperatures, beating the YETI Tundra series by around 4 days.

These injection-moulded coolers are 30% lighter than other rotomoulded products, bear-resistant and virtually indestructible, and they have an easy drain system that makes cleaning out your cooler super easy.

Meet another brand that have made a name in the camping world for creating coolers like YETI but at a fraction of the price.

Engel are what you might call the ‘old guard’ of the camping cooler world.

They’ve been around a heck of a lot longer than YETI; since the 90’s, in fact.

When YETI took off and became the go-to name in cooler technology and quality, Engel shouted out that ‘they were here first’, and people started to listen.

They’ve developed quite a loyal following in the adventure community, especially with people who like to spend a lot of time out on the water.

And why do campers the world over swear by products like the ENG50?

Engel boast that their coolers are 100% indestructible.

They’re also about 25% cheaper and come with a 10-year guarantee, but I reckon it’s the first point that people find the most important…

These IGBC certified rotomoulded coolers can hold ice for up to 10 days.

What’s more, Engel has 11 sizes to choose from, which almost matches the 12 available from YETI.

They are easy to carry and come in a range of colours to suit your individual tastes!

There’s a little known secret that YETI won’t ever tell you, and that’s the fact that the Pelican Elite series has better ice retention stats.

When you look at it on paper, both companies claim that their products will keep food fresh for around 6 days, but customers swear that Pelican has the upper hand….

… or the upper beak, in this case.

Look out for our Pelican vs YETI review coming soon to get the full lowdown.

If you’re looking for the toughest, most durable, Fort Knox-esque cooler made on US soil, then you’ll be all over the Pelican Elite series like Pelicans at a fish farm.

This cooler comes with a lifetime guarantee. Their slogan, “You break it, we replace it. Forever!” represents their legendary customer promise that has made them one of the most loved brands in America.

With 2-inches of insulation and a 360° degree freezer-grade gasket, you’re getting some serious ice retention for your buck.

Add in the super-secure over-moulded handle, the impenetrable locks, hasp, bottle opener, and self-draining cup holders, and you’ve got a set of coolers like YETI that are, dare I say it, possibly even better!

Next up on our list of coolers like YETI is a product that would go well with the new Project M from Four Wheel Campers.

That aluminium kickstrip instantly makes me think of American off-road vehicles, which can only mean that this cooler is durable, strong, and adventure-ready.

The Igloo BMX 52 cooler is one of the strongest products out there. It’s made using heavy-duty blow-moulded construction methods and boasts a reinforced base.

You could probably defend yourself with this in a fight!

Igloo also know their stuff when it comes to UV inhibitor technology. The BMX 52 is protected against sun damage which will inevitably prolong its life.

If you’re using this cooler on hot sand or rocks, the ‘cool riser technology’ keeps heat away from the freezer chamber to minimise any melting too.

That’s how many people have bought and positively reviewed this icebox, making it one of the best selling camping coolers on the internet!

If you’re looking for portable coolers like YETI, namely the YETI Hopper shoulder-carry range, then the Arctic Zone Titan cooler could be the one for you.

At just $39.99, it’s around a quarter of the price of the YETI alternative and has some pretty amazing stats to boot.

For starters, the Titan has an ice retention figure of 3 days, which is impressive for a shoulder-carry cooler.

YETI doesn’t publish an ice retention figure for the Hopper range, which makes it hard to make a straight comparison.

And when I have no information available, I usually go for the product that confidently tells me what I need to know.

The Titan has a smart shell to keep soft goods like fruit and sandwiches away from any cans or bottles that you might be carrying.

It has pockets for cutlery and other belongings, and can also be used as one big ice crate to keep bulky items cold, or perhaps your severed thumb if you’ve been careless while cooking.

The Rhino-tech material on the outside is durable and stain-resistant too, keeping your product looking as fresh as your food for years to come.

Some of you will read this article and still buy YETI products anyway.

And why shouldn’t you! They are a great, solid make that have more than proven their worth in the van life and camping world.

But we hope that we have shown you that there are coolers like YETI out there for a fraction of the price that are just as reliable, even if they don’t have the same ‘brand-factor’.

If I was spending my money on a cooler, I think I’d have to go for the RTIC range of ice chests.

They’re basically YETI products with a different badge, kind of like when you buy knock of Mars bars from the supermarket that are called something like ‘Jupiter’ bars.

It’s the same filling, just with a different packet and half the price.

Which ice chest would you pick? Would you go for a cooler like YETI or for the real deal?