Sprinter VS Transit – Which Is The Best Van To Convert?

The age-old argument of Sprinter Vs Transit is one that van enthusiasts have had for decades and will continue to divide campervan lovers and conversion experts for many years to come. Both vehicles are well suited to living off the grid, and both vehicles have great potential when it comes to building your own tiny trundling home.

So what is it about these two vans that make people so incredibly ‘for’ one and ‘against’ the other?

In today’s world of alternative living, the Sprinter VS Transit argument is considered to be as important as ‘Lennon VS McCartney’, ‘Zeppelin VS Sabbath’, ‘Ketchup VS Mayo’ (if you answered; Lennon, Zeppelin, Ketchup, then you may continue reading this article).

If you’re planning on living the van life or travelling for long periods of time, then your vehicle is your home, and your home is your vehicle. You need to feel as comfortable in your bed as you do in the driver’s seat, and your rolling home needs to be up to the challenges that you might put it through while out on an off-road adventure 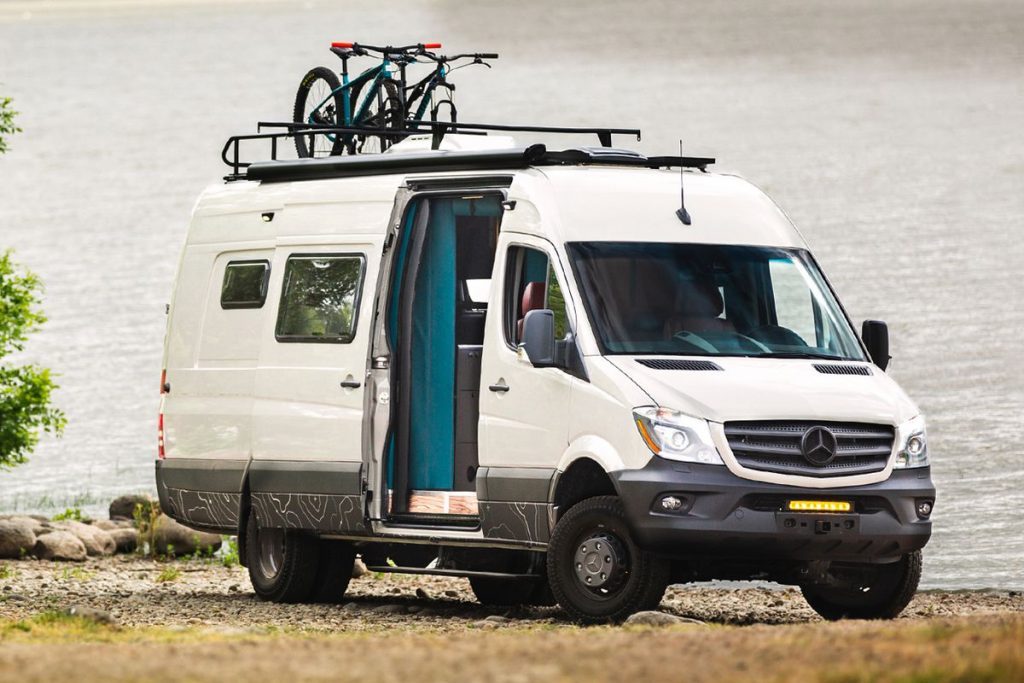 It’s no secret that Mercedes Sprinter Conversions are some of the most coveted camper conversions on the market. Many people assume that because they’re the biggest name, it also means that they’re the best.

It’s easy to sport the Mercedes Benz logo a mile away (that’s what good marketing can do for you), and while companies like Winnebago might use them for their conversions and remove the badge and make, it’s not hard to spot the distinctive design of a Sprinter Camper Van in a crowd. 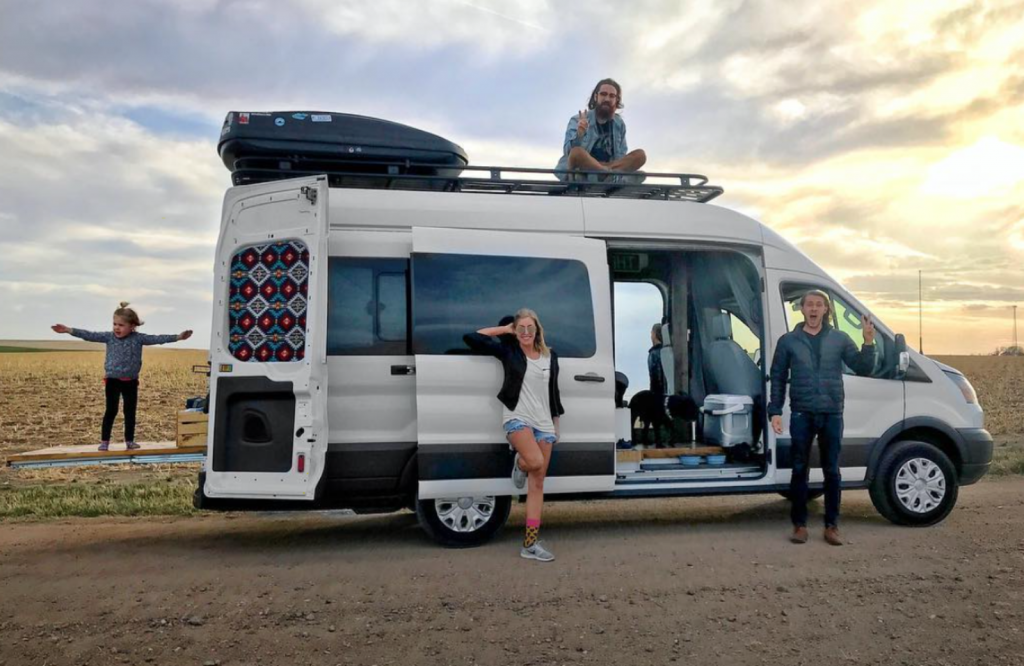 Having said all of that, we have a list a mile long of the best Ford Campers on our favourite Instagram accounts. They look homely once converted, can handle hundreds-of-thousands of miles, and are just as much of a household name as Mercedes.

We’ve noticed more and more companies such as Outside Van and Benchmark Vehicles turning to the Transit for their off-grid home conversions recently, and I wouldn’t think twice about purchasing one for myself.

We’re going to do our best to give you a rundown of both vans, talking about their pros, cons, ups, downs, and the general perception given by the van life community. Don’t worry; my head hurts too, but we’ll get through this together (one way or another). Prepare for the battle of a lifetime – let Sprinter VS Transit commence!

Should I Buy A Mercedes Sprinter?

Go to any campervan festival or conversion rally, and you’ll see Mercedes Sprinters everywhere. They’re considered the crème de la crème of campervan base-vehicles, and with three different sizes to choose from, they are the perfect choice for anyone considering full time van life.

Apart from being known for their impeccable build quality and legendary lifespan (some Sprinters have been known to still be running at 600K+ miles!) the Sprinter looks the business. It’s sleek, it’s powerful, and budding YouTube travellers know that it will bring home the bacon once their mean machine is up on the web.

Mercedes Benz are a global brand, and no matter where you go around the world, you’re bound to find a dealership or someone who has an uncle or a cousin who used to work for the company and can help you with your repairs. 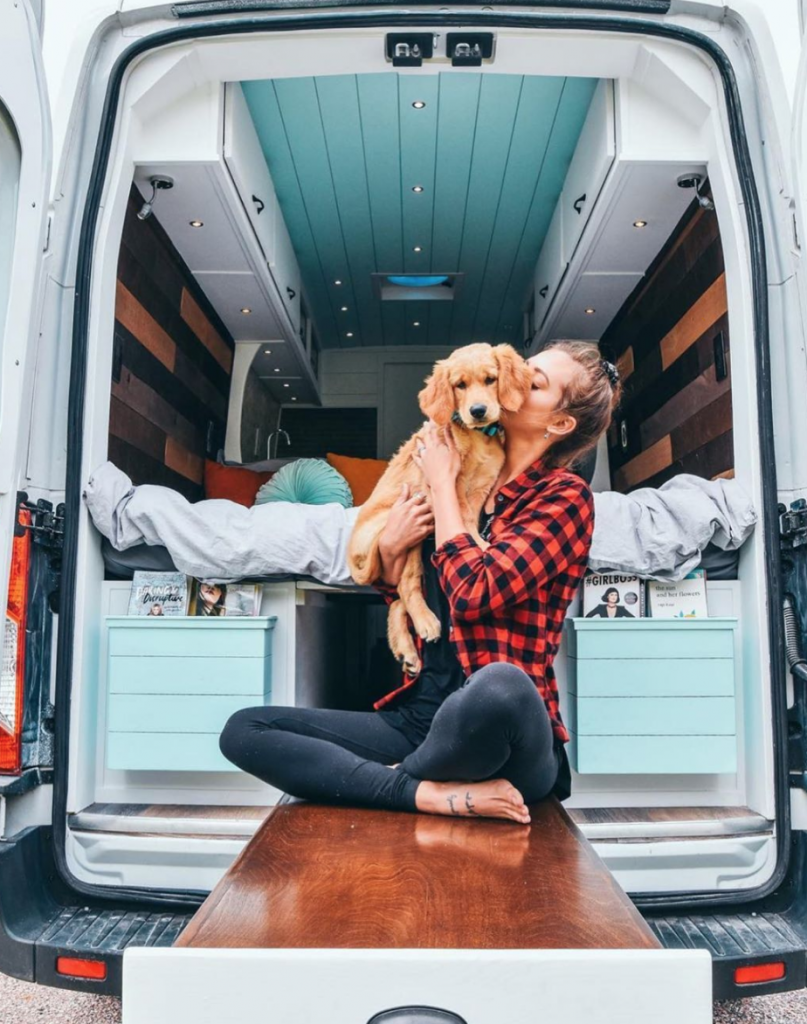 The Sprinter series has a lot of official and aftermarket parts that you can use to soup up your tiny house into a 4×4 monster. Some of the best overland vehicles going (think Storyteller Overland, Van Do It) use Sprinters, and once the snorkel, off-road tyres, suspension lift, bumpers, and roof rack have been added, a common-old-garden delivery van can suddenly become an earth conqueror!

Is A Sprinter Better Than a Transit?

The Sprinter has the upper hand when it comes to storage in the cab areas. When you’re on long drives, it’s nice to have somewhere to store all of the van life essentials that you need for life on the road. Maybe your partner likes to read so they don’t distract you, or perhaps you have kids on board that need pacifying before they explode. The Sprinter cab is basically an extension of your travelling home and has lots of practical features that complement full-time off-grid living. 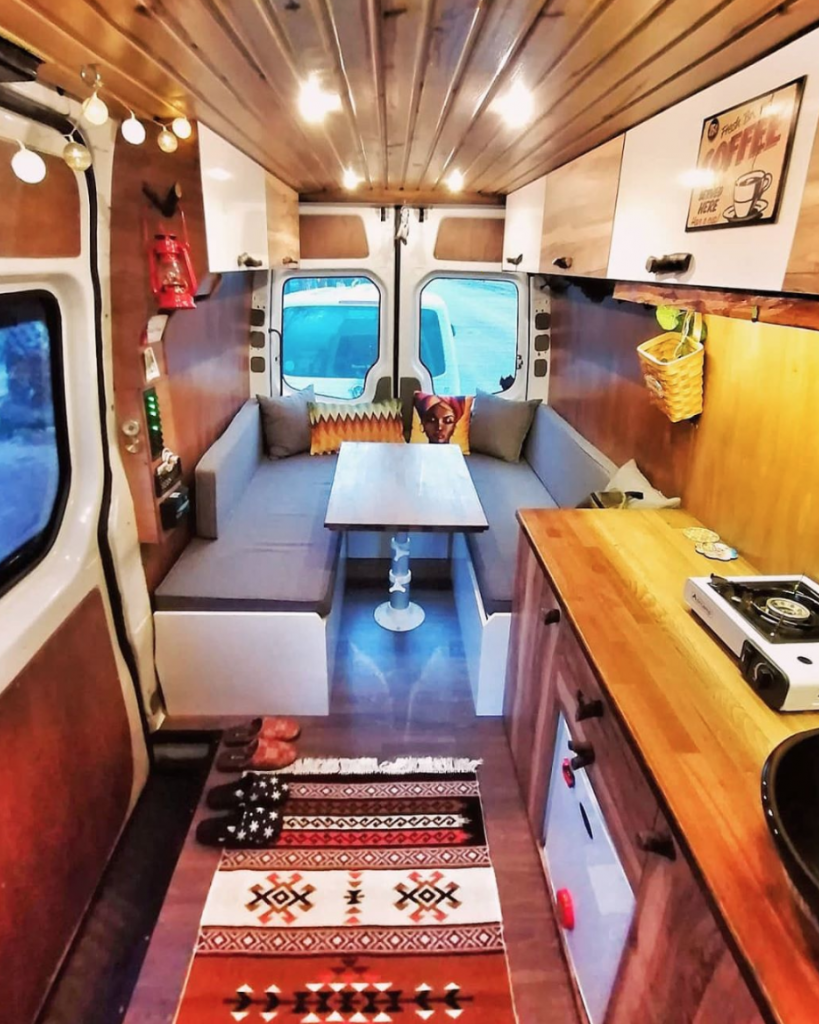 When it comes to fuel consumption, both vans are evenly matched. You’ll get around 38mpg out of both vehicles, depending on how much stuff you have crammed into your build. The curved shape of the Sprinter makes it a little harder to construct a cladded wall, but there are many inventive ways that you can use to overcome this problem.

In terms of how malleable the Sprinter is when it comes to taking out side panels and cutting holes in your roof, it’s a sturdy ‘blank canvas’ that you can get really creative with. Repairs tend to be pretty expensive (pricey van, pricey parts), and you definitely pay more for having that brand logo on your adventure bus.

The side door closes quietly and doesn’t need much maintenance in terms of the side runner. They also use ‘slam lock’ technology; it might give you peace of mind to know you’ve locked your home, but make sure you don’t leave your keys inside!

Should I Buy A Ford Transit?

Now it’s time to look at the second offering in our ‘Sprinter VS Transit’ article. Ford Transit Campervan conversions have always been popular with both long-term vanlifers and the ‘day van’ market, people who just want something that they can use for trips out on the weekend.

It’s the perfect choice for someone who wants a low-profile vehicle or doesn’t want to spend the earth on a Sprinter. They’re usually cheaper to buy, with second-hand car sites and dealer car parks often being flooded with old delivery or service vans looking for a new home. 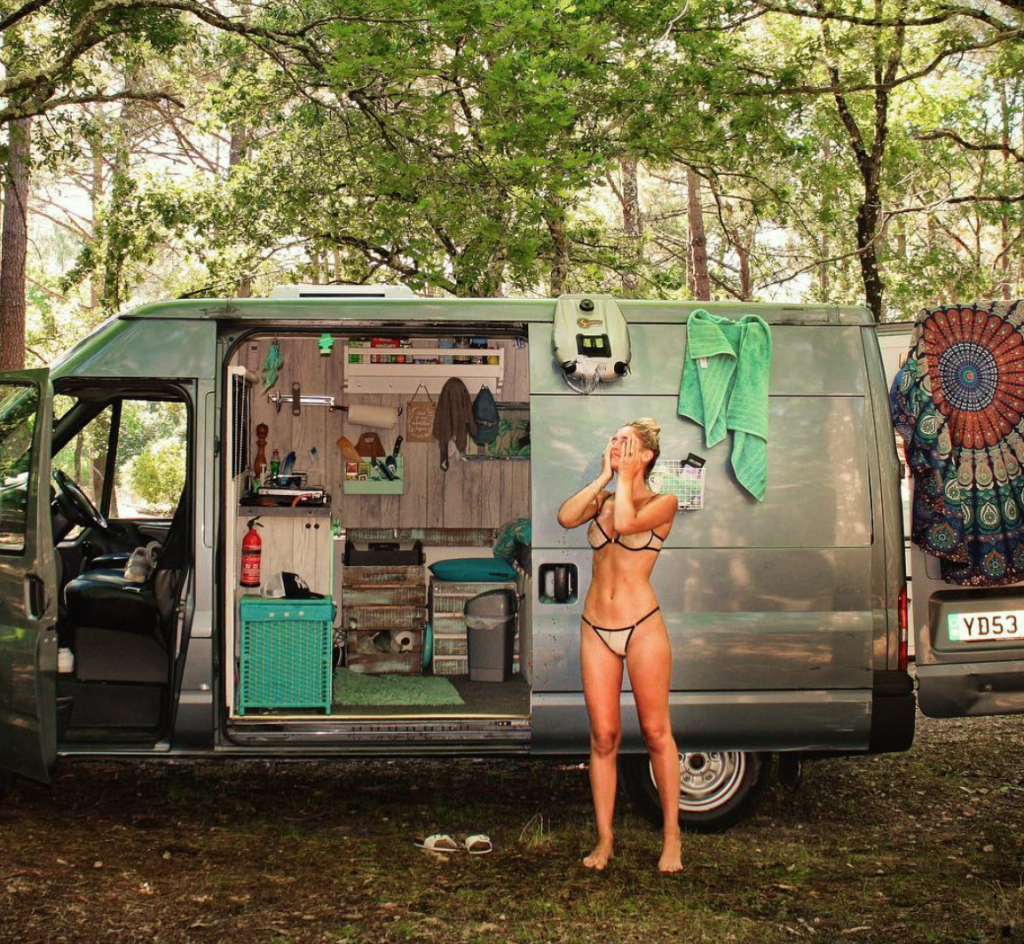 Transit vans are workhorses. They’re used by everyone from letter carriers to military drivers. A bit like the brilliant Fiat Panda 4×4, they’re known for their ability to keep going even when the mechanic’s verdict is bleak.

The space inside the back makes for quick and affordable conversions (cladding or wooden boards are simple to put up in the square shape), and the smaller size of the MWB options provide a vehicle that can fit underneath most pesky European height barriers with ease.

The Transit is newer to the US market, so it’s less easy to find older parts that might fit your vehicle if any problems arise. But when you do find parts, you’ll be surprised at how insanely cheap they are compared to the Sprinter, and there are a lot more aftermarket ‘third-party’ made options out there that you can use too (always buy from reputable sellers). 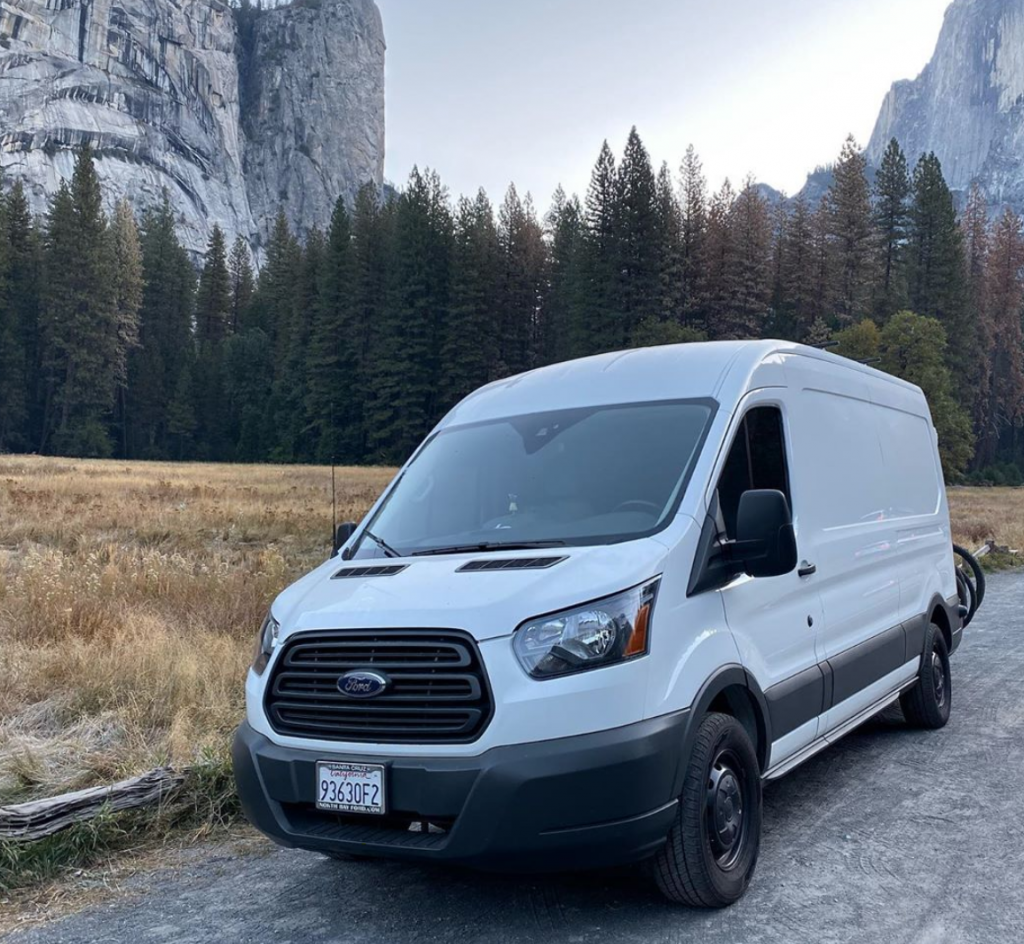 Is A Transit Better Than A Sprinter?

No matter what people might tell you, a Transit will always beat a Sprinter for drivability, hands down. The cab feels more like a car, so if you’re used to driving smaller vehicles and don’t want to feel out of your depth while trundling around the world, then a Transit could be the choice for you.

It deals with bumps and potholes better than the Sprinter (unless you’ve had an off road package installed of course), and the car-like steering and handling makes it a better choice if you like to take corners like they do in the movies.

Parts are also a lot cheaper, so if you’re going on a long adventure and want to take spares with you, then you won’t have to take out a loan or sell your organs to get stocked up with gear for repairs on the move. The interior shell is perfectly set out for screwing wood straight into the metal beams, and you won’t have any problems with cladding or cutting into your roof area.

The shape lends itself to fixed or rock ‘n’ roll beds depending on how much storage you have, and there will be no problems adding exterior accessories such as roof racks or light bars to the vehicle. If you like to stand up in your camper, then you’ll need a high roof, which limits you to the LWB and E-LWB options. 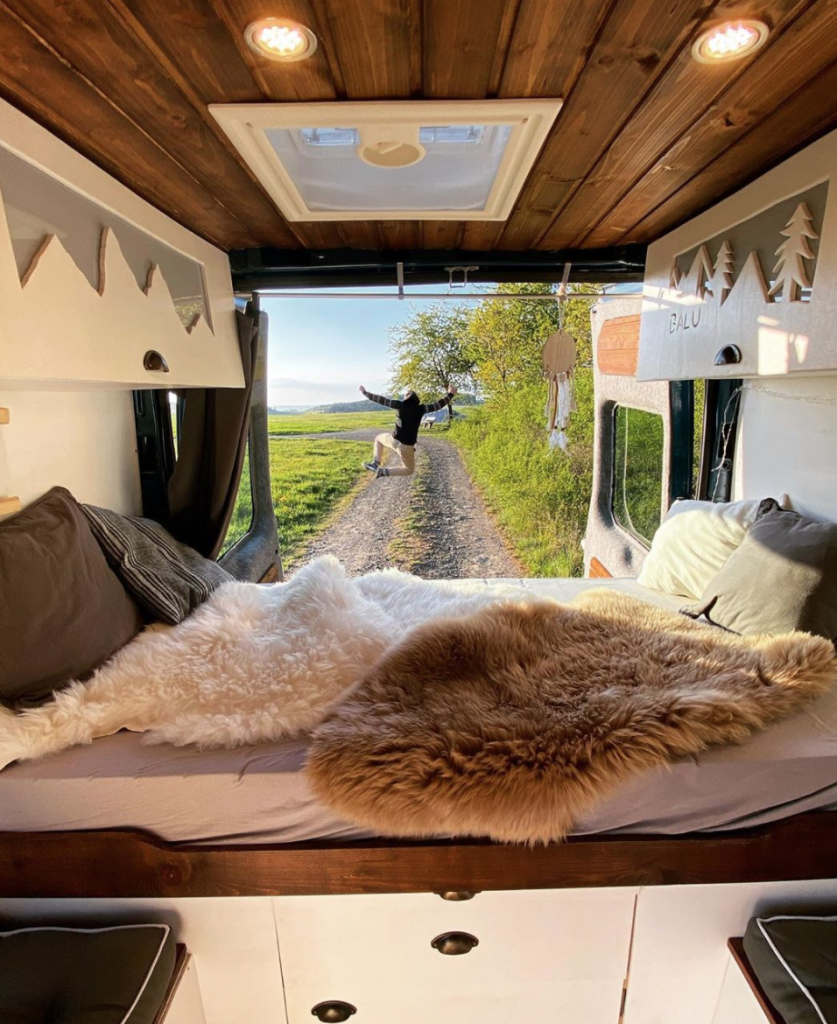 It’s a tough battle and an extremely close one to call, but here is our official verdict.

Of course (and now I’m really going to throw a spanner into the works) there are lots of other brands out there that you can look into, especially here in the UK. My Vauxhall Movano only cost me £3,000 because it’s not as ‘desirable’ a make, but who cares what the logo on the outside looks like once you’re inside and tucked up in bed.

Price is undoubtedly the biggest factor in choosing the right van, and while Mercedes may have come out on top in our Sprinter VS Transit battle, they will remain out of reach for many people who don’t have a massive budget to blow. I’ve seen a couple convert a Transit for £900 just by being thrifty and making things themselves, and the end result looked very nice! 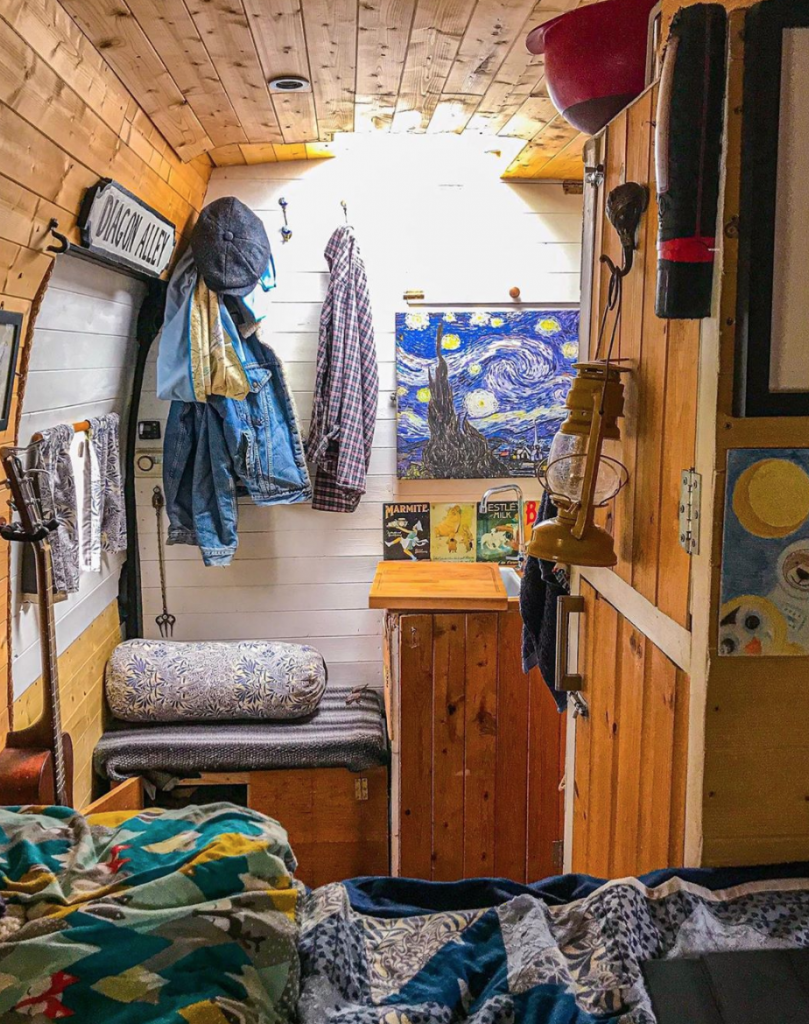 Vans are as personal as the clothes that you wear or your taste in food (and people) and you really need to connect with the vehicle that you choose. A Sprinter might make most sense in terms of space, but you might easily fall for a VW Crafter or an IVECO Daily and become comfortable ‘working with what you’ve got’. It’s a bit like Olivanders in Harry Potter – the van chooses the wizard (or is it the wand…you know what I mean), and you’ll know when the right one crops up.

If you agree, disagree, need more information, or are still as confused as when you started reading this article, then join the Sprinter VS Transit discussion over on our Facebook, Twitter, and Instagram pages!