Were here at the Overland Expo West, sponsored by the mighty Four Wheel Campers, and we’ve had the chance to check out so many amazing vans and overlanders. But sometimes, the best way to go is a custom build. If you’re looking at a modified campervan, then this article will be right up your street. SYNC Vans in custom campervan conversions, and Sprinter lovers who spend every day dreaming about the Sprinter Van life will be happy to know that they work on Mercedes Sprinter conversions and other vans too. In fact, they will pretty much convert any van for you. SYNC Vans work on a one-on-one basis so whatever your needs, specification, and budget, they can create an awesome tiny home for you.

This article is sponsored by Four Wheel Campers. They were kind enough to invite us to Overland Expo which gave us the chance to produce this article for the Van Clan community. Check them out if you’re interested in the best pop up truck campers around.

There are so many reasons that a custom camper conversion is such a great way to start van life travel. Perhaps the best reason is that you can get exactly what you want in your tiny house. If you can dream it, you can find someone to build it. Your own van life essentials and van life ideas are probably going to be completely different from the next persons! Some people can’t live without a shower, others think one would be a complete waste of space in a van. Some people need space to store surfboards or climbing gear, while others need space to work. Some people are travelling in a van alone while others are living the van life as a family. All vandwellers are different and so all vans should be different, which is where SYNC vans come in!

Meet SYNC Vans – The Custom Conversion Company With A Difference! 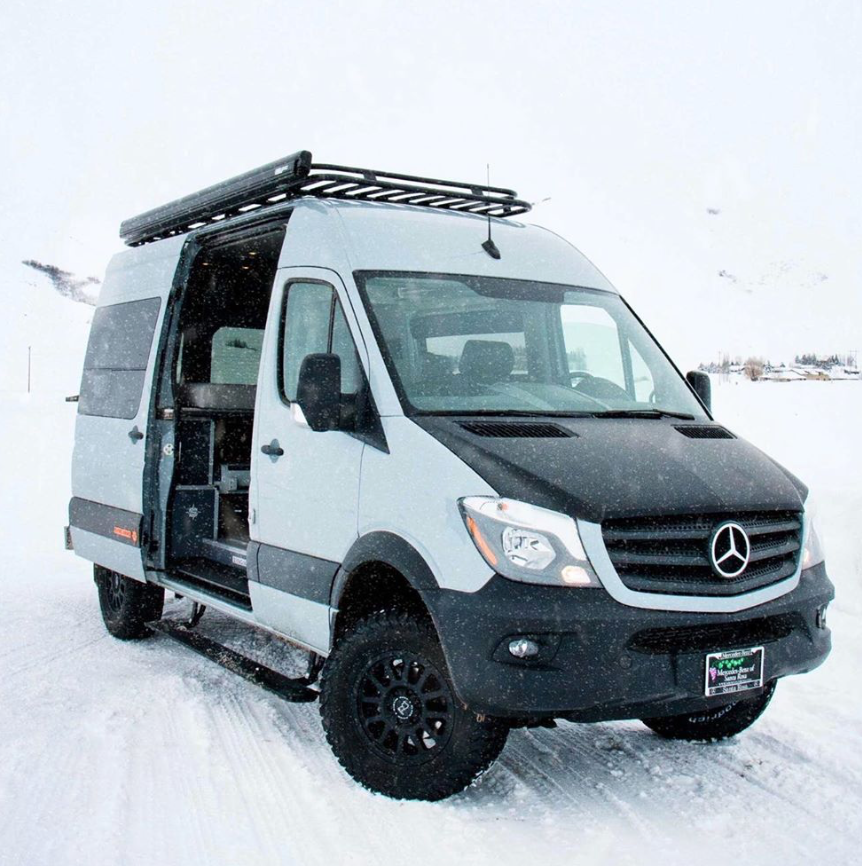 The SYNC Vans custom build that we were lucky enough to tour around at The Overland Expo West was a gnarly off-road Sprinter Van conversion. It’s no secret that we love sprinters here at Van Clan, so it was so brilliant to be able to see such a professional conversion inside an epic van, and we got a really good idea of the sort of thing SYNC vans can offer! It’s important to remember that all of the pictures that follow are different as these vans are completely customisable; we’re just giving you a flavour of what SYNC vans can do!

The Sprinter Van conversion that we’re looking at today by SYNC Vans has undergone a huge exterior upgrade, turning this cargo van into an off road beast perfect for an off grid adventure. At the front of the van is an Aluminess bumper system, meaning the van can withstand any knock the off road track might have to offer.

Built into this system is part of the added Baja Light bar set-up that can also be seen on the bumper as well as on the top of the van. This extra lighting system means this van will light up even the darkest of areas allowing safe nighttime travel, even in the most mysterious and remotest of areas. Also installed in the front bumper is a winch system to help the van out of any sticky situations. To keep the bumper in good condition, this van has an added hood wrap meaning any damage caused by driving off-road isn’t going to touch the actual bonnet of the van.

What’s On The Roof Of This SYNC Vans Conversion?

The roof of this Sprinter conversion by SYNC Vans has roof rack with a ladder mounted on the side of the van to be able to reach it. This is really handy as most people who travel in a van are pretty outdoorsy people and need plenty of storage for larger items of gear that might not be able to squeeze into the van itself. Perimeter lights run around the edge of the roof rack making the van visible to any other road users (and low flying ducks). 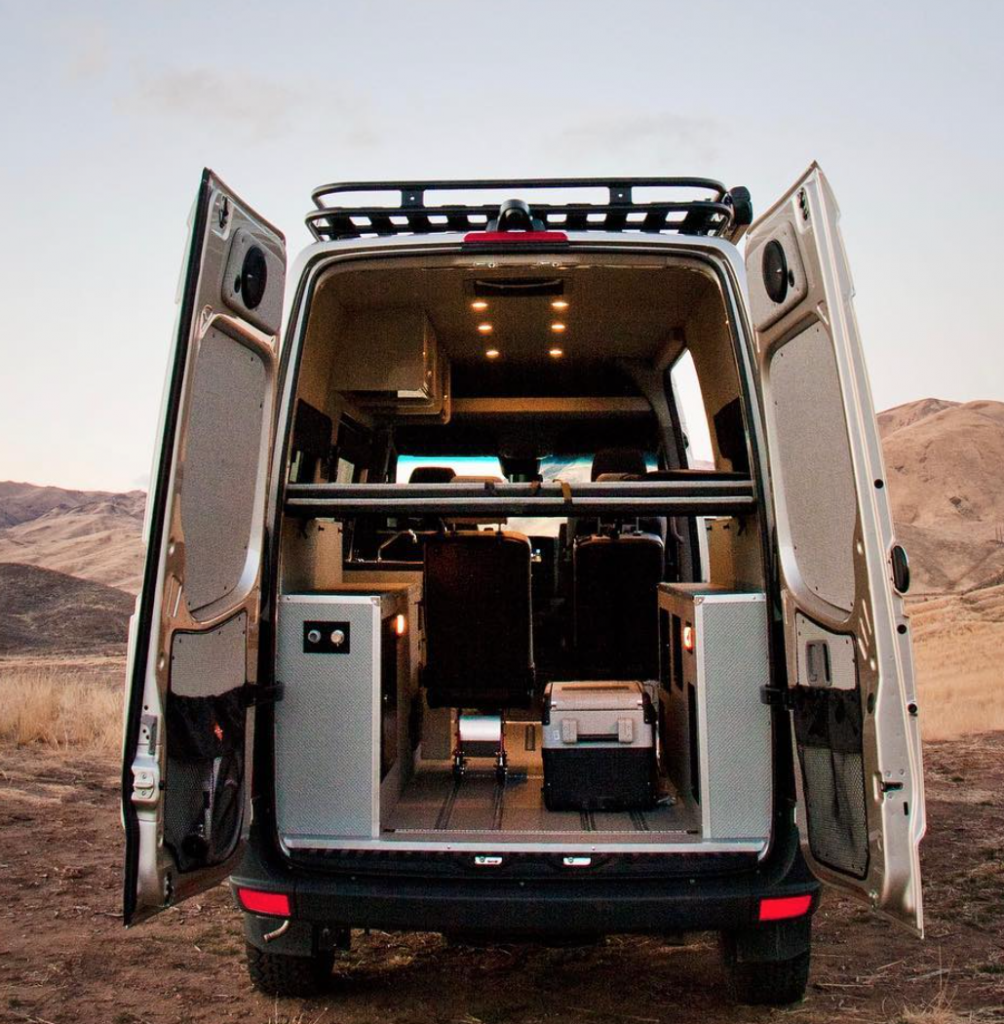 Moving to the back of this SYNC Vans conversion, we can see more Aluminess gear including a rear bumper and a swing arm bike rack. This rack can store two bikes and frees up so much interior storage. As this rack is on a swing arm the bike carrier can be moved to one side allowing the doors of the van to be opened without having to remove the bikes, which makes rear access much easier and carrying bikes less of a hassle. Also at the rear of the vehicle, you’ll find more storage boxes, the spare tyre and an onboard air compressor. This can be used for quickly inflating bike tyres or an inflatable kayak and is also helpful when it comes to cleaning gear off. These guys have thought of everything! 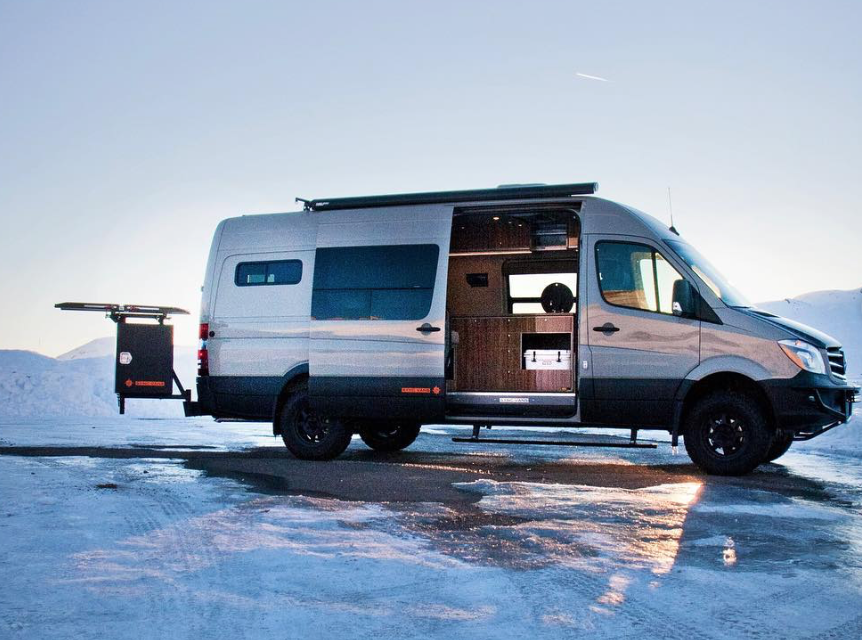 Finally, for the exterior of this conversion is a Fiamma awning with lights running below it. We love an awning on a van conversion as it allows for so much extra living space when in use. An awning also provides much-needed shade or shelter from the elements and means you can chill or cook outside no matter the weather. Having lights integrated into the awning is such a bonus as it means you can stay out long after the sun has gone after creating memories what van life is all about.

That’s a pretty epic exterior up haul and we haven’t even stepped inside yet!

The first thing that stands out when entering this Sprinter custom conversion by SYNC Vans is the colour! This customer has gone for a bright orange theme running through out, making the van completely unique. At SYNC Vans the colours and finishes used are up to you so whatever colour scheme you want, they can make it happen.

As soon as you enter the van it is clear how much space there is to stretch out. This is due, in large, to the removable jump seat that acts as either an extra passenger seat or, in this conversion, an office chair. When not in use this seat can be easily removed from the track in the vans floor to free up loads of floor space, perfect for when its time to use the kitchen. We love this use of tracking on the floor that allows you to easily change the layout and use of the van. When in office mode the van has a swing out table that offers a comfortable and spacious work station. When not in use, it can simply swing back around and neatly tuck away adding again to the versatility of the space.

Below the swing out table is this SYNC Vans conversions air conditioning unit. Air conditioning is such a luxury in a van and it can make the living space much more comfortable to live in. The condenser unit for the air conditioning is beneath the van, meaning it doesn’t take up storage space on the roof. This is a clever move that we don’t see often and allows for more storage within the roof rack.

A cool feature of this SYNC Vans conversion is the electronic retractable bed. During the day, simply press a button and the bed moves backwards tuning into a lounging day bed that is super comfortable for sitting up in. As well as being comfortable to use as a sofa this day mode frees up extra space in the living area so it doesn’t feel cramped inside. We love this design as it allows you to have a full sized bed without taking up loads of space in the day time. It’s quick and easy to use and there is no manual reorganising of bedding and cushions to be done, which is such a bonus. On either side of the bed as insulated and tinted windows, allowing extra light to lighten up the interior of this camper.

Running along the side wall is the kitchen area, with a sink built into the countertop and plenty of storage both for your top cooking accessories above and below. Also below the kitchen countertop is one of the vans two portable fridges, with the other one being under the bed. We love the design and attention to detail of this unit, and how it has been made unique for the van’s owner. To the right of the unit is a Dometic five gallon cassette toilet hidden within a stool that matches the finish of the kitchen unit. I like the fact that it’s hidden away, but it is still there if you need it! There’s everything that you need for a stint of living in here!

The vans large electrical and lithium-ion battery system is all stored neatly out of the way under the bed. The control panel is mounted onto the wall of the van, by the bed, and is kept super simple and easy to use. We sometimes feel that a vans electrical system is over complicated and we like that SYNC Vans have kept the controls to a minimum, keeping life on the road as simple as possible.

There is enough power in this van to run the air conditioning, heating unit, hot water heater, dimmable lights and charge any gadgets you want to bring off the grid with you. All of this is stored under the bed but there is still even more storage space to be utilised- we just can’t believe how much storage this sprinter has! Also in the back is an outdoor hot water shower with a quick release detachable hose, perfect for washing yourself and your gear after a long day of adventuring. 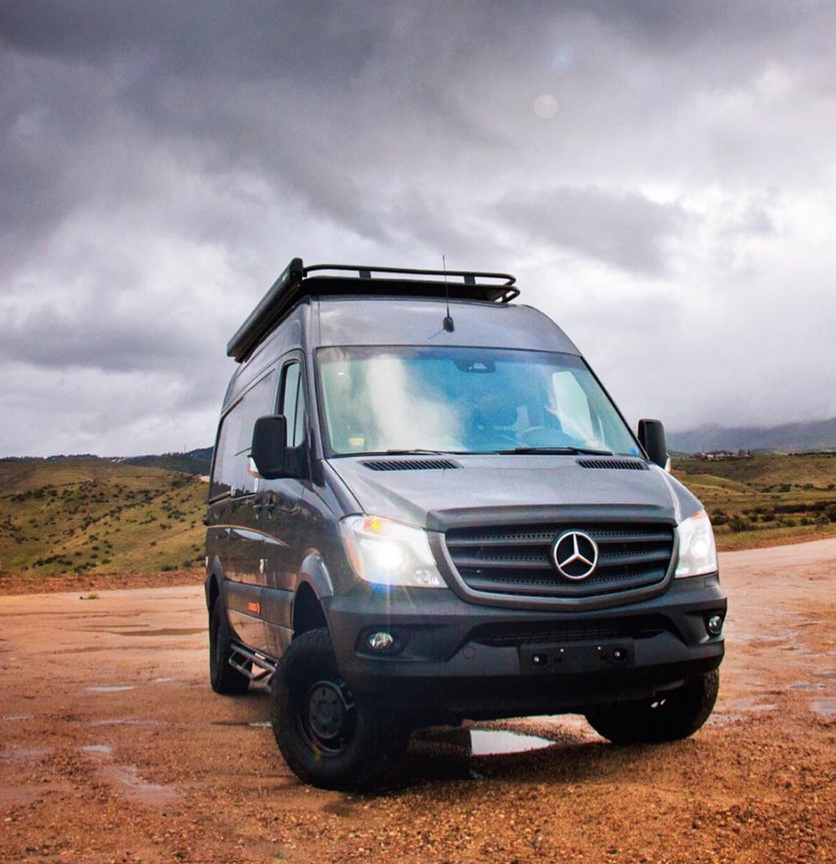 We love what SYNC Vans have done with this conversion; it’s well designed, has everything you need to get adventuring, and is professionally finished. If you love it too and want to create your own custom home on wheels, conversion packages with SYNC Vans start at $32,000 and can include whatever you want! With SYNC Vans custom builds the sky really is the limit.

We’d like to say a massive thank you to our sponsors Four Wheel Campers for hosting us at the Overland Expo West! Let us know what you think of this custom conversion by SYNC Vans by joining the Van Clan over on Facebook, Instagram and Twitter!