VW Electric Campervan Is A New Take On An Old Classic 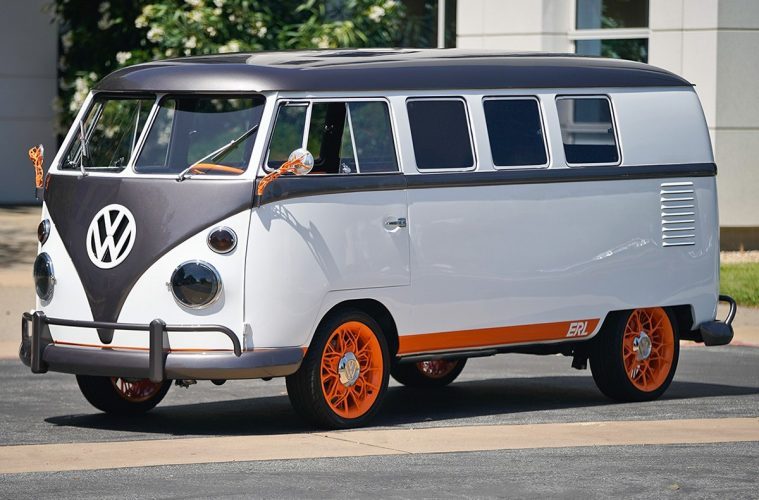 Ask anyone in the street or your 90-year-old granny to name a camper conversion, and they’ll probably come straight back at you with the answer, ‘a VW Bus’, that is unless your neighbour or your mum makes the Carado Axion or did some work experience with Outside Van Campers. The Volkswagen Bus Camper could well be the most iconic camper of all time; from lunchbox designs and pin badges to giant fridges that mimic the front of a classic Type2 T1 Splitty, this quintessential bit of motoring history turns the heads of young vandwellers and seasoned off grid adventure lovers alike. You can even get a toaster that burns the logo onto your bread for crying out loud! To cut a long story short, everyone loves a good VW Bus, and when the VW Buzz was announced as being the new VW Electric Campervan, we all got pretty excited. But then we stumbled across three characters that changed our lives forever – T20. That’s right; the classic beauty is back, and this time she’s eco-friendly.

Have you ever thought about becoming a Weekend Warrior? Does the concept of Full Time Van Life interrupt your thoughts from morning till night? Head over to our Van Lifers and Weekend Warriors Facebook Group and join our evergrowing community of alternative living enthusiasts from across the globe! Compare van life ideas, share vanlife tips on how to build a campervan, and meet van life nomads from across the globe!

Some of you may have kept up to date with the Volkswagen Emissions Scandal over the past few years, and while it certainly didn’t do the company any favours financially or socially, it has prompted them to speed up their efforts to producing top eco campers for future generations. This is one of the best by-products that the world could have hoped for; the T20 is proof of that! With all of the classic elements that saw the VW Bus shoot to fame in music videos and Van Life Instagram posts across the world and a brand new electric set up, this could well be the camper that finally turns electric-motor cynics over from the dark side. So, without further ado, let’s step back in time with a futuristic camper (that made my head hurt!).

The T20 Is The VW Electric Campervan We’ve All Been Waiting For!

Let’s get one thing straight from the off; the VW Buzz divided a lot of people when it was first announced. VW purists hated the idea of sticking a Nintendo Switch style console in the front and having a Tron-style vehicle with their beloved VW badge on the front. Digital Nomad drivers loved the idea of an updated surf-mobile and relished the idea of putting new and modern technology into the iconic shape of the bus they were born too late to own. The T20 VW Electric Campervan is the perfect vehicle to bridge this gap and heal the divide, and it might just change the world of electric campervans forever.

Some of you will not even make it past the header image on this article, and it’s not hard to see why. The T20 looks absolutely stunning with it’s black and white paint job, iconic front swoop and split screen combo, and the all-important VW logo shining on the front like a beacon of hope. You’d be completely forgiven for thinking that this was a photo of one of the original busses hot off the production line, but if you look closely, you’ll see some tell tale signs that give the game away.

The T20 VW Electric Campervan marks 20 years of innovative thinking and engineering from the German automotive giants, bringing the beloved 11 window Type2 T1 back for a brand new generation. The front of the T20 looks a little like the Iron Giant, with its true-tone headlights resembling eyes and the front bumper creating a toothy grin. Is the orange motif behind the VW logo the symbol of a different type of energy burning brightly under the hood, or is it just a contrasting colour that features throughout the rest of the build. I guess the answer depends on how deep you are, so I’ll leave you to make up your own mind here.

Is it just me, or do those wing mirror brackets look a little like branches, almost as if they have grown out of the camper itself? That might be my imagination moving towards a much greener and eco-friendly explanation; it may just be a psychedelic pattern that the designers wanted to include to pay homage to the VW Bus’s illustrious past. Whatever you see when you look at the T20 is irrelevant, what’s important is that it’s impossible to not get drawn into the finer details.

If the crazy Martian red-weed design on the wing mirrors didn’t get your blood racing, then the design of the wheels should definitely do the trick. What could be cooler than a wheel that looks just like a living organism? Sticking a polished chrome hubcap in the middle with the VW logo on it, that’s what! Aside from being some of the coolest wheels on the van life scene, the T20 also has a few other hidden features that put this camper ahead of the competition.

VW have teamed up with Porsche to create an active air suspension system like no other. You can now lower or heighten your bus to your exact specifications without having to get the toolkit out and getting your hands dirty. The camper also rises to your desired height when you approach it; has Knight Rider started working for VW by any chance? There’s also plans to have an iPhone style face recognition system to unlock the car as you approach. This biometric access set-up works via a 720P camera positioned into the drivers window; it’s wide angle to catch you as you approach from either side and should prove effective for anyone who’s forgetful with their keys.

Tell Us About The Engine!

I know that some VW engineers will disagree with me when I say this, but old VW’s can be a little temperamental. Some of these busses are pushing 50 years old and more, so it’s no surprise that some of the older models are constantly heading to garages or being towed back to the safety of the driveway to be tinkered with a little bit more. Parts are readily available for those that can afford to play around with their beloved rides, but having a brand spanking new electric engine underneath the hood is bound to be attractive for vanlifers who love the ride but don’t know what they’re doing when it comes to swapping out parts or blowing a gasket while trying to fix a blown gasket.

Even the electricGT engine has a retro look and feel about it, but I can confirm that it’s purely electric and emission free. It delivers 120bhp and 173lb-ft of torque, which is well over double what the original T1 would kick out back in the day The internal combustion engine has completely  to make room for a battery with a capacity of 10kWh. To give you a little bit of perspective, the VW Buzz has a 111kWh battery pack and kicks out almost 400 horsepower, making it the more powerful of the two campers. But if you’re going for something with a classic feel over a space capsule from the latest Star Wars movie, then you probably don’t even care about how fast it can pull away from the curb or what torque even means. All you need to know is that you can rock up to the beach in good conscience knowing that you won’t be polluting the air or the water with toxic fumes.

Take A Look At The Inside Of This VW Electric Campervan

The thing that I love most about the cab in this VW Electric Campervan is that they haven’t added a different style of steering wheel or gear stick. The concept is exactly the same as it was in the original 60’s busses, with the long steering wheel and simple gear and brake levers. They haven’t tried to overcomplicate anything, sticking true to the original design elements and simply enhancing them with the new colour motif and living symbiotic style design quirks. The front bench is a nice feature; who needs swing around captains chairs when you can lounge on a sofa while driving?

The inside of the camper follows a similar theme to the cab, carrying on the front bench theme in an L-shaped sofa that is once again held up by what I am now going to refer to as ‘the branches of change’. You might have also spotted that neat geometric pattern in the front of the cab too, a nice little feature that’s bound to be a talking point whenever you invite guests into your retro tiny house.

What Else Do We Know About The Inside?

The T20 VW Electric Campervan comprises of 11 windows just like the busses of old. While it might be a bit of a condensation trap (is it even a VW Bus if you don’t have steamy windows?), it will certainly let a tonne of natural light into your camper. There’s no excuse not to sleep in on a morning now, but it will also make your living space feel more open, leaving you to be more at one with nature like the top eco campers that you all are!

One element that the original T1 certainly didn’t have was a holographic infotainment system. I would imagine that the cool-cats from the Sixties wouldn’t even know what that was, although if the stories are true, then they would probably have had their own methods for seeing strange images float through the air before their eyes. VW gone for a much more scientific approach, installing a holographic display into the dashboard that creates 3D images that you can see without wearing those weird blue and red glasses. It’s like a Nintendo 3DS but without any games and an odometer. Pretty cool, right?

The T20 VW Electric Campervan really is a work of art. The design elements that VW have implemented into this classic build take it to another level entirely, giving a new lease of life to a timeless classic that we never even knew needed updating. I honestly think that the T20 will connect old and new fans of the VW brand together again, paving the way for a brand new generation of sun seekers and surf searchers across the globe.

Doe it matter that the T20 isn’t as fast as the ID Buzz? Of course not; who cares about speed when you look this good. Does it matter that the engine is electric? Nope, in fact, it’s more powerful than the original engine that these busses had back in the day and it’s 100% clean and emissionfree. Electric cars pay less or no tax because of this fact, so you’re going to be helping the environment while looking bad-ass and saving money at the same time. If that doesn’t persuade you, then I don’t know what will! I haven’t managed to find a proposed price for the T20 yet, but we will keep you updated as soon as we get the information. Whatever the cost, I can see us having one of these for the Van Clan fleet in the near future!

How to Deal With Condensation in a Van

How to Find Free Camping Near Me in the US & Canada