I’ve always maintained that there are two different types of camper enthusiasts out there in the big wide world that we call home. There’s the group that like to ramble around and take in the scenery, enjoying the route along the way in one of our top eco campers; and then there’s the group that like to plough through the wilderness in an all terrain camper in a frenzied search for hidden treasure and long lost relics. If you’re in this second group (if you’ve clicked onto this article then we’re going to assume that you are!) then this monster camper from Russian adventure experts ‘TechnoImpulse’ will make your mouth water. Read on and check it out!

Meet The Rocket Z SUV – A Vehicle Built For The Apocalypse 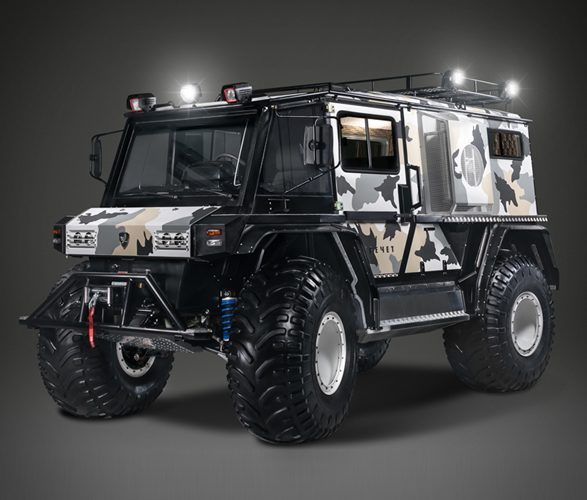 When people tell you that the only things left standing after a nuclear war will be cockroaches, they obviously didn’t learn about the Rocket Z SUV. This Monster Camper embodies the word ‘beast’, and it’s so powerful that you’ve got to see one in action to believe it exists!

First, let us take a little look at the creators of this Camo Warrior. TechnoImpulse (they should definitely start a band with that name) specials in creating extreme exploration vehicles that can cope with the wild and rocky Russian terrain. Just like AEV souped up the Four Wheel Campers the Brandon and I took around California, TechnoImpulse has made this monster camper into a nine-person vehicle that can get you from A to B no matter how many raging typhoons or giant rock golems stand in your way.

Half army vehicle, half zombie destroyer (maybe that’s what the ‘Z’ stands for in the ‘Rocket Z SUV’), this monster camper would certainly look the part hurtling through a Siberian winter scenescape, but does it cut the mustard when you get down to the facts and figures.

Show Us The Outside! 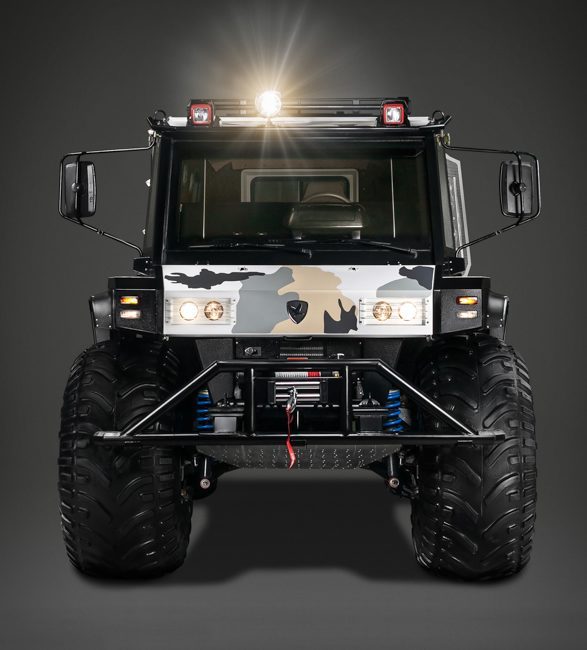 We don’t mean to pry underneath the chassis of strange vehicles without being correctly introduced (this is a family publication after all) but have you seen that sexy suspension?! When TechnoImpulse said that this beast could conquer any terrain they weren’t joking – this could even give the EarthRoamer a run for its money when it comes to tackling the wild and off grid living. This monster camper is fully equipped with 4×4 suspension, power steering boosters, and giant off-road tyres that can make mincemeat of sand, snow, ice, and probably air if you gave them a good shot at it. 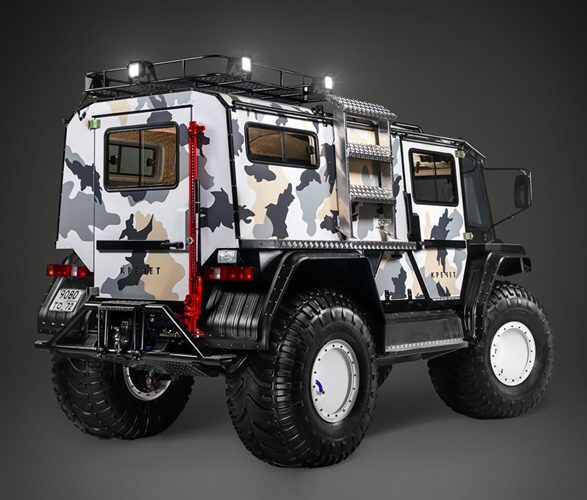 From the flip-down stairs on the roof to the roof rack itself, you can instantly tell that this vehicle has been built with adventure in mind. No expense has been spared with the gadgets and gear that has been added to this monster camper; from the powerful Hella lighting to light up the night sky as you cruise down forest paths, to the robust looking chassis, camo wrap and hefty winch for towing your weaker friends back up out of puny ravines.

The Rocket Z SUV is pretty quick for such a big unit too, thanks to the 100-hp turbodiesel engine that’s tied to the chassis by lighting wire and held in place by the might of the gods. Seriously though, that’s one big engine; no wonder they called it the Rocket! 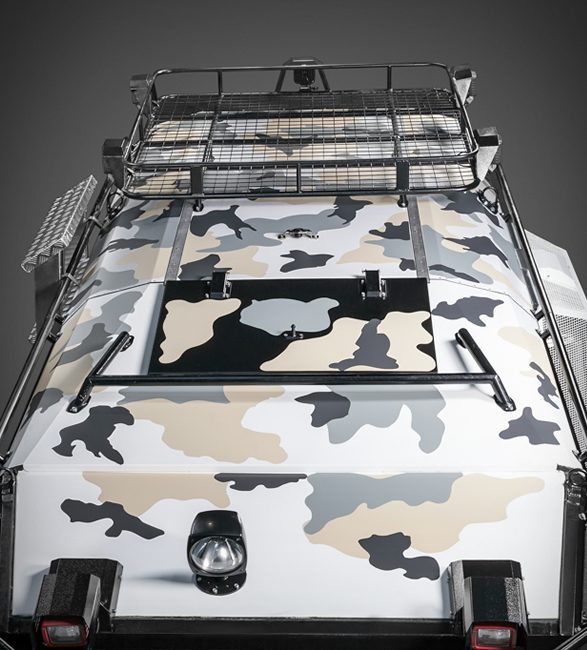 What’s Inside This Monster Camper?

While the outside boasts most of the exciting features, the inside is pretty plain and functional. But then again, it has to be if it’s going to house nine people as you rocket through the wild like Bullet Bill (that’s one for any Mario Kart fan out there). The seating area looks pretty comfy to say that this is primarily an expedition vehicle, and when folded down it makes one incredibly spacious bed that could rival any mattress company out there. 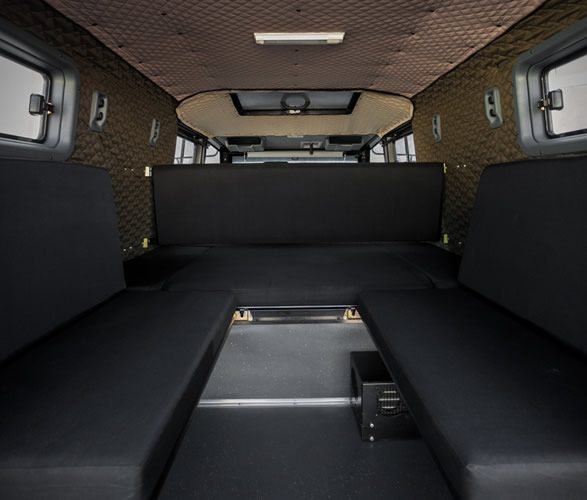 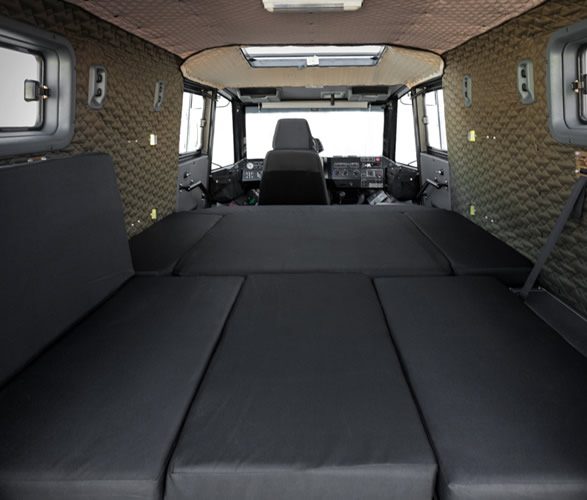 From what we can see on the pictures above, there looks to be a diesel heater on board to keep you toasty in icy temperatures, and there are sockets all around the insides for charging your devices up on the go. It might not be the homeliest of conversions, or entirely suitable if you’re used to whipping out your top cooking accessories to impress the campsite neighbours, but with a few van life essentials thrown into the mix, you could turn this from a monster camper into a comfortable tiny home in no time at all. And, if this model isn’t big enough for you, TechnoImpulse also do a bigger Zombie Rocket Machine called the Rocket Z 310-91 that has a 6’x6’ layout! Think of all the space for extracurricular activities! 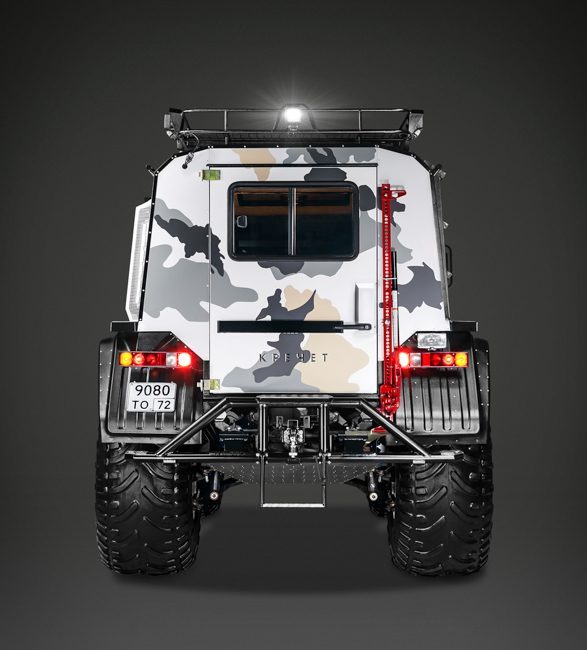 TechnoImpulse makes adventure vehicles, so it’s no surprise that they have produced a mean looking beast that looks as though it was discharged from the military for being too extreme. If you’re looking for a tiny eco house or fall into our meandering vandwellers category (we’re not judging, I’m also a chiller when it comes to adventuring) then it’s probably not going to be for you. But then again, if you want a new adventure bus then the price might change your mind.

The model that we’ve shown above is priced at $85’000 (around £66’000) which is good value if you’re looking for something that can cope with tricky terrain. It’s not the homeliest of vehicles, but then again, it was never intended to be. TechnoImpulse has stuck to what they do best; making a monster camper range that knows no bounds, and for that, we salute them!

Thinking about getting your own all-terrain vehicle, or maybe you feel that they are a complete waste of time? Join us on Facebook, Twitter and Instagram and let us know your thoughts!