We’re here at the Overland Expo West with our sponsors Four Wheel Campers, checking out more some of the awesome vans, trucks and overlanding goliaths that we’ve been drooling over ever since Van Clan first began. The atmosphere here is electric, with so many likeminded people all interested in living the van life, travelling in a van, and looking to pick up van life ideas from both the vast array of vendors and the loyal spectators who have come to see their favourite vans in the flesh. As a matter of fact, we’re heading over to the Nomad Vanz stall right now to check out a camper that Fred Flintstone would be proud of; the Yabba Dabba Doo!H

This article is sponsored by Four Wheel Campers. They were kind enough to invite us to Overland Expo which gave us the chance to produce this article for the Van Clan community. Check them out if you’re interested in the best pop up truck campers around.

If you haven’t heard about Nomad Vanz before, then you’re in for a real treat! Based in North Vancouver, they specialise in creating gnarly off road Mercedes Sprinter conversions that stand apart from the crowd. They are masters in the sacred art of the camper conversion, working tirelessly to make your dream tiny home a reality. The Yabba Dabba Doo is perfect for anyone wanting to take van life travel to the next level, as it’s packed with more van life essentials than you could shake a gear stick at! So, if you fancy yourself as an outdoorsy person who loves to spend their days on the beach, strap yourself in and join us as we find out more about this beach house on wheels.

What…a…camper! You can tell just by looking at the outside that this is no ordinary van. If you were hoping that we were going to reveal a stealth camper van, then I guess you might be a little disappointed. This machine is definitely for the digital nomad who wants to make his or her mark on the world, and we absolutely love it! While still an adventure bus, The Yabba Dabba Doo differs from some of the vehicles that we’ve seen here at the Expo in that its primary focus is on creating a comfortable living environment rather than protecting and hauling expensive gear around. There’s something for everyone here at Overland Expo West (just like there is at Van Clan!)

Let’s take a look at that amazing geometric decal on the front of the van. If the Yabba Dabba Doo is Nomad Vanz take on a beach house, then surely this colourful design depicts all of the adventures that you’re going to have in the sun, chilling on the and diving in the water. It reminds me a little bit of a mosaic of the passing of seasons, which is a great link to the fact that this camper can be used all year round and not just in summer. How many beach houses look and feel this comfy in the middle of winter? Answer; just one (it’s this one in case you weren’t following the direction of my thoughts).

Nomad Vanz like to do things differently to other camper conversion companies, and the names of their products reflect that. At first terms like ‘The Talking Head’ or ‘The Mother Ship’ might seem confusing, but a quick scout on their website gives you all of the information that you’ll need to crack their super cool code. Life would be boring if we were all the same after all!

First up, let’s talk about the Deck Rack on the roof of the camper. Head up the custom built ladder to the top of the van and you’ll find enough space to store your surfboards, lock boxes, additional luggage, and anything else that your off-grid heart desires. The roof rack also houses the coolest light bar that we’ve ever seen, giving you a beacon of hope in dark places (very LOTR) when you’re off roading at night, and it’s also a great talking point when you’re parked up during the day!

At the back of the van you’ll find the Talking Head spare tyre rack, which provides you with a safe place for you to keep a spare if anything should go wrong while you’re blasting through the wilderness. There’s also a place for a jerry can to store fuel too, keeping you off the grid and away from the city.

The Mother Ship, which unfortunatley is not a space-age craft, is a 175 litre stainless steel tank mounted in the location that the factory spare tyre would normally be. This feeds through to an onboard shower in the van, which is super useful for keeping clean on the go – Nomad Vanz know how to look after their nomads! You can even move the shower outdoors too if the view is nice!

See those all-terrain tyres? That’s the Agile Off Road RIP kit with Evo Corse DakarZero wheels. If you’re familiar with the Dakar rally, then you might have some idea as to how these wheels might cope off the grid. You might also just be able to spot that Rhino-Line style paint job on the front bumper, helping to protect your camper from any flying stones or grime that might otherwise chip or corrode your paintwork. Now that’s the sign of a well thought out build!

Are Nomad Vans Built For Living Off Grid?

It would be far too easy for me just to say yes, so I’m going to talk you through exactly how Nomad Vanz campers are built for the off-grid lifestyle. For starters, let’s take a look at the electrical system in the Yabba Dabba Doo.

There are no lead-acid batteries anywhere near this build; Fred Flintstone would probably have preferred tiger-power, but Nomad Vanz have got something much better. Their signature Litihum-Ion package provides perfect performance even in ice-cold temperatures, and provides an increased lifespan to keep your electrical set up ticking over for years to come. The packages start at 200amp hours, but can be converted all the way to 11 and produce 1200 amp hours if you need that extra off-grid boost! Nomad Vanz campers also come with a state of the art charging system to keep everything topped up while on the move. These guys are serious about off grid living!

Step Into the Command Centre! 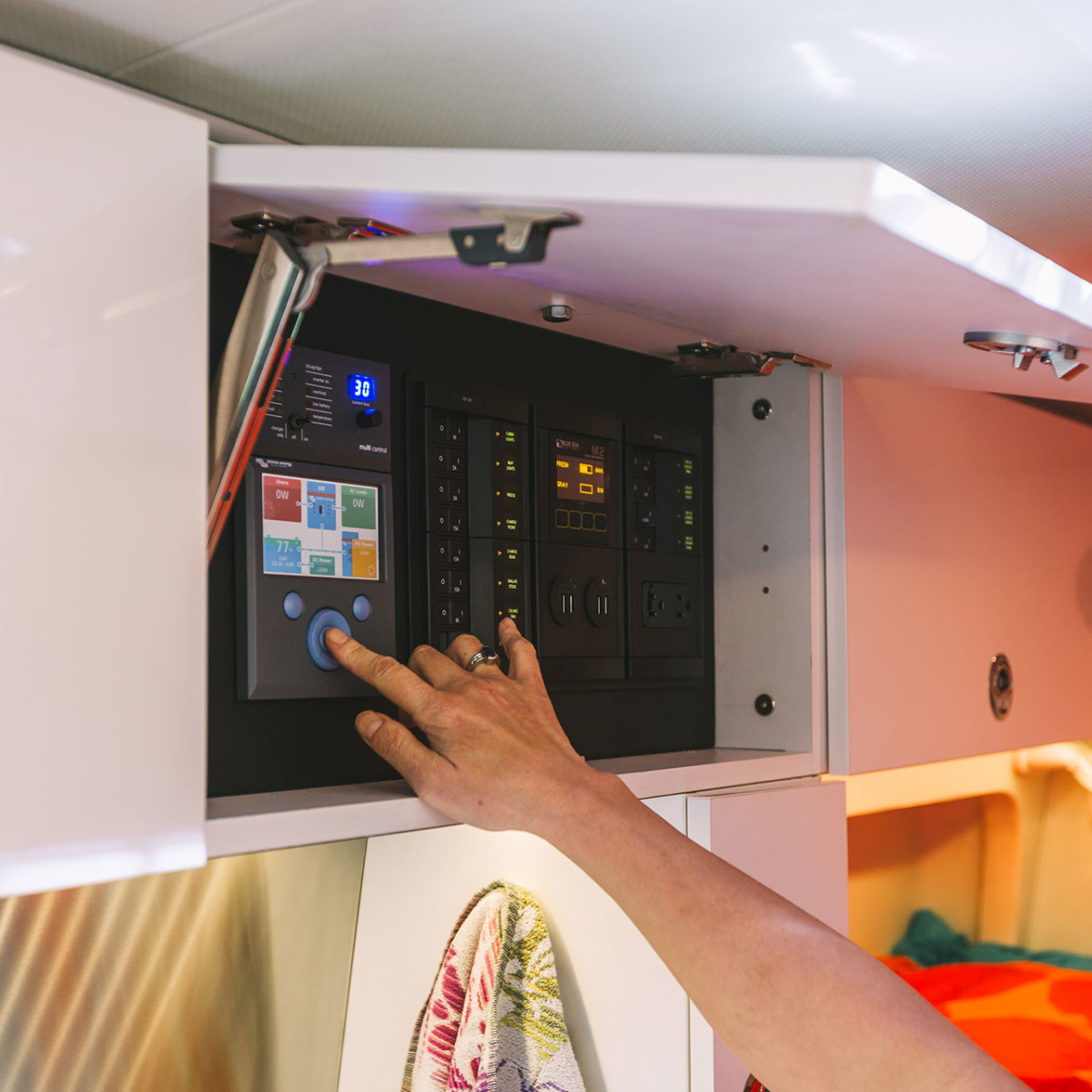 Nomad Vanz always to give you an unprecedented level of control, both in the build of your camper and once you drive it off the forecourt. The command centre is a prime example of this, easy access to all of the key information that you need to know regarding your consumables. It’s hidden away behind a sleek looking and provides detailed readings of your battery levels, solar and alternator inputs. You can check to see how hot your water is and turn on the furnace, and you can also monitor your water levels in the fresh and grey tanks. 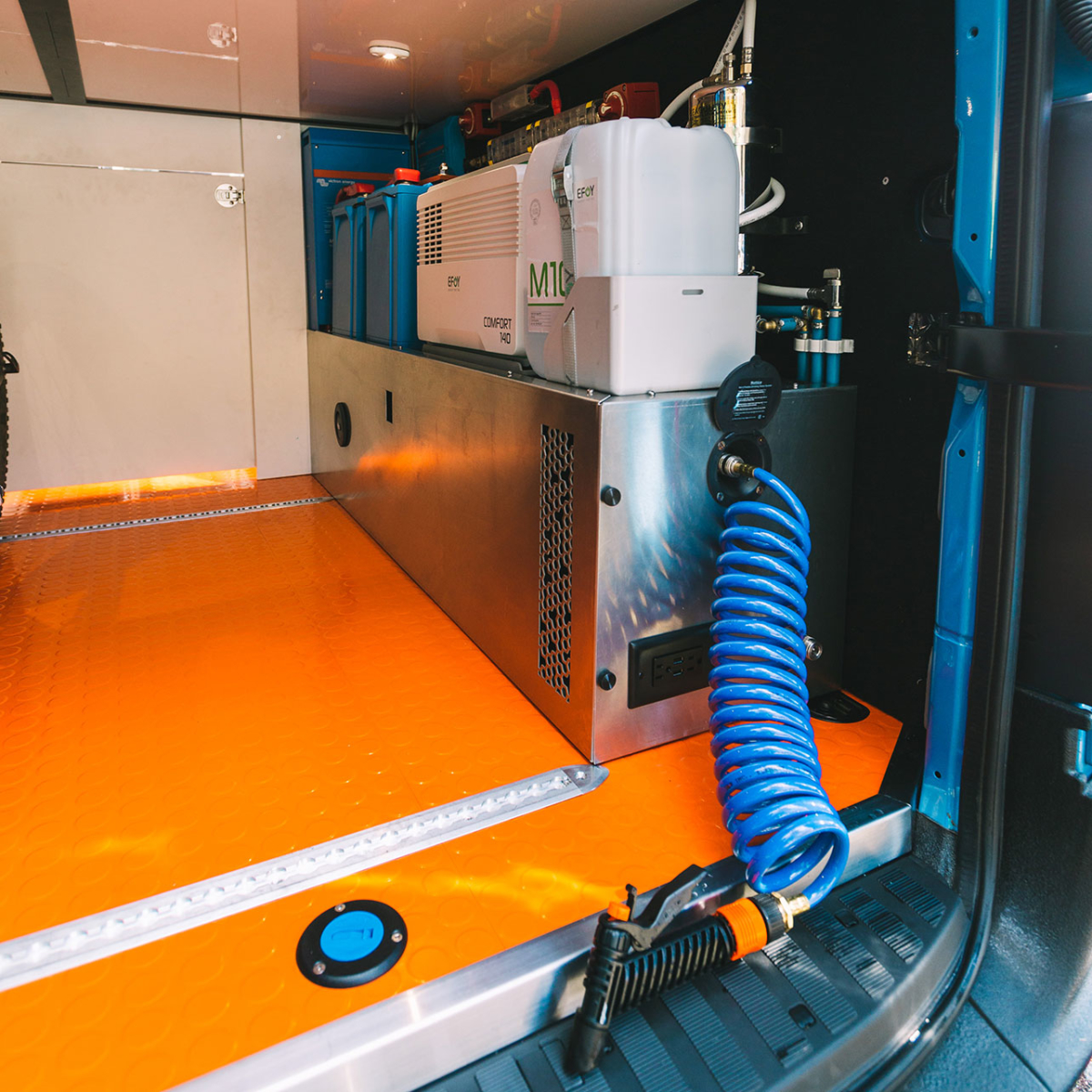 There are a lot of electrical elements in this build, which would surely mean lots of colourful wires that might get in the way. Luckily, everything is hidden away in a neat little box called ‘Ground Control’, with honeycomb air holes to keep everything from overheating. It’s these little behind-the-scenes touches that set Nomad Vanz apart from their competitors.

What’s Inside This Nomad Vanz Camper?

The colourful palette on the exterior continues once you step into the camper. I love the tongue-and-groove cladding style floor and the fresh looking walls in the Yabba Dabba Doo; a far cry from the stone cave that the van’s pre-historic namesake used to call home. Two comfortable passenger seats fold back into an extra bed for a child or friend who refuses to stay at home while you go our adventuring, and if you look closely, you’ll see that the upholstery has been inspired by the classic Volkswagen Bus Camper of old. This beach hut really has some surf vibes now!

The adjustable table swivels back and forth and can be positioned wherever you need. It’s made from nice looking wood too, and compliments the chopping board/sink cover in what Nomad Vanz call the ‘Gourmet Kitchen Package’. As well as boasting a spacious sink and plenty of food prep space for you to go wild with your top cooking accessories, the Yabba Dabba Doo also comes with a Wallas 800D Ceramic Diesel Stove and front and rear Vitrifrigo fridge/freezers. That’s right; this thing comes with two fridges, so you’re never too far away from a crisp and refreshing beverage!

What’s The Bedroom Like In This Nomad Vanz Creation?

Nomad Vanz understand the importance of a comfortable nights sleep, which is why this cosy drawbridge bed is more than big enough for starfishing in while dreaming about those epic jumps you made on the downhill trail earlier in the day. Blackout blinds keep the sun out of the van, allowing you to have a well-deserved sleep-in, and the handy pouches on the back doors are great storage solutions for keeping your books, glasses, watch, shoes and more in!

Speaking of downhill trails, this Nomad Vanz camper comes equipped with a handy bike storage area underneath the bed, as well as a built-in tyre pumping station to keep your wheels in perfect condition and a fixing station. Who says practical adventure vans cant be stylish and comfortable at the same time! 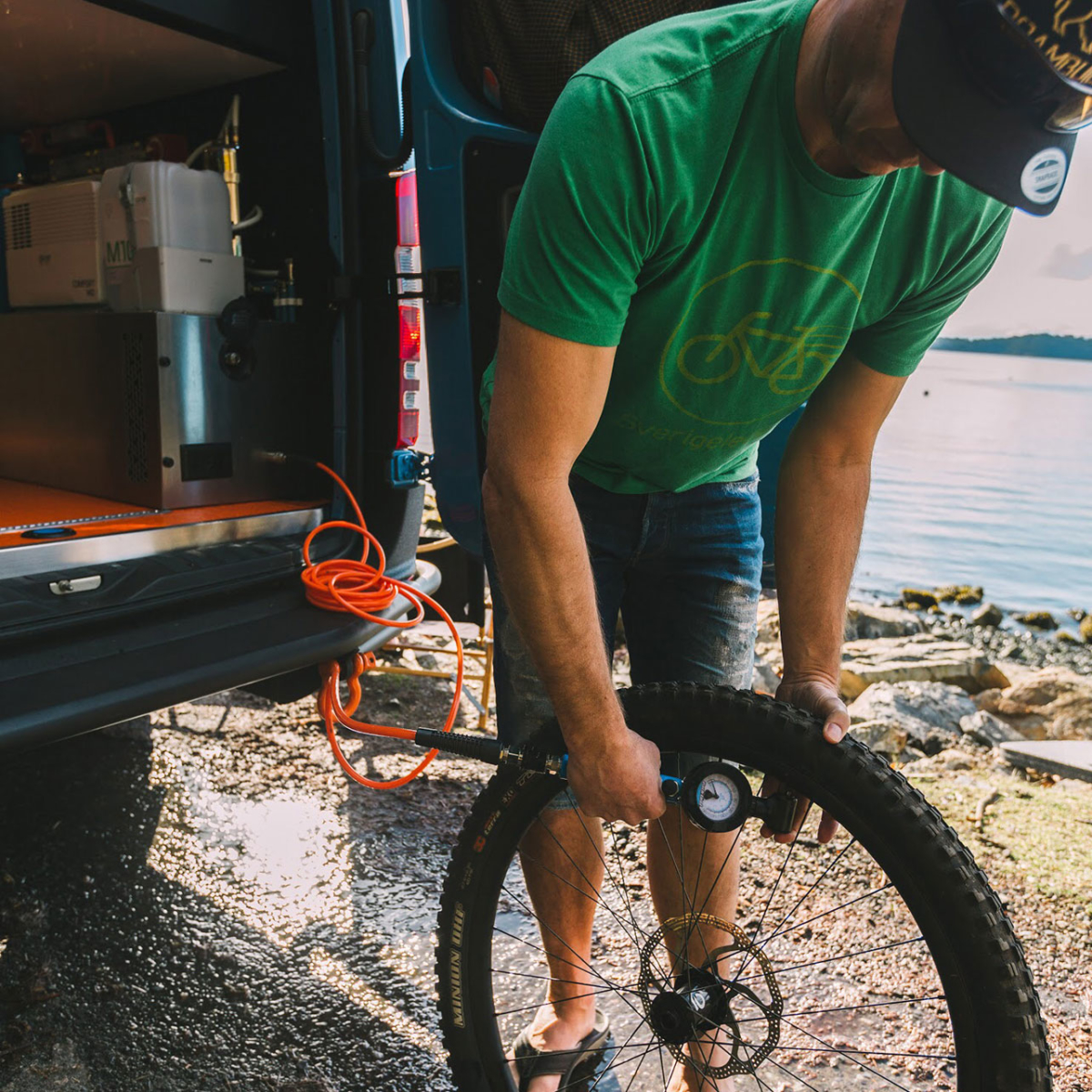 Nomad Vanz never to surprise us, and we’ve had a blast looking around the Yabba Dabba Doo. This camper is living proof that affordable tiny homes can be both adventurous and stylish. Granted that this van is best suited to bikers who like luxurious camping and not quad bikes or , but Nomad Vanz know their market well and have catered to their needs in the best possible way.

We love the Yabba Dabba Doo and would love to come out to Vancouver to try one out for size sometime (this is definitely not us angling for an invitation…yes it totally is). Due to the custom nature of this van, we don’t actually have a price to give you. We do know that premium builds start at around $120K, so you could be looking at somewhere around that price mark if you want to drive a Yabba Dabba Doo back to Bed Rock (I really want to watch the Flintstones now!). Let us know your thoughts on our Facebook, Twitter, and Instagram.

Once again, we’d like to thank the mighty Four Wheel Campers for inviting us over to Overland Expo West. Head to their website to learn more about their amazing range of pop up campers!