Mini Camper Is The Home On Wheels You’ll Never Want

When it comes to living the van life, the question of ‘does size matter’ instantly divides opinions. How small does a tiny house have to be before it’s more of a shed than a liveable space? Do you need to stand up in your stealth camper van? Is a high roof panel van the only vehicle for off grid living? If you have spent any time around other members of the human race in your lifetime, then you will have undoubtedly heard the phrase ‘good things come in small packages’, and it seems that everyone’s favourite small car manufacturer has taken this to heart. The Mini Camper is, you guessed it, a camper that has been built into the back of a Mini Clubvan. Does this mean that you don’t need a monster camper to enjoy all the benefits of an adventure bus? Read on to find out!

Fancy yourself as a weekend warrior? Looking to give full time van life a try? Head over to our brand new Facebook Group and join our ever growing van life community!

The Mini Camper is the first of three camping vehicles that Mini are showcasing to promote a ‘less is more’ approach to camping, alongside a roof top tent known as ‘The Mini Countryman All4Camp’, and a small teardrop trailer called ‘The Cowley Caravan’, which is small and light enough to be towed by a Mini, but big enough to sleep two people! It’s not often that you get a ‘3-in-1’ article here at Van Clan, so make the most of it as we prepare to dive into the world of the Mini Camper! 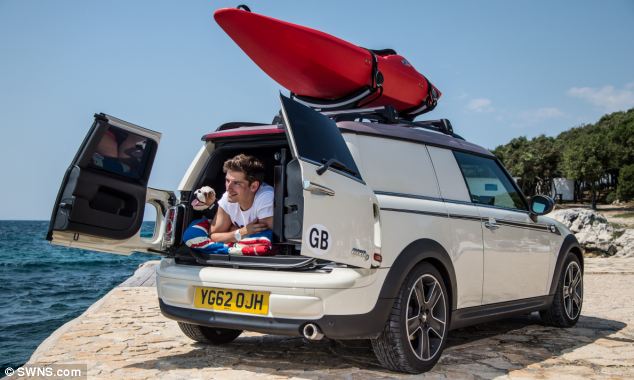 No, your eyes are not deceiving you. You are currently looking at a picture of the smallest camper in existence. I have only ever been in a mini once, and it wasn’t an experience that I would want to repeat in a hurry. I felt a little bit like an under-qualified contortionist as I scrambled down off the curve into the passenger seat, and endured the rest of the journey with my chin tucked over my knee like a broken Nutcracker. Coincidentally, it could have been called the Nutcracker as every bump sent a shooting pain into my…ahem…where was I.

While I had failed to enjoy this quintessentially iconic British car of legend, many people love the versatility that comes with such a small and nippy little motor. If you’re looking a camper conversion that doesn’t take up two bays in a parking lot and can fit underneath the height restriction barrier at the local IKEA, then the Mini Camper could be well up your street. In fact, it’s so small and narrow that it could practically fit up any street.

What’s Inside This Mini Camper? 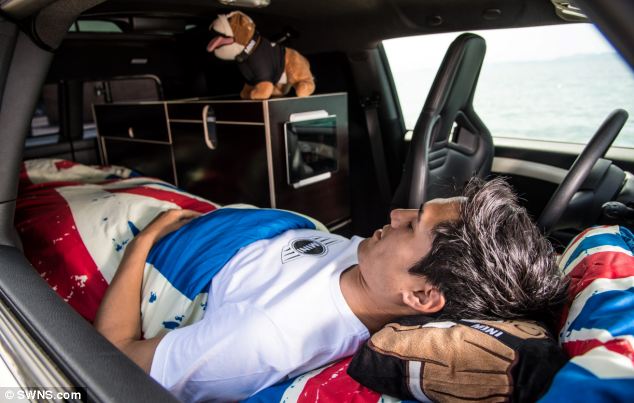 The Mini Camper has been designed to be used by a single traveller, so would be good for solo female vanlifer or an off-road guy who likes their own company while on the road. On first impressions, the sleeping area looks a little bit like the kind of tunnel that you go into when you have a CAT scan and would make me feel a little claustrophobic. For some people who like sports such as caving and potholing, however, I can imagine that it would be quite roomy and spacious. 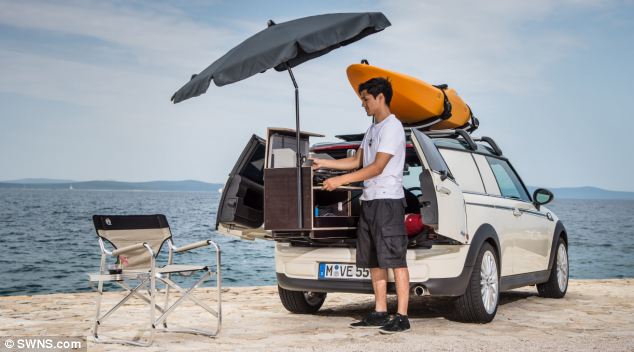 The Mini Camper comes complete with a small extendable kitchenette that you can pull out and use to cook outdoors. It has plenty of storage for all of your top cooking accessories, as well as a stove and a fridge for keeping those ice cold beers in for a night relaxing and looking up at the stars. You might be surprised to know that there’s also television, a built-in heater, and a glass roof for gazing out at nature while you try to adjust your head to fit comfortably by the steering wheel.

Mini have quite impressively fitted an external shower into this build too, which is rather extraordinary considering how little space there is. We haven’t seen any information as to how big the fresh and waste water tanks are, but we would imagine that you would have to be near a water source if you wanted to fill up again after washing down.

The major downside to having such a lack of space is that there is no toilet in this build, but that doesn’t mean that you couldn’t take one of those portable toilet seat/bin bag contraptions along with you for when nature runs its course.

Perhaps the most impressive feature of all is the roof mount, which is strong enough to hold a kayak on top. Now I know that I started off by saying that this was a bit of a ridiculous idea, but as much as I laugh and scoff at the small nature of this camper, you can’t deny that it has everything that you need for a basic stint of off grid living. Fair enough, you probably couldn’t spend anything more than a weekend in here without wanting to tear our your eyes and run into the forest in search of large open spaces, but if you’re looking for a cheap way of getting off the grid and don’t have the space for a massive camper like the Ford Earthroamer, then this would certainly do the trick. 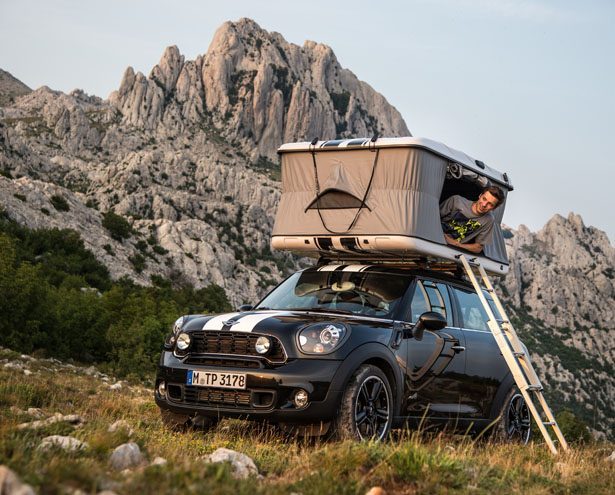 In addition to the Mini Camper, Mini also created a rooftop camper designed to fit on top of the Mini Countryman. You might have seen our previous article on the All4Camp, and to be honest I think it is a much better idea. Adding a sleeping pod onto a tiny car is a great way of spending time off the grid, and while it doesn’t have any of the inbuilt features of the Mini Camper, it does provide a nice place to catch some z’s under the stars. 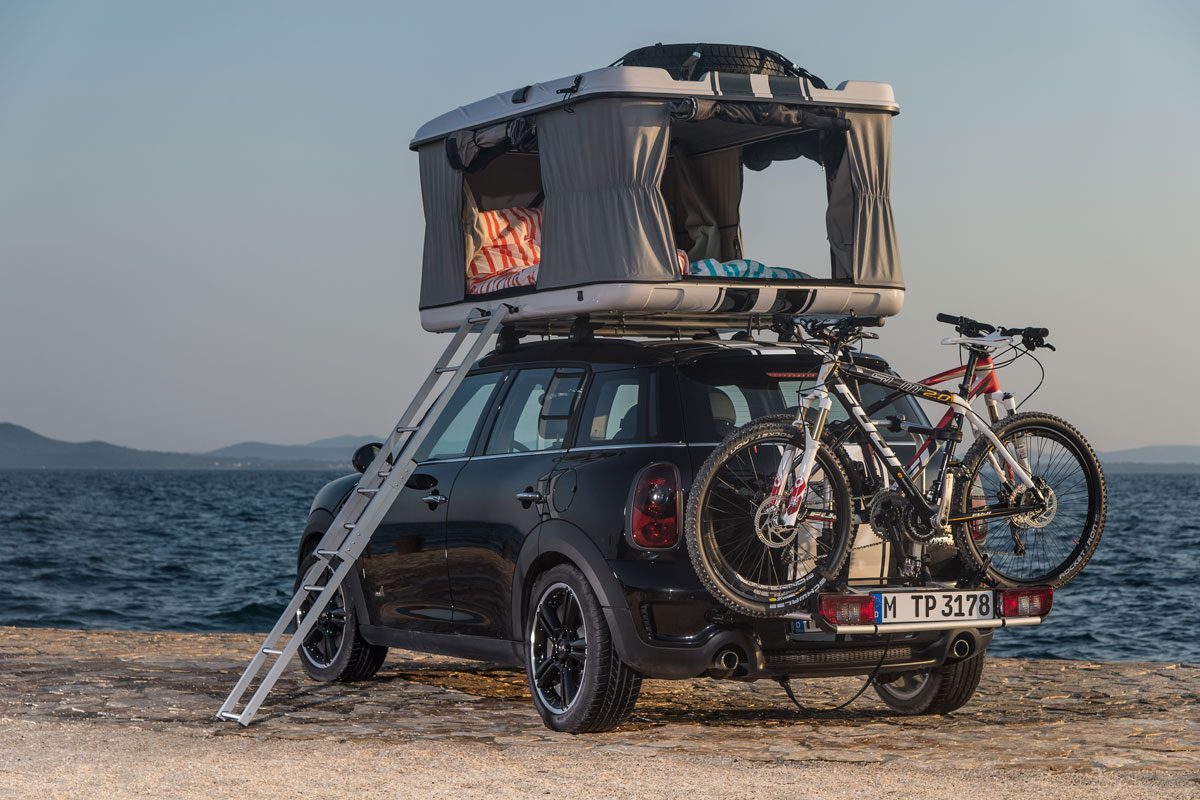 You can easily store van life essentials such as a camper shower, a travel hammock, your BioLite CampStove and other necessary accessories on the Mini’s back seats, and enjoy a much more ‘back to nature’ way of living without feeling as though you are part of the inner workings of the car itself.

The All4Camp is designed with simplicity in mind. It opens by adjusting two easy to use clasps and pulls up via the included handles. Inside you’ll find a comfortable foam mattress that is big enough to fit two people, as well as some LED’s for a spot of night time reading! This Mini Camper also comes with a folding ladder so that you can access the roof without having to scramble up onto the seats. All in all, it’s a nice and sturdy rooftop tent, and at £2’400 it won’t exactly break the bank either. 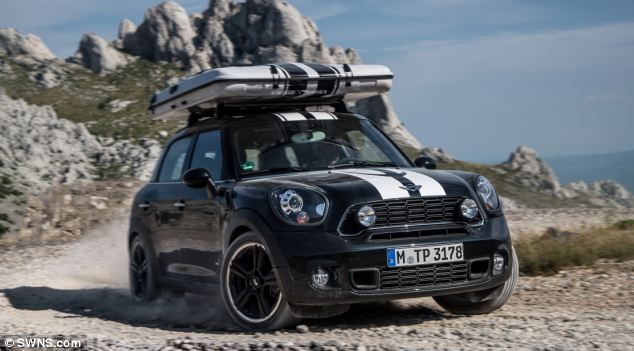 The Cowley Caravan – The Most Sensible Mini Camper?

Last but not least, we have the Cowley Caravan, a small and lightweight trailer that can be attached to the back of your Mini Camper or ordinary Nutcracker. This teardrop trailer has all of the classic elements of all of the best teardrop trailers; the signature shape, the outdoor kitchen in the rear, and the hobbit hole side door that provides access to the living area. While the Clubman Mini Camper might have been a way of Mini proving that they could hold their own in the ‘home on wheels’ market, the Cowley Caravan is a much more spacious and luxurious way of living on the road. It even has a solar package to keep all of your gadgets charged up on the go, making it perfect for the digital nomad who likes to keep things low key. 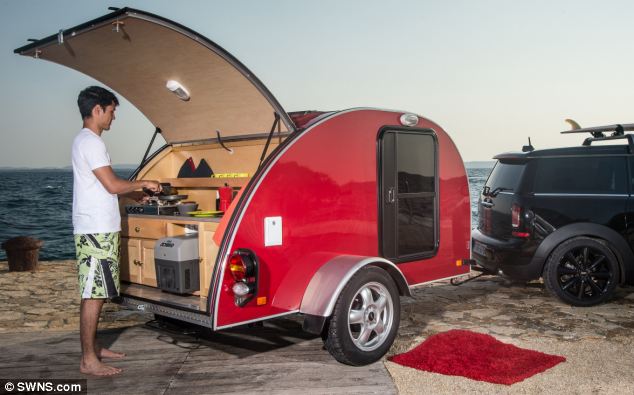 At 300kg, the Cowley it’s a lightweight entry into the small travel trailers category. It comes with a gas stove and an onboard water tank, as well as a kitchen sink and water pump. The solar panels keep a leisure battery charged, which in turn powers the TV and DVD player, as well as the onboard sound system. With added 240v electrics for keeping your laptop and camera charged, this is by far the most sensible and practical Mini Camper out of the three, and it also means that you can enjoy top road trips and those best van life travel spots with a loved one too! 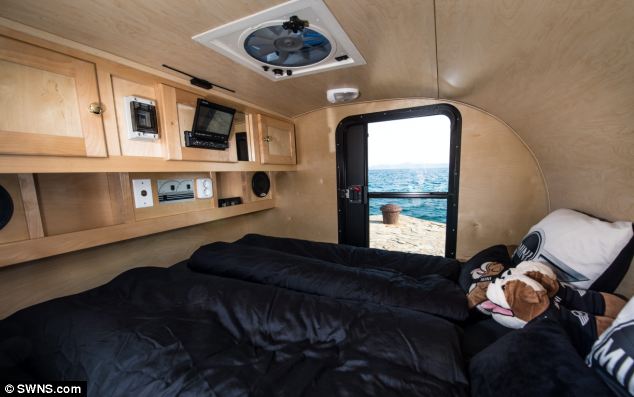 There you have it; three different camper designs for all of your off-grid needs. If you’ve read the full article and not just skipped to the end for the review, then it will be pretty apparent as to which one of these campers that I think is best. The Mini Camper Clubvan, while a great example of alternative living and minimalistic design, just doesn’t seem practical to me and would quickly become tiresome. The All4Camp earns more points for being a much more spacious option (and by not having a steering wheel as a cushion), but the Cowley Caravan easily takes the top prize as the best Mini Camper.

The annoying thing is that the Mini Clubman and the Cowley Caravan appear to be concept designs that haven’t actually come into fruition yet. The All4Camp was, at one point, just an April Fools joke that has since gone into production, so perhaps we might see the other campers on the streets before too long.

That doesn’t mean that you can’t build these same types of set up yourself though. You could learn how to build a campervan yourself and make your own Mini or buy something just as small as the Cowley Caravan like the Mink Tiny Trailer, which also has its own power and WiFi. Just because the ideas aren’t real doesn’t mean that you can’t have your own Mini Camper. Get creative and let us know your set up ideas over on our Facebook, Twitter, and Instagram pages!