Volkswagen bus camper fans around the world will be excited to know that a new electric Microbus has been revealed! Volkswagen is no stranger to the world of electric campervans, especially after that embarrassing incident with the emissions that no one likes to talk about anymore. But, credit where credit is due, the German automotive giants have stepped up to the plate and put a lot of time and effort into making their campers cleaner and their busses greener, with a whole host of electric vehicles driving off production lines over the past couple of years.

So far we’ve covered the futuristic VW Buzz with its Nintendo Switch style steering wheel and the Type 20 VW Electric Camper with its interesting ‘red-weed’ War of the Worlds’ inspired wing mirror mounts. They both have the elements and qualities that make a solid VW Camper Van, but if you’re looking for a trip down memory lane that won’t be ruined by an engine conking out just past the first corner, then this electric Microbus will be perfect for you. It’s called the ‘e-BULLI’, and it’s blown our unworthy minds! 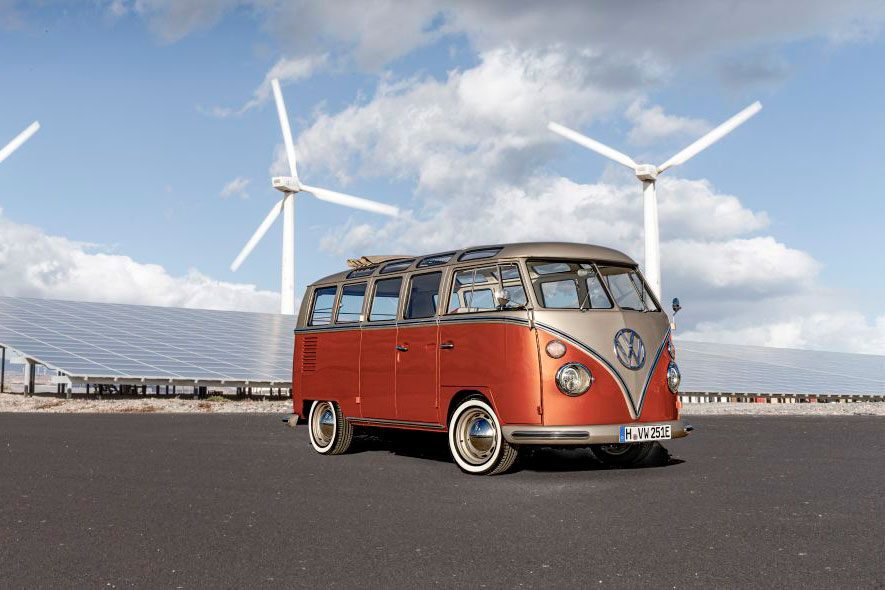 ‘E-BULLI’ might sound like someone who trolls people via email or an electronic version of that annoying bull from ‘Bullseye’ (a darts programme in the U.K where people could win a speedboat…don’t ask), but it’s a heck of a lot more than that. This is the entire history of the camper van rolled into one incredible looking vehicle with a much-needed modern twist, and we couldn’t be happier about its existence.

So where, why, and how was this electric Microbus made. The e-BULLI is currently a working prototype and is based around a T1 Samba bus that has been produced and revamped in Hannover, Germany. The old gubbins have been taken out, replacing the old four-cylinder engine with a brand-spanking-new 61kW electric motor. The camper can be charged by plugging in an adapter into a slot behind the number plate, giving you a slice of motoring nostalgia that is more reliable, greener, and cheaper to run. What’s not to love!

Give Us Some Stats! 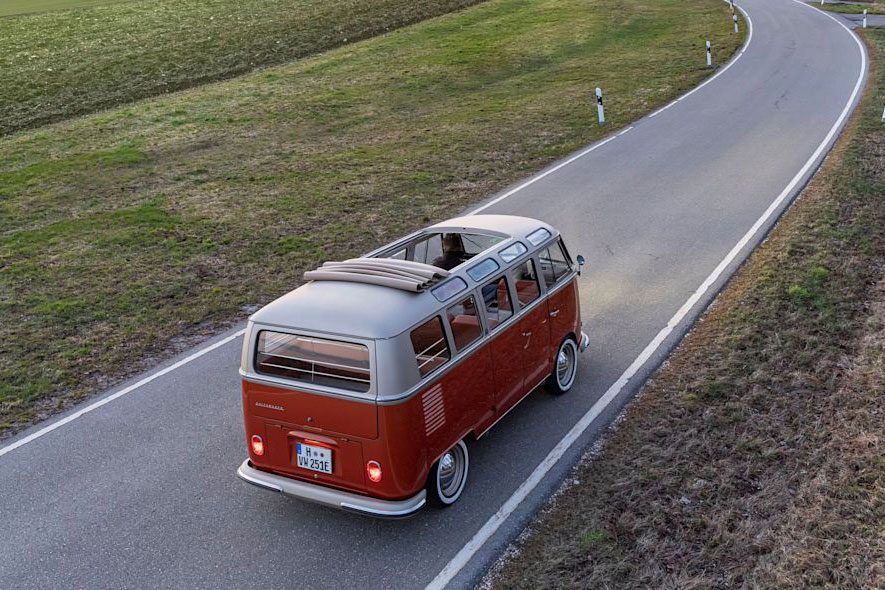 We all know that the original Microbus wasn’t known for being a wild speed freak (although we’ve seen modified ones hurtling around a track that would prove otherwise), but the e-Bulli electric Microbus has a top speed of around 80mph (that’s 130kmh for any European readers) and has two times the amount of torque as the original bus.

Now you might think that adding a huge battery into the mix is going to make this bus more of a monster camper than one of the world’s top eco campers, but the brainboxes over at VW have placed the battery in the very centre of the vehicle’s floor to improve manoeuvrability and to keep the centre of gravity as low as possible. Smart, right? 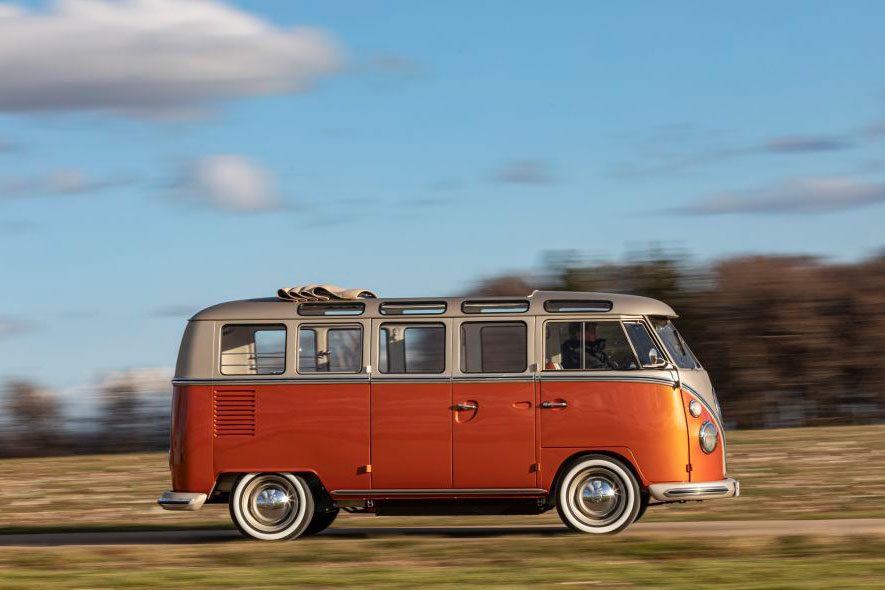 The outside has stayed true to the T1 Splitty style that we all know and love. The iconic dipping ‘V’ at the front, the original vents and wing mirrors, the same row of windows; it’s basically the exact same vehicle that you’ve dreamed of owning your entire life, except you won’t need to spend time queuing outside the petrol station to fuel it up. The LED headlamps should last a heck of a long time without you having to worry about changing them, and there’s a soft-top roof that you can pull back to let the air in on those hot summer days. 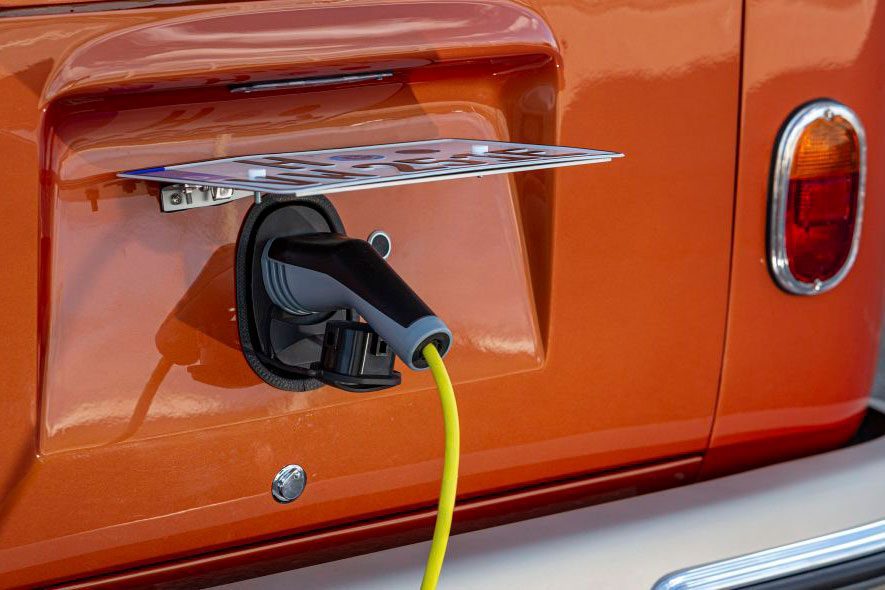 It’s understandable that you might not want a massive plug socket plonked onto the side of your electric microbus; the vehicle itself looks like a moving poster and keeping the design as close to the original as possible will have definitely been on VW’s mind during the planning stage. Having the charging area underneath the flip-up number plate is a genius move, allowing you to fit in with the purists while keeping your conscience clean about protecting the planet.

What’s On The Inside Of This Electric Microbus? 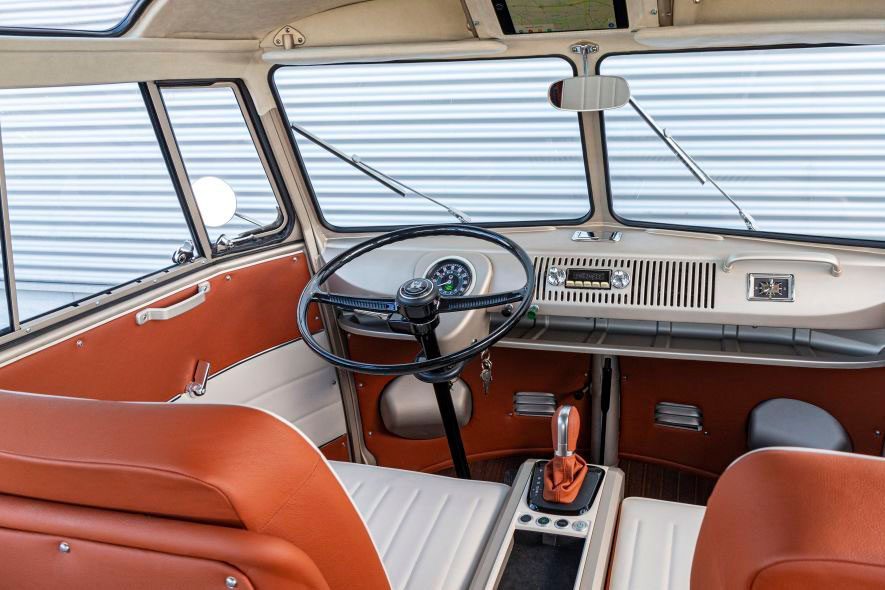 Renovated to perfection! The e-BULLI is a real blast from the past, though it has a few telltale signs that give its new digital nomad makeover away. Above the rear-view-mirror, you can just about see a tablet-style device that might be an on-board-display for the passengers or a satellite navigation system for the drivers. The manual gear stick also has all of the signs of a modern set-up too, but the steering wheel, seats, door cards, window latches, and floor have all been lovingly recreated in that classic Microbus style. 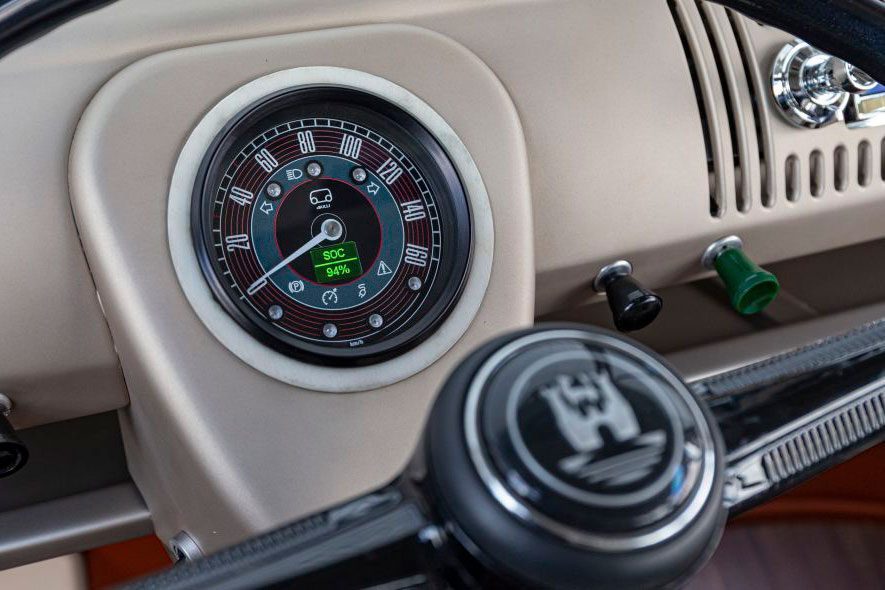 This electric Microbus captures that special vintage vibe that we love about this iconic series, with a retro dashboard and speedometer set up that will keep you informed about the status of your battery at every step of the way. The divers cab is set up in exactly the same way, and those seats look absolutely perfect. The bus also has LED charge indicators on the back of the vehicle like the ones that you might find on one of our best power banks or your wireless headphones, so you can watch in real-time as your favourite bus fills up with precious power juice. 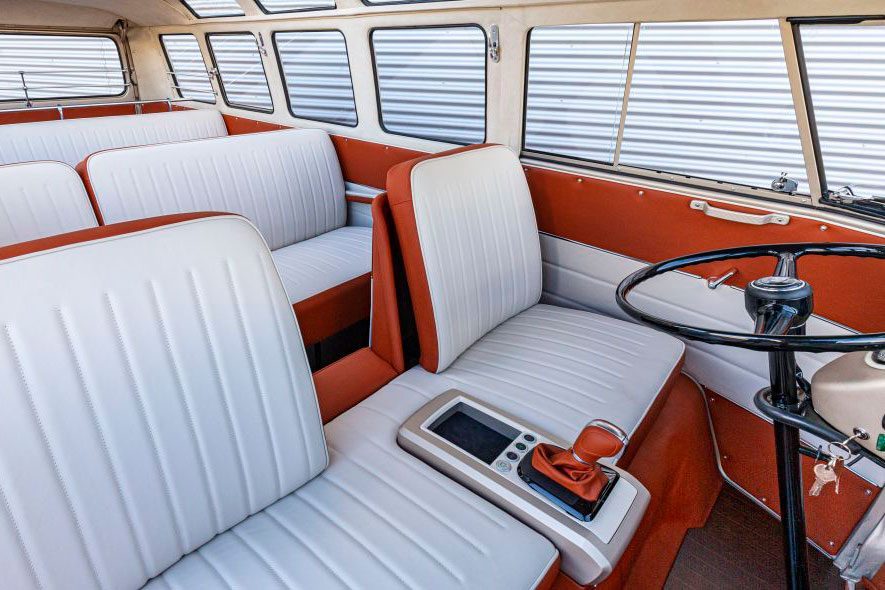 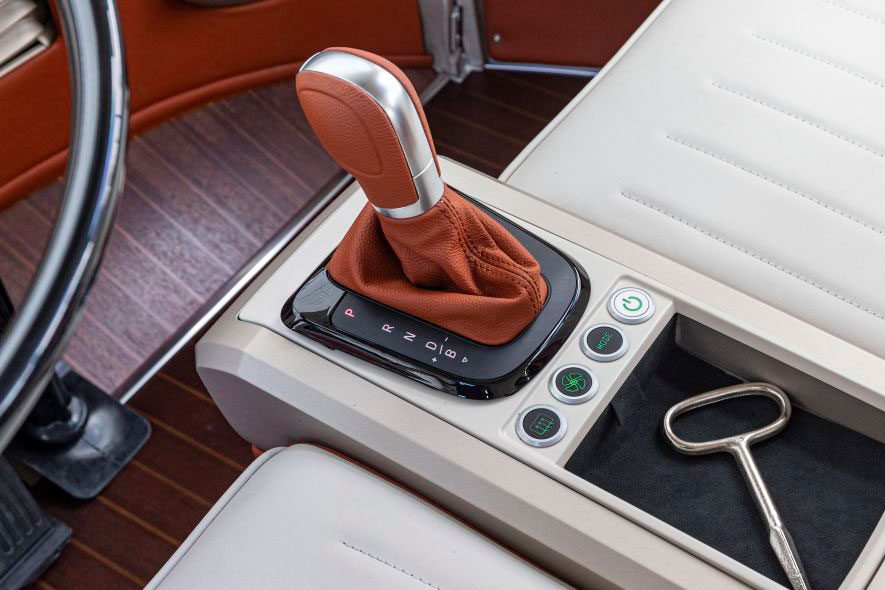 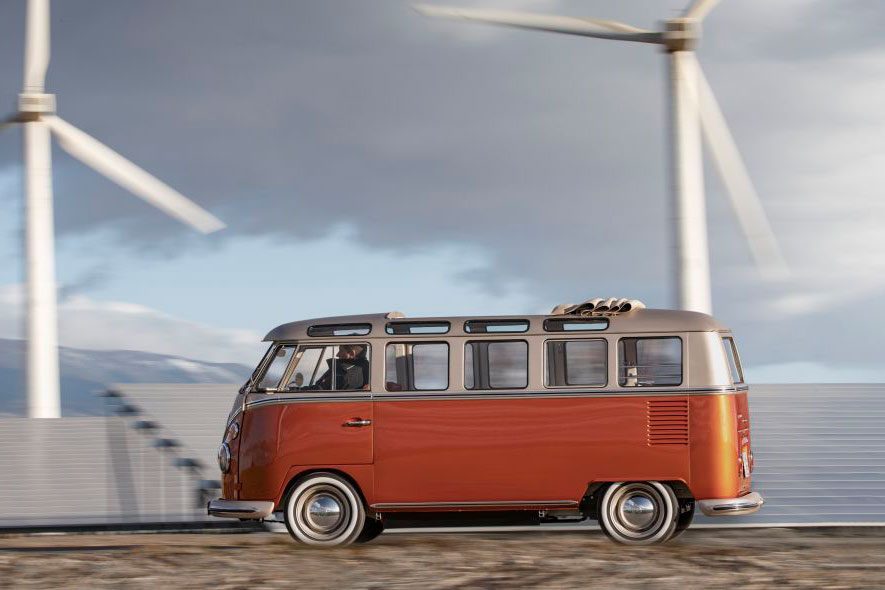 We’re still waiting on more information on the e-BULLI electric Microbus, as the initial launch has had to be postponed due to the coronavirus pandemic. We do know that prices for these Microbusses and campervan conversions will start from around $70,000, which is a small price to pay for such an iconic vehicle.

We are huge fans of the electric campervan movement, and this electric MIcrobus should hopefully help people to see that you don’t need a gas-guzzling off road bus to cruise around in style. VW are doing their bit to change people’s perceptions about electric vehicles, and we salute them for their efforts. We never thought that we would be in a position where we had THREE electric VW busses to choose from as our dream vehicle; talk about being spoilt for choice! The question that remains is which one would you choose if you had the money?