Nissan NV200 Camper – Everything You Need To Know

The camper van world is changing, but not in a way that you might have expected. If I asked you to describe some electric campervans for me, what would you come up with as an answer? Would you think about camper conversions that look dull and boring like a beige science experiment, or would you picture super-charged lightning trucks with the Flash logo on the side? Sadly most people tend to think about the first option and still have the opinion that diesel guzzling powerhouses make the best campers, and while some of our favourite off road trucks and luxury camper vans do fall into this category, new campers like the Nissan NV200 Camper are proving that diesel and petrol cars are becoming as fossilised as the fuels they use.

Does the thought of living the van life fill you with daydreams and keep you awake at night? Would you like to try your hand at being a weekend warrior and see some of the best van life travel spots in your free time? Head over to our Van Lifers and Weekend Warriors Facebook Group and join our ever-growing community of vandwellers around the globe. Speak to like-minded travellers about what van life costs you might incur, learn how to build a campervan, and share your favourite vanlife tips and van life essentials with other members!

The Nissan NV200 Camper has featured as one of our top eco campers in some of our earlier lists and has received a lot of attention over the camper van airwaves recently. In a time where concentrating on climate change and making a difference to our planet is more crucial than ever (and especially after the emissions scandal with a certain large automotive power still looming in everyones minds), electric campervans are needed now more than ever in a bid to help future van life generations keep the world a greener place. Let’s take a look at the Nissan NV200 Camper and get to grips with what this mean-green machine can do, and why everyone is so damn excited about it.

The Nissan NV200 Camper – The Camper Of The Future, Today

The Nissan NV200 is one of the most eco-friendly customisable vehicles on the market today, and it’s not a bad runner either. With a width of 1695mm and a length of 4400mm it’s a perfect small-sized camper for weekend trips while still being big enough to hold all of your personal belongings and essentials for a trip out into the wild. As a cargo van it’s perfectly suited for lugging around lots of heavy good and is spacious enough for even the hardiest of Tetris players to have a great time slotting beams and tools inside, making it a perfect conversion vehicle for anyone who likes to carry travel bikes and bulky off grid adventure gear around with them.

But what is it about these campers thats so appealing to vanlifers around Europe? Apart from the fact that it’s small enough to get in underneath most major height restrictions, the Nissan NV200 Camper is a nifty little stealth camper, blending into modern society without screaming ‘look over here, I’m a camper’ at everyone who passes by. It’s handy for weekend warriors who want a small vehicle that will fit on their driveway or in the garage behind the day-to-day work car, and it’s electric capabilities make it one of the top eco campers out there for tiny eco house lovers. Plus, most models include a rising roof to turn this little nipper into a pop top camper, giving you the ability to stand up while on the road. That’s a lot of stuff crammed into one little camper, don’t you think?

The Many Faces Of The Nissan NV200 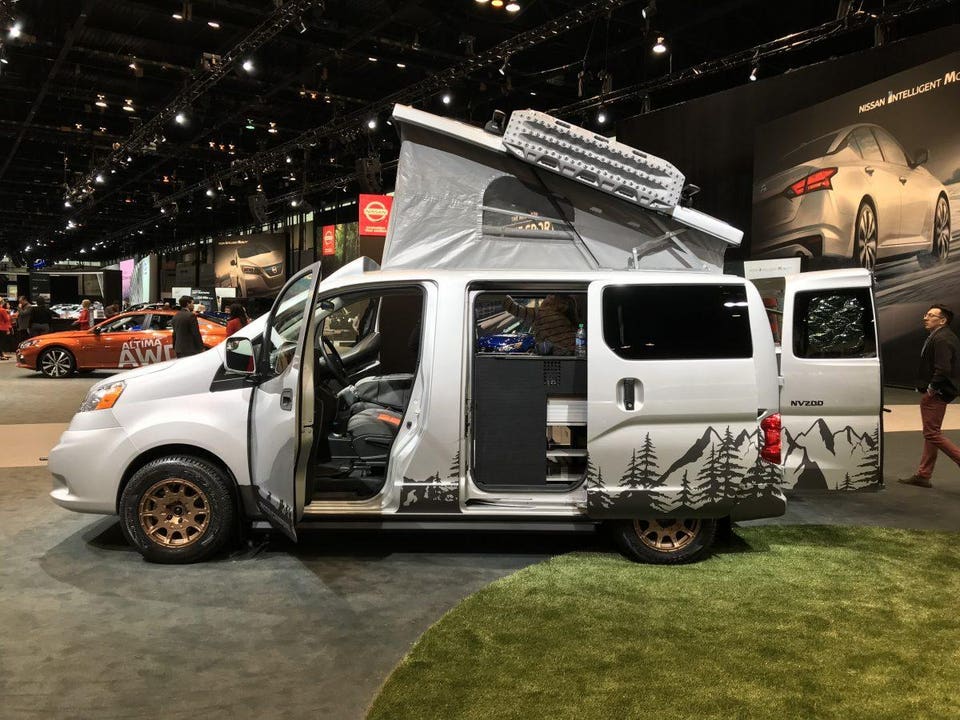 It’s no surprise that the Nissan NV200 is used as a based conversion vehicle by tonnes of camper conversion companies that specialise in converting micro campers and smaller modified campervan models. They separate themselves from each other by implemting colourful custom paint jobs and an array of different interior build styles, though most opt for including the same style of bed and kitchen set up due to the nature of the space.

One of the most famous Nissan NV200 Camper conversions that we’ve covered here on Van Clan has to be the Dalbury E campervan, the answer to how travelling in a van and living in a van can be eco-friendly for future generations of digital nomad travellers.

You’ve either been living under a rock, been watching too much Top Gear, or clearly haven’t read enough of our articles! The Dalbury E Electric is a Nissan NV200 Camper conversion from Dalbury Motors. If the Nissan NV200 were Clark Kent, then the Dalbury E Electric would undoubtedly be superman. The cool-water blue exterior and the inclusion of the make this one sleek-looking camper that you can easily spend time in while living off grid. It comes with a fold-down bed, a spacious kitchenette area with a 12V fridge and burner, a pull-out table, and seats for you and your family to relax on after a hard day on the trail. 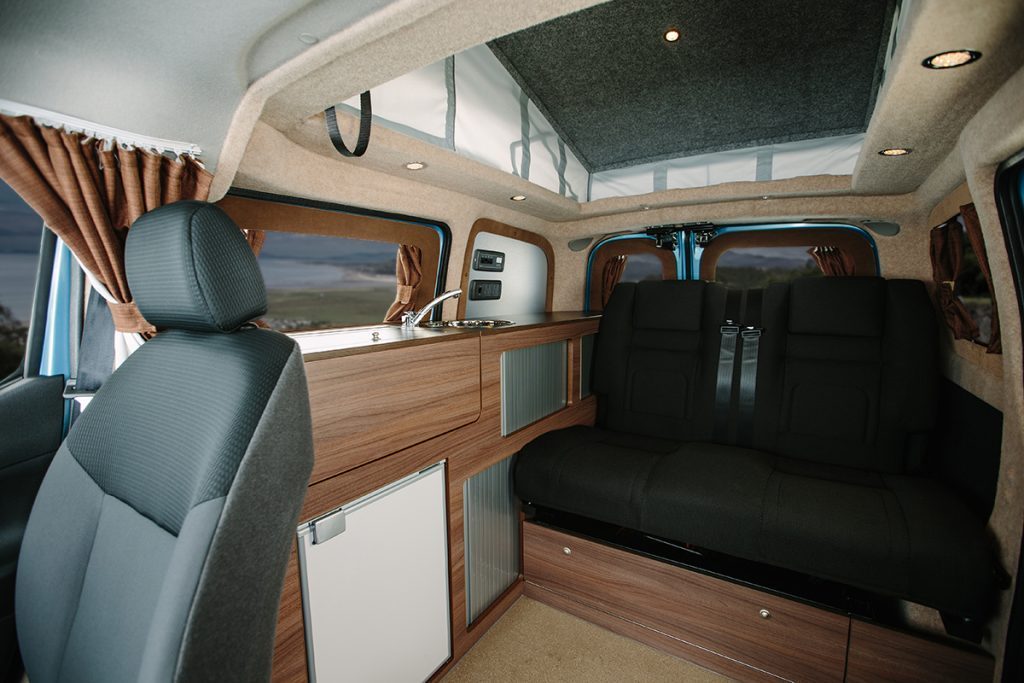 The best thing about the Dalbury E Electric is that (rather obviously from the title) it’s electric, which gives you the owner some great incentives for driving and also helps the wider world at the same time. You can get up to 80% charge on this thing in just 30 minutes, and British Gas will install a home charging set-up for you for the costly sum of £0. That’s right; for free. You don’t have to pay road tax, and there’s a running cost of 2p per mile. THIS is why vanlifers love this little beauty so much!

What About The Vehicle Itself?

Of course, if you don’t want to spend money on somebody else converting your van and you want to go for a more traditional log cabin tiny house feel, then you might want to consider buying the electric Nissan NV200 van outright and build a campervan yourself. The NV200 was originally designed to be a cargo vehicle, so it’s perfect for loading full of wood, screws, nails, water, gas – basically everything that you need to use to make the perfect rolling home. With a kerb weight of between 1248–1435 kg and payload of 750KG, you’ve got a lot of scope for decking out your future travel pad with bulkier items without having to worry about ever going over the limit. There’s a total of 4.2 cubic metres in the back for you to play around with; you could fit two Euro pallets in the bac very easily with room to spare!

If you’re looking at this and thinking that you’ve already spent oodles of time looking at the top Mercedes Sprinter Conversions and are not sure whether a small camper is for you, then just consider some of these facts. Nissan a worldwide brand and parts are just as readily available as Sprinter or Fiat parts, so you won’t need to worry about picking up spares while out on your travels. The Nissan NV200 Camper is much easier to park than a monster camper like the EarthRoamer too, and because it’s electric, you can drive it in eco-friendly areas all across Europe and wave at the diesel van owners who are stuck by the roadside looking confused at their maps.

What’s The Nissan NV200 Camper Like Out On The Road? 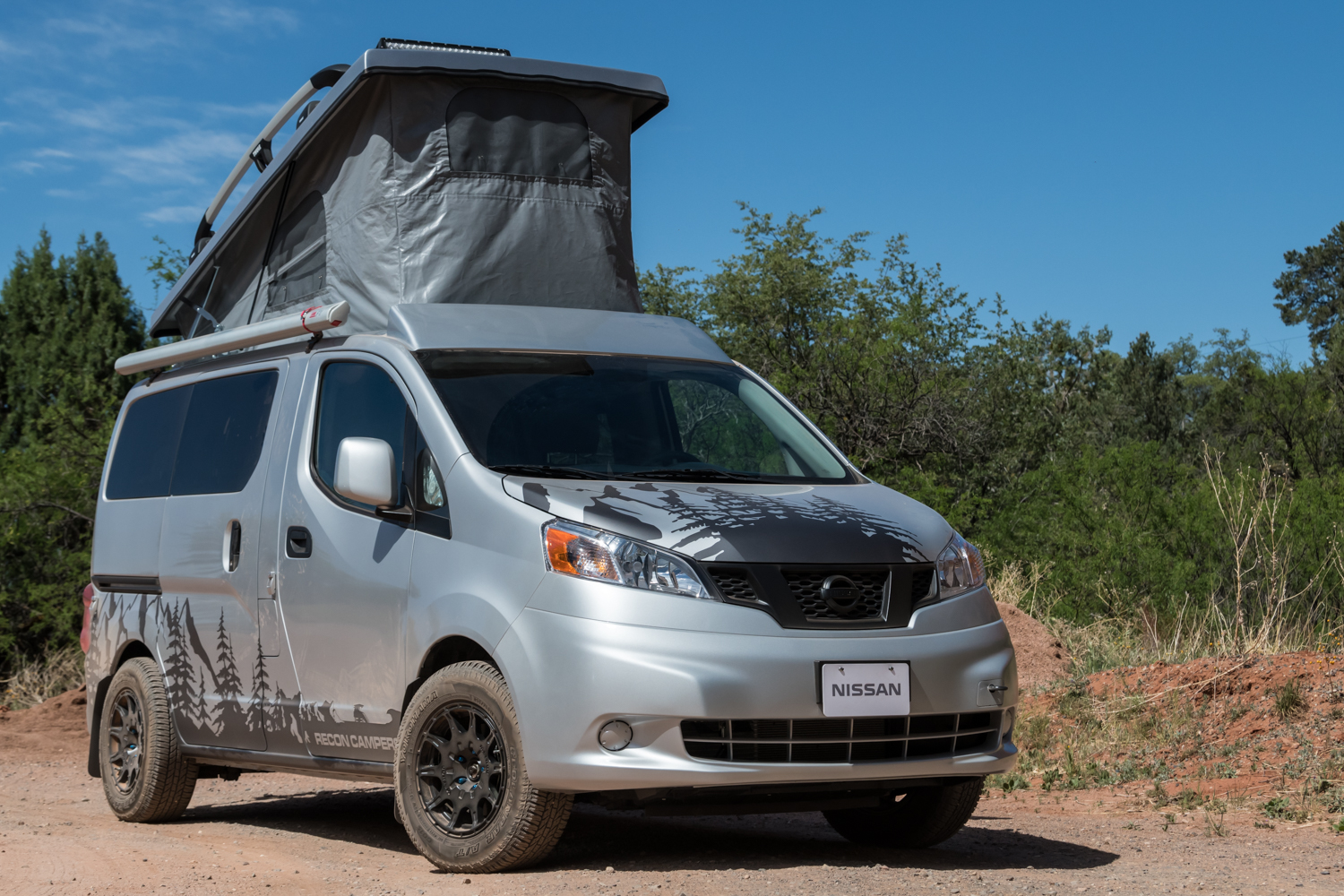 I love driving a van as I’m usually higher up than anyone else on the road (unless they’re in an articulate lorry that is). The Nissan NV200 Camper has a nice drive position and a wide-open view of the road ahead through the front and side windows. The passenger seats look nice and comfy for those long drives along the motorway, and every NV200 comes with Bluetooth hands-free mobile technology to keep you safe while you’re driving.

In terms of whether you could live in one of these vans for a long time on the road, it really depends on the style of conversion that you end up going for. The Dalbury E Electric is more than kitted out for off grid living, with ample battery and water storage for any trips into the depths of the wilderness. The fact that this is an electric camper means that you should probably make a note on your nearest charging points wherever you end up parking, but with eco-friendly vehicles becoming more and more popular as the years go by there shouldn’t be a problem in keeping your travelling home topped up with tasty juice.

Is The NV200 Well Suited To Being A Camper?

As long as you have a pop-top either pre-installed by a company or you book in to get one fixed on by either a conversion expert or your DIY savvy friend, then I think the Nissan NV200 makes a very good camper indeed. Small campers are generally cheaper to run than bigger ones, but nothing can beat a running cost of 2p per mile! It’s sturdy, well built, and can store more things in the cab area alone than the Tardis, making it a perfect vehicle if you have lots of children’s books or toys that you need for keeping little ones entertained. In all honesty, I don’t think it’s a camper that you could live in full time, but the beauty of the Nissan NV200 Camper is that it sells itself perfectly as a day/long weekend vehicle. Charge up at home, plan your route on a Thursday night, and then head out on Friday as soon as the clock hits 5.30pm. If I had a microvan like the Dalbury E Electric, I’d keep it stocked up with spare pots and pans, dried food and clothes all year round, just in case the feeling of adventure struck me. And while the Nissan NV200 Camper isn’t a 4WD off-grid monster, it’s small enough and speedy enough to make it to a lot of places that your hefty Winnebago’s or bulky panel vans might not be able to reach. Steep hills and secluded spots are nothing to a speedy mini camper, and the Nissan NV200 has everything you need all in one tiny package.