Toyota Truck Camper Conversions That Are Built For The Apocalypse

Off road trucks need to look the part, and if there’s one vehicle that we know can pack a serious punch, it’s a Toyota Truck Camper. They are the workhorses of the truck life world, built for the gnarliest off grid adventure and any crazy expeditions that you might have planned to the far reaches of the globe. I’ve had the pleasure of taking a Toyota Tacoma Camper around the United States a few times now, and there’s no place that little baby can’t go! But today, we’re going to take a look at something a little bigger than my trusty little Tacoma, a Toyota Truck Camper (two in fact!), that could give the all-powerful Adventure Truck a run for its money.

If you’re looking for a pop up truck camper that could double as a mobile command centre should a zombie apocalypse happen, then we have just the answer – these Toyota maltexplorer Conversions from ‘maltec‘, a German-based company that has recently branched out into the U.S. If you live life in the fast lane and prefer dirt bikes to travel bikes, then the name ‘Malte Asmus’ might mean something to you. He’s a world Motocross Champion and the founder of maltec, and if his career is anything to go by, then these Toyota Truck Camper models are going to be tougher and ballsier than Superman on steroids.

The Mighty Maltec Are Redefining The Toyota Truck Camper 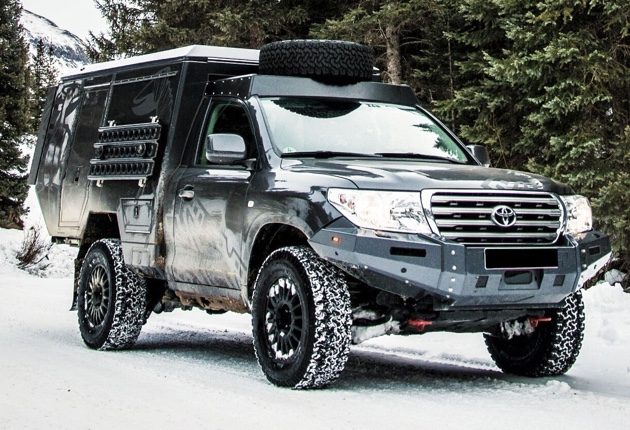 Just take a minute to look at these maltec motoring Minotaurs! These pop up campers make me want to drive into the wilderness with nothing but a Rhino Ready best survival kit and a Rambo headscarf (although I’d need 4G to upload my articles…why do I have to be such a Millennial).

Let’s give you a little bit more information about maltec and their maltexplorer Conversions before we move onto the campers themselves. The company pride themselves on making off-road rigs that can get you wherever you need to go safely and reliably, even if that means driving down the side of a mountain or taking a quick detour through a raging river to get there.

They do this by focusing their skills on one of the strongest, most durable, and hard-wearing off-road trucks of all time – the Toyota Landcruiser. Each truck goes through a major upgrade both inside and out, with all of the best van life essentials from functional living spaces to upgraded suspension and drive train. There ain’t anywhere on earth that these beasts can’t get you to (except maybe Vanuatu, but I’m sure you could give it a good go). 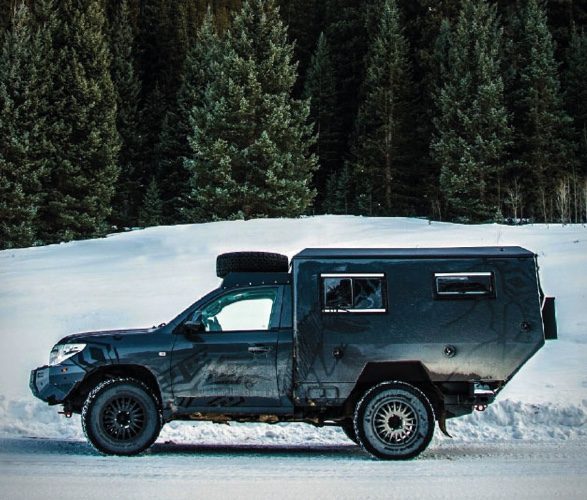 The team at maltec has found the right balance of comfort and luxury combined with an all-out adrenaline-pumping ride, and their campers are designed with long-range capabilities to keep you out in the wilderness where you belong instead of constantly having to come back to the city to stock up on fuel, water, and gas. If you’re reading this in March 2020 during the Covid-19 outbreak and live in your camper full time like me, then you’re probably wishing right about now that you had one of these as a second vehicle.

Every maltexplorer conversion has a special chassis designed to protect your vehicle wherever you roam, and extra fuel tanks and water reservoirs so you don’t have to plan your route alongside the service stations on Park4Night. They are the perfect choice for the digital nomad who knows no bounds and adventurers who thrive off living through harsh conditions; if you fit into that bill, then keep on reading.

Show Us Some Stats 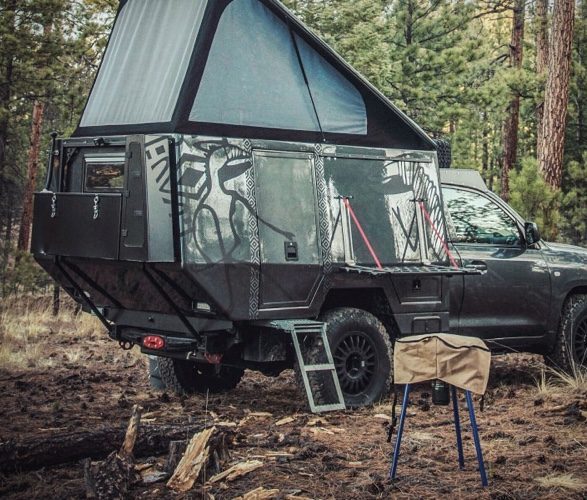 Let’s start with the ‘maltexplorer Toyota Pathenger’. Built on a Land Cruiser Series 200, this camper has the same kind of elevated pop-top as the ever-popular Earthcruiser GZL 300, giving all of the tall vandwellers out there plenty of space to stand up while whipping up meals or washing. The outside of the carbon-fibre cabin looks tough as nails and we’re big fans of the quirky decals on the sides. You can enter the cabin through the side of the camper via fold-down steps that give access into the living area. There’s a flip-down table for cooking outdoors, and that pop-top is perfect for letting light and air into your travelling tiny home.

The Pathenger Toyota Truck Camper comes with Eibach springs and a suspension system with remote reservoir shocks. If you’ve read our other articles about off road truck camping, then you’ll know that those are serious bits of kit and essential upgrades for anyone who’s thinking about ploughing their way through the unknown. Complete with BFGoodrich tyres, a Kevlar rope winch (who’s driving this thing, Batman?) and an underbody protection plate, you can be sure that whatever obstacles you’re faced with, the Pathenger can cope with them (or just destroy them).

It’s pretty obvious that these beasts can be used all year round, and the stats for the two vehicles that we’re checking out prove as much. The Pathenger comes with a 110 amp-hour AGM battery system that can be charged up via a split charge relay system or through a campsite hook up, so there’s no need to worry about electric reserves even when the sun is making a no-show. There’s a 2000 watt inverter for when you need to charge your drones, phones, gadgets, and tech, and the electrical system can be controlled via a touchscreen monitor. 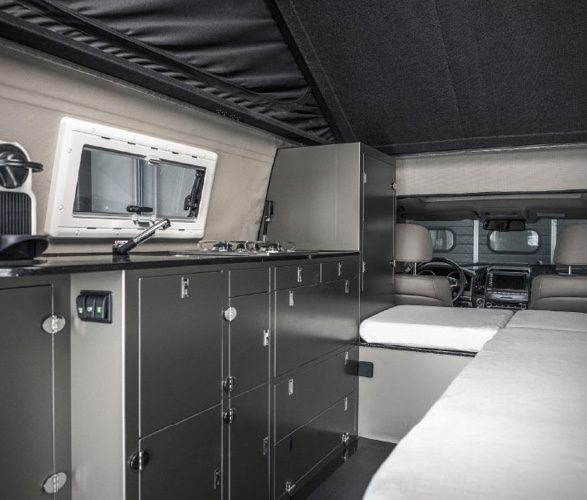 Inside the camper, you’ll find a 14-gallon water tank and a 12-volt pressure pump – no foot pumping necessary in this off grid camper! There’s also a 4-gallon water heater for washing up dishes in arctic temperatures or washing yourself in the middle of the jungle. Who said living off grid meant that you had to be dirty!

The interior of this Pathenger Toyota Truck Camper isn’t exactly what you would call homely, but it is efficient. If you’re well known for dragging more mud into your house than what is actually left on the trail, then this easy-clean living space will be right up your street. There’s plenty of storage for all of your camping gear and any van life gifts that you might have whittled up on the road, and the Pathenger comes with all of the cutlery, plates, glasses, and other top cooking accessories that you might possibly need for your first venture into the wild. Not bad, ey? You’ll also have access to two sleeping compartments, which although aren’t very roomy should provide a comfortable nights sleep; a neat kitchenette area that comes with a sink, a spacious refrigerator, and a two-hob burner for whipping up meals on the go. 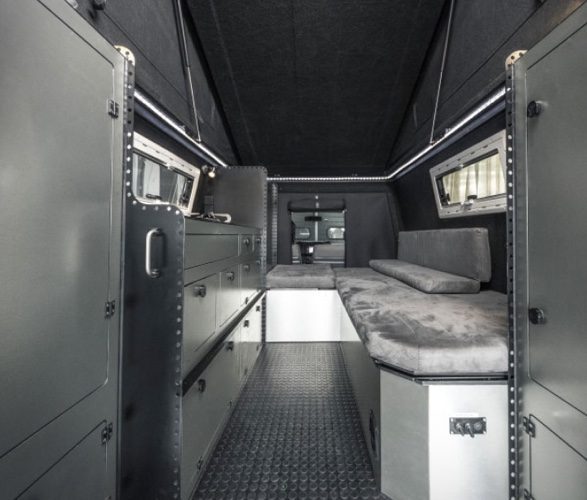 Tell us about The Second Toyota Truck Camper Already! 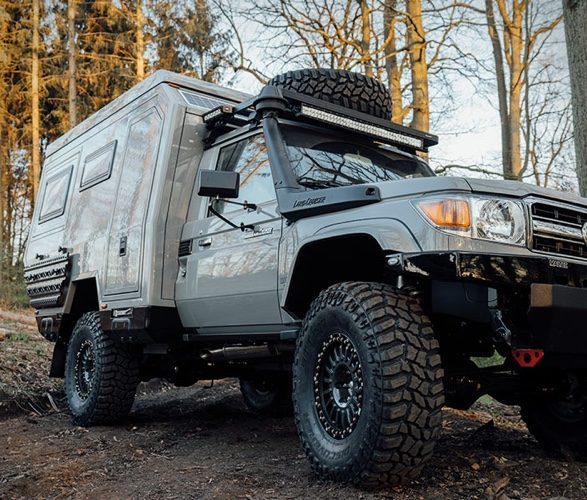 We were just coming to that! The Series 7 extended wheelbase Toyota Truck Camper has all of the above and more, and in my opinion is the camper that you want to be considering purchasing if you’re serious about Full Time Van Life and want to be as self-sufficient as possible. 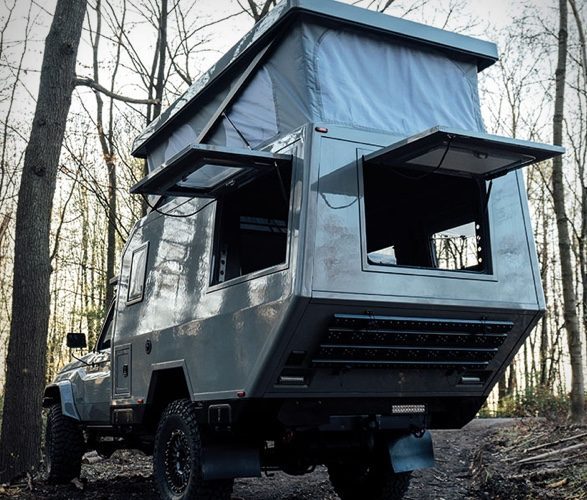 This maltexplorer Toyota comes with a 150-watt solar panel, keeping you charged up without having to sit with the engine on and ruining your stealth camper van vibe. The pop-top in this conversion is more akin to the style used by Four Wheel Campers, giving you an increased roof height all the way along the camper and not just at one end. It features privacy screens and mosquito nets, and the cross-draught that you can create through these types of roofs-vent windows are super useful when camping in hotter climates.

Let’s take a look underneath the Series 7. Anyone looking to grab one of these for a trip into the wild will be able to take advantage of powerful front disc brakes, Cooper off-road tyres, aluminium skid plate protection, and a custom powder-coated bumper. Not only will you be able to drive like an off-road god, but you’ll also look the part too.

As you might expect, the storage capacities in the Series 7 have been increased significantly; 26.5 gallons of fresh water, 10 gallons of greywater storage, but the same 4-gallon water heater powered by the engine. This conversion comes with a flip-over sleeping bunk inside the main cabin and also boasts a wet room with an indoor shower and toilet. If I were heading to a place with harsh climates, then I would feel much more at home showering inside than out in the middle of a torrential storm. One other thing that sets this Toyota Truck Camper apart is the fact that it comes with a diesel furnace; there’s nothing worse than being cold while out travelling, so take advantage of those extra fuel tanks and warm yourself up!

Both of these Toyota Truck Camper models are perfect for taking on the adventure of a lifetime, and they both have their own unique differences. Apart from having an awesome name, the Pathenger is built for fast-paced exploration, ducking and diving down forest paths and dragging friends out of the mud when they’ve strayed too far. The available stats and the body upgrades make me think that this conversion would be perfect for those carefree vanlifers who like to take the extra risk, all while knowing that both they and their vehicle are safe and sound throughout their excursion.

The maltexplorer Series 7 Toyota Truck Camper is just as gnarly and has more features designed to keep you off-grid. I prefer the fully-raised pop-top roof as I’m pretty tall myself, and I would definitely appreciate those bigger water tanks and the indoor toilet set up. For me, this is a camper that you might upgrade to if you’re considering off grid living on a long term scale, whereas the Pathenger might be more suited to a weekend warrior who loves to conquer the great outdoors once the clock hits 5 on a Friday night.

The maltec team have converted five of the best Land Cruiser’s available, and the other three maltexplorer conversions that we haven’t covered can be found over on the maltec website. Take a look, and let us know which Toyota Truck Camper you would choose over on our Facebook, Twitter, and Instagram channels!!