Van life is constantly evolving and, as with any trend, sport, or movement, people are continuously pushing the boundaries of the lifestyle and seeking more freedom, more excitement, and more adventure. Vanlifers are all unique, each having his or her own reason as to why they have chosen to join this alternative living movement. But once they have bought their camper van or converted their vehicle of choice, a pattern emerges that is much easier for prestigious van life scientists such as ourselves to observe (yeah I know, that last sentence surprised me too). You see, vandwellers usually fall into two categories; the ones that like to play it safe while out on the road, and the ones who don’t consider it a good trip unless they have to use their MaxxTraxx to get out of rivers, bogs, and sand along the way. We’re talking of course about the legendary Overlanders, a hardy group of adventure lovers that may well get a little hot under the collar when they take a look at this brand new Peugeot Boxer Camper.

Are you hungry to give full time van life a try? Do you wish you could spice up your weekends with a trip out in a tiny travel trailer? Head over to our Van Lifers and Weekend Warriors Facebook Group and join our evergrowing community of tiny home enthusiasts all over the world! Pass on vanlife tips that you have picked up on the road, share easy campervan recipes and the top cooking accessories that you use on the go, and compare the best van life travel spots that you’ve visited on your adventures!

Now, I know what you’re thinking; a ‘Peugeot Boxer Camper’ with 4×4 capabilities? If we were talking about some of the top off-road Mercedes Sprinter Conversions or maybe a new offering from Four Wheel Campers, then perhaps it might be harder to believe. But Peugeot? Well, fasten your seatbelts and prepare to be amazed, because this new offering from the French motoring giants looks as though it lives up to its name and more besides, providing space, comfort, and style for all of our fans of off road trucks that live life on the wild side. Let’s take a look in greater detail and check it out!

The Peugeot Boxer Camper – A 4×4 Marvel, Or Another Camper Destined For The Ditch? 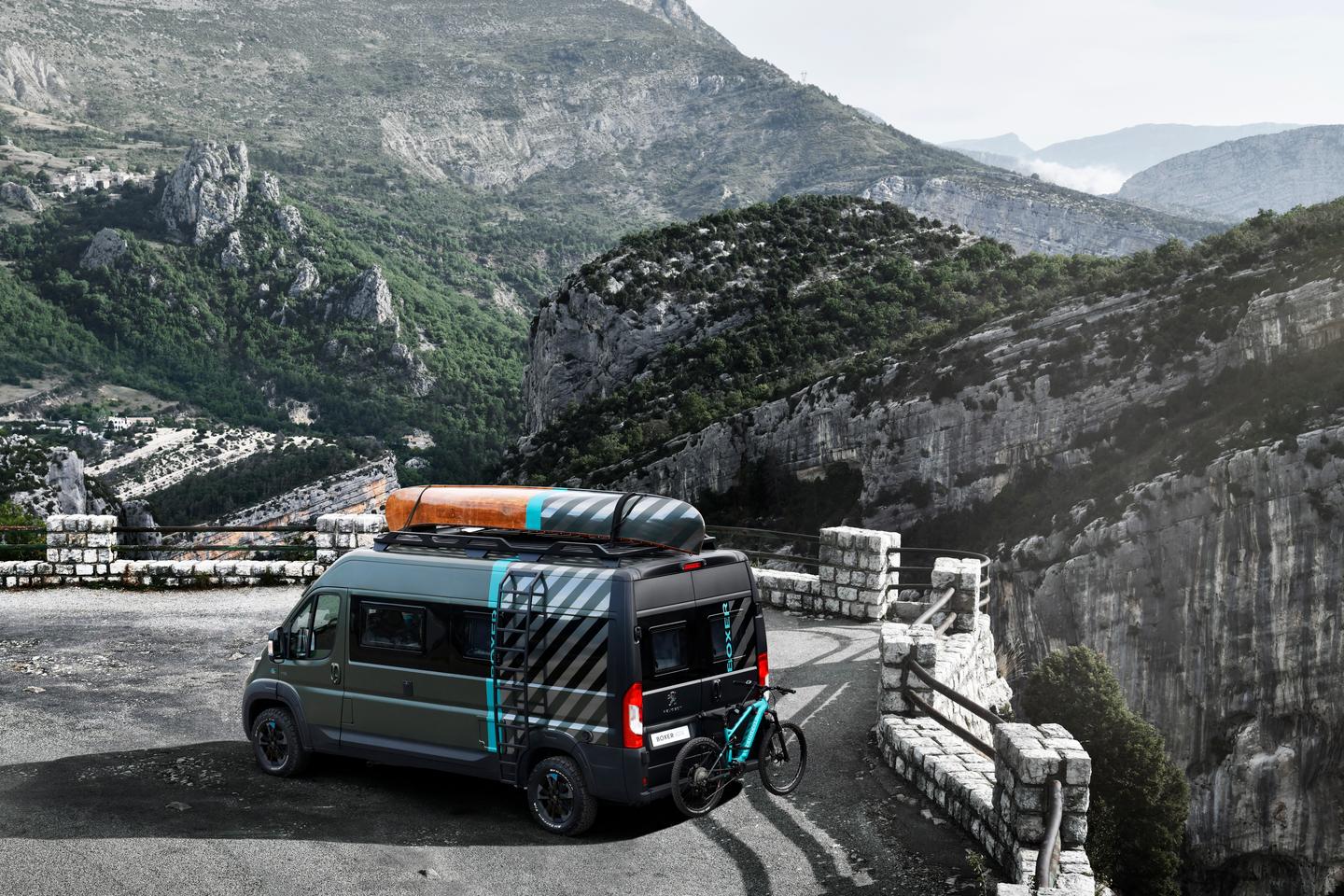 If looks alone could sell a camper (let’s be honest, sometimes they do), then we’d be sold on this Peugeot Boxer Camper. This thing appears to be the business, with custom decals, a stylish colour theme, and lots of hidden toys and gadgets that would make even the most sceptical travellers a little excited. Before I get too into the what, where, and why of this camper, I just want to give you a little insight into how this Peugeot Boxer Camper came to be. This won’t take long, and who doesn’t love a good fact-explosion every now and again!

After the success of the mighty mini camper that Peugeot produced back in 2018, the Rifter 4×4, Peugeot decided to scale up to making a larger overlanding vehicle with gear haulier capabilities and the lift and power needed to make a truly impressive off-road vehicle for any scenario. If the Rifter was designed as a weekend warrior camper for the mildly curious adventurer in search of hidden valleys and glades, then the Peugeot Boxer Camper is set to be the attacking force that claims those lands as it’s own and declares itself the rightful ruler. Got the analogy? Good, let’s carry on. 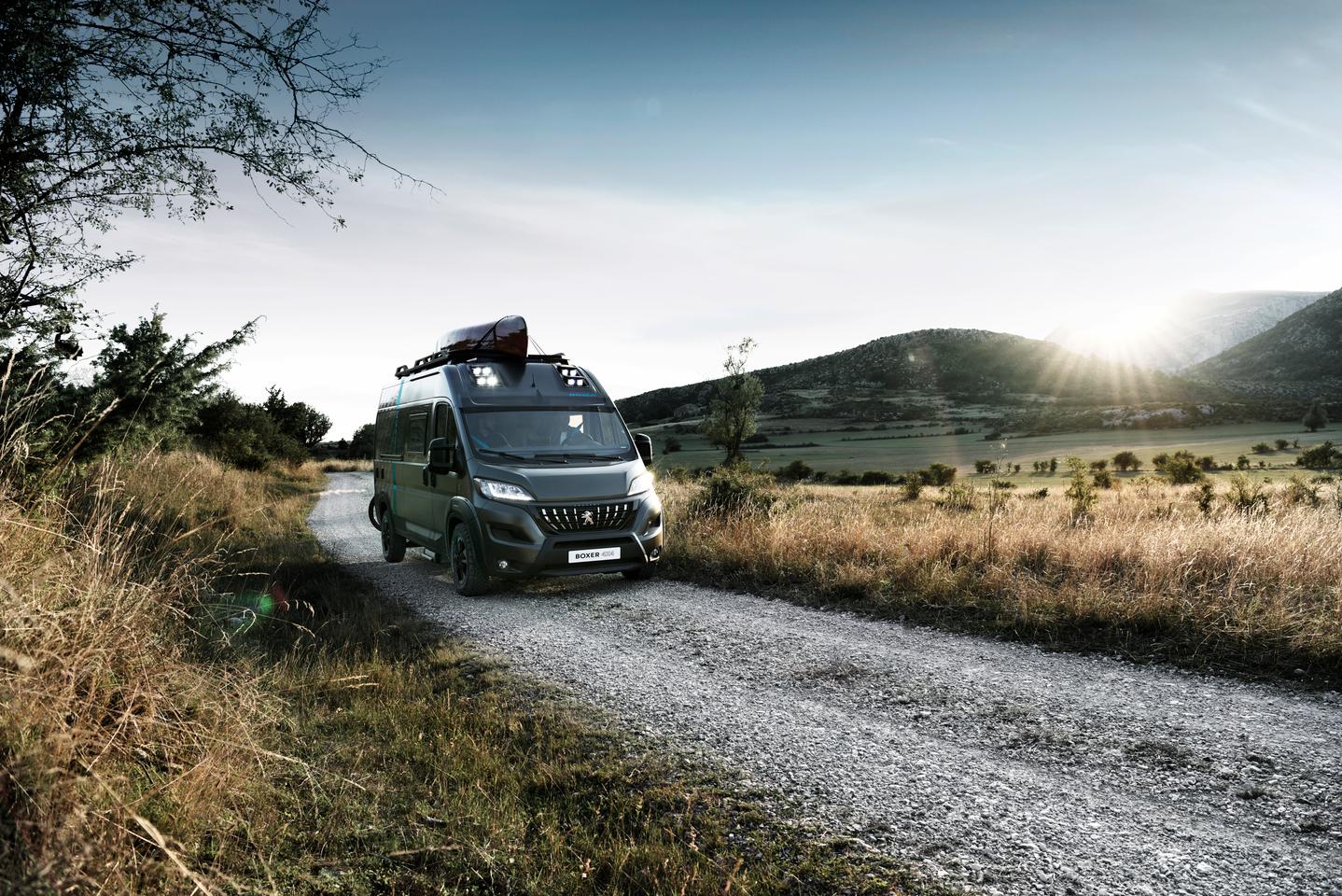 The Peugeot Boxer Camper has some of the same features as the Rifter 4×4 such as BFGoodrich all-terrain tires and a Dangel 4×4 with rear differential locker. It’s been lifted up 2 inches at the back of the camper and 1.2 inches at the front to make passing over rocks, fallen tree trunks, and small undiscovered mountains much easier while out on the trail. The increased lift will certainly tick some boxes overland adventure enthusiasts, but it’s the other elements on the outside of the camper that impress me the most. 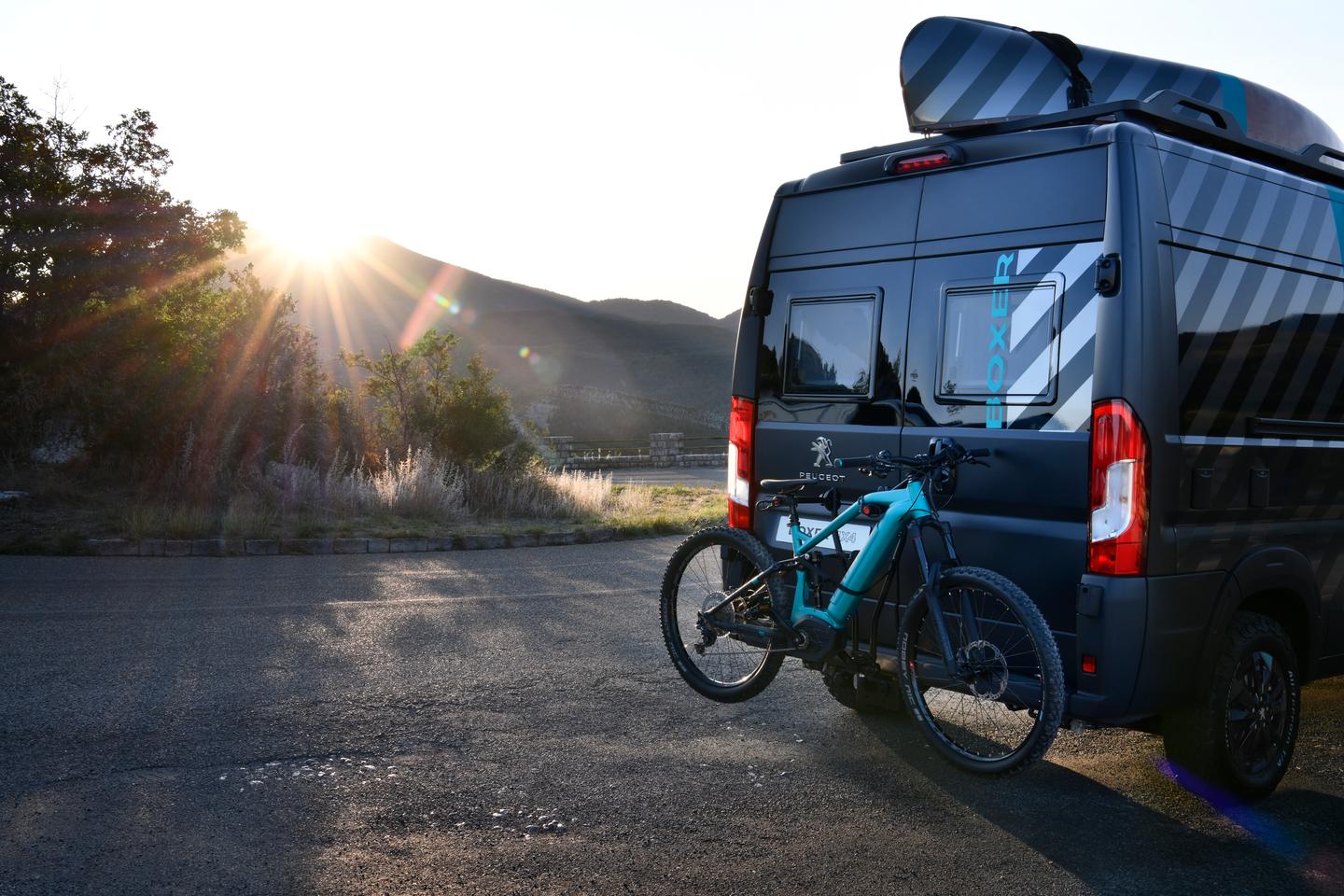 I’ve been living in a van for the past two years now, and my camper conversion is just a plain old white van with nothing exciting going on with regards to the paintwork. Take a look at the decals and paint job on this Peugeot Boxer Camper; it’s a digital nomad campers dream come true! The mint-green colour used in the Peugeot Boxer font is a key feature that is used throughout the exterior and is used to give Peugeot’s own eM02 FS Powertube electric mountain bike a splash of colour that will set it apart from other travel bikes out on the trail. 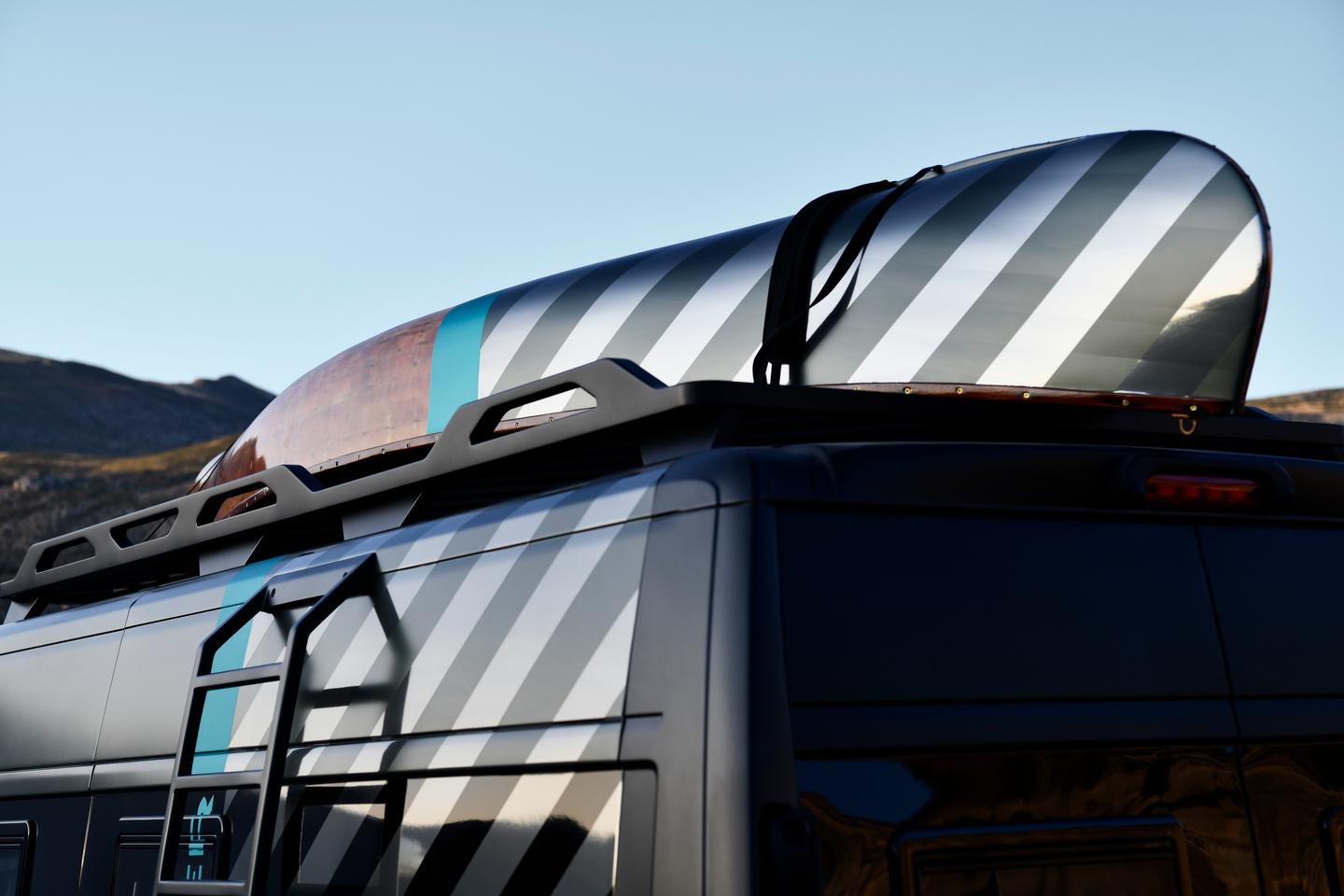 The superb attention to detail from the French automotive company carries on up onto the walnut canoe on the roof too. Just check out the precision of that green line and the silver diagonal stripes matching on both the van and the canoe; it’s seriously cool stuff that makes this camper appear as a solid contender to the other adventure bus brands on the market today. With the van, the bike, and the canoe put together, there’s no telling where your adventures might take you. 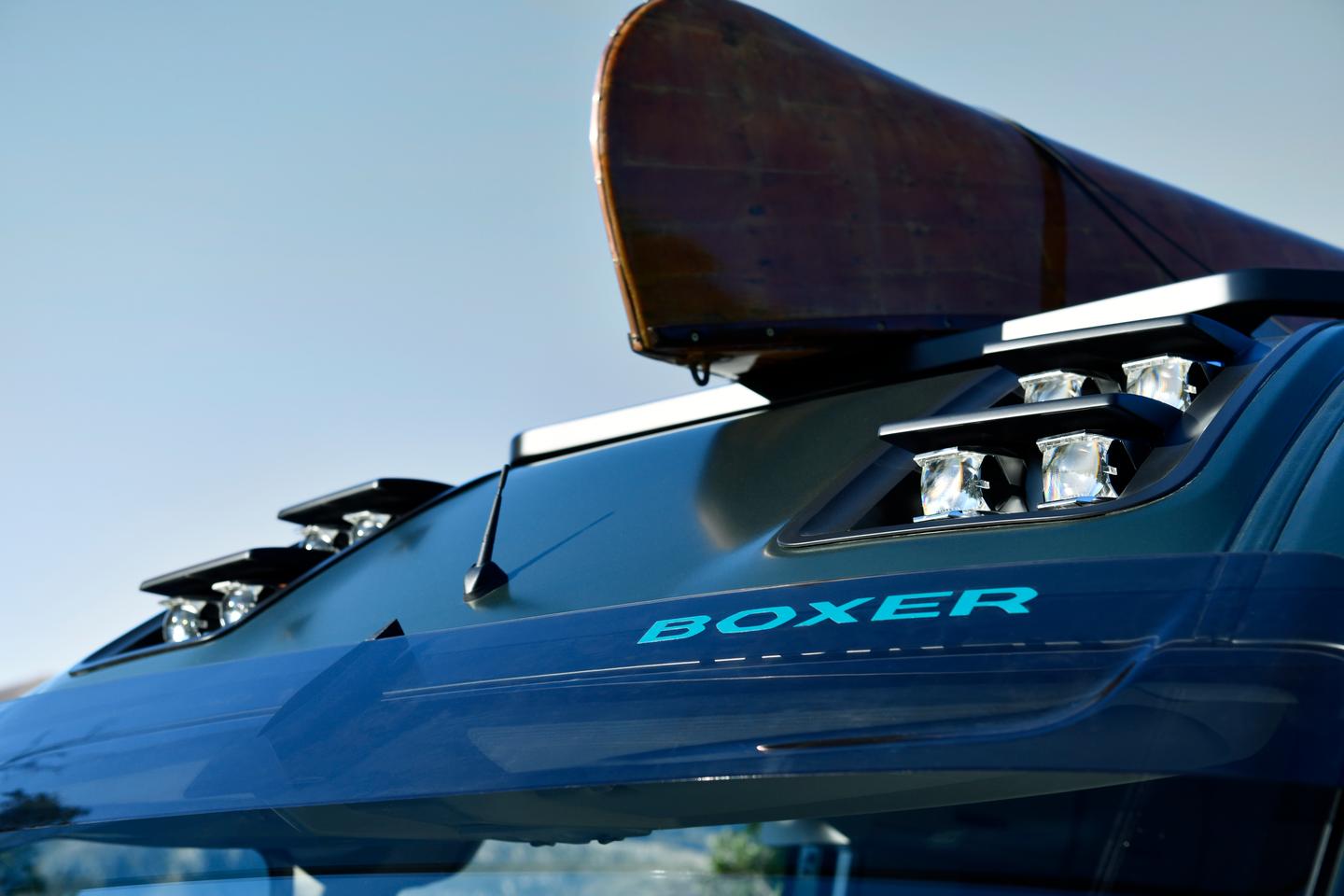 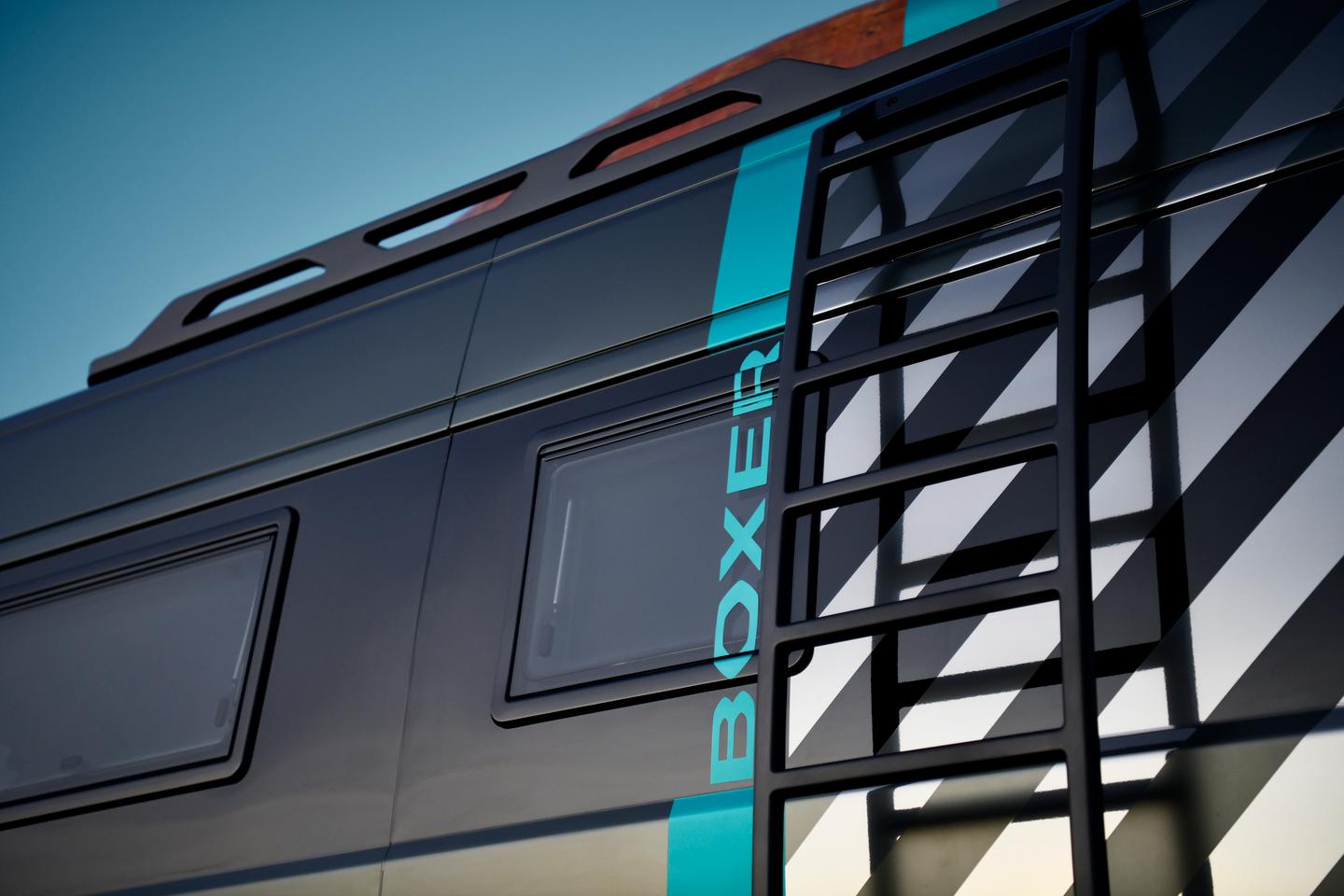 The roof of this Peugeot Boxer Camper can be accessed by a mat-black ladder that matches the sturdy-looking roof rack, a great place for any bulky outdoor adventure gear you might want to store or a handy drying place for your StandOut Sport wetsuits and walking gear. We’ve also spotted some pretty gnarly looking exterior lights on the top of the camper too that would be perfect for lighting up any dark park-up spots or shadowy forest trails. They sit behind flap up panels and look a little bit like the crystals that you might find in a Legend Of Zelda game (which instantly gets points from me).

What’s On The Inside? 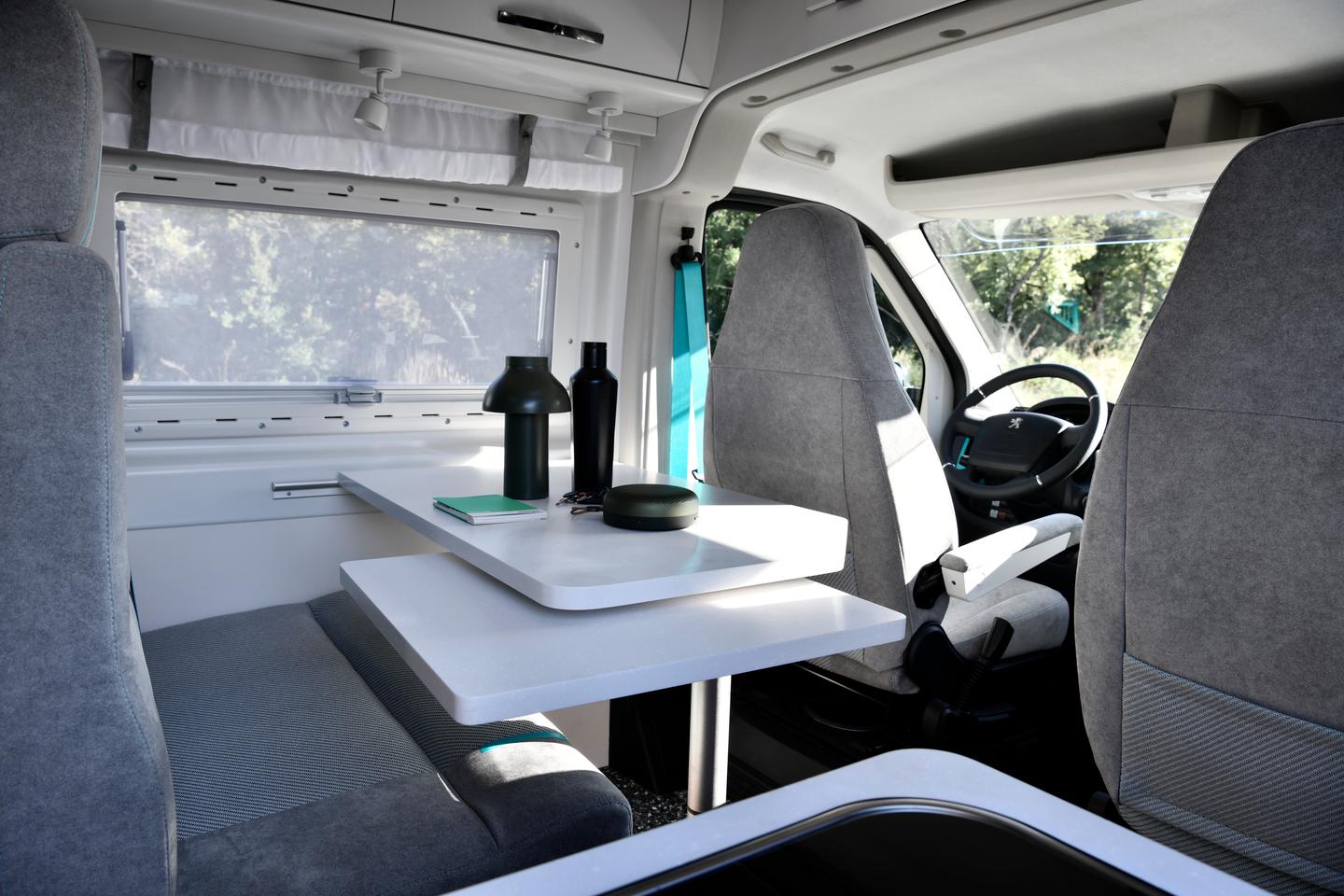 The inside of this Peugeot Boxer Camper is a little bit elusive in the fact that we haven’t found many pictures that show off the interior. What we can see from the picture above is that the living area is white and very clean looking, which can either be interpreted as looking fresh and functional or bland and devoid of character. We’re hoping that it isn’t the second one and that Peugeot haven’t spent much more time on the outside of the vehicle than the inside. We do know that the build uses overhead storage cupboards, has an electrical system onboard that powers the spotlights, and that the windows can be both opened and then closed off via the included privacy blinds. The extending table would suggest that the captains chair seats in the front of this Peugeot Boxer Camper can swing around, making a communal dining area, and we can guess that this camper sleeps three people, making it a contender for the best camper van for family outings (as long as your family is small, that is). 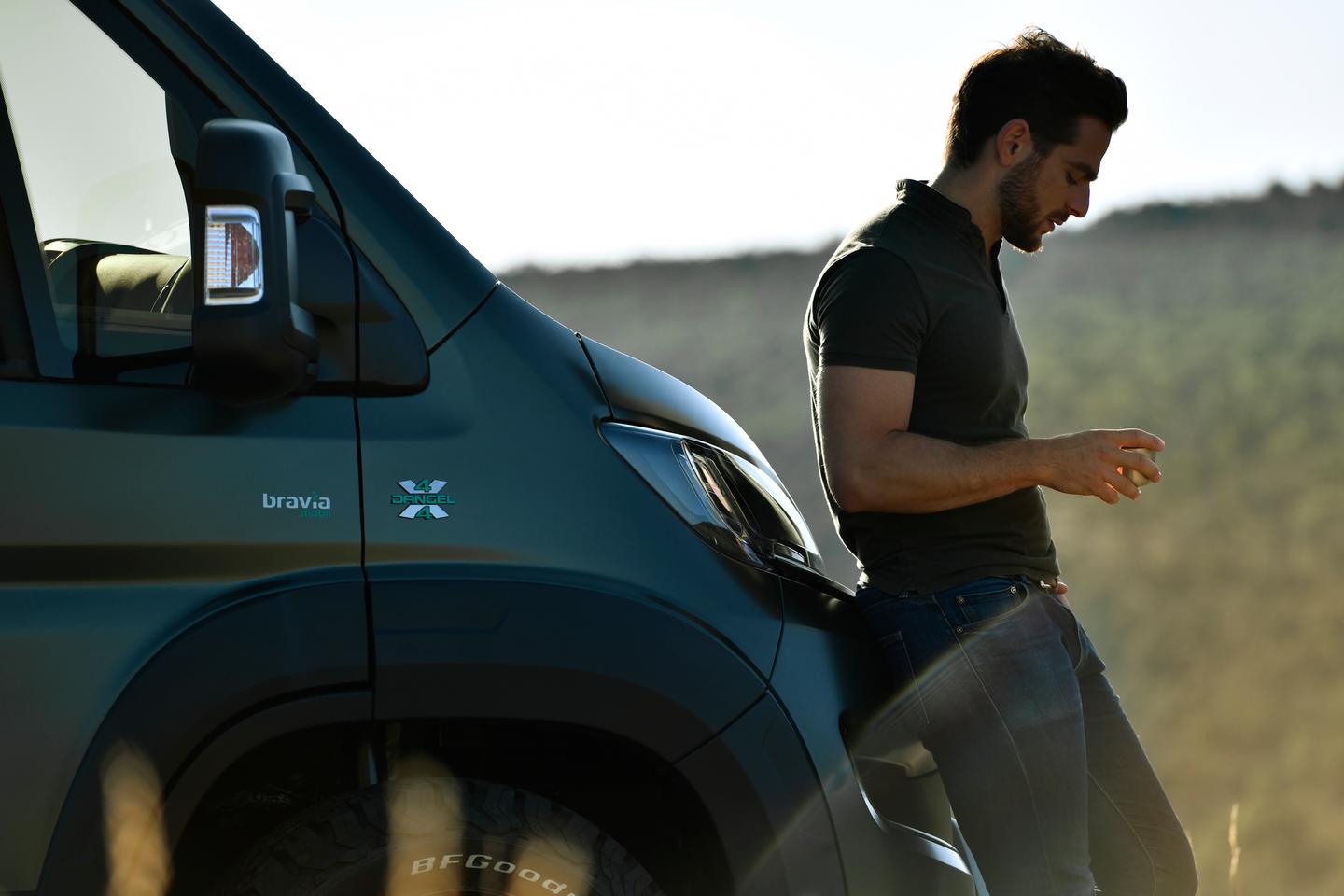 There is, however, one clue as to the interior of this camper that eagle-eyed readers might have spotted. See the Bravia badge on the outside of the van? For those of you that aren’t familiar with Bravia, they make custom interiors for campervan conversions, and most of the vans that they work with are (you guessed it) Peugeots. We’ve done a bit of trawling over the internet, and it looks as though the interior of this Peugeot Boxer Camper could be one of Bravia’s newest projects.

The size and width of the vehicle make it big enough for the features that you would find in the Bravia Swan 599 range, which confirms the suspicions that this camper has a rear double bed and a folding bed in the front of the vehicle. If we are dealing with the Swan 599 interior package, then we could expect to see a built-in wet room with the usual toilet, sink, and shower combo, and all of the usual suspects in the kitchen area such as a spacious cooking area, a sink, a large fridge for those all-important ingredients for your favourite vanlife recipes, and a dual hob burner for whipping up meals. We can also imagine that a heating system will be installed, but it’s unclear a to whether this would be a gas or diesel furnace at this time. 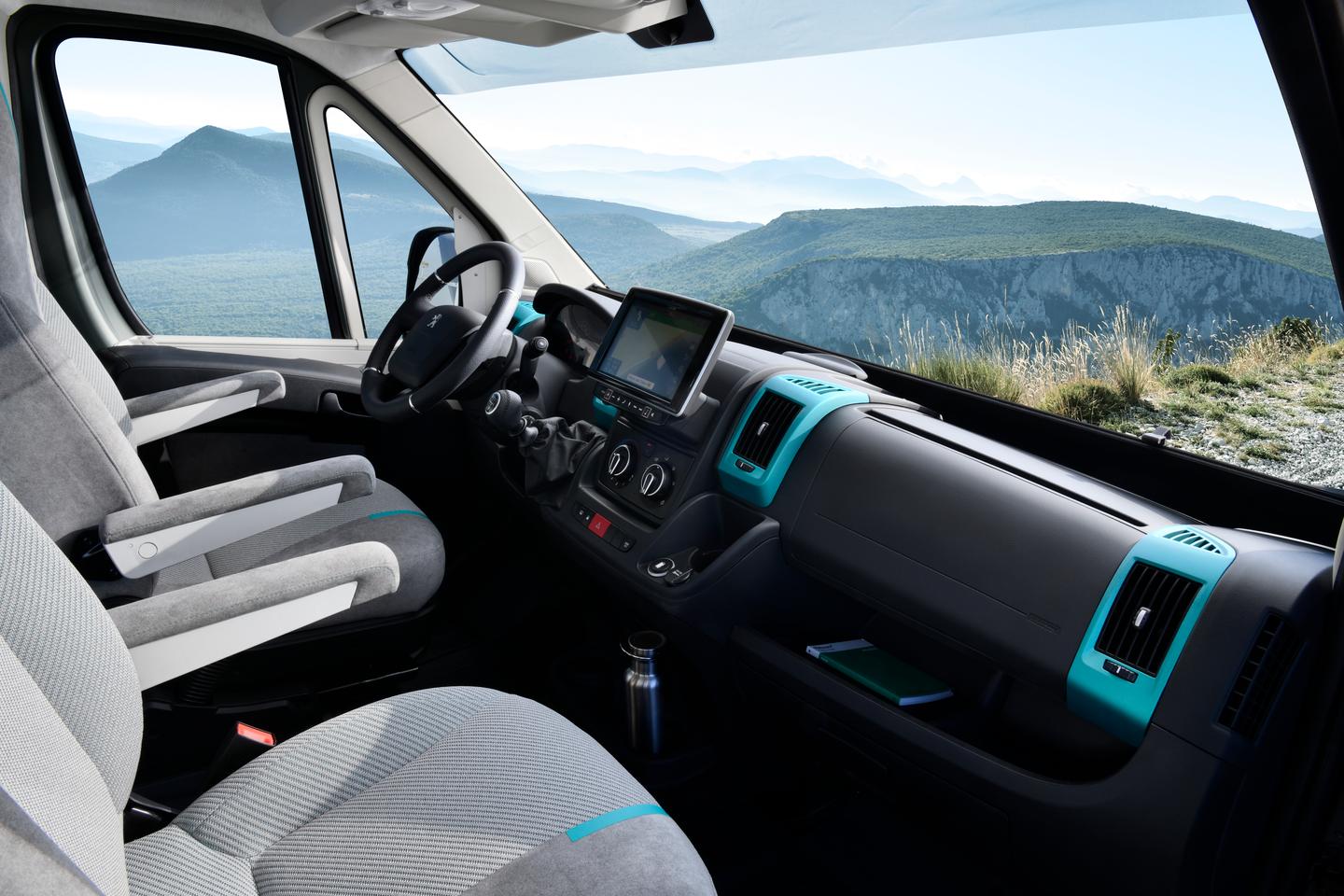 Up in the cab, we’ve spotted a new looking Sat Nav system that Peugeot have collaborated on with Alpine. It’s being praised as a more motorhome friendly navigation system in which the user can input the height and length of their vehicle so as to avoid tight roads, low bridges, and hard-to-reach camping spots. I’ve had these features on my TomTom Go Camper for some time now, so it’s not exactly ground breaking stuff. The fact that it comes with the vehicle is a nice feature, but if you’re planning on going off road in this 4×4 camper, then I don’t think narrow streets and low bridges will be much of a problem out in the wild.

I for one think that this Peugeot Boxer Camper is a nice piece of work, specifically in the attention to detail in the design and the basic necessary features that have been included to make this an off-road vehicle. It’s taken all of the elements that worked in the 4×4 Rifter concept and upscaled them into a large panel van, bringing Peugeot into the gear haulier overlanding world alongside companies such as Storyteller Overland, TouRig, Van Do It, Outside Van and many more. The question is though; will the inside match quality match the brilliance on the exterior?

We often see show vans that look impressive on the outside and then fall flat of the mark when you step through the side door, and that’s what I’m worried will happen with this Peugeot Boxer Camper. If Bravia included their popular Swan package in the build, then that might be the saving grace, but will it be enough to compete with the companies that make Overlanding vehicles day-in-day-out? Outside Van have perfected their formula in their vast range of vans, and with a lack of t-track or the bike-frame locking system that you would find in Nomad Vanz campers appearing in this Peugeot build, I wonder if it has what it takes to enter and make a name for itself in a market that is already underway and leaves the unimaginative and unprepared behind. Only time will tell, and we will be sure to let our readers know as soon as we get more information on the interior of this camper. For now, just imagine cruising down the river in that cool looking canoe, and pray that this Peugeot 4×4 camper doesn’t end up a certain creek without a paddle.