What is it about small travel trailers that we find so downright appealing? Is it the fact that they come in so many different shapes and styles, or do we just love the immediate portability and having the ability to set off on an adventure at a moments notice? Whatever the reason, micro campers and camper trailers are becoming more and more popular with vandwellers all over the road, coaxing people away from living the van life and moving towards a simple, smaller trailer life. If you’re in the market for a tiny trailer and don’t know where to start, then we might have just found the best lightweight trailer on the planet. Weighing in at 300lbs, this trailer can be towed by everything from an adventure bus right through to the best eco campervans, and the design is pretty exciting too!

Do you spend your afternoons daydreaming about Full Time Van Life? Does worrying about Van Life Costs keep you awake at night? Head over to our Van Lifers and Weekend Warriors Facebook Group and join our ever-growing community of van life enthusiasts from all over the world. Join the conversation on the worlds best van life travel spots, find out what it takes to become a weekend warrior, and discuss the many reasons why alternative living rules!

So far on our extensive travels through the ‘Motorverse’, we’ve had the pleasure of meeting the EarthRoamer Camper and the EarthCruiser, two of the planets gnarliest off-road vehicles. While today’s trailer might follow a similar theme with it’s name, it certainly isn’t anywhere near as heavy or as pricey. The Earth Traveller is the best lightweight trailer that we’ve come across thus far here at Van Clan, and it could be the very solution that you’re looking for. So, without further ado, let’s take a look at this mighty micro-machine and see what it can offer!

Is The Earth Traveller The Best Lightweight Trailer On The Market? 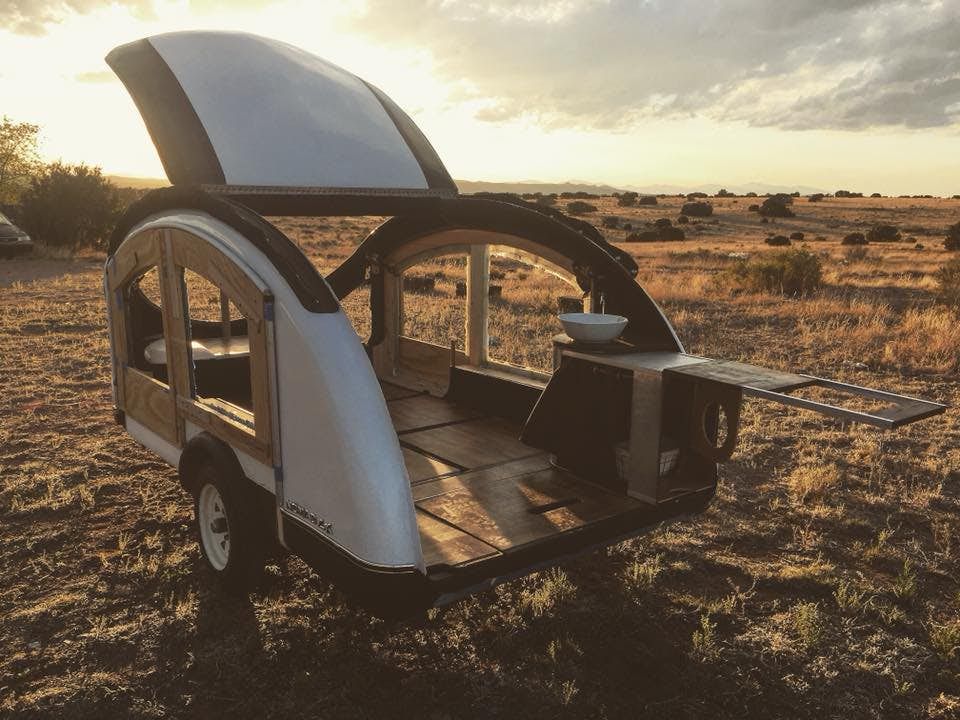 Here it is folks, a futuristic off grid trailer that can be towed by everything from a Mini Camper to an Off Road Bus. It can sleep up to four people and certainly has no problem bringing nature right to your front door. Initial thoughts after seeing the Earth Traveller for the first time are that it closely resembles some of our favourite teardrop trailers, but a closer look shows that this camper is far more suited to the off grid living enthusiast who favours a minimalist lifestyle. If it’s a luxury trailer that you’re after, then look away now. But, if you want to embrace a lifestyle without modern technologies and unnecessary stresses, then you may have just entered alhalla.

Tell Us More About The Earth Traveller! 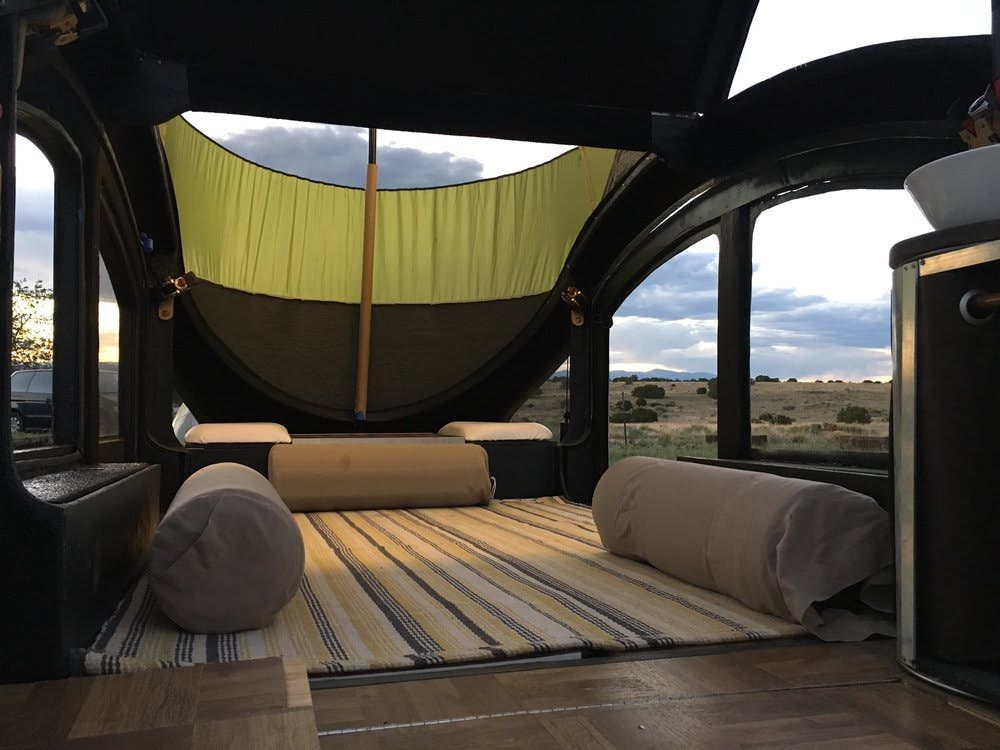 As you’ve probably already noticed, there isn’t very much inside this camper. are no comfortable feather bed or movable captains chairs, but it does turn any forest park spot into an extension of your living room, which gets full marks from me every time. The Earth Traveller may well take the accolade of the Best Lightweight Trailer in the world because of the clever usage of composite materials that make up the internal skeleton of the camper, one of which will blow your mind

The Earth Traveller is the brainchild of Artist Angel Irlanda, a trailer enthusiast who wanted a camper that he could pull behind his trusty Fiat 500. If you’ve spent any time in Northern Italy, then you’ll know that these little nippers are everywhere and are relied upon by many to reach some of the more out of the way villages and towns up in the Ligurian hills and beyond. They’re off-road vehicles, but they aren’t very heavy, which means that Angel certainly had his work cut out for him when he set about making a trailer that wouldn’t drag him back down hills or cause problems going around bends. After designing a prototype from wood and fibreglass, Earth Traveller  now putting plans into motion to create two streamline teardrop campers that will rocket Angel’s original concept into the stratosphere.

What Is The Earth Traveller Made Of?

The Best Lightweight Trailer on the market needs to be made from some seriously sleek materials. The first Earth Traveller model, the T250LX, will be made out of super-streamline Carbon Fiber and sleep four people incredible comfortably. This model will be even lighter than the second, cheaper option, weighing in at an astounding 212 pounds. I reckon me and a couple of mates could probably lift this up and carry it if anything happened with our tow-vehicle, and we have no muscles whatsoever! 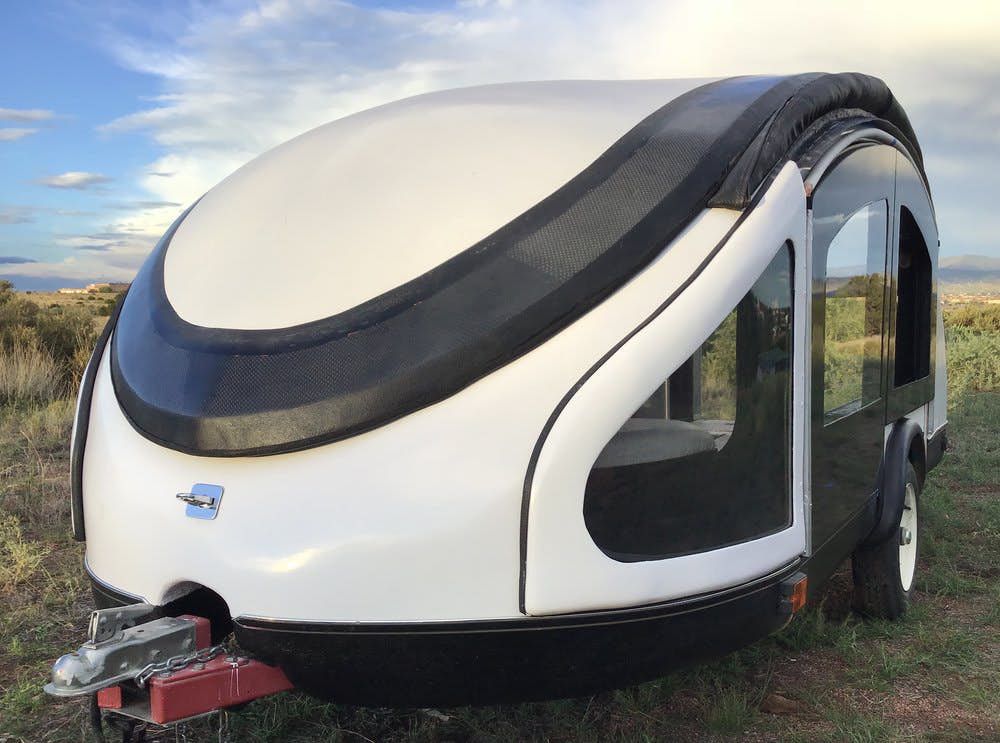 The second Earth Traveller camper and the one that we think that you will find to the most is the T300. It’s made from a composite that comprises of chicken feathers and resin. That’s right; chicken feathers! Feathers are great for insulation, and I’ve never seen a bird that’s been unhappy after flying around in cold and wet climates. This material combination makes the Earth Traveller great for use in all weathers, and because of the inexpensive materials used in the process, this 298lb camper will only cost around $10’000.

Let’s Take A Closer Look At The Best Lightweight Trailer On The Market!

I think that we can all agree that this will be the best lightweight trailer on the market if Angel’s vision does finally become a reality. My favourite travel trailer, the Pika Timberleaf Trailer, weighs in at just over 1000lbs, so you can see just how light and easy-to-transport the Earth Traveller will once completed. 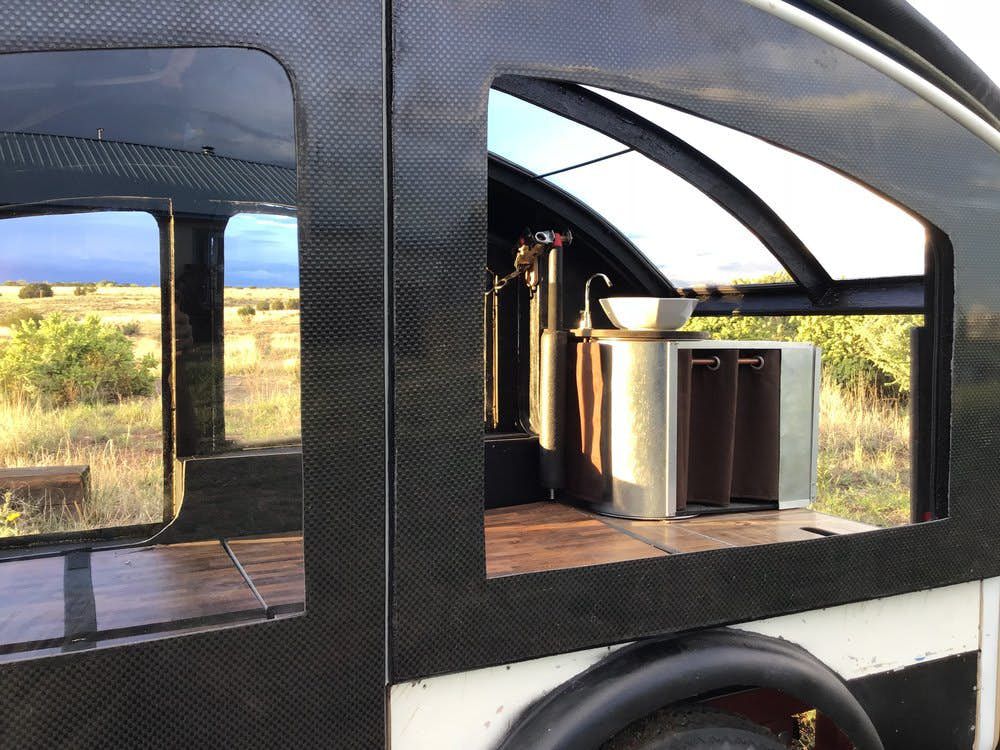 The Earth Traveller doesn’t come jam-packed full of van life essentials like some of the other campers that we cover; it’s an open-plan living space that features a place to sit crowd legged and eat (which also looks like an area that you can sleep in), and although the little kitchenette that you can see in the picture above doesn’t come in the base package, you can always purchase it as an add on along with UV Awnings and offroad accessories. If you have some of the Best Campervan Cookers at your disposal, however, then portable cooking doesn’t have to be stressful or difficult.

The Earth Traveller has a lot of windows to let in air and natural light, but if that’s not enough, you can open up two hinged panels that open out like a Delorean to let all of the sights, sounds, and smells of nature into your towable tiny home. It’s the perfect trailer for anyone who hauls around adventure gear while living off grid as there’s so much space inside, although you might need something a little heavier than a Fiat 500 for that

How Does The Earth Traveller Sleep So Many People? 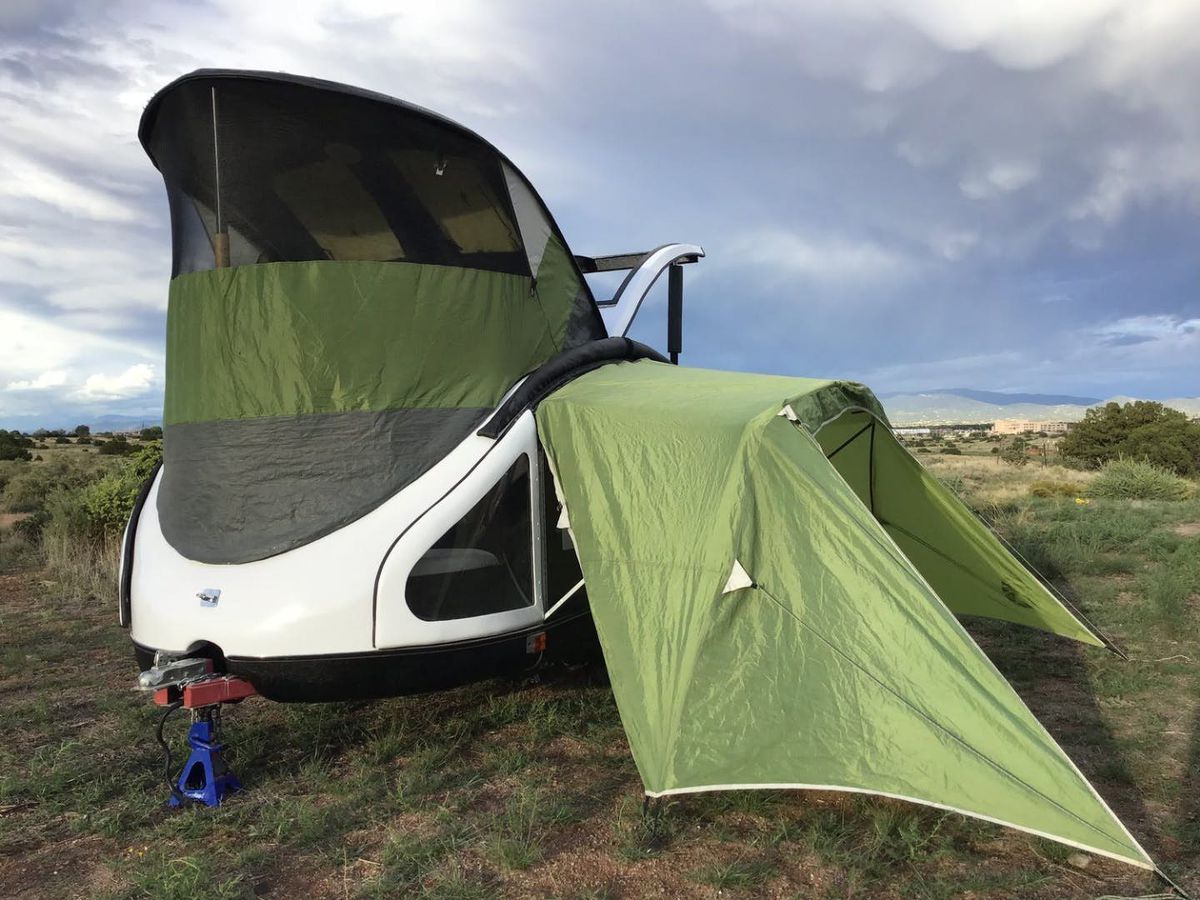 With the roof open, a mosquito net can be installed to create a bite-free-zone while you’re making use of that extra headroom. Because the camper itself is so spacious inside, we can’t see any problem with sleeping four people in the main living area. You might be sleeping on roll mats instead of memory foam mattresses, but in all honesty that’s probably better for your back at any rate. Compatible tents can be added on to the side of the trailer itself to create further rooms for sleeping and/or relaxation, and if it’s warm enough you could even throw out a tent hammock for any other friends or family that want to come along for the ride.

The Earth Traveller takes some of the simplistic ideas that I love about the quintessential Japanese dining experience and implements them into a towable camper. I like the idea of everything sitting cross-legged on the floor and eating together, chatting about the day’s adventures instead of pressing their noses up against computer screens or mobile devices. The interior space is very tranquil and relaxing, and I’m a huge fan of the minimalistic feel that this camper brings to the table (that’s just a saying; there is not a table in this camper.)

This camper isn’t immediately suitable for the Digital Nomad who likes to work on the road, but you could add a solar package very easily or even take along a portable power station like the Jackery 500 Explorer on your adventures. The Earth Traveller is cheap, it’s light, and it’s one of the most innovative designs I’ve ever come across in all my time at Van Clan (and I’ve written about a heck of a lot of trailers!). Chicken feathers to be the craziest material to use to make a camper, but I can’t argue against the logic, and it will be a very impressive feat of engineering if all goes to Angel’s plans.

The question still remains; is this the Best Lightweight Trailer on the market? My answer is yes and no. I know; that’s a complete cop-out answer, but just hear me out. On one hand, this is the Best Lightweight Trailer out there because it’s innovative and the complete opposite of all of the bulky campers that we cover. I’m amazed that the T300 weighs in at 298lbs and even more in awe of the Carbon Fibre model being just 212lbs. But while thee models might be the lightest on the block, they’re only suitable for people who don’t need to live with mod cons or electrical devices. For someone like me who works on the go and has to charge up cameras and store equipment, it isn’t a very good option. I would have to go for something in the 1000lbs weight range such as the Sherpa Trailer or this lightweight SylvanSport. I like the idea of living with so little, but I don’t think my lifestyle would allow it.