Have you ever looked at a sturdy, army grade jerrycan and wondered what it would be like if you built a travel trailer out of it? That’s exactly what Romanian-Bucharest based company ‘FIM Caravans’ have done with this brand spanking new Off Road Camper Trailer. We cover many rolling tiny homes here at Van Clan, and many of them are suitable for taking on an off grid adventure. But one thing that a lot of the off road trailer products lack is a rugged exterior as well as a comfortable interior. You never usually see the luxurious features of a teardrop trailer inside a military-style camper trailer, until now that is!

Are you a Van Lifer or Weekend Warrior? Head over to our brand new Facebook Group!

Meet The Off Road Camper Trailer That Combines Comfort, Strength, And Style

FIM Campers certainly know how to make a good looking product; just take a look at this futuristic off grid trailer and tell me that you don’t like it? Ok, maybe I’m getting a little bit ahead of myself; not everyone views off grid living as though it was a dystopian world where a tiny trailer is the only way of surviving. But, if your idea of top campervan gifts is giving a loved one the best survival kit on the market, then this trailer will be right up your street.

Show Us The Outside

Looking like a cross between a space pod and the super hard grass Pokemon Metapod (google it), this off road camper trailer boasts a lot of features for such a compact camper. Named the ‘Migrator’, this off grid trailer has spent two years in the design, prototyping and testing stages to make sure that it was ready for anything that nature could throw at it and was finally released last year. 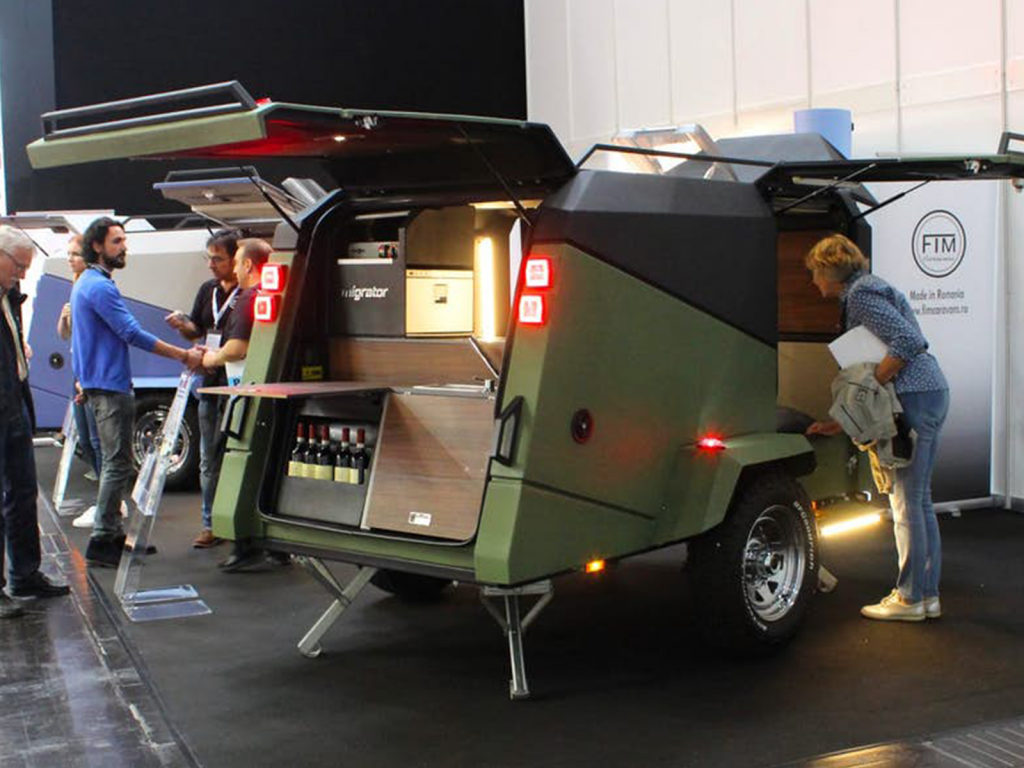 The Migrator off road camper trailer comes with an axle-less suspension system and ‘corner steady’ technology, making towing a breeze no matter what terrain you’re driving along. It’s made to be towed by ay kind of vehicle too, so it doesn’t matter whether you own one of our top eco campers, a Volkswagen bus camper, or a monster camper like the Ford Earthroamer, the Migrator will almost float along behind you as though it were made of air (military-grade, super hi-tech air though). With enough space for roof racks, extra solar panels and even surfboard storage on the roof, the Migrator really does provide an ‘everything under one roof’ style of living (or ‘on the roof’ as the case may be).

FIM Caravans have made sure that this off road camper trailer is perfect for extreme temperatures at both ends of the thermometer, putting the Migrator through rigorous testing in both cold and hot environments to make sure that it still provides a comfortable living experience for the owner. I like it when companies go the extra mile and put thought into their products like this, as it means that they’re tapping into both the long term vandwellers and occasional weekend warrior markets too. FIM’s slogan is ‘one caravan, multiple choices’, and they’re certainly living up their motto so far! 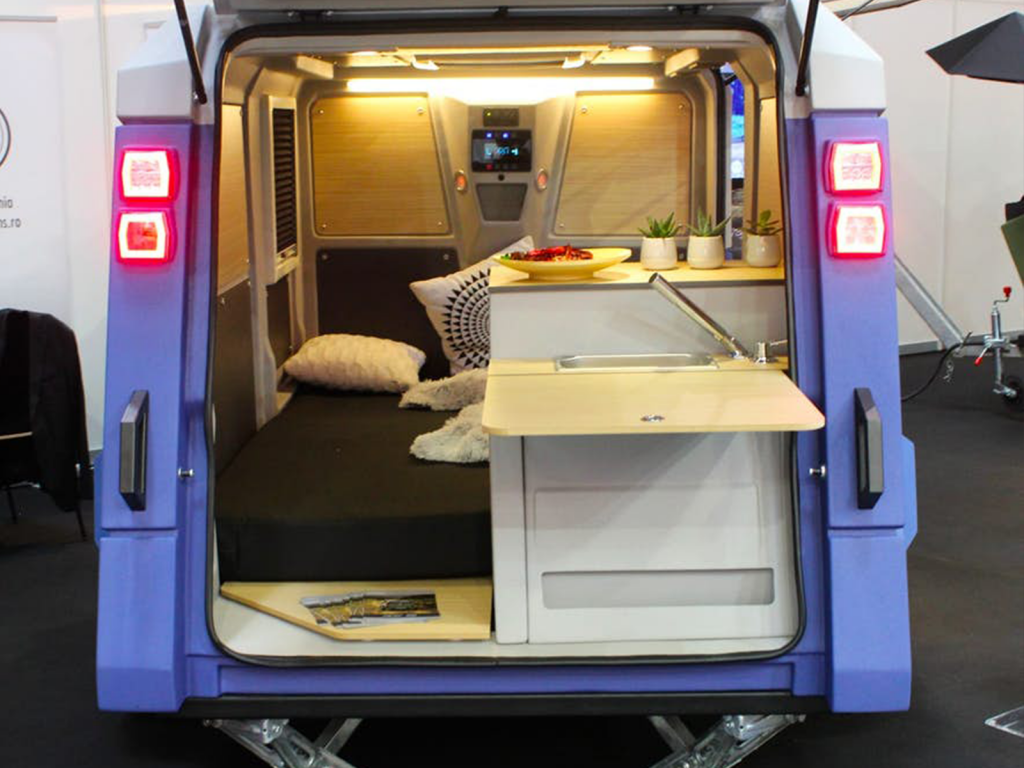 What’s Inside This Off Road Camper Trailer?

The inside of the Migrator is spacious, clean, and comfortable looking, albeit a little dark. Most of the light comes from the soft LED’s in the roof rather than through windows, but then I suppose that you have to make some compromises if you want an off road camper than can handle the apocalypse.

The interior living area can sleep two people comfortably without feeling super cramped and measures 1.4m wide x 2.0m long x 1.2m high. If you’re a family looking to head out on the road, then you might need something a little bigger like this Airstream Trailer, but if you’re a solo female vanlifer, an off-grid guy, or a couple on the go, then this off road camper trailer will be perfect for your next adventure. 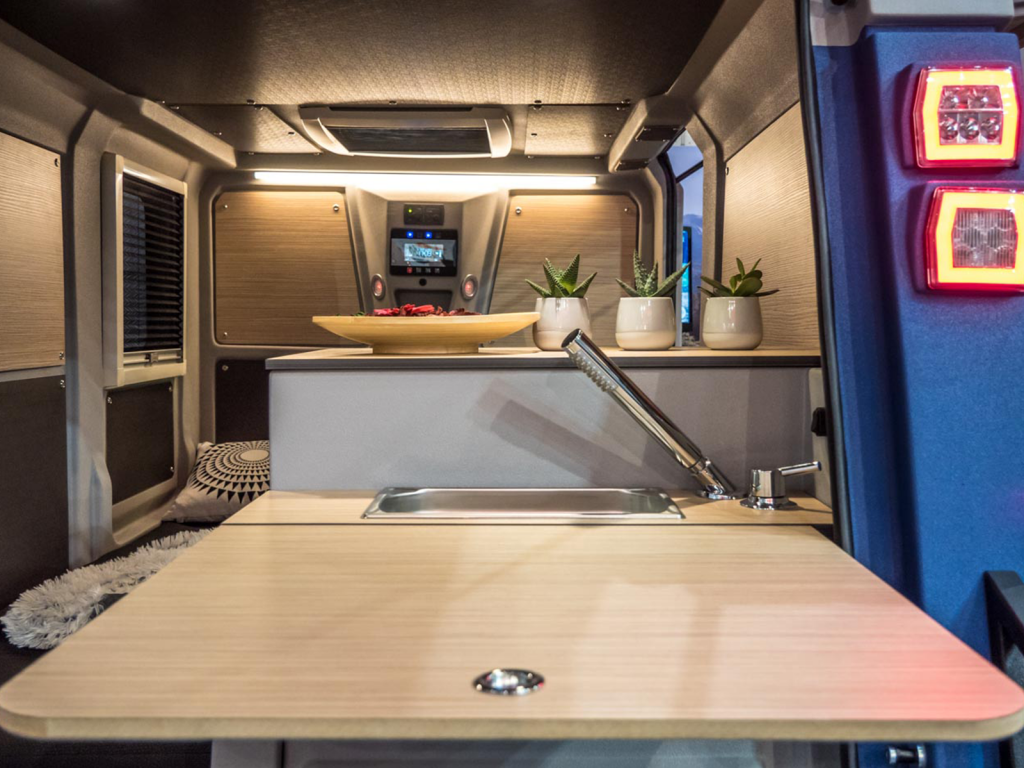 Cooking and washing facilities are stored neatly away towards the rear of the vehicle, allowing for cooking indoors if the weather is bad and outdoor food prep when you want to bask in some golden rays. There’s space for all of your top cooking accessories, as well as a flip up table that could even turn into a stand-up smoothie or breakfast bar. The pictures that we’ve seen also show a large fridge and a secret compartment for wine and beer; it looks like the guys and girls over at FIM Caravans know how to have a good time! You’ll also find a 12L water system with a pump, and an onboard shower too!

Can I Charge On The Go?

The Migrator is perfect for the digital nomad who likes to travel, providing several USB charging slots as well as charging facilities for your camera and laptop batteries thanks to the 100AH Gel-electrolyte battery system. Twin that with a portable solar charger and some of our best power banks and you won’t have to drive anywhere near a campsite ever again on your travels! 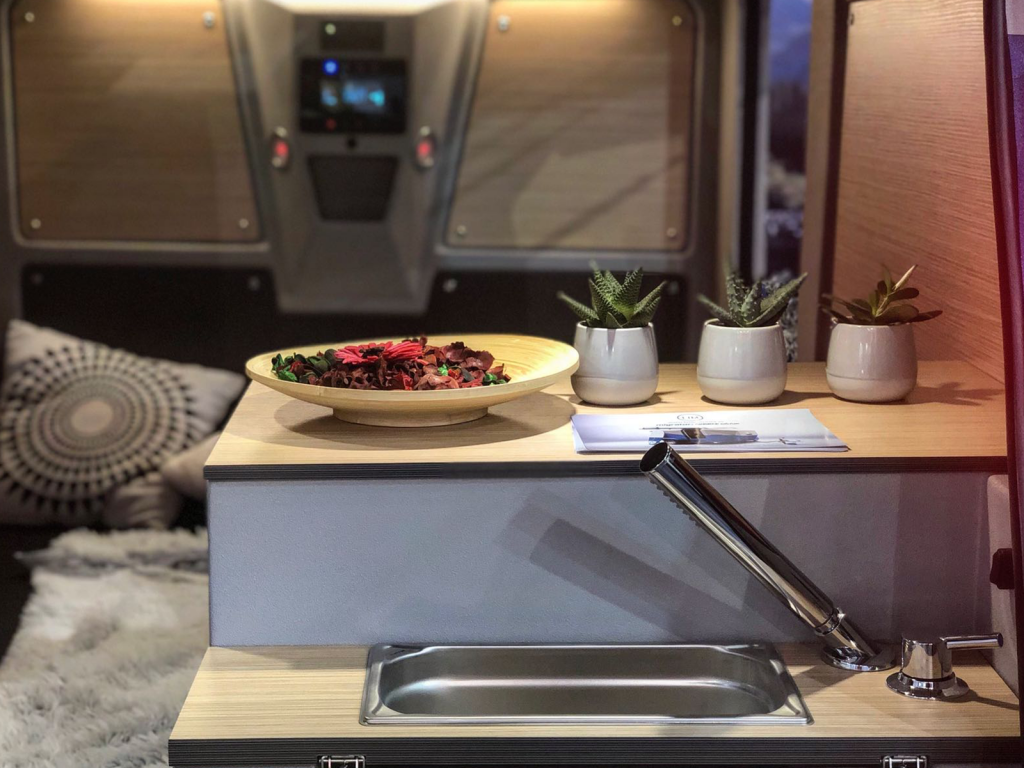 This off road camper trailer also has a cool interface screen which allows you to keep track of all of your charging needs, and it also comes with the optional extra of a diesel heating system to keep you warm on those chilly winter nights. We don’t know this for sure, but most diesel heating systems also have a fan setting too, which would be great for keeping you cool in the summer too!

If you’re after a tiny eco house like the Timberleaf Pika, then this probably isn’t for you. While it would still fall into our list of eco campervans, the Migrator is more suited to those campers who love to find parking spots that are well off the beaten track in hard to reach places. It’s well built, incredibly robust, and comfortable enough for a long stint of off grid living.

I like having a window in the roof to be able to look up at the stars, but this isn’t a massive problem as you have two doors to look out of if the feeling takes you. Prices start from just under €16’000 with dealers in nearly every continent. Head over to FIM Caravans to find a dealer and to purchase a off road camper trailer today!